We spend the day deep in the clay

Probably it will be the shortest Chapter in my story for waking up in the morning we saw that the sky was zavoloklo clouds and a very fine drizzling rain. Sunbathe failed!

We spent almost the whole day in the tent. Rinat mostly slept.
For sore feet this was just what we needed.
The rain was periodically stopped and started again.

For dinner we found that the food supply is nearing its end.
We had to go to the nearest village for groceries. Marat at that time was the most cheerful of us.
It is not surprising that he went.
Nearby was the village of thunder.
Okunivka , which we passed earlier was away. Marat left at two. 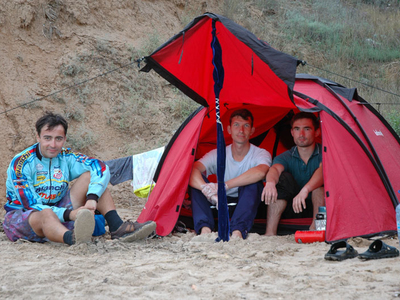 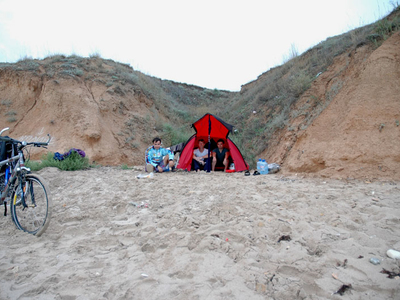 As you probably guessed he did not appear in an hour or two.
He came through three and a half hours.
Or rather he did , dragging a bike that was a piece of clay mixed with grass, which here and there casually, shining metal tube.

He said that to go on the road was almost impossible - the dirt sticks instantly (and that's with his slicks!), clogged brake pads and switches.
He tried to go on the grass, but this led only to the fact that grass joined the clay.
Had to move in fits and starts , periodically cleaning the bike.
Besides, the way he broke the camera and had some time to change it.

When he reached the asphalt and came to thunder proved that there is no grocery store because it is Sunday!
He had to return to the Okunevka and there to buy food. And then to travel back.

Marat throwing food to us was to wash the bike in the sea!
And it was a big mistake (including mine - I didn't stop him).

Salt water, as it turned out, has exceptional oxidizing power.
Bike Marat by the end of the hike was bad DVto hatsa. He even flakes on the wheels from the inside covered with a layer of Terry rust!
Cables the shifters and brakes clogged with earth, and he subsequently had them all replaced.

In total, this trip cost him a lot of trouble.
In fact he heroically suffered for all of us.
But as they say, would know where to fall - the grass would spread. 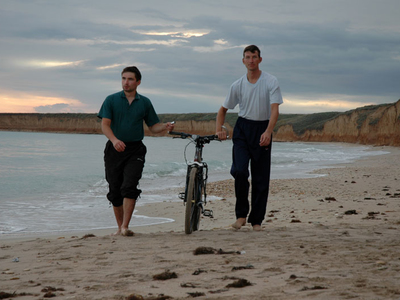 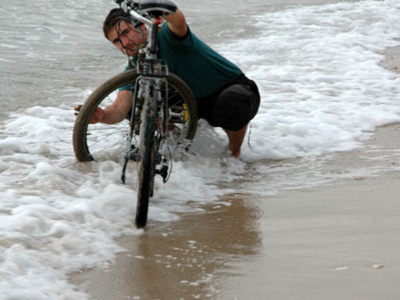 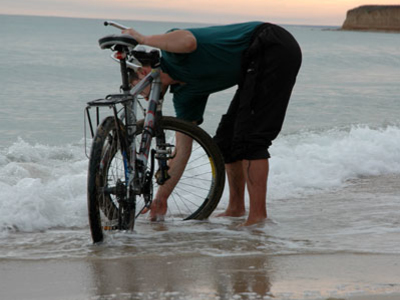 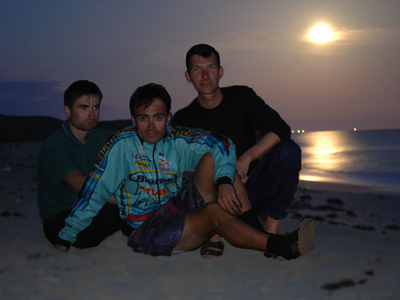 By evening, the rain stopped. And the sky started to brighten.
To clay cliffs it was better not to touch - they turned into some giant Velcro!
The ubiquitous clay clung to everything that can be , like a gum ,chewed diligently some sort of giant, and carefully laid out along the shore.
After the week our tent was badly polluted from the bottom.

Thanks Marat we had nourishingly supper , cook on our multifuel burner, buckwheat porridge with shpikachki (thick short sausages).

Burner showed itself from the best side.
Only disgusting local petrol all the time can clog up the nozzle and especially at the end of the campaign, Rinat often had it cleaned.
Without it we would be lost:)
Firewood in Crimea, most difficult - especially on the coast.
We walked along a long deserted beach and photographed for the story:)
Rinat long plagued us with his camera, changing angles and lenses.
So I guess Marat is frown.
◄ Prev
Next ►