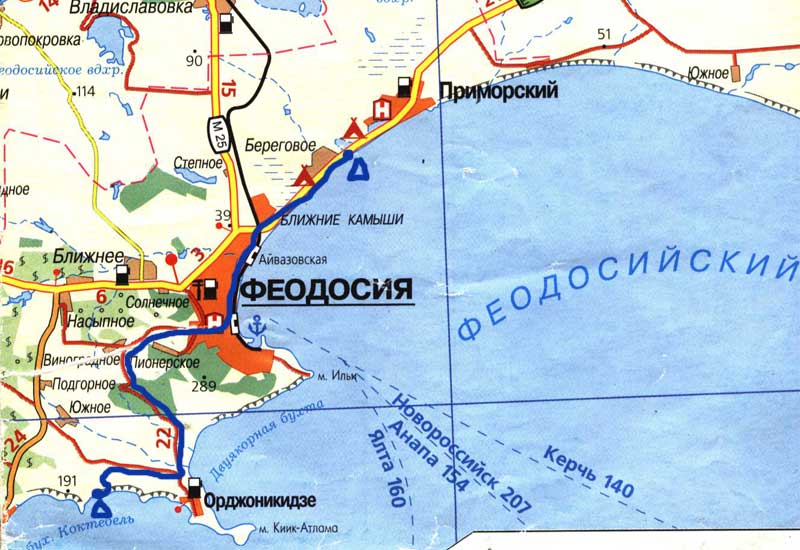 Newspublish absolutely, got up in the morning.
The sun was shining. The weather was gorgeous, but the wind was often strong gusts.
Each gust of wind rained on us a cloud of sand.
To sit impossible. Sand high up.
The food had to cook inside the tent. Very careful not to burn it.
Still, the porridge was mixed with sand. Sand in my mouth, ears, eyes, backpack - sand everywhere. Long we sat and met on the road.

We had past the Ordzhonikidze pass in Feodosia.
There were two ways to cross a 200 meter ridge mountains Dzhan-Matoran(help! if you forgot). Or go back to the track Koktebel -Feodosia and on the asphalt road to get to Ordzhonikidze.
The guys wanted to go, alluding to my mind(or rather its lack) and the famous adage about the mountain.
And I had to make the best of your eloquence and conviction to porosity they all still straight.
In the end we have mountain bikes or what?:)
Marat resisted a little, and ceased. He was the youngest of us, and apparently found what is supposed to obey.
Rinat in his style was indignant but longer and he has nothing left to go after him.

The next hour that we climbed up was filled with groaning, choicest swearing and unflattering epithets in my address. Poor historical character Susanin got the most.
It is essentially quartered, verbal tearing all the limbs. It will probably be superfluous to say that of course I was the personification of Ivan and his ideological successor .

The path really wasn't a Broadway. Narrow, overgrown on the sides with grass. PlacesAMI is pretty cool.
Mostly had to walk. Rinat in one place fell, fell on its side along with a bike.
The bait fortunately not broken, but got a wheel in the eye and came in a permanently bad mood.
But care refused.

Finally ,about a miracle!, we went up to the pass. And our beauty to weary eyes opened on a panorama of Cape-Kiik Atlama.

Clouds swirl in the green depths
Radiant desert sunrise,
Flee and the shadows from the mountains naked
Colors of roses and honey.

Bare precipitous Peninsula ends with Cape far stands in the sea. It is the village of Ordzhonikidze. In translation from Turkic it means the name in different sources of “leap the wild goats” or "dish of puff pastry" - by analogy with the layered cliffs of the Cape.

Until recently, the village was closed for tourists, because in its vicinity was located a secret torpedo factory and testing ground for the shooting missiles. Now the plant is closed.
Plots in Ordzhonikidze bristling with torpedo tubes, purchased on the cheap or stolen.
And in the torpedo tubes gardeners are saving water.

At the bottom of a thin thread wound highway.
Rinat alas did not make a single picture from this point.
In 10 minutes we came down and went to the village.
In Ordzhonikidze just bought food at the store and water.
To stay and not have gone to Feodosiya. The road first goes along the Dvuyakornaya Bay, and then goes into a long stretch of ascent to the ridge Tepe-Oba.

In the end we pedaled already from last forces.
From the top we can already see the city.

Surrounded by high hills,
Sheep you with mountain escapes
Pink and white stones
In the dry clear air sparkle. 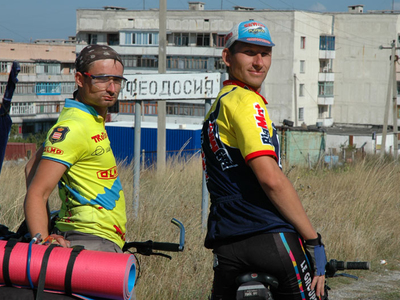 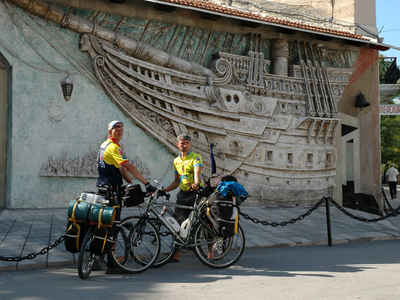 In the late 19th century in Feodosia lived Feodor Siebold, chief Forester of the Feodosian forestry.
The result of his work: the band of forest plantations, looming boldly on the ridge Tepe-Oba is the result of selfless work of those who managed to plant a forest in extremely adverse conditions.

The city's history is briefly as follows:

In VI - V centuries BC. by settlers from the Asia minor Polis of Miletus, there was founded the policy of Theodosius, who soon became an important centre for the grain trade.
In the I century BC after the death of Mithridates VI Eupator of Theodosius in the composition of the Pontic Kingdom falls under the authority of Rome.
The legend says that in the first century ad here was the Apostle Andrew.
In the III century, the fortress comes under the control of goto-Alanian tribes.
Alanian name of Feodosiya - Ardabda (the city of the seven gods).
In the IV century the citadel to destroy the Huns.
In the second half of the XIII century, under contract with the Golden Prince of Oran-Timoroso trading posts built by the Genoese, calling the city - Cafe.
In 1299 in the Cafe killed a grandson of the Khan of the Nogay Horde and the last at the head of a large army falls to the Crimea, ravaging the city so that after this invasion, many of them will never recover.
In the multilingual, the city erected a Catholic, Armenian Gregorian, Orthodox churches, mosques, synagogues and kenesa.
After the inclusion of Crimea in the Russian Empire the city, on the greatest commandment of the Empress is returned to its ancient name of Feodosia.

To Feodosiya was speeding.
The road was smooth and deserted.
The city immediately went to the center. I wanted to show the guys the house-Museum of one of the sathe most of my favorite childhood writers Alexander grin.

On the background of the bas-relief on the wall of the house we photographed.
In the early 80-ies in Feodosia was born the so-called "Grinovsky quarter", when the wall-the Museum has pictorial and sculptural panel "Brigantine".
The centerpiece of the Museum - the spherical image of the city of Zurbagan.
A complete illusion of the city streets rising up somewhere.
Before my eyes appears a fabulous country Greenland. Country where you learn to dream and to love, to pursue happiness...
Because any dream can come true if you really believe in it, not to betray her and not to doubt it.
And let the townsfolk think you're stupid and narrow-minded dreamer is their misfortune, that they are ill.
And so hardened soul and mired in reality that have forgotten how to see beauty in thoughts and feelings!

The writer was born in the family of an exiled pole Stefan Grinevsky.
Wandered in Russia, led a vagrant life, worked as a sailor, a fisherman, washing gold in the Urals, he served in the army, where he joined the party of socialists-revolutionaries (SRS).
In Sevastopol was led by the socialist propaganda, for which he was arrested and convicted. The sentence was served in prison and three links have made shoots, he lived on false passports.
In 1920, Greene was drafted into the Red Army, served under the Pskov.
Sick with typhus, he was brought to Petrograd, and together with other patients have put in Botkinsky barracks. Green was seriously ill and was discharged from the hospital almost an invalid.

Homeless polubolnogo and hungry, he wandered around the granite embankments in search of accommodation, food and heat.
There was a time queues, rations, icy apartments.
Writer Maxim Gorky learned about the plight Greene did for him all that was in his power.
He was given academic Lunches, room on the Sink with a bed and Desk.
In addition, Gorky gave a green job. Often at night, Recalling his hard life and the help of Gorky, still ne recovered after his illness, grin was crying from gratitude.

Since 1923 the writer lived in Feodosia.
His room held only a table, chair and bed. And on the wall against the headboard, adorned with a salted wooden sculpture from under the bowsprit of a sailboat.
The ship's maiden accompanied the writer to sleep and met at dawn.
Gradually, his creativity comes into apparent conflict with ideological attitudes of the party and the green almost cease to publish. In 1930, the writer moved to Old Crimea, where two years later, dying of lung cancer.

He is buried at the starokrymskiy kladbische.
Next to the headstone is a white marble column stands the bronze statue of Frezi Grant, "Running on waves". The stove bench, flowers.
To that grave come writers, come readers from distant places.

Next to the Museum we found a good wine shop.
Rinat bought a certain number of bottles of red wine. He had to appease on arrival home the darkness of the people.
Then we drove along the entire waterfront of the "city color soft watercolors" as it was called by Theodosius green.

For the night decided to stand outside the city in the Golden beach of Feodosia.
For this we had to pedal about six kilometers and drive through the village of riverside.
Honestly it's been naughty.
The track was close to the sea and was separated from it by a narrow strip of beach.
On the other side of the highway was a salt lake Acigol and rare houses.
To go further did not make sense because the next day would still have to go back to fly to Simferopol. We're tired and fell on the sand next to Coca is a fenced section of the beach. 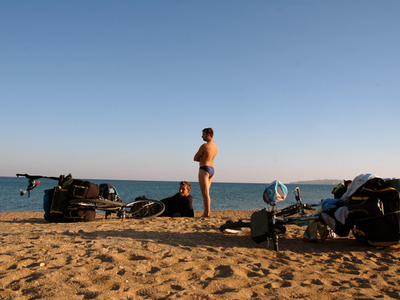 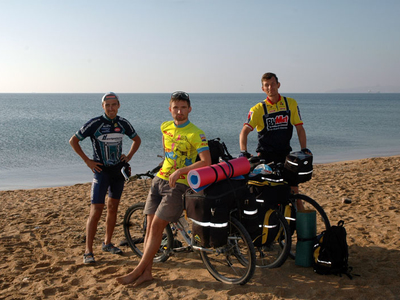 C hour we were just lying around. Despite the fact that the sun was still hot ,the evening cold was taking its toll.
And icy breeze blew goose bumps on the skin.

Marat stomach ache. He became sad and quite silent.
ate packing of activated charcoal and began to wander along the shore.
It was getting dark. Put up a tent without him. Made the soup cans. Ate together with Rinat.

In the distance two women cleaned the carpet in the sand. And then our, our patient woke up basic instinct. Marat walked over to the girls, about something talked to them, put the carpet on itself and followed the road to the houses.

Still doctors have strange approach to their own treatment. With a sick belly to seduce beauties! Aerobatics:)
Fire with fire as they say.

In the evening we were attacked by hordes of mosquitoes.
Such number of nasty itching creatures we have not seen anywhere else in the Crimea. Even the repellent didn't help. They were everywhere.

Our last day at sea came to an end.

Soon there were Marat and, after eating more coal, we climbed into the tent. Said just helped to carry the carpet, he smiled slyly and started to vibrate my lips. Soon Rinat Duo gave a sound "PA".

At that time I did not push them. Just lay thinking about the causes of snoring and clever way of dealing with him, which was invented by the Australians.
They sewed tenisty the ball into the elastic panties from the back and the man is forced to lie on his side.
Much more humane with army way - of old socks under his nose:)

Over Feodosiya faded
Forever this autumn day,
And everywhere the shadows lengthen
Lovely in the late afternoon.
◄ Prev
Next ►