Bad head to the feet rest does not 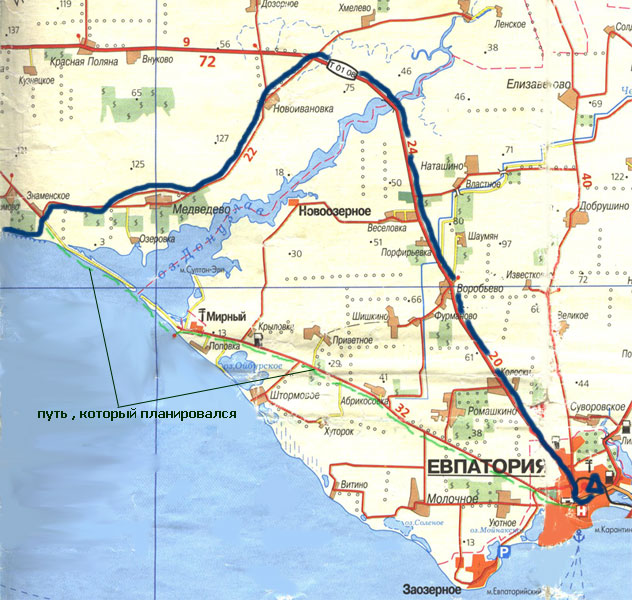 The next morning the sun was out. Rinat almost recovered.
We left a little later than usual , because after the rain the tent is very dirty and we dried.

Marat said that will go straight on to the beach. Up in clay, he will not climb for any price.
So the first half an hour we walked along the shore, dragging the bikes over rocks and dragging them through the huge pile of discarded seaweed. Finally I got bored and decided to try to get out on the hill in the hope that the ground has dried.
And so it proved. However to be safe I was driving down the road. The guys didn't believe me and for some time we went(I'm on top,they are at sea).

But then still United.

Ahead lay a unique lake Donuzlav, which one end was connected to the sea.
Before there according to eyewitnesses was the ferry.
But now it seems like it wouldn't work.
At least, we were told the locals of those villages which we have passed.
It was very sad as greatly extended our way.
The lake had to go around. 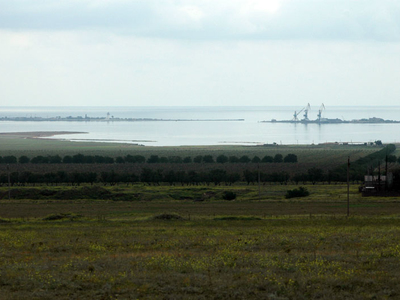 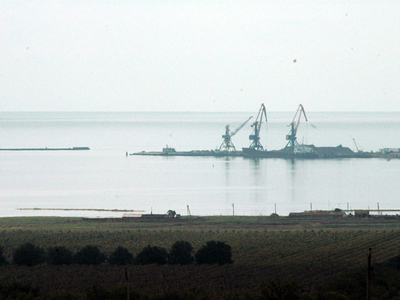 Elongated in a North-easterly direction Donuzlav has the large area and is the deepest lake of Crimea.
The name could be preserved of the Scythian times, because in the North-Iranian languages "don" means "river".
Donuzlav may be translated as the boar river. 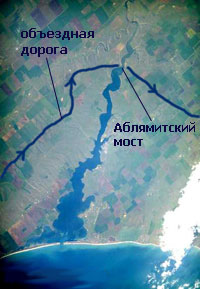 In its origin Donuzlav - Bay, separated from the sea 9 km-long sandy spit with a width of 200-600 meters.
The height of the sand bar is very small; therefore, using it during strong storms the waves roll.
The area of its water surface is equal to 47 km , length - 30 km, maximum width - 4 km and its maximum depth reaches 25 m. It was formed at the bottom of the beam, flowing here into the sea.
At the end of last century (1874) there was a Strait through which the lake was connected with the sea; Then the Strait completely silted up.

In 1961 in an extremely convenient Bay Donuzlav was based of the black sea fleet (now the Naval Forces of Ukraine).
Through spit for six months they dug a channel for the passage of ships and dug to the bottom of the lake, the navigable channel.

This resulted in the suspension of traffic on the highway Evpatoria — the black sea.
Was built the bypass road, which went East, crossing the Donuzlav where it is narrow, shallow and may not be navigable through Alenitsky (another name taken at the cards, "Islamici") bridge.

On the satellite visible and the fairway (dark strip of deep water against the lighter surroundings and the bridge). 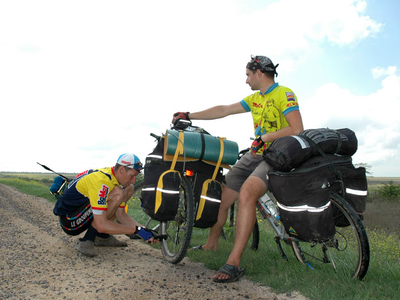 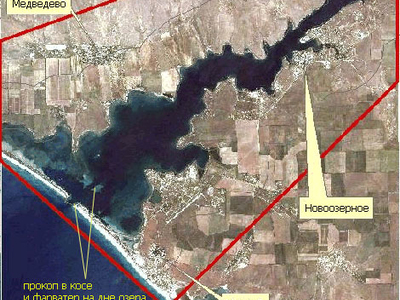 Now began to implement the project shifted part of the civil Evpatoria port in the lake.
After the completion of each part of the port of Odessa will be twice as long.
Also plan to build a railway line Yevpatoriya - peace (a settlement on the southern part of the lake).

We were on our way to the village of Znamenskoe which went the road to the spit across the lake and to detour him.
I was going for a bit and then heard a thin squeak whose source was unclear.
When we bez adventure and ,almost without contaminating the bikes, got to him it turned out that the ferry still operates.
At 8:00 and 19:00 there is a boat. Like it or not we did not check the time it was nearly ten in the morning and wait until evening, we did not.

Shop around where to buy drinking water, I found the cause of the difficulty.
Trunk Rinat was in a terrible state. Cracked tube frame and break a plate mount to the bike in a horizontal plane.
Still Tarkhankut didn't want to let us go without loss:)
Luckily had a spare plate. And crack aluminum frame was uncritical place.
We examined every your trunk just in case.

Set off to drive around the lake.
It is always necessary not to be lazy and to interview the largest possible number of people.
It was the third deviation from the planned route.

First, Medvedevo and Novoivanovka we reached the Federal highway to Evpatoria.
The road to the highway fairly deserted. And not video - constant ascents and descents.
From one of the hillocks photographed the panorama of the lake.
It is clearly visible a narrow strip of water between the two braids, connecting Donuzlav from the sea.
The weather was very pleasant. Small clouds and not hot.

On the track, the cars were much more.
The road goes downhill all the way to the dam across the lake. And then a steep climb.
After pajama we stopped to take a breath and pump up wheels.
To Evpatoria stopped only once - in the village vorobyevo for lunch.
At a roadside cafe and ate soup and pasties (very decent).
Rinat bought milk in a private home.

On the highway we were going quite smoothly - at a velocity of about 25-28 km/h
Even my goof Schwinn peals:)

Viejas into town, found the post office. Marat and Rinat went to call home. And then I went to the Internet center to send letters.
While I was sitting at computer ,Marat finally bought a local sim card for a cell phone.
And for some reason, Kievstar is not the cheapest operator in the Ukraine - although this has been mentioned what are we going to buy jeans.
But Marat went into some nevmenyaem state and the question of why he did so convincingly invariably replied: "Remain me"
Had to buy the same SIM card as for negotiations with each other so it was more profitable.

Driving along the embankment of Yalta, we went in search of housing.
On the way he met a lighthouse Keeper which I have already mentioned.
And accidentally found Evpatoria Cycling club. Met local bikers.
Looked at their shop. They shared their problems with us.
Marat in the store that was around, finally bought myself a new foam.
All the previous days we had to sleep on two. 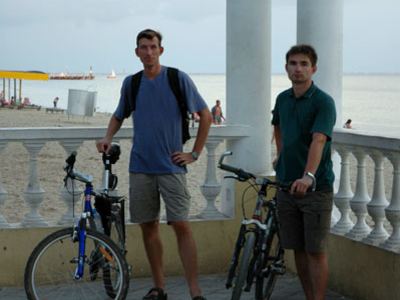 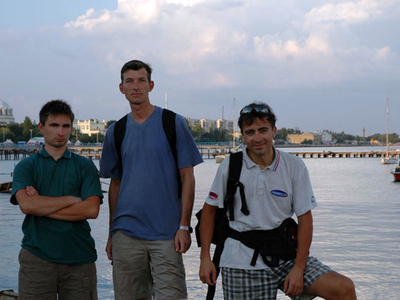 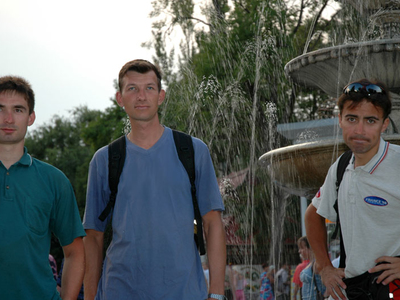 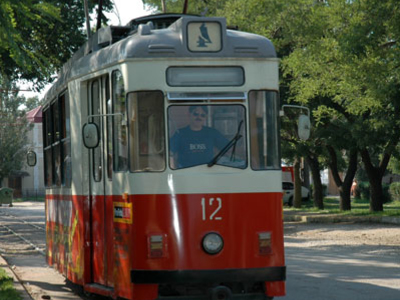 Directions on the outskirts of Yalta about an hour, we finally found quite a decent accommodation on the day for three dollars per person.
Located, washed, and washed.
And in the evening light on the bicycles we have plenty of dashed off through the city and had dinner at a seaside restaurant.

Evpatoria has changed in 30 years, when I first was there in childhood.
And only an old German trams all also running around the city.

The city was founded in the 6th century BC by Greek settlers and was called Kerkinitida.
Its history goes back 2500 years. In the middle ages was called Gezlev during the Turkish rule.
His territory was a well-fortified fortress and a major trading port.
After the annexation of Crimea to Russia in 1784г. at the behest of Catherine II the city was renamed Evpatoria.

It is situated in the steppe North-Western part of the Crimea and stretches along the shallow Kalamitsky Bay for many miles.
Golden sand, shallow sea bottom, warm and Proillusive water have created the glory of Yevpatoria's beaches as one of the best in Europe.

This is one of the sunniest cities in the Crimea.
Around the city of lakes-estuaries, which lie at the bottom of the mud.

Special natural beauty around me. And to relax here for a long time probably boring.
Although parents with kids -freedom.

Having tasted the delights of the night Yalta and knock the crowd of tourists, we sent the wheels back to the house for the night.
◄ Prev
Next ►