Cycling / Journey to Grenlandia / Shower on the White mountain

Shower on the White mountain 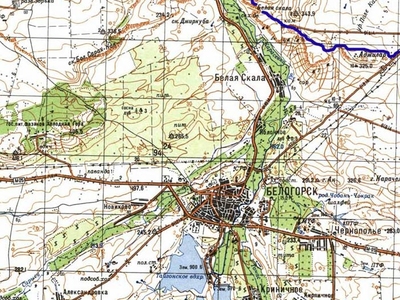 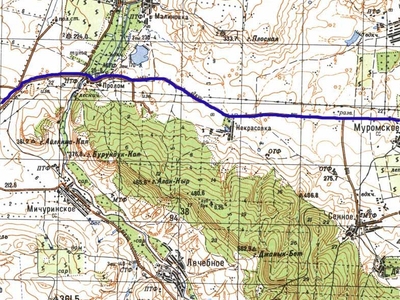 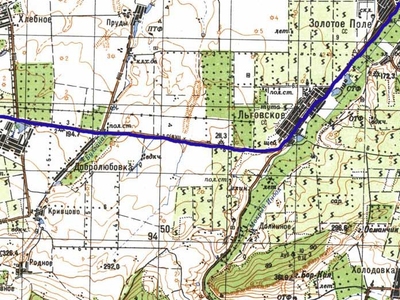 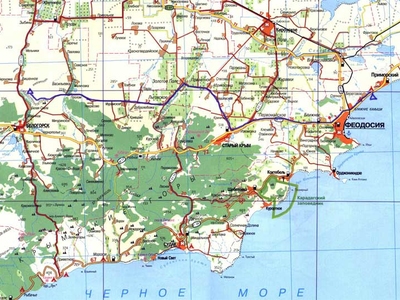 Got up early. Slept poorly due to noise on the highway passing cars.
The morning was foggy and cool.
And consciousness the last time we see the sea not added mood.
Hastily eat and a swim finally, we saddled our rosinante and moved back to Feodosia.
There were many kilometers from the destination that day - the town of Belogorsk.

To Feodosiya has quickly quickly. Toured the town on the bypass road and the highway Feodosiya-Sevastopol went to the side of the Old Crimea.
For 30 miles the road stopped only once before Izyumivka. To breathe with the help of yogurt and rolls. I could not resist and bought grapes and apples.
In the end, in the Crimea, we, or where?
Marat went quite strained. Looks like after last night's poisoning, he is quite weak.
We also tried to spare him and not to drive too fast. However Rinat, it's always turned out badly.

After the Old Crimea - the ancient capital of the Peninsula there are mountains.
The sense of blame through the passes on the highway with mashinami was no, and time was still abound.
Therefore, we decided to pretend to be smart, not uphill, and objasalsa her. Through fields and small villages it was elementary to do.
In addition, we then directly went to Belogorsk. The turn to the village gold the Field was right in front of the city Old Crimea.
I wanted to still look at it.
Marat said it will not go anywhere and lay down on the grass beside the road.
And Rinat went ahead.
However we had 5 minutes to the hill to see the ancient capital and making sure not much to watch in contrast to Bakhchisarai, to turn back.
Marat only closed eyelids in the warm sunshine as we swirl raced past him shouting to rise. Marat jumped up, wildly looking around, I began to see who was screaming. apparently managed to fall asleep.
restoring the orientation in time space he moved for us next.

The road to Abrikosovka is slightly downhill down.
The pleasure is incredible. We're riding a race. Even Marat had forgotten that he was weakened by diarrhea.
Before turning to Abrykosivka hung preduprejdenie what's next to go makes no sense because of the repair of the bridge over the river Wet Indole.
But knowing what little in the Crimea a river and believing that we will be able to move it in a Ford, if anything, we went straight to the Gold field. It turned out that the repairs to the river. We hardly noticed that this bridge when you pass it.
Wet and Indole was like a large stream.

In the village Lgov stopped for a moment to clarify the way and chat with a nice elderly man who has long told us about the neighborhood and the city urged to go to White mountain. However there and so we went.

For the village in two kilometers stopped at the landing to half an hour to wallow and eat.
The road course here is magnificent - smooth asphalt, little machines - just a pleasure to drive.
We reached the village a Break and split - Rinat went to find a spring which we told the counter people, and we Marat went to the store.

Rinat found a spring in the village - the water was very soft and tasty.
Ultimately, after 20 min we came back together.
Just three kilometers beyond the village the road climbs to a small pass.
Feeling that the goal is near, we, without reaching it, turned on a mountain plateau. 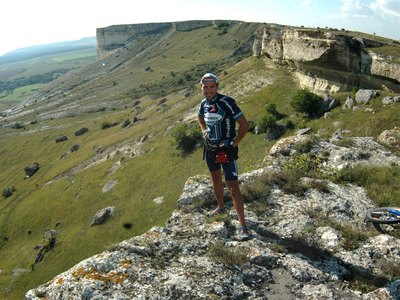 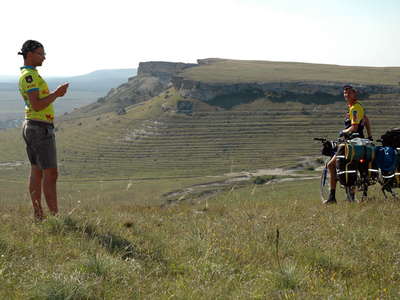 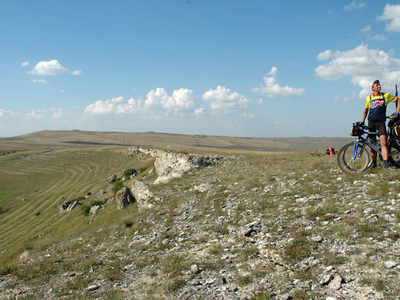 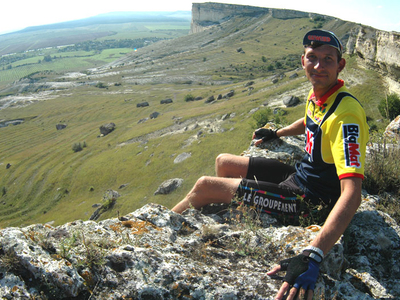 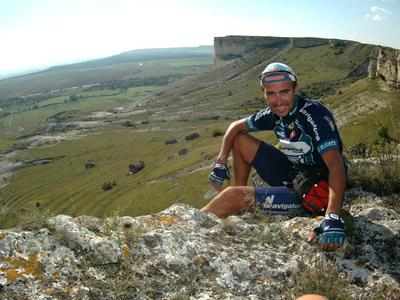 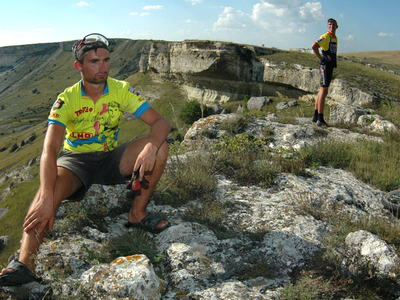 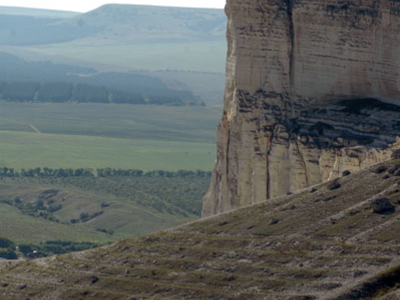 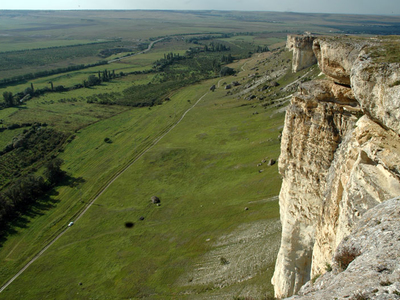 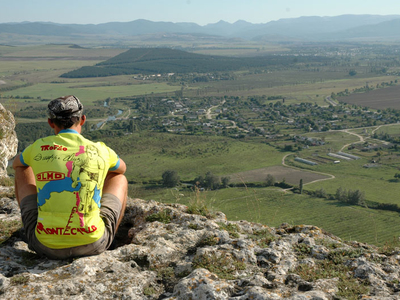 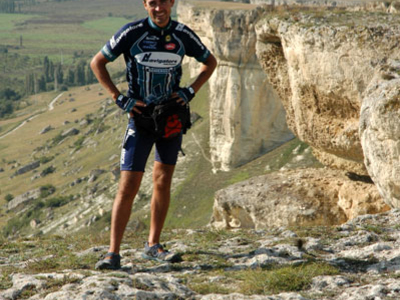 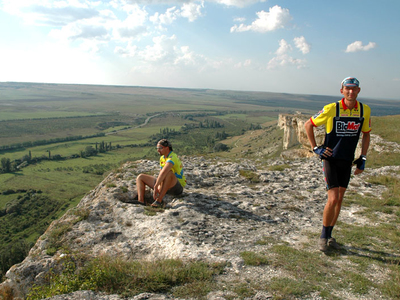 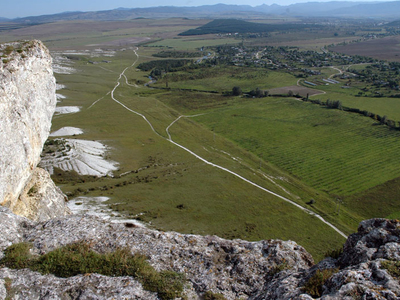 Its territory offers stunning views.
Are not like all other types from the mountains. The feeling that you are flying on for maize, and very low, and below you is clearly visible houses,fences, river./> In the distance, the Belogorsk.

It is the administrative centre of a large agricultural district, situated on both banks of the river Biyuk-Karasu river and its tributaries — small rivers Sary-su and Tanas.
Under the name "the Karasubazar" ("the market on the Black river") is known from the XIII century.
The city fully justifies its name: convenient location on the ancient caravan route linking the East and the West, secured its position as an important trade item.
By the end of the XVI century the number of population of Karasubazar — one of the largest cities of the Peninsula.
His whole business life (and traded here livestock products, bread, wine and "asiram" — slaves) were concentrated in a vast caravanserai, surrounded by a strong wall in case of attack.


In 1620-1622. in the city lived Bohdan Khmelnytsky: the battle of Azorei he was taken by the Turks captured and sold to the local feudal Lord.

In the Crimean khanate Karasubazar was the main city of the individual kinakanta and was under the command of kalga-Sultan.
In 1634-1675. the city four times stormed the Zaporozhye Cossacks.


In 1736, when Munnich burned Bakhchisarai, the Khan moved his residence in Karasubazar, but next year and the city was occupied by the Russian troops of General Douglas and broke.
The last time Russian troops took Karasubazar in 1777. Gradually Karasubazar became burb.
Today's Belogorsk lost its Oriental flavor.
But judging by how active Crimean Tatars Bakhchisaray master, perhaps a few tens of years the color will return again.

A little further towards the sea one can see Belogorskiy and Taganskoe reservoir.
In Belogorskiy reservoir created conditions for recreational fishing, there are boat rentals.

But the main attraction in the vicinities of Belogorsk — AK-Kaya ("White rock"), which is an impregnable rock rises 5 km from the city.

This uniquetion a monument of nature and history, one of the country's largest Paleolithic complexes in a small area — 17 sites and settlements of ancient people!

There we go.
Was riding almost along the edge of the ridge.
Bike on the rocks protruding from the ground was shaking so hard that I thought the whole get, something will fall off.

Came out onto a dirt road that leads directly to the precipice.
On the way we overtook the wedding procession.
White mountain for the locals like the monument to Salavat Yulaev we have there by all means go all newlyweds.

In 1777 the AK-Kaya housed the headquarters of A. V. Suvorov.
And six years later, after the annexation of Crimea to Russia, Prince Potemkin was received here from the Crimean beys and murzas of the oath of allegiance to the Russian state.

From the top of AK-Kaya you can enjoy even more spectacular views of the entire surrounding area: one side (to the East), the chain stretch ancient burial mounds, on the other, in the wide valley of the river Biyuk-Karasu(in Soviet times it was called Karasevka), the city of Belogorsk, and right at the bottom of the village of White rock.

This is the bright mountain, rises above sea level to 325 meters.
In the upper part of the rock weathering formed the scenic similar to the pillars of education, which are located between some inaccessible caves and niches.
In the lower, flatter part of the slope abound in hollows, scree and stone chaos of large boulders of limestone.
At the Northern foot of AK-Kaya discovered almost 20 sites of prehistoric man.
For the first time in Crimea there were found remains of Neanderthal man.

AK-Kaya is the Cretaceous Prairie all Soviet westerns. "The ransom of red chief", "Armed and dangerous", "the headless Horseman", "cabbages and Kings", "Lobo", "Mirage", "Mustang-Pacer", "the Man from Boulevard des Capucines" 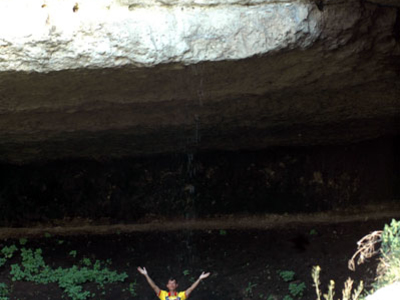 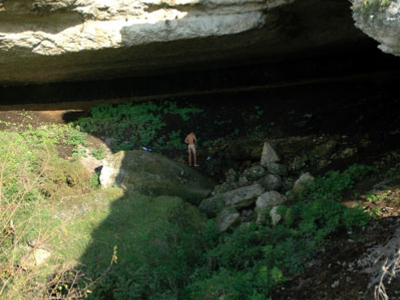 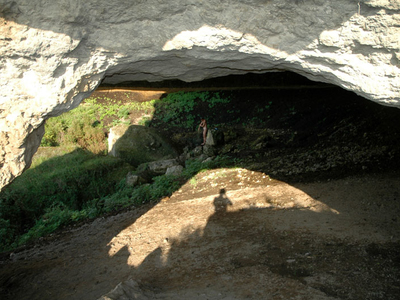 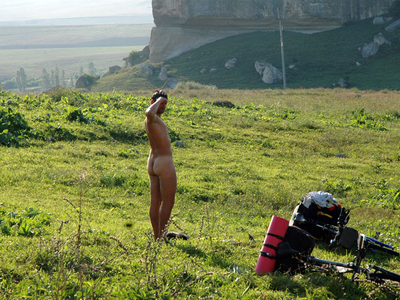 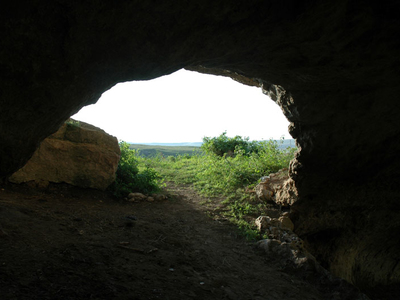 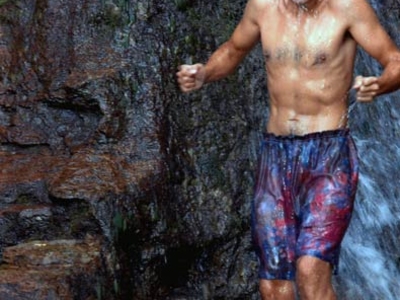 As we stood on the summit discussed the place of camp.
Decided to go down and somewhere to stand around Ruh, Ecka. At the same time and Rinat finally gives up his bait. We Marat took the lead, and Rinat something behind.
Was it the trunk is cracked in one place.
The backpack has scolopacina completely. But I have to give donee the trunk that despite the destruction incompatible with life he still allowed to carry the burden.
With caution we moved on.
And then our plans changed. Marat, with his usual insight, tourist, discovered a grotto formed of an overhanging stone slab . Moreover - from the edge of the plate flowed a stream , falling from a 10 meter height waterfall sparse.
And we after a little hesitation decided to spend the night nearby. The chance to finally wash the sand that was sitting literally in every crevice of our bodies outweighed the desire Rinat fish.

Remaining before sunset time dedicated to personal hygiene.
Turns washed under the cold natural shower. While photographing each other for this simple task. For ethical reasons these pictures are not placed.
Still Rinat is not the Venus de Milo, and Marat was not Danae:) About yourself in General will modestly hold back.

The last dinner was really good half.
Burner Rinat breathed his last breath of Mr Page. Crimean petrol caught up to her finally. Well at least have time to cook hot.
And instead of tea they drank wine - Sevastopol dry Bastardo, purchased by me in Feodosia. Again I do not restrain myself not to sing this delicious beverage praises.

The night I was awakened by Rinat said that the tent looks a wolf.
And in the darkness they looked at each other in tense silence, each deciding for yourself how dangerous for each other:)
When I Raziel eyes of a wolf was not there.
Probably went to bathe under the waterfall.
It's his turn.
◄ Prev
Next ►