Cycling / Journey to Grenlandia / The descent to the lost world

The descent to the lost world 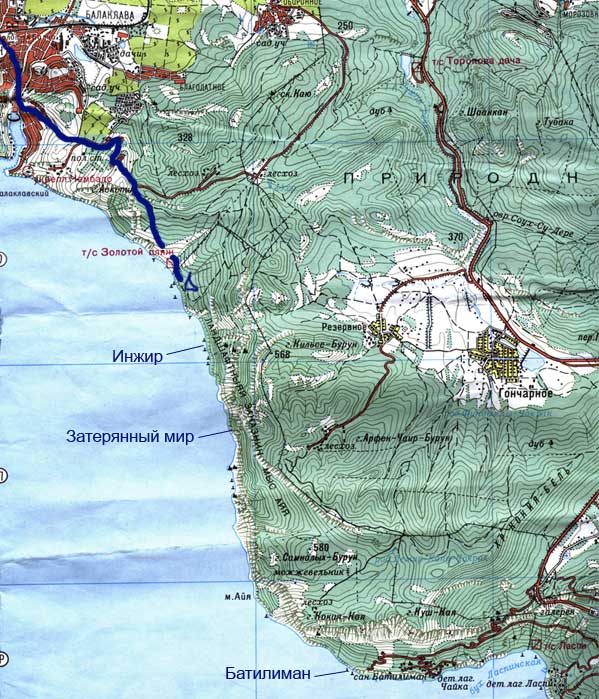 The Chapter features pictures of Renat Bikbulatov my own last year (sorry for the bad quality but they were made of the usual cheap soap box) and some photos from public sites in the Crimea.

In the morning, Marat and Rinat went to Sevastopol to look for argon welding.

And I was left to wait for them. Went to Jasper beach and lay for a moment there.
Every evening the beach employees collect garbage in huge plastic bags and on their shoulders carried him upstairs like a modern day Citify.
The sea plied excursion skiffs from Balaklava.
They carry tourists along the reserve and planted at the request of the beach. Last year I had the opportunity to ride them here.

If from Jasper beach to go in the direction of Balaklava on the sea in the next Bay will be visible the buildings of the military unit of several houses and radars.
This semi-abandoned item for tracking launch torpedoes from submarines.
In Soviet times there was the training ground which worked out a new military technology.
And now you say all of this farm is guarded by just two people.

The place here is very interesting from a geological point of view.

On both sides of the part beneath two completely different kind of slopes.
On the left (when viewed from the sea) mountain yellow - it is composed of sedimentary rocks, and the right reddish from volcanic rock.


Sedimentary rock is formed this way: have precipitated as the result of the flood.
A large part of the waters of the flood amounted to groundwater, escaped with great depth and made with him a lot of debris.
These waters washed away entire former land vegetation (and she was extremely rich) and shared a huge mist fell layers of various breeds.

Volcanic is, simply put, solidified magma and its debris.
They are always dense, non-porous, that is, they do not absorb moisture, are always heavy, that is drowning in water.
This granite, basalt and other similar rocks.

If you go in the direction of the speaker of the Cape Fiolent it is possible to see near the rocks Orestes and Pylades, and the rock with the cross on top
the legendary George a rock with a cross.
The first cross made of stone was installed for the Millennium of the monastery, in 1891, in the years of Soviet power it was removed, and in 1991 the helicopter has established current, metal.


On the way back from the beach I wanted to stop at St. George monastery.
In 1929 the monastery was closed, demolished Church of St. George, made a sanatorium, then concentration camp, then the house and land was distributed to state farms, and one of them was called “the Infidel.”
Since the early 90-ies began the revival of the monastery, in the cells of the newly settled monks, acting as the cave Church, the planned restoration of the temple.
Piece of the monastery of the territory is part of the military.

At the entrance to the monastery hung threatening the inscription that inside can't go even in shorts.
And I was just dressed this way, and Holiness and humility in this case, I did not smell.
In addition there was written that taking pictures inside is also impossible, and those who disobey film will be taken away forcibly.
I stood thoughtfully near the grating of the convent and painfully tried to imagine the monks running around for visitors and vykruchivatsya their hands.
Interestingly - and digital cameras, they take away whole or still know what a flash card.

I suddenly felt sad.
I wanted to leave this blessed, but spoiled people as soon as possible. 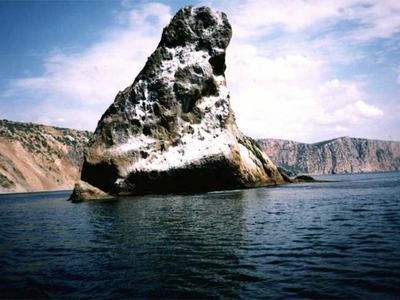 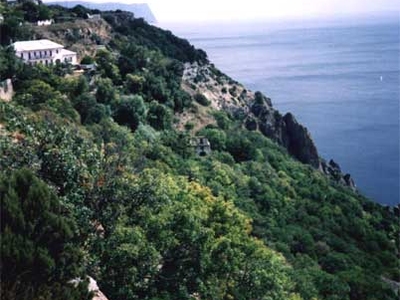 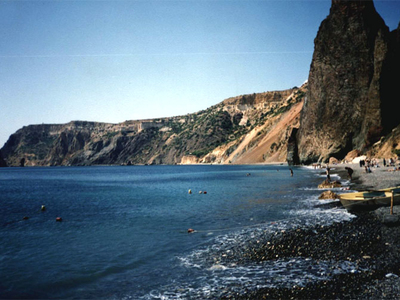 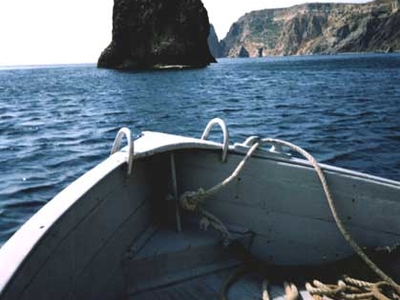 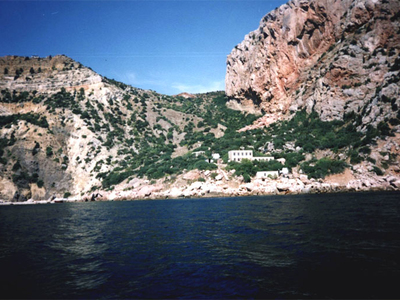 The boys returned for lunch, dusty and tired.
To the city they had again to ride over the hills. Then to rush through the city. And the result - nothing.
It was Saturday and the weld did not work.
They found a great bike shop and a the time spent there, doing what the French call a capacious expression "licking the window".

Residence time has expired, we quickly Packed up and went to the next place of our dislocation - reserve in the vicinity of Cape Aya.

In 1980 on the Western edge of the southern coast of Crimea Laspi valley and the Bay of Balaclava to the beaches of Balaclava was created by the state reserve of national importance "Cape Aya" to preserve the unique natural complex of the Mediterranean type.
To reserve an area of 1340 hectares entered the actual Cape Aya, a large part of the tract Batiliman, the natural boundary ajazma neither and the adjacent Black sea.

The way back from Cape Fiolent to Balaklava we did a quick just over an hour. To go downhill unlike nicer than Vice versa.

To reach the goal can be in two ways - either by boat, which runs every hour between the pier on the waterfront and the so-called Gold beach, or along the path through the mountain masiv Asketi in the direction in the course of the boat.

Of course we decided to take a chance to pass on their own.
Right from the beginning of the promenade up to the fortress Cembalo is serpentine, in places so steep that even Rinat first time for the entire trip had to include a 1:1
The dilapidated towers of the fortress look like a giant ellipsis supplied some sort of giant.
Like saying that the already rich and ancient history of these places waiting for a new page.

There you can enjoy the amazing beauty of the panorama of the city.

At a glance see the whole winding Bay.
The outputs of the underground shelter in the distance, the waterfront, standing with her yachts and skiffs.

I can not help myself not to show the view from different angles.
The spectacle is worth the extra couple of minutes to load the page:)
Immediately say, that these pictures are not ours.

We met people on the road in one voice assured that we did not proedeat.
But we decided to take a chance.
The trail splits to the right goes to the fortress, and to the left along the shore at the top of the mountain.
The Golden beach there are two more urban places. 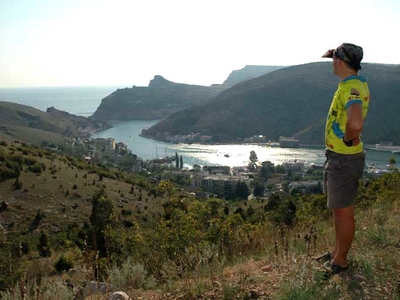 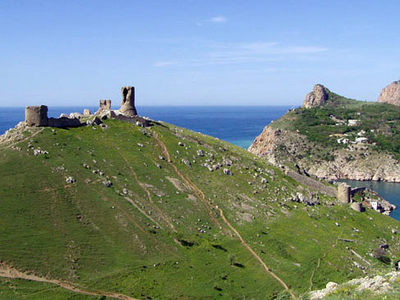 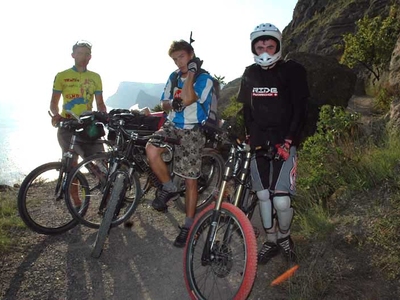 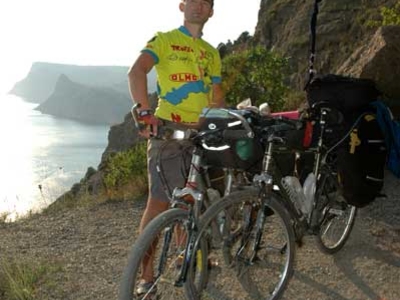 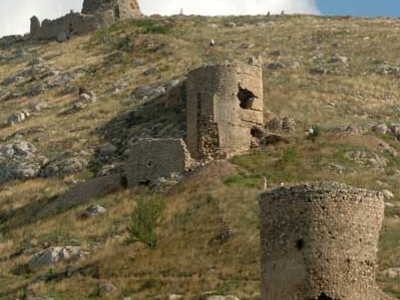 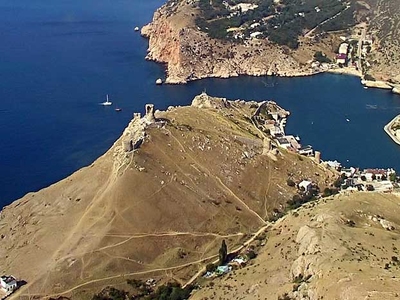 First, the beach is Satan - it can be seen only from the sea, will come down because it is only the steep iron ladder embedded in the rock.
And so cleverly on top if you don't know where it starts you'll never find a place of descent.
He saw how the people upstairs are mnutsya, seeing tourists at the bottom, and how to get to them I do not know.
However the beach itself is very small.

On the beach Silver - it also approaches the boat.(20 minutes away from Balaklava)
This is a great beach - it is sand and pebbles.

To ride a Bicycle on a narrow path a little creepy.
After all, the right of the cliff.
In places the path was not more than half a meter. In the most dangerous places I had to go by foot, walking along the edge of the cliff, and bike protiskivayas between a rock and a.

We found people were surprised to see us and do on foot here and that not everyone will dare.
We were so proud.

Then perhaps you can imagine our long faces ... ... when behind us with a hiss and a pounding came rushing at full speed daunhillnaya the guys on the bikes.
One of them was in full gear, helmet and protection. And the other is apparently hope for the best. The guys were from Moscow and cut circles from Balaklava to the Gold beach, back on the boat and again up the hill.
We naturally them stopped to chat and take pictures.

The descent from the mountains down to the Golden beach was so steep that to avoid falling off, had to implement it separately.
First veloryukzaki bikes then.
Golden beach is the largest beach of Balaclava.
There is mooring for the boat. The tent is where they sell beer, chips and other colonial blestki starving.
Part of the beach of the pno smooth and some large stones, naselenie right uncle brown.
We pretty torment, dragging their belongings and torso through them.

The sun canelos by sunset, the horizon was clear and there were no signs of weather changes.
Look for the best place was once and the result is placed at the beginning of the refuge where the end of Golden beach and start juniper trees descending directly to the sea.
By choosing more or less flat area almost on the edge of a small obryvchiki, put up a tent.

The beauty here of course is extraordinary. Probably the best place for a wild holiday on the coast.

But I'm getting ahead of myself.
Dark.
And then there was sheer terror and doomsday.
We only managed to put up a tent and a little snack as opened up the abyss of heaven.
The storm was extremely strong. I am in my life never seen anything like it.
The rain poured wall.
The lightning and thunder followed each other every half minute.
The wind bent the tent to the ground.
Very soon we felt that lie on the waterbed.
Water flows from the mountains began to fill our tent.
We did not want to be washed away in the sea and we jumped out who could have started to dig ditches around the guide.
And strengthen boulders at the edge of the tent.
Ankle deep in liquid mud, with stones in their hands, we probably resembled primitive people at the dawn of civilization struggling with a violent element of the newly spawned planets. At the time drenched and the water seemed to be everywhere. The air was water and water was all around and within us

I'm sorry, but pictures of all this mayhem there.
Rinat covered by water their equipment than they could.
He waited for what may have to urgently evacuate and saved the most valuable thing for yourself.
He climbed back in we were up half the night.
The constant flashes and the cannonade of heaven called some childish excitement mixed with a shiver.

Only when the storm subsided, we were able to forget the short dream.
Until morning hours.
◄ Prev
Next ►