Igor played the role of the Director and Susanin (therefore, the main frustration of the group was undertaken - the main complaint - not enough sleep, early to rise, quiet going , so how can you strain and what the hell we got here)
The story of the journey will lead away from your face.

Rinat is our bessmennyi photographer (filmed all that is possible, and all who can)
And helped in all the details and was the chief head of our multifuel burner. The fact that we ate every day a hot meal is largely the result of his efforts.

Marat was simply brilliant in the role of chef. And velomehaniki and the doctor (though admittedly repaired and treated it mostly myself because I thank God nothing broke, and Rinat rejected all except women)
Marat joined us with Rinat a month before departure, otherwise our fun trio would be a sad duet. 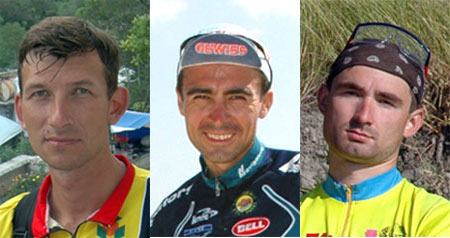 In Crimea, I've been dozens of times and I love this wonderful corner of the earth with all my heart. Every time I come there I feel like I've come home , his second home.
The idea is to ride on the Crimea was ripe for a long time, but it didn't work out.
Or we just haven't been ready then, or did not feel confident it can handle.

But in spring 2004 I realized - it's time. The route plan was obvious - I wanted to show my Crimea my Poputchik. Such a different and fascinating and attractive. The Crimea steppe ,sea and mountain.

I wanted to cross the Peninsula along its perimeter.

We started preparing ahead of time - since March. Since we have almost nothing for the offline campaign.
Many of our purchases made through the Internet in Moscow.
Bought a triple tent , MSR multifuel burner , awning withthe sun.
Peter ordered Tranz X bike carriers and veloryukzaki Pic 99.

Our bikes for a hike: 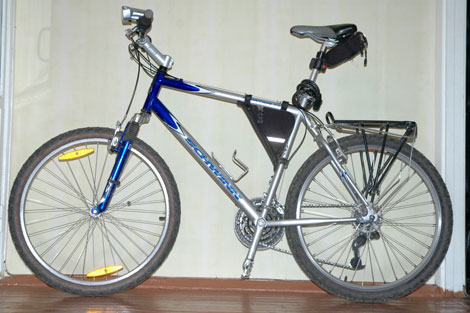 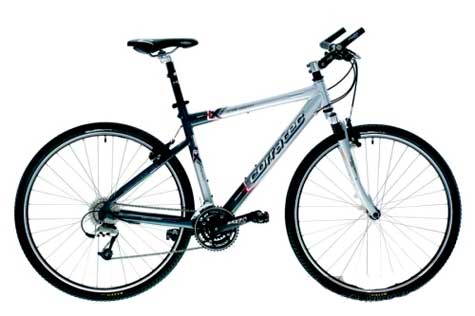 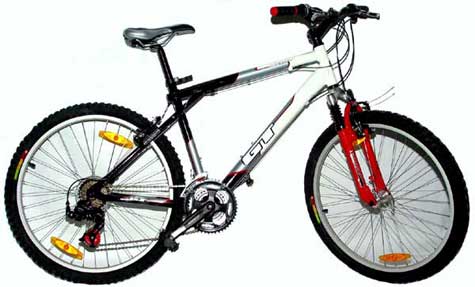 I have changed a lot in his bike Schwinn Frontier GS.
First of all I disassembled the bushing and slide and replaced the grease in them (bought the Teflon Weldtite)
It is necessary however to say that the bike itself was very good. Faithfully served me for 4 years and despite the fact that a charge he was the most unassuming, everything worked great.
Nevertheless, I decided to change him rear derailleur and shifters. And also to collect a new rear wheel for a more durable double rim, believing that when riding on the road with a heavy backpack on the trunk of eight I was just tortured.

And that's what happened as a result.
The wheel I have collected from durable double estoniano Mavic 519 rim, spokes DT Swiss Champion rear hub Shimano LX cassette and SRAM eightfold .
A huge thank you to Ruslan Sultanov for help in its Assembly!
The wheel was fantastic - very light and fast-rolling.
Next, I put a rear derailleur SRAM 7.0 and 7.0, respectively gripshift SRAM
I must say I'm a longtime fan gripshift as the shifters - my feeling is they are much easier to use because it frees your fingers and allows instantaneous shifts for several positions in one direction or another.
A hardware SRAM I've looked for a long time. Despite the total dominance of Shimano I wanted to compare the feelingniya.(Shimano is a Japanese company that from waste from the production of fishing equipment that makes bike components.- it's a joke)

And I can tell you I'm not just happy - I love it!
I got just the PERFECT shifting. and just what that unfamiliar feeling of reliability.
Now I just have forgotten what pulling the wires and incorrect leap chains from star to star.
Simply amazed that such a quality product in our country, in full paddock.

Finally set myself a new chain SRAM PC-38 (this is the lowest model in their lineup for eightfold cassettes) with lock.
The castle is a very handy thing - now to remove the chain for cleaning is a matter of seconds.

As a result, my old Sсhwinn found a second youth - better and faster to roll, easier to handle.
The only thing holding him back at cruising speed - it's rubber - spiked IRC Mynthos XC with a width of 2.1 inches. But I it is unlikely that will change until they wear out , and this something is not visible while I dashed off on it for about 5000 miles:)

On my bikes, Schwinn and GT had previously set a dog's leg - an absolutely essential item - it did not allow the legs of the backpack to fall into the spokes of the rear wheel what would be the road we went. Rinat such a thing was not in the end of the campaign two holes decorated it with ammunition.

Marat Rinat and prepared their bikes themselves. My control in this case is reduced only to the reminders to do and what not to forget this and this.

The horn on the steering wheel stood Marat Rinat. The device is undoubtedly useful , but I have learned to do without them.

The hardest was Rinat, for his unconventional hybrid did not fit well. He had many details of the standard trunk to alter and strengthen (though in this, as it turned out was not enough).

Personal baggage each took in its sole discretion. I insisted only on warm things because in September in the Crimea is very cold.

Of course we took remnabor for all occasions. And spare parts - rear derailleur, camera and two rubber (one hybrid)

Besides the things Rinat ultimatum took a photo backpack with a set of lenses and a tripod, saying that without a tripod it will feel miserable along the way. Had to go meet him.

Almost everything that we took with you was useful and was used, except that the rods Rinat(but that was useful, though not in the main role).

Finally I got Rinat Pikovsky covers to transport bikes on the train and Marat made himself.

Will finish this digression.

Hereafter, I will lead the story of a person and to follow his own impressions and conclusions.
But since such a statement obviously will sin some one-sidedness