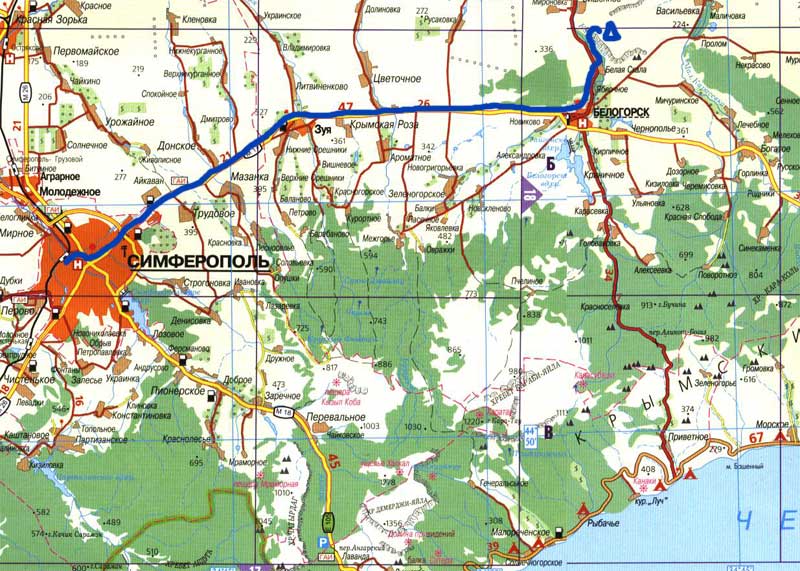 The morning was foggy and cold. I climbed out of the tent and as if plunged into the ice bath.
All the grass was wet from heavy dew fell.
Our last night in the Crimea ended.

This morning we waited a long time until the sun will appear from behind the mountains a little bit to dry the tent.
Went to wash to the waterfall. Dry Breakfast, washed down cookies with cold water.
Marat was completely cured and nothing more he was not sick.
And the meeting went down. The road down from the spurs of AK-Kaya and walked at its foot.
To the right flowed a river Karasevka(Biyuk-Karasu) and was located in the village of White rock. 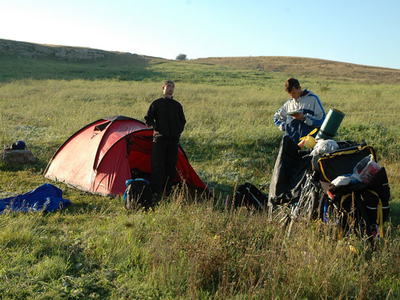 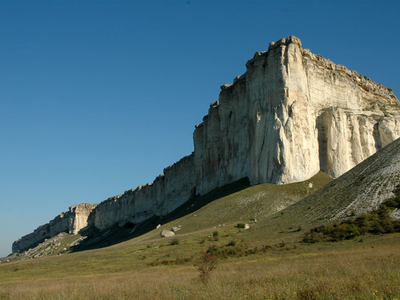 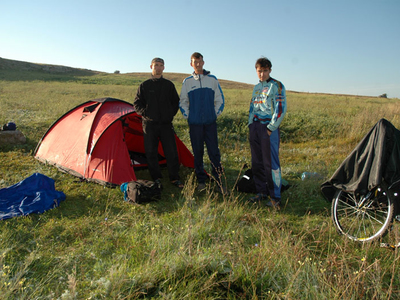 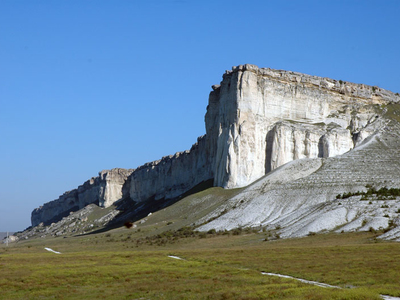 Made some beautiful pictures of the mountain AK-Kaya from.
The spectacle is truly impressive.
The white limestone colossus, a huge native tooth grew out of the ground.
Crossed a rather turbulent stream on the bridge (Rinat sighed about fishing) and already the asphalt road turned to Simferopol.
About 10 o'clock in the morning passed without stopping Belogorsk.

Our train to Ufa was 16 00.
The time was even in bulk.
The distance to the capital of the Crimea was about 50 km. Route to Simferopol particularly nothing remarkable.
Standard long ascents and descents.

When driving up to the Zuya, there was a loud crunch and Rinat screamed.
We immediately stopped.
That turned off the rear crossbeam of the trunk. Through it was throwing a rubber expander, securing the backpack.
It worked like a sling and a piece of aluminum shot to hurt our friend in the back.
What's amazing is that the trunk is not completely razvalitsya and allowed Rnto drive the end. Just back of him stands the shelter has closed to each other and the backpack has become harder to RUB against the wheel.

When you arrived at Simferopol, there was a long hill.
On the descent Marat took the lead and flow of the wind he blew a t-shirt with trunk (and he often went shirtless whether to sunbathe, or to attract girls).
I would have lost it. But luckily for him I went back and picked it up.
However, I had to go uphill about 100 meters - I speed not have time to stop. 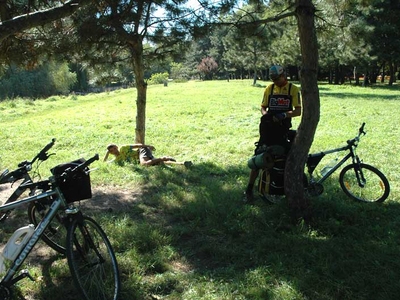 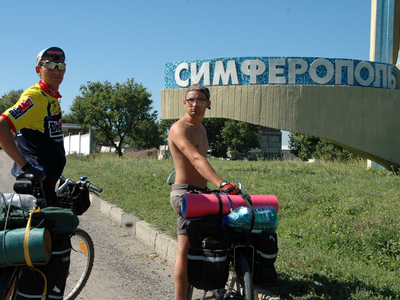 Well, that and Simferopol.
We drove through downtown and turned into the station.
Near the station found a cheap cafe and then drove to the nearby Park.
Before the train was still 3 hours.
The guys immediately fell to the grass . And I went to the market near the train station to buy the last of the grapes. Something this time I never ate them.
When he returned, the three of us enjoyed it and the last rays of the sun.

About three o'clock went to the train.
We decided not to disassemble the bikes at the station,and pass them immediately to the car.
So much easier. a composition for 25 min. before departure.
We immediately found our car and began to pack.
Exactly 19 minutes took the whole process.
When landing AGAIN come in handy permit the carriage of bikes as hand Luggage.

As they say, without papers you're the bug, and a paper person.
Dragged our Luggage inside, placed the covers with the bike on the third shelf.
The train gave a whistle.
And we went home.
Mixed feeling came over me and regret from the fact that it was over and the joy of the perfect.

Sea Shine and silence, and awe!
And environment of darkness and silence
Along the coast the crying and babbling
Night lapping waves!