Cycling / Journey to Grenlandia / The steppe behind you

The steppe behind you 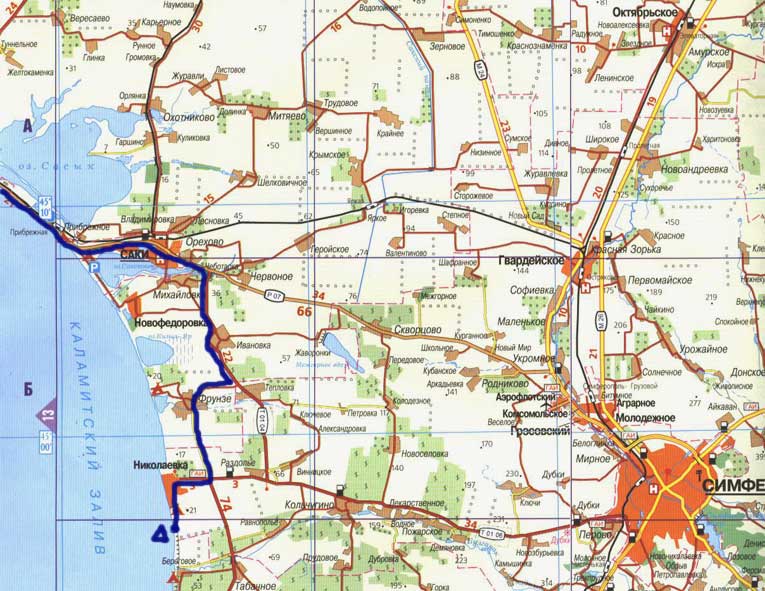 In the morning we had a long sleep, enjoying beds and cstime sheets.
However "we" refers mostly to the Rinat and Marat , which forbid not feed bread, only to ground to suppress.
That this morning their friendly precarity snoring dissonance resonated with solar Evpatoria quiet cozy courtyard. And for some reason I could not sleep. All the time I woke up at six o'clock.
Besides, I caught myself feeling that I am uncomfortable in the house that you want it again at will - in the tent:)

Paid day expired in the afternoon.
So we had to go to the beach nearby.
This suburb of Yevpatoriya and quite unsightly. Some barrack-type houses. The beaches are littered with concrete blocks. And everywhere is the people wherever you look.
Marat first could not stand the torture to the public beach and went home to cook us all a soup for lunch.
On the way we stopped itself replaced the zipper on the shorts( because the pins ,as a temporary measure, with the role of the castle failed badly)

After dinner, we said goodbye to the hostess and sent rocinante in the direction of the SAC.
The road goes along a long, narrow spit formed on one side by the sea and on the other mud lake Sasyk.
A lot of tents. But the place is uncomfortable. Machine at high speed driving and the railroad in addition immediately.
Halfway between Yevpatoria and Saki saw the sea large building site - third of the Crimean water Park (the other two are about, and Simeiz Sudak) 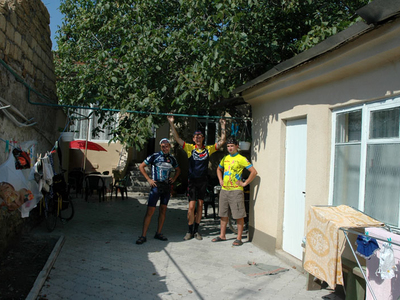 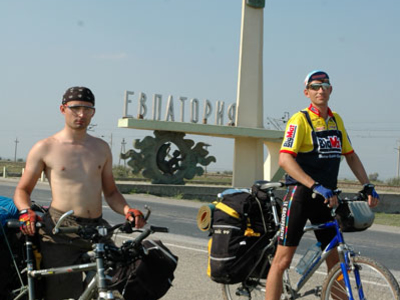 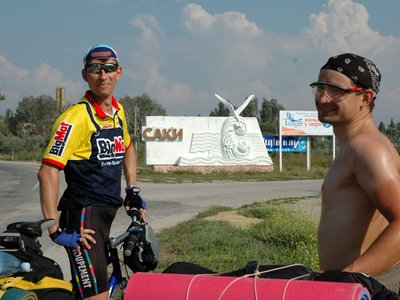 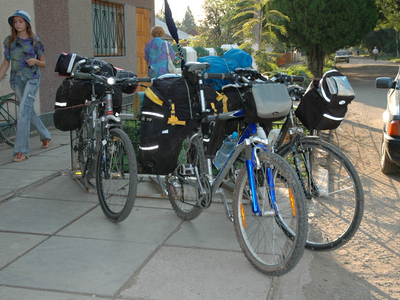 Saki, we drove quickly to look in the city not much.
Only stopped to put gas in the tank to the burner to the nearest gas station.
Immediately after the Saki nature began to change. Appeared the woods and tall, thick trees. Steppe Crimea is over.
The track turned right in the village of Ivanovka. The road is simply gorgeous. Almost no cars.
The terrain is a bit hilly. I used to use the effect of the flywheel to facilitate the capture of upgrades.
Loaded bike has good response and if the next descent as it should be dispersed, half of the rise can be overcome almost without effort.

After the village turned in the direction of Frunze.
The road became even better if we did not go to the Crimea, and in some sort of Switzerland.
An urban-type settlement in Frunze is located five to seven kilometers from the sea.
Extremely clean and comfortable it we were pleasantly surprised.
No wonder that in 2003 it ranked one of the top places in the Crimea, in the competition for the most equipped town of the Peninsula. We stopped in a local shop and bought food.

Beyond the village we turned off on a frontage road running parallel to the sea.
In some places it was quite dirty after yesterday's rain. Once out on the asphalt, we spent about an hour wandering until I went to mykolaivka.
Mykolaivka quite dirty and gray town.
Houses mostly wooden. A lot of people.
I am amazed how people are not disgusted to relax in such places.

Once you reach the local market we went to the sea, looked at the local beach and a lot of people.
We were already thinking about bed. And we moved around the village further South.
half an hour of driving along the endless camp sites.
Dirt road ,initially good , have become broken and dirty. She walked a kilometer from the sea.
The sun was down and we were forced to turn to the sea through the field. 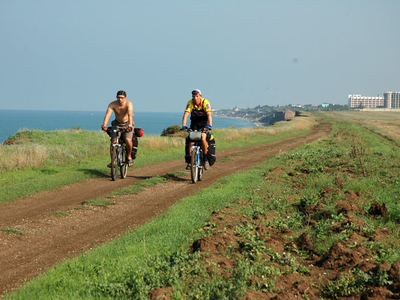 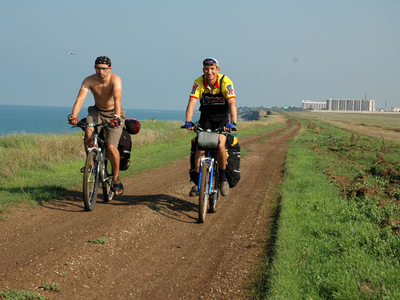 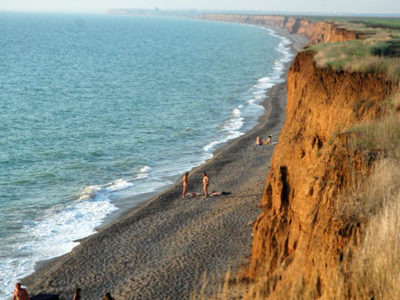 The grass was hard, the bike had to drag almost dragged.
Guys habitually scolded me and called Susanin.
Finally we reached the shore.
The spectacle brought to our SBBru is impressive.
Familiar to clay steep slopes. But the slopes of these were very serious height. They stretched to both sides where enough look.
The contrast between the blue sea and the fiery red Bank lit by the setting sun
The beach - pebbles.
Found a trail down and waiting for it to get dark and the few bathers go, right on the beach put up a tent.
Was a bit wary of the proximity of housing , but the night passed quietly.
◄ Prev
Next ►