Cycling / Journey to Grenlandia / In the train

And finally the day came for our departure.
We woke up with Marat (he decided to spend the night with me to get it was to go to the station) at 6am. Had Breakfast, got on the phone with Rinat and agreed to meet at the station square, wearing backpacks and went.
After 20 minutes we were on the spot. Waiting for Rinat began to disassemble the bikes and put in pouches along the way answering any questions interested people.

Marat came to see his friends. They helped us for a time to bring our belongings to the train when it filed the second platform.

Here we made use of prudently taken with him a license - a permit from MPs for the transportation of bikes as hand Luggage.
Those who need it can download a license here.
She withdrew all of the claims that had started to voice guides us to our car. 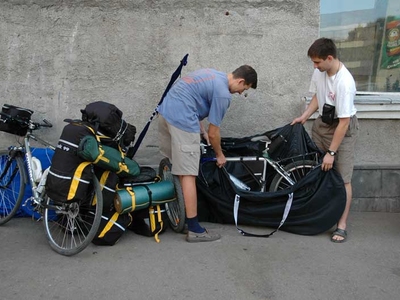 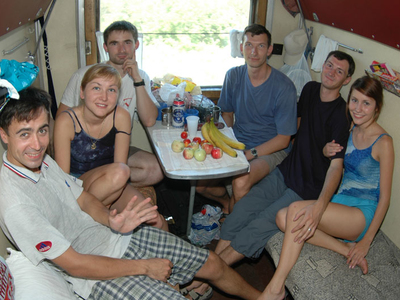 On the train we rode fun. First we got fun traveler -girl Elvira who was traveling to his parents in Kiev.
The second in the next compartment rode my longtime friend Glory with his girlfriend Irina.
So we rode together. Drank ate and sang songs (especially folk Ukrainian).
Marat ,who finished in unforgettable times the school of music portrayed , backing vocals. With ill-concealed pleasure that he was pulling the bass, singing Elvira

The quality of his singing ,of course, to put it mildly, left much to be desired, but who will throw a stone at the man with mospathway:)

We passed the border calmly. Filled migration card and replied to the customs officers how much is being taken and why.

After that, Marat said that since we are already in the Ukraine - he just can't drink vodka with bacon and ran to the store , fortunately the train was still standing at the station. By the wayand fat was a fixed idea of Marat. He was looking for it all over the Crimea everywhere we drove.
Looking ahead ,I will say that with the fat in the Crimea a big problem. Simply put, we have not found it.
Apparently it from all over the Crimea has brought to the festival of bacon held in Simferopol under the slogan "the Fat was, is and will be!" . (Oh well:)))) Wrote that at this festival, made a giant sandwich with bacon with a total area of 9 square meters.
For making the sandwich took 40 pounds of fat, 100 - black bread and more than 2 hours time.
But ate it for a few minutes.
And it hasn't happened sooner, the sandwich was guarded by the police, reinforced by soldiers of internal troops.

In General vodka Marat found ,and the fat was not ,but no worries - it successfully replaced the sausage.
After that, the songs have taken on even greater poignancy and intensity. Anecdotes poured as from a cornucopia. The guys involved in the competition for the right to occupy a niche in the heart of Elvira, not in the least embarrassed by the fact that on the platform in Ufa it walked a young man.
Elvira skillfully as any woman, maneuvered ,without favoring anyone. No, probably Marat she still sympathized with more. Or I thought it was:)

Rinat along with our meal ran to take pictures of the girls from the other compartment. I must say that he is everywhere taking pictures. But that's a topic for another story.

In Kiev said goodbye to Elvira. Before Crimea there are very few

My head is spinning lines

...Priyshov at Sadochok, Zozulya Kavala,
And Ty Zh mene, Galya, the second is not souvala... 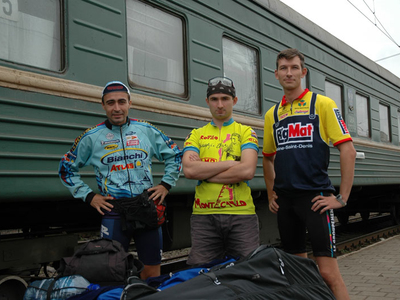 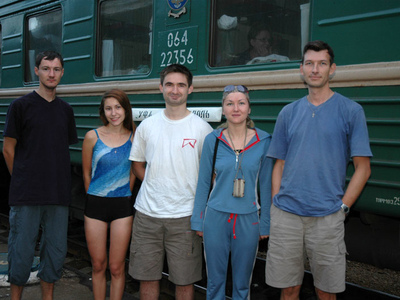 To Dzhankoy time passed very quickly.
Train there is 9 minutes, so when we unload as they say slowly but was exerting.
On the platform took pictures and wished a happy journey Fame and his friend, they went on to Simferopol.

The Crimea has opened their arms to us.

We waited a long , but exciting roadha full of impressions and interesting meetings.
◄ Prev
Next ►