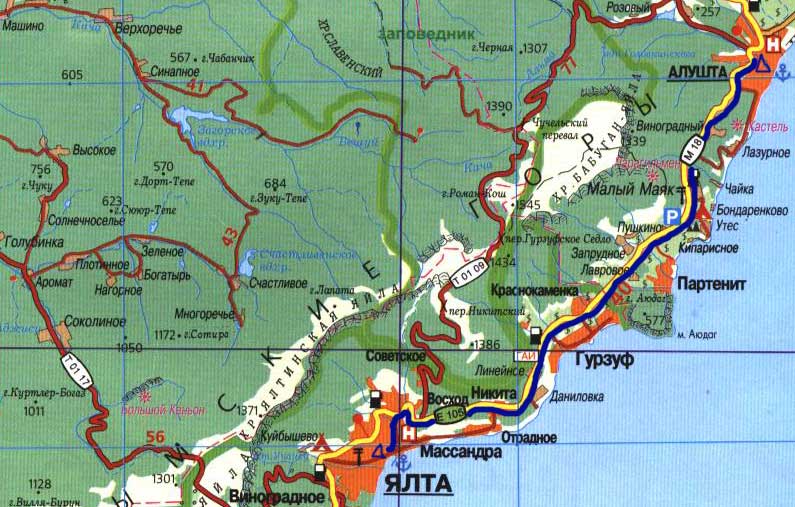 The next morning, summer is over. The Lord turned the switch.
Had dropped to 18 degrees and it started raining. I barely had time to shoot in the yard with ropes our Laundry. A trip on the cable car was covered.

To 11 00 lay in bed and watched TV.
Then the rain prevratilsja and villanua the sun.
Vospolzovalis this and started to get on the road.
Said goodbye to the hosts and 13 00 went to Alushta. We went on the Yalta highway, which is not attractive.
The road goes up and down.
We dressed warmly - put on a windbreaker. As the distance from Yalta was becoming colder and colder. Fingers pained from the grip on the steering wheel.

Rinat for the whole day never got the camera.
This day would have been completely unremarkable if not an amusing circumstance.
When to Alushta was still 15 miles and I made another mark in the route book at a gas station - I suddenly was hit in the head!
The fact that we forgot in the fridge 2 bottles of wine purchased the day before and stick the Moscow smoked sausage.
From Rinat's face and was going to immediately go back.
Hardly dissuade him. It was cold waiting for him for two hours was fraught with cold.
As a result, after ten minutes of hesitation and feelings still moved on.

Before Alushta highway goes down. The descent is long with a length of seven kilometers.
It was really cold - the temperature dropped to 14C. The rain has again gone.
And we realized that you have to rent a house in Alushta.
Acting proven way went to the bus station and quickly found the apartment.
Just for$ 4. Only this time, she was on the seventh floor ninthtataki.
For a long time we were loaded into the Elevator, which was paid.
Start it from the key in the form of magnetic tablets being applied to the window pane. Each flight cost about rubles for our money.
But of course it was at the expense of landlords.

Our overnight stay was the most komputernoe for the entire trip.
Large Studio apartment.
With an extensive kitchen and balcony, which put great.
A good color TV.

When paid the money and settled - Rinat came to us with a heartfelt speech.
He told us that it continually oppresses and does not allow to breathe freely.
That heavy stone fell on his thin, vulnerable soul, and produces increasingly neurotic depression.
He noted severe financial and food situation on the Peninsula and the infinite pretensions of the local aboriginal people in his wallet.

In short five minutes later he was no longer with us, and went back to Yalta by bus.
The goal, as you probably guessed, there was a return to the historical homeland of two bottles of wine and a stick of sausage.

Rinat was absent for more than four hours.
During this time we Marat had to go to the market, buy a lot of food to eat.
Were only waiting for our messenger to start the dinner.

We have already started to build all sorts of guesses when Rinat returned about 21 00.
Wine and sausage - was he!:)
When he burst into the house of our cute Yalta owners - they were sitting at the dining table.
Wine and sausages lying in front of them , on their necks was tied a white napkin and drool running down the waterfall on the chin.
Perhaps you can imagine how stretched out their faces when Rinat pulled literally from the throat all the wealth.

Over dinner I poured more Rinat worked so hard getting to the wine.
Still such dedication is worthy of respect.
He can say he put his energy and fortitude to the total altar to achieve our great goal.