Cycling / The Megan Binom: we and the sea / The Internet as a means of fallacies

The Internet as a means of fallacies

Story of the day told me on equal footing with Andrew from Peter.

[Igor]
After a sleepless night to get up in the morning was difficult.
I mobilized people in this sense but the young body of Elijah clearly didn't want to Wake up.
Ukrainian guys were already busy in the camp.

While I was swimming and then cooked porridge my companion deigned to unstick my eyelids.
What's the deal - I thought - why do my companions always get such Sony.

Had Breakfast and started to say goodbye.
We gathered at the boat on the way back to Balaclava, and our new friends decided to cross the mountains and otpravilsya in the direction of Yalta.

Again dreary dragging Luggage and bike through the coastal boulders.
And here we are on Board. Twenty minutes again and Balaklava.

Today in Sevastopol come friends Ilya - Alex and Andrew - he's with them, too, on the Internet agreed, and with me.
And with them and he whom they also met through the Internet and called.

Oh, this Internet is great helper and decoy.
The people there appear in a completely different light than there really is.
Me with Ilya still relatively lucky - although my blood he drank too considerably.
But what was yet to come - was a perfect illustration of the dangers of indiscriminate Internet Dating.

Two hours later we arrived at the railway station of Sevastopol.
[/Igor] 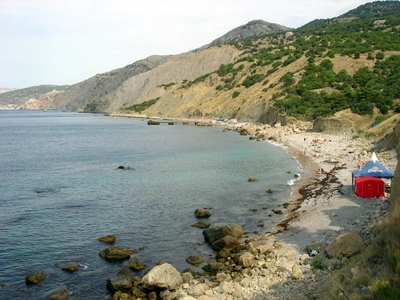 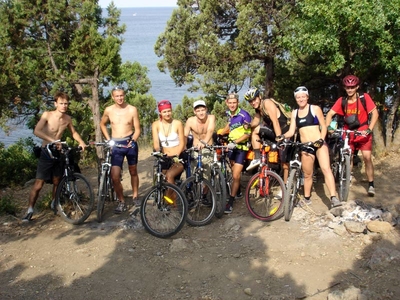 [Andrew]
To begin with, why would start – we were looking for a companion.
I mean me and my brother, or my brother and I, as you like.
And companion we needed – because travel to the Crimea alone – it's a little self-confident.
I initially thought so.
In General at that time just the two of us. <br />
Therefore was thrown cry to the Internet, saying, let us good people!
The Elijah by that time was already in the Crimea, and time was short...so there was Serezha.

We first saw Sergei at the station of Sevastopol.
I must say then that I realized a lot of things, but apparently my brain had already poisoned the pure air, and warmed the hot southern sun.
Serge was with the shoulder backpack type ERMAK.
And he Sergei next to this miracle of domestic equipment seemed even smaller than he was, and he was small .
Okay, nicho ...apparently people seriously come to the point... This is because we each other calm. And everyone at the same time thought to myself, "well, Well!"
By the way, we almost immediately lost all illusions about the equipment of our ward.
We went to buy return ticket.
Sergei reached into the backpack. For his wallet. To the bottom. From the backpack were extracted: a sleeping bag of the type POLAR, 2 foam (why 2?), pants like jeans... and wallet.
More in the backpack was nothing.
If someone still doubt that Serge will be all right after he asked how to change gears on his new AUTHOR SOLUTION, the last doubts disappeared. I cursed the Internet.

We waited at the station, Eliyhu and he introduced us to Igor from UFA.
Igor we just seemed hard nut to crack, a sort of led-guru, able to effortlessly win the tour de France and even not to notice.
If you watched "the triplets of Belleville" and remember a crazy driver, you will understand me! :)
Ilya and I had met in St. Petersburg, and the brother immediately recognize him as a whiner.
He thought, Typical of the St. Petersburg cyclist!

It turned out that the boys are heading along the West coast, across the distance to Cape Tarhankut.
This was us a few ways, or rather in the opposite direction, but, considering the balance of forces (Sergei and Igor) decided at least a little to go along with the "tandem AI" (Igor+Elijah).

Have you ever been to sevasfield?
Know where and how is the station?
For those unfortunates who have not been in this beautiful city by the sea, make no mistake: the station is located in the lower reaches of the South Bay and to get to the center and crossing to the North side (where began our trip), it is necessary to overcome.
Not too complicated and not particularly steep, but still uphill. So woooooot. We rise with grief (by AUTHOR e SOLUTION e) in half overcame, but the descent cost us a puncture of a chamber of a hybrid of Elijah and (ATTENTION) !twice! with the fall of Sergey!
[/Andrew]

[Igor]
To tell the truth I was dumbfounded by this Sergei.
And mentally scolded Elijah who took me to Sevastopol to meet new travel companions.
I'm hard to get used to people and I don't really like halfway to change our tandem.
And this Serge lowered my mood through the floor.
I already imagined the agony that I will endure in such company.
As a considerate person I thought ultmative to Express their disagreement.
Don't like to offend people unnecessarily.
Had to yield to fate and see what happens.
And then it was that I went back to Sergey, seeing that he is poorly run with the bike and behind the avant-garde. The patrimonial sense obliged me to keep our new team together.
During the descent from the mountain, our mountain-biker something done with my two-wheeled machine and collapsed at full speed on the pavement.
I drove a bit further and was horrified!
Can't imagine what the blue is possible.
Luckily Sergei had minor scratches.
It turns out he forgot where the brake is on the wheel and mixed it with the shifters.
Sergei was the Moscow programmer. Majored in accounting.
Was such a typical self-absorbed Bumpkin nerd accidentally got out of the world of home computers.
Acute senses of pity pierced me to him.
The guy has absolutely no ready for the Cycling trip.
He's just on the Internet imbued with the idea of Crimea and adventures and probably thought why not. And no one told him that no business is impossible without preparation and training.
And now the harsh truth of life drove him over the dusty roads of the city-hero.
[/Igor] 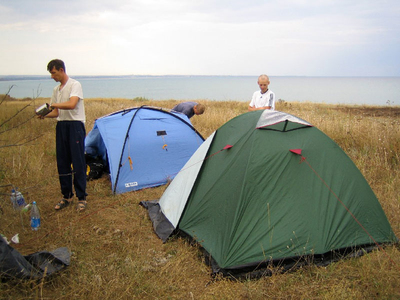 [Andrew]
At the time of the forced pit stop, licking wounds and camera replacement I swung buy a local SIM card.
When I came back the guys were already sealed second chamber (again, Ilya).
A sharp splinter stuck in the tire, safely did the trick (science – puncture check the inner surface of the tyre for foreign objects). My brother decided to bite.
And Igor enjoyed the contact with the local seller icons.
My grandfather was not someone to talk to, and he somehow saw in our friend a soul mate.
He sang something, go into historical digressions, gave wise advice (Igor mostly smiled politely).
Goodbye grandfather cried:
- Take care guys, Igorek!
Igor has promised to take care of us, but the icons have not bought! ;)
Everything else was about the clouds.
After arrival at market (SEAGULL on the area of the Rebels, a local is why it is called the area of the Rebellion) to buy a replacement camera, we still got to the ferry on the North.
That day my brother and I crossed the Bay 3 times.
Ferries from Central go North every 20 minutes.
In Sevastopol ferry – city transport and is cheaper than the bus in St. Petersburg.
However, we had to pay for bicycles.

On the ferry I decided to eat. Brother participated.
It started to rain.
For the beginning of August in the Crimea – a rather rare phenomenon.
From the vaults were retrieved the jacket and found that Sergey, it is not.
On arrival on the North side – the rain turned to a downpour.> To go would be suicide – so we got under the deep oak, holding over their heads a piece of plastic film, used as packing bikes for transportation on the train, began to wait.
Meanwhile the rain became a storm and was lost somewhere!!!

Igor was the first to speak:
- Where you guys get it?
For some reason we immediately understood he was talking about...
In the next 10 minutes, in the process of hot, but undeniable conversations, it was decided.
Sergei to take it would be dangerous for him and burdensome for everyone else.
Satisfied with this outcome, we decided to drink yogurt with bread.
Brother participated.
Thunderstorms in the Crimea, as sudden and fleeting.
We did not have time to coagulate, got Sergey in a raincoat.

In General, in the end, after a hard conversation, all agreed that Sergey we leave in Sevastopol.
Serge in my opinion was even pleased with this state of Affairs.
We quickly found him a cozy corner at the old ladies, the benefit in Sevastopol problems with removal of the housing there.
And wished further success and good rest goodbye!

Finally we were on our way!
Slipped giving Mokrousov, flew Lyubimovka.
In the village Fruit we pulled away from Ilya and Igor.
It turned out that on a wet road Laden hybrid behaves erratically, Ilya made a SALTO MORTALE through the steering wheel. It seemed that nothing serious, bruised hands, and a scratch, so we moved on.
[/Andrew]

[Igor]
Drop Ilya I have not seen. Looked see not, behind the man.
Stopped and waiting - you never know itch.
After 5 minutes I felt something was wrong and went back to meet him.
Elijah was a little battered but with the mind kept great. Drop the second person in one day is too much.
From his companion, I did not expect.
Ilya said that everything is normal and could go further
ong>[/Igor]

[Andrew]
To go to the Crimea for the beloved bikes, breathe in the scents of orchards, admire the scenery! THIS IS THE LIFE!
Even though the weather left much to be desired.
The clouds did not think to leave and time was running out. The twilight descended. We started looking for a place to sleep.
Turned in the direction of cachi and went to the shore realized that to move forward it makes no sense.
It was dark and the rain periodically fell.

The place was generally quite good.
Sand field 30 metres above the sea with two bushes and a bunch of barbed wire adjacent to a holiday village and a busy highway. What could be better? :)
[/Andrew]

[Igor]
District Kachi is another area of military Crimea.
Probably when there was located the border guards and the barbed wire hidden in the withered grass - the remains of coastal fortifications. Polyprolene houses the Outpost was visible a little distance.
A high steep Bank of slippery clay made this place quite impregnable from the sea.
Red clay is very tricky - as recently as this spring, somewhere near, a landslide occurred on shore and slid down to the narrow beach with the tourists.
Like someone had died - clay is not breathable and the people buried under it, instantly choking.
So we set up the tents maximum on from the break - away from sin
[/Igor]

[Andrew]
Okay. Say. The nearby highway didn't bother us this time.
Because after our rather hearty and delicious and most importantly HOT dinner (brother naturally took the most direct part) with pepper vodka, fell to sleep, started !SUCH A STORM!, with every glare of lightning in the tent became bright as day, and the peals of thunder drowned even the snoring of my peacefully sleeping (and most importantly, well-fed) brother.
Crimea was glad of our arrival and was much rejoiced on this occasion.<br /> [/Andrew]