Cycling / The Megan Binom: we and the sea / Subversive fruit Tarkhankut

What could be more gorgeous than the night camping on the banks of the quietly splashing sea.
On a deserted sandy beach.
The Tarkhankut Peninsula is a strange place.
It is attractive and its nice, but take it in small doses. Probably due to the absence of greenery and it's like something subconsciously unnerving.

So in the morning we were not to linger and as soon as people began to come to the beach, went to the way.
The track goes along the very edge of the sea at the small clay cliff.
To Okunevka just a pleasure to drive.
Marino stocked up on water and food and settled briefly in a small café - Ilya wanted to drink beer.
He often wanted to.
Just a beer pump on wheels!

So well have to have - sat desales and rushed with new forces in Okunevka.
Here the terrain is already changing.
Clay soil gives way to limestone rocky slates.
On a dirt road and then stick out from the land of white rocky hills.
The bike throws up over them, it creaks and groans all its mechanisms.
Plus the all-pervasive fine dust covering with time, and legs and veloryukzaki thin whitish layer.
Yes, an indispensable attribute of our space - debris and broken glass.
Like some kind of pest methodically doing so he stabbed the bottle and scatter the pieces around. 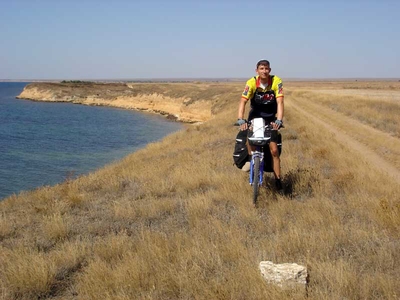 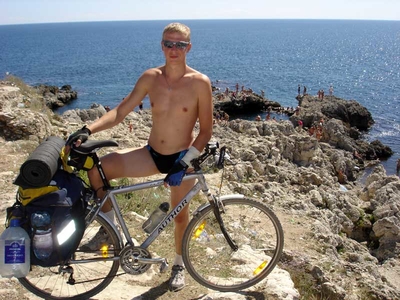 Tarkhankut near Olenevka generally resembles a garbage dump.
When we drive to the famous Chalice of Love the waste pile, like the pyramids in Egypt, the rise of the stinking cones wherever you look.
Every time I see this and every time am amazed.
After all, people come in CARS!
What you should take with them the remains of a picnic?
I WILL NEVER UNDERSTAND IS DISGUSTING.
And this is true for all citizens of post-Soviet space.
At least from the Russian Ukrainians do not differ in this respect.

But local authorities also care probably.
Attempts like that to get out and take out all that is not seen. 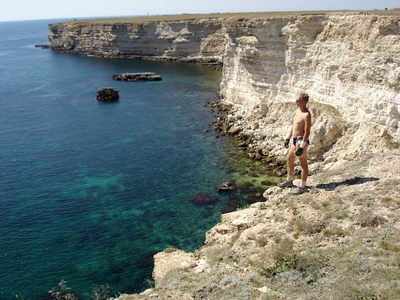 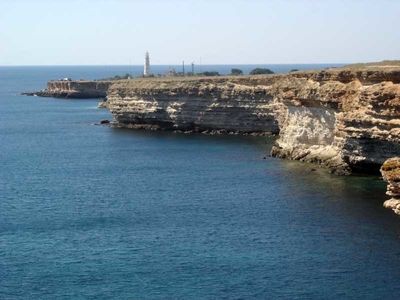 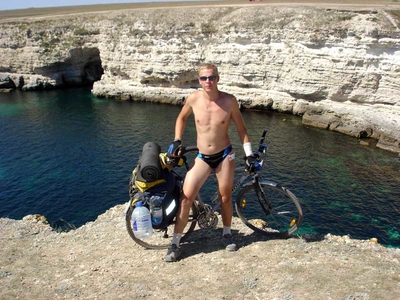 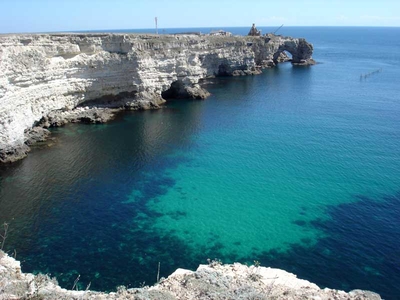 In total we drove up to the Cup, looked out of people walking down the rocks to the crystal clear sea, dodging broken bottles and other remains of human activity, and went on.

Places of course there are fabulous.
The plateau of the Peninsula gradually increases and reaches 30-40 meters in some places.
The plateau breaks off to the sea, picturesque steep slopes.
Standing on the edge, you feel a wave of enthusiasm to the elements and clearly understand as a small man.


In Olenevka on local rinachka bought a melon and then with appetite ate it.
From Olenevka a bus to Yevpatoria and Ilya offered to him to leave because Tarhancut he is tired.
But I could not betray the interests of the bike and so smalodushnichal.
A real Bicycle rider is unable to move otherwise than on its wheels I thought.
Actually I would like to go there and breathe the sultry air of the steppes.
Illya long to persuade, and soon rode our bikes to the black sea.
Very beautiful view of this city from the hilltop where the road comes down at the entrance.

Actually that day we drove quite a lot.
I was watching the bike computer but the feelings to the end of the day, about 80 km we wound.

On the way to mizhvodne driving through the vineyards, I saw a lady selling by the roadside.
She didn't go to this place for a year.
Is it possible to be in the Crimea and is not the most strategic it product.
The grapes are very different in taste from tasteless and watery that we sell the house.
Here it is filled with aromas of the earth and filled with the rays of the sun.
And also incredibly Polesen - no wonder one of the treatments on the Peninsula - ampelotherapy - treatment of grapes.
Of course we bought three kilos of different varieties of Granny.
The benefit here is it's very cheap, as sold by the farm producer. 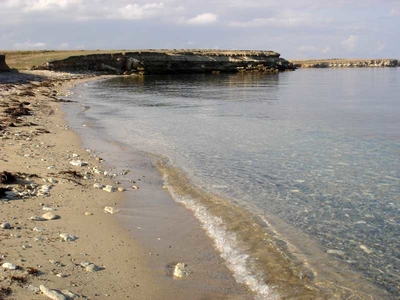 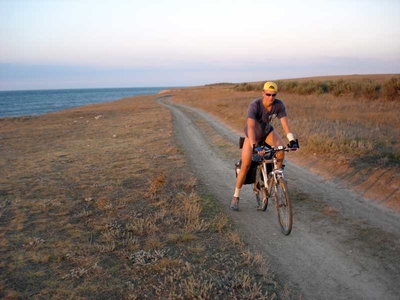 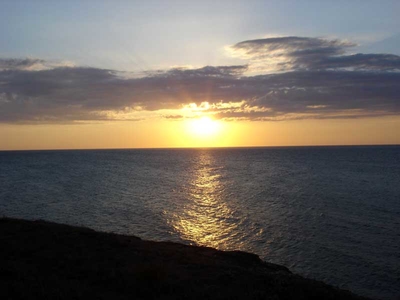 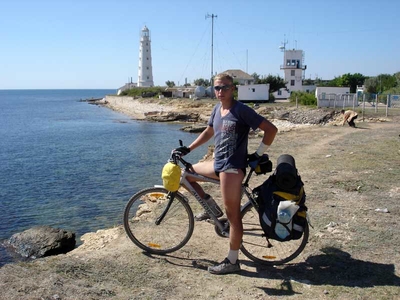 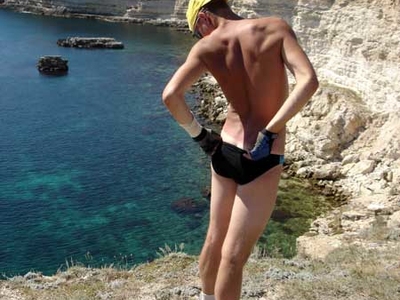 After Mizhvodne our road again ran on the beach.
Fatigue the procedure have accumulated in our bodies.
The sun was already moving toward the horizon and we needed to catch up on NOCHECK.

Generally this part of Tarkhankut from Mizhvodne to almost bakalskaya spit why it is very deserted.
Although here you can find beautiful secluded beaches.
Beach quite clean in contrast to Atlesh (near Olenevka)
And in principle it is possible with great pleasure to hang out here for a few days. Swim, sunbathe and indulge in delicious idleness.
It's probably one of the few, especially my favorite in the Crimea places.

Up to last year's Parking we did not get, but found a sandy beach covered with broken fragments of shells.
And a little overwhelmed with algae thrown on the shore.
Pick had and the litter dried sea grass, we did better than any soft bed.
After dinner came off on the purchased grapes.
And had a great time talking.
It's time to tell about my companion Ilia.

Brief information about the person involved:

Trying to comprehend something new.
Loves cross country and Alpine skiing.
Rollerblade and swim.
And of course, his beloved bike! He is always ready to goI co him to the next trip.
Work for him as a hobby, only to Wake up for her regularly before.
Not married
Has a military girlfriend
Loving
Morally beremenostyu
In relationships, discrediting him, I was not seen

Fell fast asleep, and, it seemed, nothing foretold for me no cataclysm.
And he however snuck up on me.
With the first rays of the sun pozolotchiki the horizon.
◄ Prev
Next ►