Cycling / The Megan Binom: we and the sea / Roadside Inn

Two brothers Alex and Andrew arriving with us to Yalta decided to continue the journey without us.
The idea of riding on a dusty and treeless Tarkhankut they are not fascinated.
They decided on the train back to Sevastopol and to go further along the South coast of Crimea.
I already privie two days and was sorry to leave.
But they were nepokobelimy:)

Education: . mathematician-system programmer DOP. education: trainings and additional education in the field of trade and management personnel. Work: Petromaks-the Deputy chief of Department of planning and Commerce references: Life I order I put the experimentation on a human body..... type c kokogo times broken leg if you jump on a snowboard or drive through the woods on bike )))) work leash in order that money was for travel and vacation! Extreme! A young man but already a promising E . Looking for adventure on his head and sometimes Brother! In the summer of passionate trialist Winter crazy snowboarder ..... Petromaks of speditor company company expediously goods Education: St. Petersburg c.University B Western To municate. Engineer-electrical mechanic. There's a special Operation of the main power set to K and the auth to Work: JSC PMS shipping: pc th agent (agenti tion in, shipping) About myself: I like all Thu more interesting. E Rami (led siped and SN UB rd), REM, travelling, books, music I. . ..........b... .... . .

Hastily having had Breakfast of oatmeal, Packed up their belongings and went to town.
Just in time for the departing train.
The guys waved at us, let avaricious man's tears (mentally) and again we were left alone with Elijah.

We were just wondering whether to risk it and to go to Tarkhankut through the city of peace.
The fact that there is a thin isthmus between lake Donuzlav and the sea, dig for ships.
And whether you will cross to the other side at some plavsredstv we don't knew.
The opinions on this matter among the local population and even! taxi drivers are very vague.
It is surprising but nobody really knows how things really are.

As a result, decided to go a bypass way through Alenitsky bridge.
Certainly a decent hook, but he, as they say, mad dogs:) 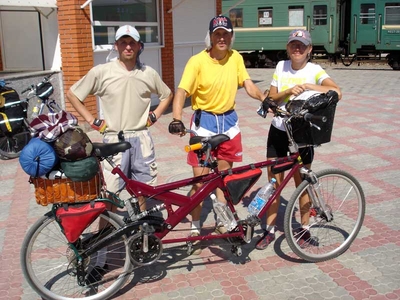 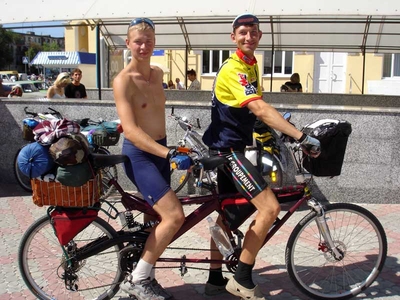 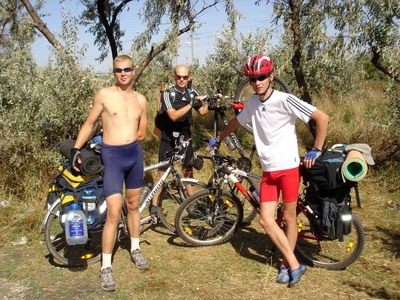 From here we saw supertangas!
Homemade and. A couple from Donetsk traveled this way.
With great pleasure talked to these guys.
The husband shared his secret of how to ride a tandem.
The main thing is to put back the wife!
She kind of still hangs like a bale of rags, but does not prevent the piloting of the bike.
And if you put back the man, he instinctively because of its natural essence will still attempt to control , to pull the body and can fill the unit at full speed.

I've noticed that many Ukrainians - especially young age are traveling on this Junker.
Or the old Soviet bikes or self-made monsters.
They will never find any modern bikes.
What it is - a nostalgic attachment or forced I don't know.

Route from Yalta to the Donuzlav lake is nothing remarkable.
Going as usual and I think the miles on the counter, and their order of 40.

The truth is halfway remarkable for us a place.
It is located in the village of vorobievo and is a local diner -cheburechnaya (if coming from city it is on the left side of the track)
It we always, and pulled away.
There bake good hot pasties, you can pohlebat cheap Ukrainian borscht and always plenty of beer.
Especially loved Chernihiv "Biel".

I must say that I'm not a big connoisseur of beer as such, but Ukrainian beer is much tastier than the Russian. A fact not to be questioned.
VProchem this applies to many of the local products.
For example chocolate "Crown" (not to be confused with the Russian forgery "Karuna")
Or gazirovannaya drink "Zhivchik".

Hour chill hardly certainly benefited our pedaling, but in the end we did not race the Tour de France.
After a roller-coaster in the area Ablanitsa bridge turned left in the direction of Novoivanovka and Medvedevo.
The weather is warm, the track a smooth (as possible in the Crimea)

Two hours later we were in Znamenskoe and the dirt road went to the sea.
Last time in these parts I was a year ago when it was raining and we did a forced day of rest on the beach.
But Marat went for groceries in the village and scored clay the whole bike.
Then there it was completely deserted.
Now the picture is strikingly different - a lot of cars, tents and people on the beach. 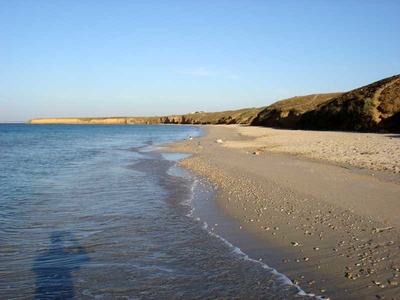 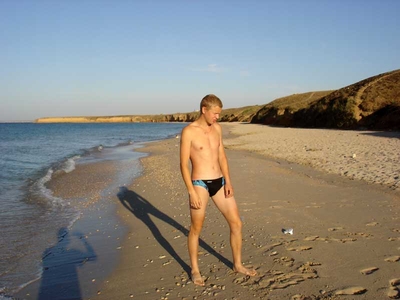 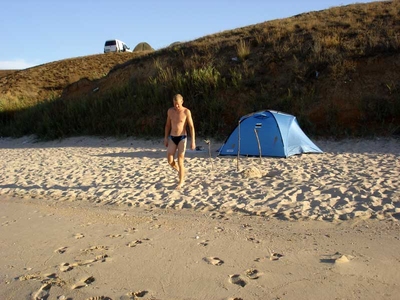 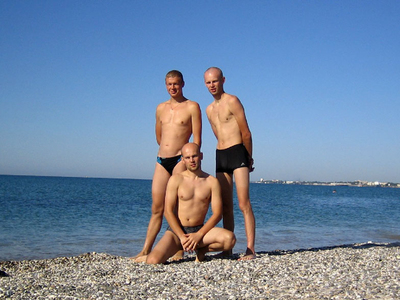 But we knew that 99% of them with the onset of darkness will leave and nobody will prevent us to enjoy the sea and the fine sand almost alone.
And so it happened.
We went down to the beach put up a tent in any place and indulged in a well earned rest.
Tonight I'm essentially a first time for everything the past few days normally bathed.

When the sun goes down a sense of deja vu has penetrated every cell of my body.
Like I never left it a year ago.
Here Marat wash my bike in salt water, not thinking about rust, and Rinat back his worthless rod canopy has a tent Lafuma.
I hear their voices under the quiet lapping of the waves.
We are at the very beginning.
We are younger for a year.
And that's a waste of time for a person and so insignificant to the Universe.

"In order to restore youth we need to repeat its mistakes" said Oscar Wilde.
Oh, if that was possible....
◄ Prev
Next ►