Cycling / The Megan Binom: we and the sea / The fatal grape

Perhaps there is nothing more peaceful than waking up with the first rays of sun on a deserted sea shore, under the quiet rustle of waves.
From yesterday's excitement has not disappeared.
We had nowhere to hurry and the path was broken only thoroughly after eating and bathing.
Driving through the town, was unchanged dog barked and cursed the unchanging watcher.
Well, that offended them - they have such a job.
They pay money for it and feed it bones.

Half an hour through the stones and here it is Fox Bay.
This time why it was a little bit of absolutely naked body.
And we are not stopping went to the beach.
The going was much harder than last year.
The surf washed away the thick edge of the sand and the bike was rolling the rear wheel.
Had to sweat, moving it forward inch by inch. 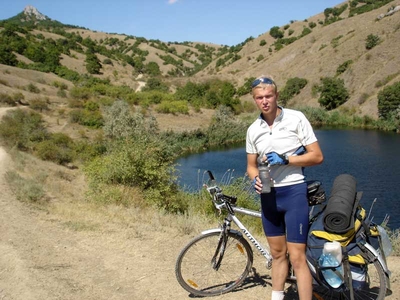 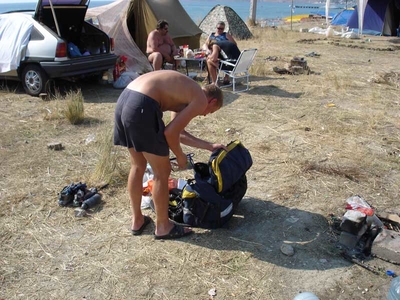 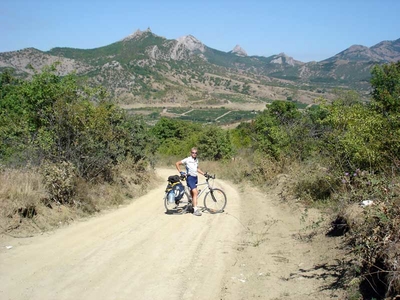 Beyond the beach turned onto a dirt road and deep into the mountains.
The spurs of Accidia in all its glory monumental grizzled against the clear sky.
Through the vineyards of the Koktebel ' sovkhoz drove on the road leading to the Shchebetovka.

The route leading from the former Gliders are very picturesque.
She goes around the nature reserve Karadag in an arc.
And surrounded by nothing but vineyards.
Halfway I saw my aunt sells solar berries.
Nearby was a spring and Ilya went to him to drink.
I chose a few inexpensive varieties(among them my favorite Chaush) and bought a few pounds.

Well, then something happened what I am ashamed to write.
I fell off my bike for the first time in my entire life.
Was driving holding the wheel with one hand, and secondly, a package of grapes.
On the side of the road, front wheel hit the sand and heavily Laden bike took.
As a result, I painfully hit my knee and tore my hand on the asphalt.

When Elijah returned with UDIphenomenon discovered his infallible companion with hydrogen peroxide and iodine at the ready.
Licked wounds and grief to devour a kilo of the Crimean delicacy we moved on.

In Koktebel, not without difficulty, found our Ukrainian friends.
They stood in the camp in a small campsite.
However, this name was too loud to lawn with garbage and a bunch of cars.
Among owners which is allocated colorful vast family of organic sizes.
All the time they spent at the field table, absorbing a variety of food.

We were greeted very happily, and the truth is we were also missing those cheerful guys.

Setting the tent dined in the company.
And when it got dark went with Ilia in search of adventure in night city.
Illya simply could not exist without disco.
He itched some place while he won't be there.

However if you remember your youth, all was well.
We walked until one o'clock, but all the discos, which were not the same.
Honestly Koktebel I like much less Walleye and our boardwalk only made otvertetsya in this opinion.

By the end I wanted to sleep and I left the hard-nosed Ilya one.
He refused to go to the camp and said that after you drink a little beer will go to the first disco.
I with a light heart, left the other and lay down in the tent to rest.

Ilya returned again in the fourth hour. Through the half-sleep I saw him fumbling with the sleeping bag, breathing the fumes.
He has clearly succeeded.
◄ Prev
Next ►