Cycling / The Megan Binom: we and the sea / The ruins of the universe

The ruins of the universe

Half the day is spent in a relaxed rest.
Swimming, lying on the sand.
And enjoyed a gorgeous secluded location.

The road was broken in four hours of the day.
Again drove through Sun Valley and through Bogatovka for Zander.

The head was already empty.
All our plans fulfilled and our stay in the Crimea smoothly its course was rolling for the rut.

We had to spend the night as close to the perch the next morning to catch an early bus.
To do this, before reaching the town we turned to the sea.
From the Cape the French moved out to the coast.

There was located the ruins of the unfinished sanatorium.
Such abandoned with the collapse of the USSR buildings in the Crimea a lot.
Overnight money turned to dust, a large country rostralis scraps at the national and all-Union health resort departed Ukraine. 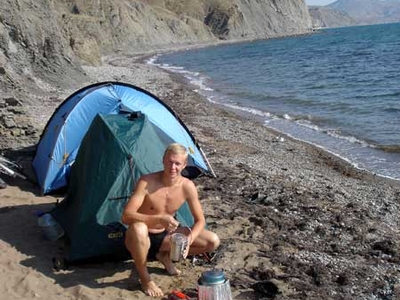 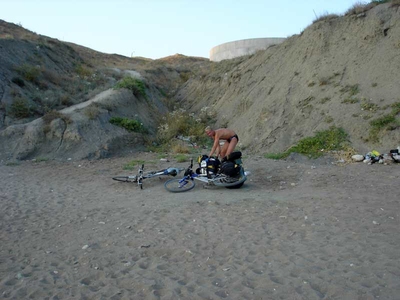 Remember the beginning of the nineties - the storm on the Peninsula.
It's like he froze, stopped his run.
Everything came to a halt. The people rushed to aswapati abroad.
Turkey, Egypt, Spain have replaced our citizens of Crimea.
And only after 2000, things started to gradually recover.
But came other problems.
The Peninsula suddenly became again a tasty morsel.
Crimean Tatars fighting for a place under the sun, NATO troops seeking to make a foothold here, Ukrainian nationalists opposing Pro-Russia citizens.

Driving along the concrete embankment of the resort, found a little beach almost at the foot of the Cape Alchak.
Here and settled on your last night.

The next morning, went to Sudak bus station and after necessary discussion with the driver and passengers because of our bikes made it safely to Simferopol.
Ilya was away for 4 hours before me.
I took him and somePoE time running around the city, saying goodbye to the Crimea until the next time.

Perhaps my story about our trip wasn't that entertaining and dynamic as the last.
I just felt that all I wanted to say about the Crimea said.
And the report came out a few secondary.
However, this did not mean that I am bored with Crimea!
I will gladly return to it many many times.
◄ Prev
Next ►