Cycling / The Megan Binom: we and the sea / Ukrainian revels in the fresh air

Ukrainian revels in the fresh air

Despite a relatively flat place to sleep had the inclination.
Tossing and turning at night all the time slid to the end of our abode.
It was hot and stuffy. I almost completely got out of the sleeping bag.
It's amazing how I didn't tear the tent of their nails.
Ilya nozzle slowly around, occasionally smacking his lips.
Perhaps he dreamed of something pleasant.

The sun woke everyone up pretty quickly.
To sleep in quickly heating up the tent was impossible.
Night scratching his unshaven out of the tent finally got out and my companion.
Ukrainian boys are already swarmed over Breakfast.
And someone even climbed up on the little beach.
The road to it was a lot of climbing.
In one place it was necessary even to hold on to a metal rope and climbing almost vertical stairs.

Ilya did everything quick.
Movements I cooked porridge and tea.
We had Breakfast and said goodbye until the evening with our newfound friends.

Elijah wanted to visit the underground shelter for submarines in Balaklava.
Remembering that last year I was left to guard the camp and had not been there, I was wondering about that.
We quickly went down to Balaclava, along the way having to wash in a certain spring where it was written that to drink from it is not recommended to avoid goat mutations.

To drink we of course did not drink, but ridden in the mountains no worse than these creatures. 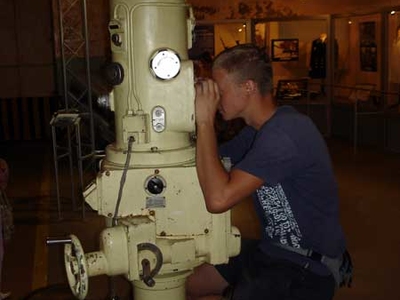 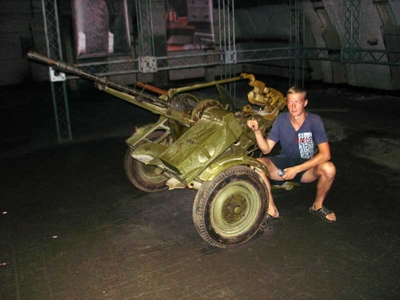 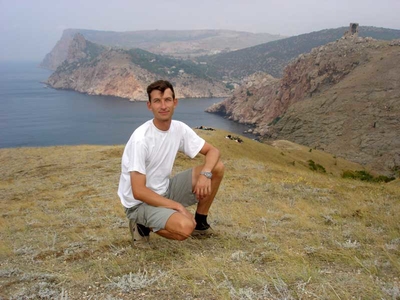 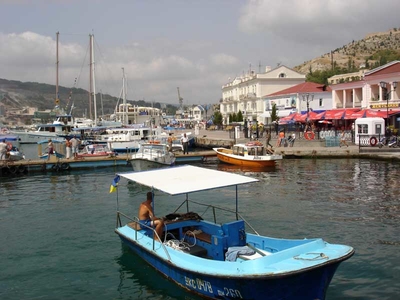 Two years in the shelter much has changed dramatically.
Held the light, and now had to walk with flashlights through the tunnels.
In dangerous places put the railing.
Housed the exhibits. Cleaned.
And even built in one of the underground halls of the Museum of the Armed Forces of Ukraine.

The guy tour guide told us very angrily about everything.
The reason for this became clear at the end when tolPA tourists melted away and I talked to him alone.
The man lamented the fact that he has given to him to repeat the text that strongly supports the role and greatness of the Ukrainian army and hushed up the story of looting by looters of this unique construction, with the connivance of the authorities.
In the voice of a middle-aged man seemed to reflect genuine bitterness for the lost times and past glory of Soviet weapons.
He said he could not add anything from itself, otherwise it will be fired, and the work is tight.
Besides, he figured in the ranks of the tourists disguised as an officer of the armed forces of Ukraine.
Whether he has a nose for them, whether sees in each corner.

In General, the special joy of visiting this asylum, in principle, can not be.
So cheerful Sunny Crimea shows us its seamy side - the dark side of existence, where many of its indigenous inhabitants.
As if written by an invisible writer a tale of friendship and nadroga two Slavic peoples, the fates and the powers that be has become an overnight antagonist.

And like a wedge into the bleeding wounds of mutual hostility is driven in addition, the people of Tatar.
And all this tossing and turning into each other, scattering splashes of hatred and lumps of someone's life.
And it seems no this all end.
Generally it is easier to hate than to love.
Love is work, and daily and hourly.
And hatred, like a mountain stream, as the rural - rolling wave and picking up speed, sweeping away everything in its path - and the city and civilization.
Too young, our humanity, and still repeatedly stepping on the same rake.
Small our Earth to cherish it and each other on it and not to share.
But no - all share and share incessantly. 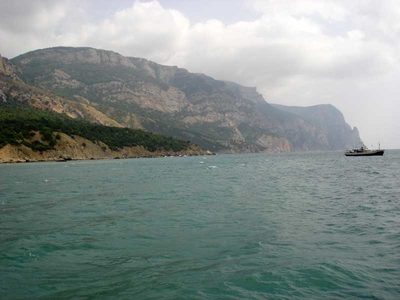 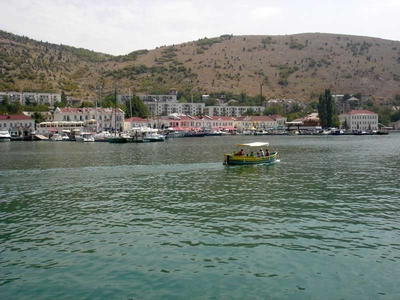 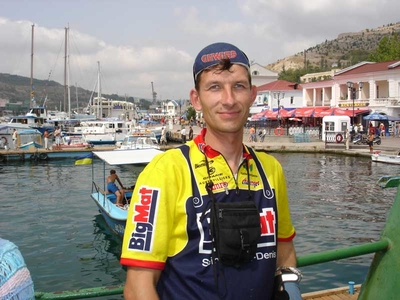 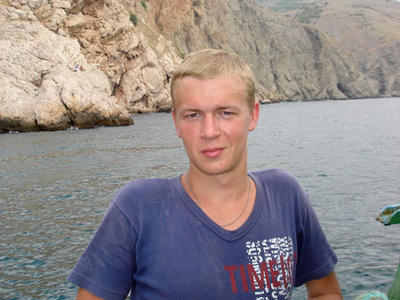 Nudeshemale lunch in the canteen near the waterfront a few cheer.
A bowl of soup with salad and mossy again energized.

Now we had crossed the same on the Gold PLTTN.
What we successfully did by boat.
Every time he slowly comes up from Balaklava Bay overwhelms me like a wave of time.
I vividly imagine the submarines under cover of night, moving on the repairs.
The quiet hubbub of a naval city, the right time, the sound-savvy army of boots on the cobblestones of the quay.
Portraits of Stalin and eloquent posters with a harsh aunt and says, "don't talk!"
Time when about the Balaclava very few people knew when everything was shrouded in mystery when he had the chance to shoot upon the slightest suspicion of espionage.

And now every year the city prettier and alive.
He increasingly resembles a bustling resort with hordes of holidaymakers with inflatable mattresses and sun umbrellas.

The boat sailed at the foot of Chombala and rushed towards the mountains towering over the sea.
The warm wind threw salt spray in our flushed faces, and it seemed nothing on earth in that moment people happier than us.

Dragging our Luggage uphill over huge deposits of boulders - it is not pleasant.
But it was necessary to cross the beach and reach the forest.

Our last place was busy and had to anchor nearby.
Debris all around it distribute quite some time had to spend on cleaning.
While Ilya and I settled down and bathed pulled up and a gang of Ukrainians.
All found a place in a small clearing.
The trouble the sun went down and we gathered for evening gatherings.

The guys built a small fire - it is even for this place wrong.
For things local foresters no doubt charge a penalty if you stumble.
And my heart bled twice after Scandinavia where it is forbidden to light fires outdoors from may to October.
I got so into the local law and reverence to nature that it was difficult to reorganize internally to the usual in our country lad.
Still probably there is some element of education when I see people carefully live.
And in the Crimea, such a marvelous places to eat and hate to see crap in them and not very organized tourists.

The guys from the Ukraine were different from us, Ilya and his irrepressible southern temperament.
Was noisy, cheerful and talkative. The energy seemed to beat out of them is key.
Ilya more or less quickly tuned to the desired wave and I felt completely inhibited and unnaturally soothing. Against his custom didn't want to fuss or make any extra movements.

There were two girls in our company - Tanya and Vika.
But if Vic was busy on life ,Tania is on the contrary constantly throwing unambiguous views on my companion.
Ilya she obviously liked it and he felt it.
And all the time whispering to me: What do you do Igor!
He stopped only an unwavering sense of duty to left in the Peter's girlfriend and conscience developed over long hours of sitting in front of a computer. 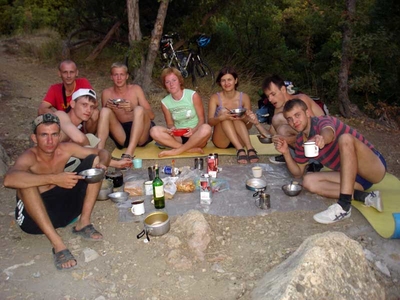 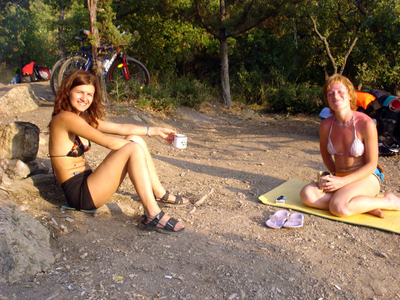 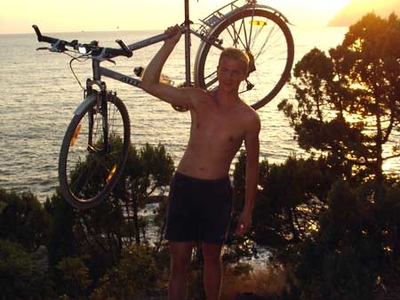 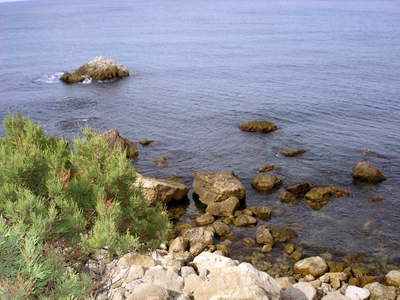 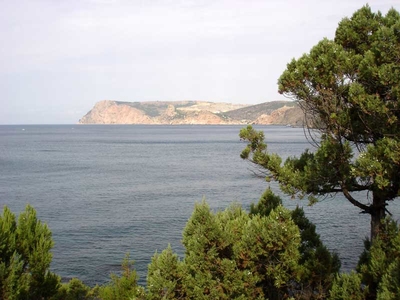 By nightfall, it became evident, as the lights are lit bonfires around.
Each clearing and a little bit suitable for Parking place was of course occupied.
Coastal forest teemed with people - mostly of course Hiking.
Hunters romance, vagabonds by vocation, not recognizing a civilization.
Dozens of completely disparate businesses of all ages, nationalities and religions.
This night was completely United, covered with spicy pine branches and merged into one under the warm and gentle wing His Majesty the Crimea.
These people definitely had nothing to divide among themselves.
It was a Peninsula native and a shared forever.

You just sit around the campfire and chat soon tired of it and have time for fun.
First, someone ran to the neighbors for a guitar and began to sing national songs.
Then came the turn of pantomime.
Odin person went to the podium and signs and gestures tried something or someone to portray.
The condition was one not to utter words.
And the others were leading questions to find the truth.
One who did - took the place of the silent and the game continued.

It was amusing to watch the antics of the boys.
Acting some could quickly guess that they want to show. Ilya also participated once in the clown.
He squatted, waving his hands away and hissed, went extra step and blinked her eyes.
Could not understand what he has in mind.
Until someone very smart came out on the truth.

The wine was drunk and his eyes began to stick together.
The boys scattered in all directions.
Tomorrow we waited for a new day.
◄ Prev
Next ►