Chapter in which the child instructs Carlson to the true path, and he struggles with greed

- So, someone lost a wallet. That poor man! He must be very upset.
- Of course - picked up Carlson. But the coachman must not be zero.
- How do you know it was a cab? I was amazed the Kid.
- Yes, I saw how he lost his wallet, ' said Carlson. - What is the driver, I realized the hat. I'm not a fool.
Little reproachfully looked at Carlson.
Do not behave, when your eyes someone loses a thing is it needs to explain to Carlson.

I apologize in advance for this card.
The fact is that because of the rain a piece of a detailed map from Halmstad to Gothenburg was irretrievably lost.
Wet, easterly and roll up a roller blotter.
Did not help even a plastic file in which we are stuck.
The map I carried all the time on the wheel and not always have time to clean up at the beginning of the eruption of the heavens.
Because of this and the next Chapter, you will have to conjecture coastal relief relying on my depiction.

The morning of the 19th of July.
Impenetrable Khmara not the sky .
Periodically starts and stops the rain.
The mood is at zero.
Breakfast had to cook in the vestibule of the tent. 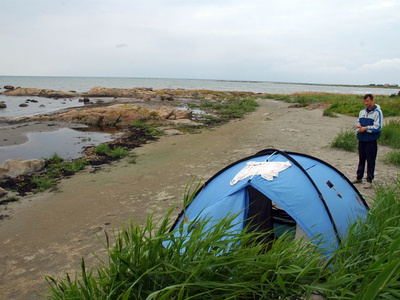 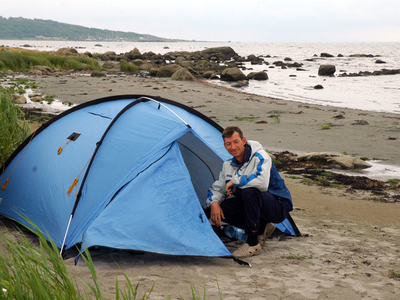 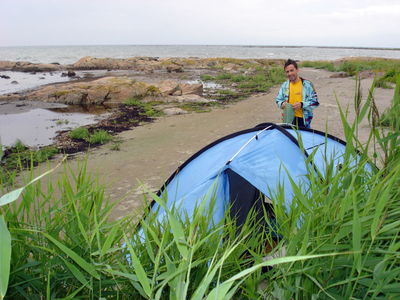 Took a collective decision to wait for better weather.
Did not want to gather in a damp and wet stuff.
Rinat was still less against that the last time he was very tired all the time and was not in the spirit.
And I didn't mind to take a NAP yet.
As a result, we were lying before lunch.

Rinat slept soundly lethargy. I periodically got up and went out of the tent to look at the dynamics of weather.
A couple of times passing by the locals in rain capes, dog walkers and looked in our direction.
I felt it best to politely say Hello to everybody.
Suddenly we accidentally stood still in their territory.
But claims no one has been charged.
About two o'clock the rain stopped, I pushed his sleeping beauty and we started collecting.
Dally was more than once.
Left about 15:30, it Was cloudy and damp and cool - about 18S

But the weather is not going to give up.
I anxiously looked at the huge bushy clouds blacker than tar incident from different angles.
As we did not try to turn the pedals wind speed and our wheels were incommensurable.
Close to Falkenberg, we were covered in full.
All that rain we have in Sweden are not taken.

We barely had time to turn off the road under the canopy of large trees growing by the fence of some private house.
Sharply colder degrees to 14.
The rain was very strong and the trees didn't last long. The jet began to seep through the leaves.
My vaunted and supposedly tested three times Columbia jacket got wet on two.
Wearing she was lalomanu and wet jacket sleeves from sticking to the bare body. Not a pleasant feeling.
We got some pieces of cloth and cover them with your head.
Rinat prudently before leaving, put on Cycling leg warmers covering his legs entirely . I was not and I was in velotrack.
When pushing for the legs not cold.
But now we stood under the streams of water are closely pressed against each other and chills small cockroaches pobejali on my skin.
From perhaps the sight was very amusing.
In the building of the fence stirred the curtains in the window. Apparently the owners have admired in us.
SX I thought it would be nice if we were called to the house and drink tea.
Or at least under a carport when not in the house.
Haha tea is just not to get wet.
But alas. It was our problem and nobody has been talking aboutto show hospitality.
In Sweden, individualism taken to the absolute.

Rinat pulled out a backpack an opened second bottle of vodka taken from Russia.
And we lucoli grams for 50 to warm our sublime natures Cycling.
Gracious warmth spilled life-giving streams for our bodies faded and the world began to play again with colored inks.
Circle ran through the fields rabbits and watching them brighten up our expectation.
Half an hour later the rain has abated and we drove on.

Driving through one of the many small coastal gorochov, we saw on the sidewalk a discarded folding chair.
These recently sold and we have in Russia.
Metal tube and a dense fabric stretched over them.
Is not less than 1000 rubles
Apparently someone dropped it passing.
Rinat lit up.
He was looking forward to as it sits on the Bay and throws his long-suffering rod in sea water.
Somebody's loss is our gain.

He certainly would have taken the chair with him if not your humble servant.
I am for two weeks then soaked in the Swedish spirit, and even to think was not the Russian way.
And reasonably objected his friend that lost people will certainly sooner or later missed of the loss and to come back for her.
Rinat began to rebel and prove to me that the chair won't lie here and 15 minutes as it is, someone's going to get.
And only a complete jackass could pass up such a wonderful and necessary things in the economy.
Under the animal presumably meant me.
However, using his athoritarian right chief I talked to Rinat for this experiment.

We rode some distance and hiding behind the corner, began to observe from afar the chair.
We stood for about half an hour and during that time four people walked past.
Neither gray-haired handsome gentleman or a woman on a Bicycle, nor a boy, even the eye is not taken towards our object.
Itonly the old woman, slowly hobbling about their business, for a second, bent down to see what lies under her feet.
Looked and went on, not touching the chair even with your finger.
Better to stand and make sense.
Rinat was struck in his most innermost feelings.
And the rest of the way, dumbfounded and babbling about nothing do not understand in the life of Swedes. 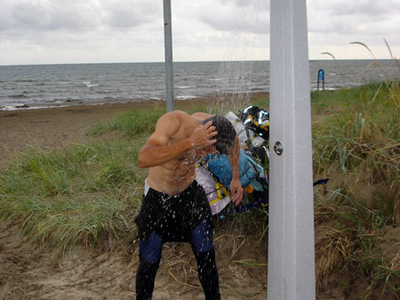 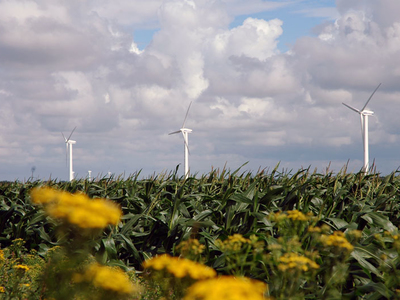 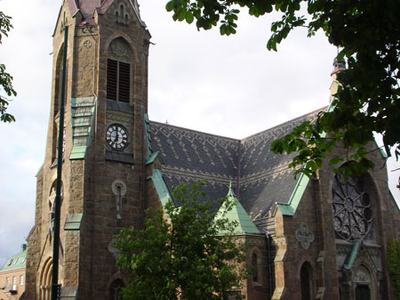 After Falkenberg (Falkenberg) started to look for a place to sleep.
In the area of Strange (Straninge) turned towards the sea.
Went to long beach.
The wind blew with great force and put the tent up here was absolutely impossible.
But we found a stand with a beach shower.
And Rinat despite the cold and the wind decided to wash my hair.
For some reason he flatly before refused the tried and tested still in the army and used me the way wash head and body in the conditions of shortage of fresh water.
It was an easy decision. For this was a shortage of one-litre plastic bottle.
Cover a little bit turns and the water is not even a trickle, and small quick drops on the subject of bathing.
At known skill, in principle, you can do a half bytylka to clean up entirely.
But Rinat was walking a bunch of all sorts of complexes and did not want to follow my example.
The maximum that he was willing to wash so feet and clean teeth.

Therefore, the shower column was a gift from heaven for him. Still ride with the unwashed head in a civilized country is bad:)
Shower and everywhere was a La carte.
Press the button and a minute to wash. Well at least for free.
Rinat bringing turnips to the compliance with international standards of purity started to look for a Parking spot on.

All the West coast of Sweden is constantly blown by Atlantic winds.
It is hard to imagine how the coast people live here.
This dutie very annoying.
Actuaschool of course, compared with prosperous East coast here salatica people with modest incomes.
Already a lot of old cars and houses much easier.
The tides here are almost invisible, but the wind not permitting to put the tent on the beach much to the frustration of Rinat. He is one of the ideas fix.
But this time even my friend creaking brains and compromising principles agreed that you need a windless place.
We have numerals the day notably. 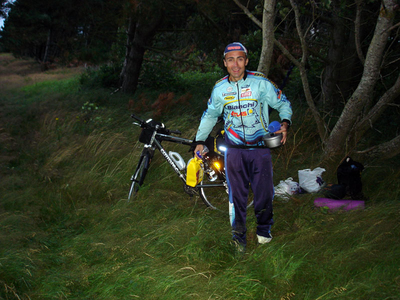 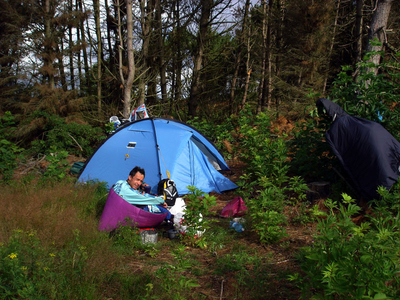 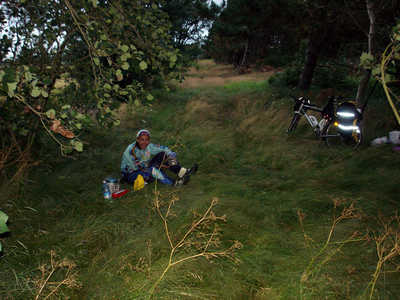 So going through the map to the next beach we saw on the way a wind-proof forest belt between the two fields and turned back.
The trees at the very poor, quenched with streams of air.
But it grew at an angle to the sea.
Constant unilateral tension forced their trunks to grow some in defiance of gravity.

We dismounted from our horses and sitting on the soft mossy tussocks embarked on the most pleasant pastime to come up in the campaign.
Yes, Yes, exactly! There!
And then to sleep
All other pleasures were not available to us or moved to the third plan

Quote from the diary of Rinat:
"For two weeks from the women's tribe-we only had foam and rope"

The tent I was able to successfully stick between two trees.
And even the branches and roots pierce into us through the bottom did not stop us hard to fall asleep in an instant.