Cycling / The new adventures of the Kid and Carlson / It's Russia, guys!

Evening Northern capital greeted us with drunken men at the station, annoying Gypsies and declassed individuals collecting bottles for the polls.
Before, I never would have paid attention to them.
And now it was staring me in the eye.
Human crowd gave off vibes of aggression and malevolence.
It seemed my feelings suddenly intensified to the limit and I see and hear what was not there before.
Peter, after a clean and well-kept Scandinavian cities, was some sort of gray, arrived like dust and moth-eaten old luxurious camisole, fashioned out of the trunk, where it lay for hundreds of years. 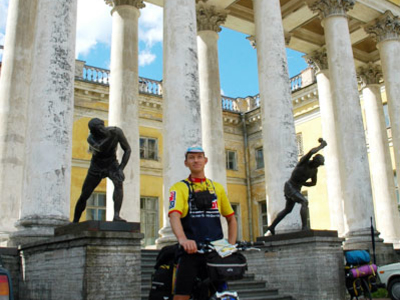 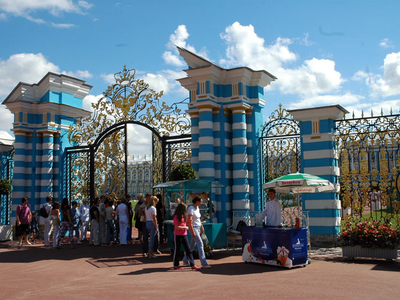 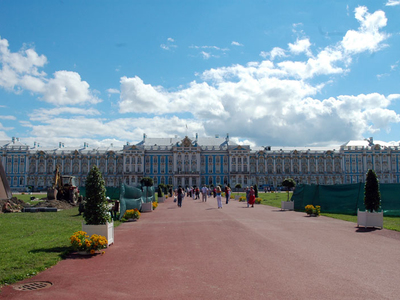 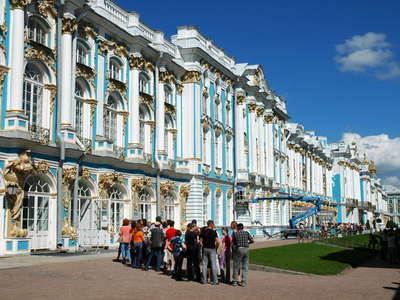 First went to buy tickets to Ufa at the station.
Of course they were not.
Wasn't even on this and the following day in Moscow!
Our journey truly does not want to end.
Especially upset Rinat.
He already saw himself surrounded by fans and groupies and here's the hitch.

We came back a firm "rainbow".
It is difficult to convey Slovak all the gratitude that we felt and feel to this welcome and otzyvchiv people.
We camped for the night at the home of an employee of this company - girl Irina.
For what it separate thanks.
All the same, to shelter disinterested two strange unshaven sweaty men is an act close to the feat:)

And the next day in the morning we went again to the booths.
Veloryukzaki took with him, for he asciival to go still immediately.

This time we were luckier and I suMel has purchased two tickets to SAMARA! in compartment car.
And from Samara to Ufa.
There was no choice, and had a transplant.
In addition, the administration was postponed for another day.

And I asked Rinat to not jump on Peter to go to a bike ride through the surrounding towns famous for its palaces.

It is done!
And we drove on Moscow Avenue in the town of Pushkin.
In the Catherine Palace I've been twice but both times in the winter and wanted to see how it looks in the summer.
On the turn from the highway towards the city I saw a terrible accident. The truck crashed into a bus with German tourists.
When we were driving - the dead and wounded had been taken away but the police blocked the road and were not allowed cars.
But to us it was all the same and we drove on the empty highway to their goal.

In Pushkin, we drove up to the Palace and made few pictures of it from behind bars, listened to the guide attach the back of the crowd.
However long we were not allowed to listen to, and strictly said that we are strangers in this group and to bugger off home.
Ate ice cream and rode through the Park around the Palace.

When leaving - aunt of a Concierge at the gate screaming - How did you get passed! Here you can not ride!- tried to stop us.
But where there. Is it going to stop flying two-wheeled horses, is forced to slow down developed muscular legs adept in the vast Scandinavian Peninsula!

Our next stop was to be the Pavlovsk Palace and Park.
Drove up to the entrance and saw that there is also sell tickets.
Rinat pay of course didn't and we drove back in the direction of the railway skirting the Park's perimeter, hoping to find a loophole.
And of course found the entrance for those who are reluctant to pay. 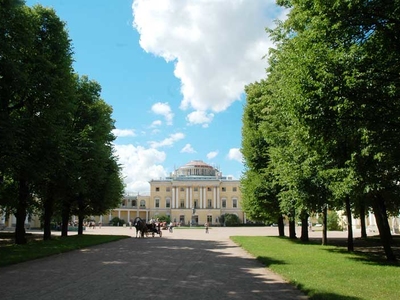 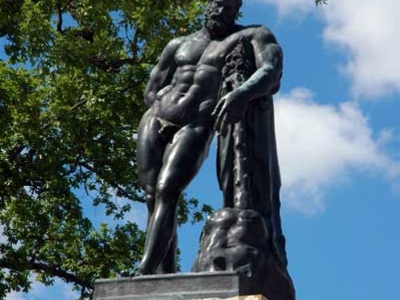 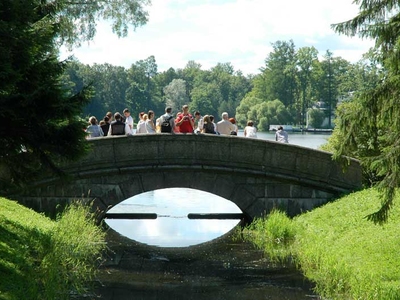 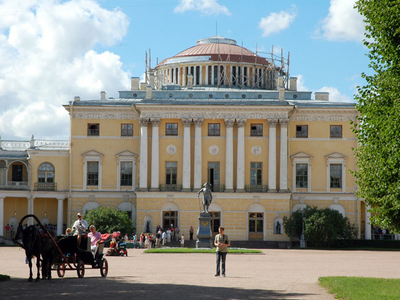 For two hours we rode through the beautiful shady Park.
Lay on the grass near the lake, have a bite.
Rinat took a NAP as usual.

And after lunch, pricked up his skis in Petrodvorets.
I wanted to see the famous fountains in action.

We went by the shortest road was on the repair.
And a decent chunk of it had to shiver on potholes by excavators and cement mixers.

When, after passing round, reached Peterhof was already five hours.
We went through the gate to the Park.
But only went to the pond with a statue in the middle.
As here with all the cracks we have got the men in black uniform.
Even from a distance began to shout to us that we immediately got off the bike and that there is no place for such shit.
Rinat began to glow with a righteous anger and say that we are known in a wide circle to a narrow public veloputeshestvennikov that we stopped by the grounds of the Royal castles and that we drove through Europe, and everywhere we were red carpet and the bread and salt.
At the guard grinning replied with a challenge:
"Ha! Europe! This is Russia you - guys!" 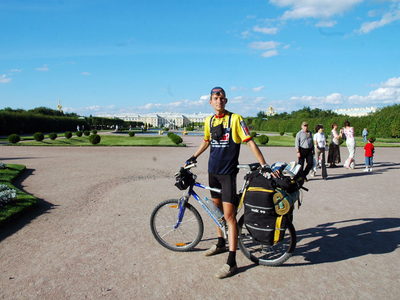 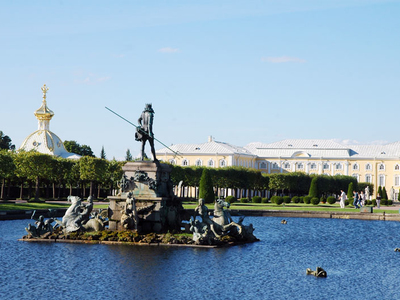 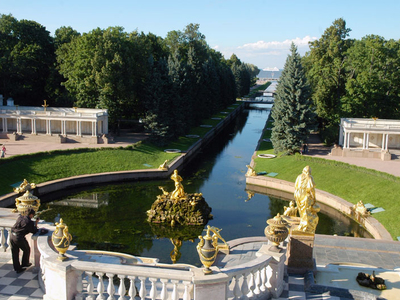 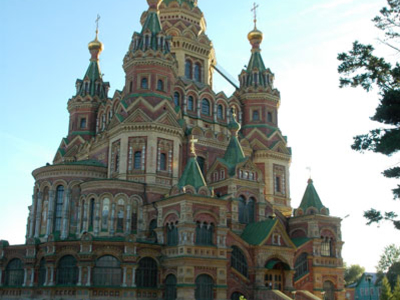 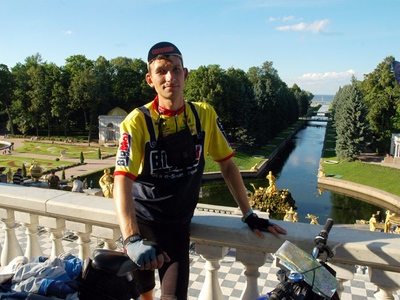 Against this argument does not trample and had to dismount.
We managed to bargain with Cerberus right foot from the bikes for a walk in the Park.
At the fountains we were late - they is worked up to four, and the Park soon closed.

The mood is spoiled.
And we are wandering around the Palace, went down to the Bay and a little after sitting on the rocks went back home.
On the way saw a small water puddle where the big bucks could go fishing for trout and other valuable fish.
Was talking with a man who was assigned to this case.
Remember the Swedish skerries and rivers full of fish, discussed befouled the Gulf of Finland ,listened to his complaints about the hard life and quite happy with each other and I broke up.

Went to Peter back through Strelna, where the distance looked at the renovated Konstantinovsky Palace, the new residence of the President.

About nine in the evening we again asked to wait for nyour welcome mistress.
She must be very happy seeing us again, but did not show it.
And soon we tired, were sitting in the kitchen with Irina, drinking Crimean wine bought in the local shop, had finished the remains of the Swedish bran bread and crisp bread "VASA"
As the last Hello from the other side.

Next day - the day of our departure dawned cool and rainy.
And we half sat in his office, "Rainbow", chatting about this and that. 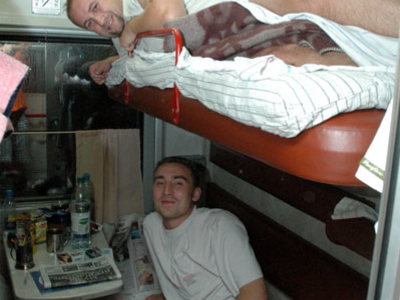 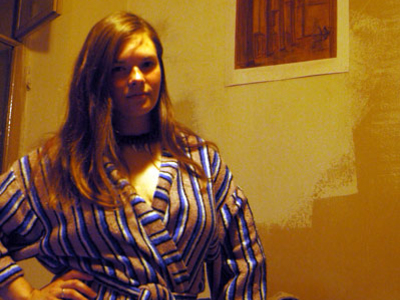 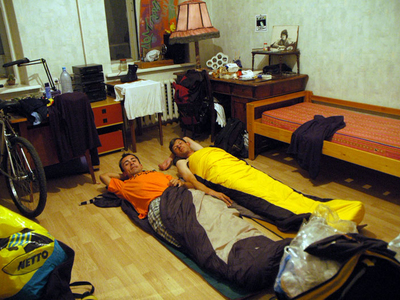 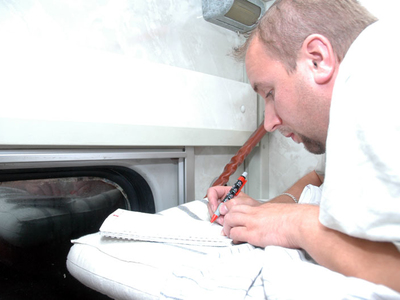 And then there was the train, where we met with the full good-natured Czech by the name of Ziggy.
He came to Russia to sell the fireplace, loved the beer and especially the Czech.
And in Russian too much gas he said - drink bottle and the stomach is inflated.
While the Czech can drink liters.
Cech was cheerful and relaxed, talking loudly and thunderously laughed.

I was lying on my shelf, looking at Cech and sad thought.
After all, Russia is still made out of all sorts of bans, security guards, scowling faces , rudeness and arrogance, disrespect and insults, greed and disregard for their fellow citizens.
And at every level, from government to ordinary people.
Maybe something is changing for the better, but end not yet in sight.