Chapter in which Carlson becomes junk, the Kid suddenly give Danish guards

The kid admired the changing colors in the sky, and Carlson didn't pay any attention to it.

But when they were sitting here side by side on the porch, eating biscuits and sipped their juice, the Kid clearly understood that this night not like other nights.
"And this house is like no house in the world," thought the Kid.

Nowhere is there such a cozy room, and a porch and the amazing view around, and never collected together so many amazing and seemingly pointless things like this.

Saying goodbye the next morning with our hospitable place on the shore, which gave us shelter for two nights, we went back to Sweden.
Went to Elsinore and again was exposed to this unique flavor of antiquity.

"On top of the way, Elsinore didn't seem appealing, wrote at the time, Hans Christian Andersen , but now that I live here, it reminds me a little Copenhagen; the kind of traffic on the streets!
What kind of recovery in the port; talking to your deaf language to the Dutch, I hear the harmonious Italian, and then unload coal from the English brig, and I fancied the smell of London.
The sound is dotted with ships that, like the gulls, swooping along the coast".

Honestly the current Copenhagen Elsinore I was not reminded.
With great pleasure I would spend a few days if you had the chance. 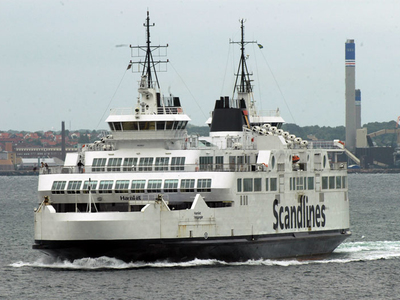 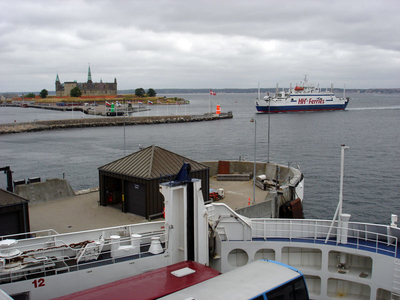 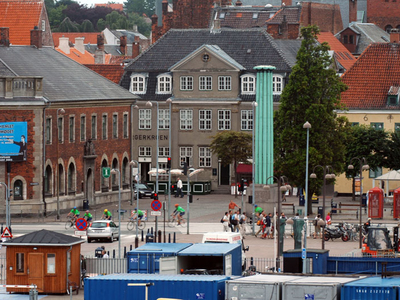 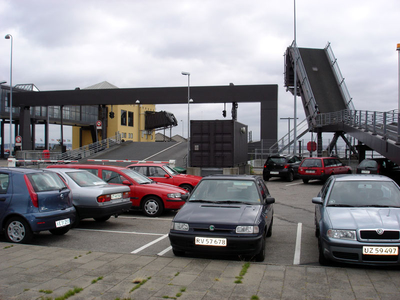 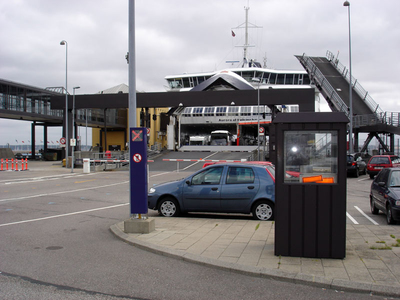 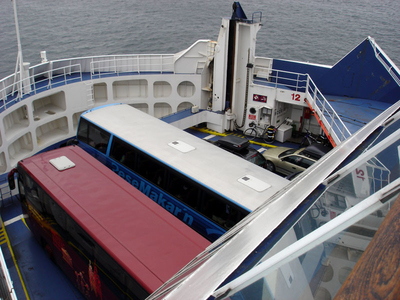 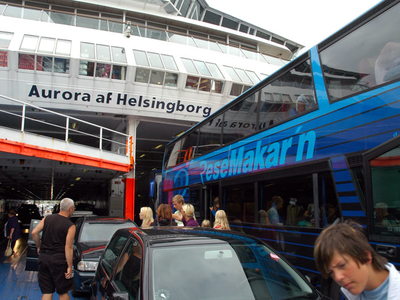 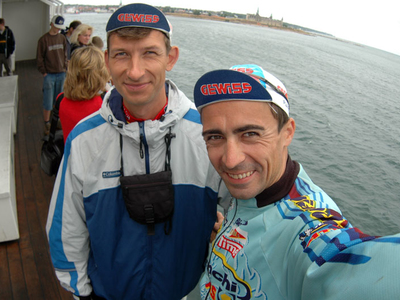 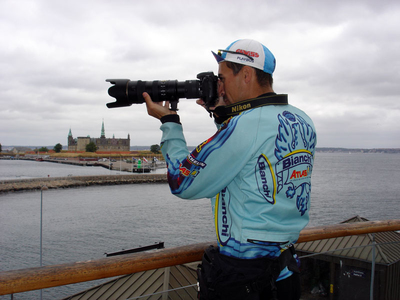 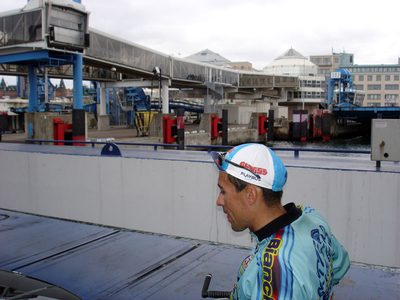 But the journey is beckoning us once again with its yet unexplored kilometers.
Polaraxis half an hour in the sleepy town, drove to the ferry dock.
First I mixed up the terminal and taxied to HH-Feries is Scandlines in which we had bought a return ticket.
Then waited near the pier for 10 minutes watching as the metal bowlmoving on from the Swedish side gradually growing in size, how exactly is approaching the right place, the nose rises like a ramp and without the hustle and bustle leave the car and people go through the side accordion transition.

The ferry experienced a image posted by their horses near the ramp and climbed to the upper deck.
The weather was cloudy, but without rain and you can completely enjoy the view of the city and the Strait.

Region eresund ( a region of South-West Sweden and the Danish capital Copenhagen) - took third place in the ranking of the most attractive investment regions of Europe and the first among regions of Scandinavia.
The region was established as a result of opening direct communication between the surroundings of Copenhagen and the southern part of Sweden. The region's population – approximately 3.5 million people, of whom 2,4 million live in Denmark and 1.1 million in Sweden.
Agreement for avoidance of double taxation concluded by Denmark, Sweden and Norway, provides taxes only once in one country.
The main factor of high competitiveness of Arsunda is a large domestic market and easy access to the market throughout Scandinavia.

Rinat parted, unpacked your case with numerous lenses, and took photography.
I must say that his set of equipment has always attracted attention for what was for me somewhat surprising.
I thought that wealthy Swedes are quite indifferent to such things.
However approached and asked about, clinked by a jealous language, smiling.

Ferry "Aurora" departed on schedule. Twenty minutes of movement to the opposite shore is clearly not enough to enjoy the sea breeze and water space.

Barely having time to click a couple of times approaching Helsingborg we had already run down to the bikes.
After all, when unloading one of us will not wait.

It was the morning of Sunday the already crowded the city looked absolutely deserted.
The following a couple of hours we have devoted ourselves its streets, buildings and parks.
Swept through the old town, reached the tower, Kärnan , a symbol of the city (its height is 36 meters)
Upstairs viewing platform but the entrance was paid and we have not got. 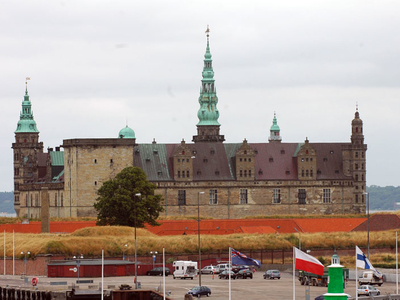 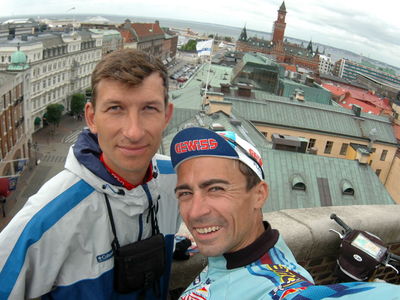 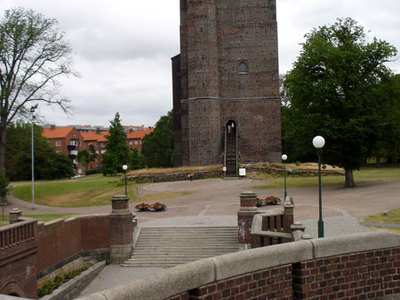 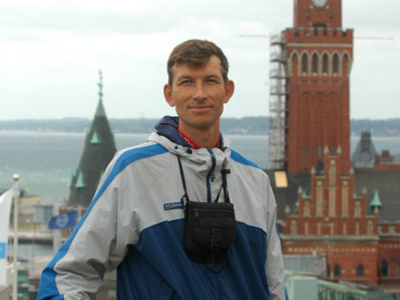 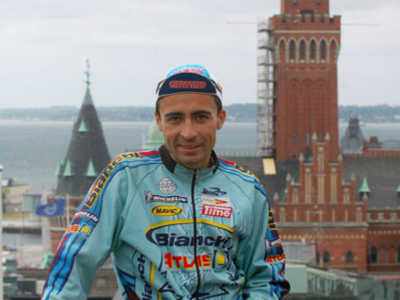 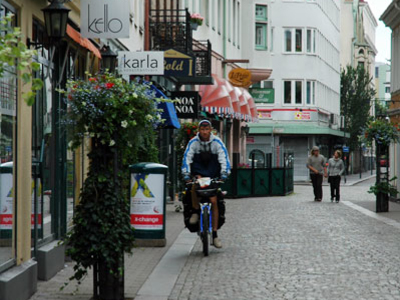 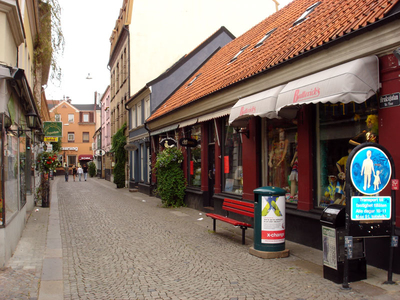 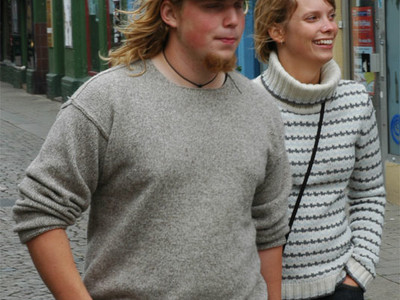 From the Park near the tower and so had a lovely view of the city and eresund Strait.
And we could easily cast his farewell look.
In the distance they could see a town hall - a beautiful building of red brick.

Helsingborg is a beautiful city.
What is strict and elegant at the same time.
Reminds immaculately dressed unflappable gentlemen in ironed coat couture.
The city perfectly reflects the melancholic nature of the Swedes.
Their sluggish condition of the spleen in which they apparently fall whenever they leave barefoot childhood, under the impression of a mischievous naughty Pippi Longstocking.
Street freckled girl from the famous fairy tale by Astrid Lindgren to the great satisfaction of the children constantly disturbs the peace and quiet life of the inhabitants, will budorazhit and animates the world.
But it will take some time and Pippi obviously, too, will turn into a stiff strict Swedish lady and join the ranks of reasonable , honest and hardworking, but boring for adults.

The shops were all closed and we with a clear conscience went out of the city along the coast to the West. Through small towns Hittarp and Viken.
In Vikene bought a liter of 95 octane gasoline burner for 11.8 kroons (~ 40$)
Here at the gas station the toilet was cleaned up using hot water and even map free took.
Oh how I love cyclists here...

As the movement of the clouds became fewer and the sun came out. The mood improved dramatically and Hoganas (Hoganas) we made a halt.

A small Peninsula terminating in a pier and along it there are wooden tables.
Booth with food.NYM and restaurant with a few people.
We broke down and bought ice cream, settled down at a table and enjoyed the warmth and magnificent sea views.

After the Hoganas our Cycling life with a light hand irrepressible Rinat joined the shops with ANTIK affectionate name.
Judging by the title this is the antique trade.
In the big cities is a lot of Antiques or of modern antique crafts at great prices.
But here in the Outback we came across a very different kind - in the long run selling Second Hand - any junk and household items.
Like for example goodwill.
Apartment for sale at bargain prices that it was wrong in the household.
Old toys and books, furniture and kitchenware, costumes and shoes.

It was a real Klondike for Rinat.
He was ready to disappear there for hours, looking for items of Swedish folk art.
At first I brokers nose and thought that this is not the case to delve into someone else's old junk, but then feel it too.
These shops like they dipped us in everyday Sweden the past years and acquainted with her life better than any Museum.

Antik after the Hoganas was the first such kind of institution we encountered on the way.
On the West coast they had a lot.
Apparently life here is the poorer, and people prefer to sell what their Eastern fellow citizens just throw away.

A small little white house with a blue porch and a sign in the window.
Next to the swing bench on chains.
Rinat went inside, and I decided to bask in the sun and swaying half asleep on the swings about half an hour.
Then I got tired - went to rescue a friend and is also stuck inside.
Rinat already picked myself some statuettes of wood and bronze figurines.
I also could not resist and bought a little doll of a girl in a national dress for 5 kronor
And then my eyes fell on the grotesque image of the Danish guards.
He with his big ears, than the C maxival at me.
Smiling woman saleswoman probably also noticed this and refused to take money for it. Prezent!

In front of the city Mall (Molle) we turned off the highway on a gorgeous and straight as an arrow dirt track several kilometers long.
Judging from the occurring running and walking people - a popular place for sports. 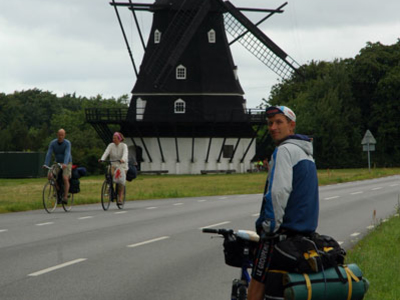 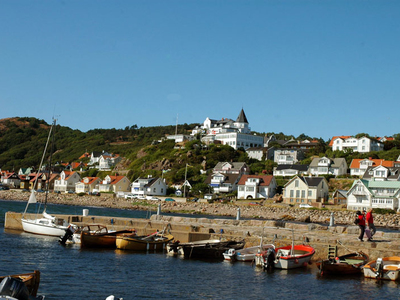 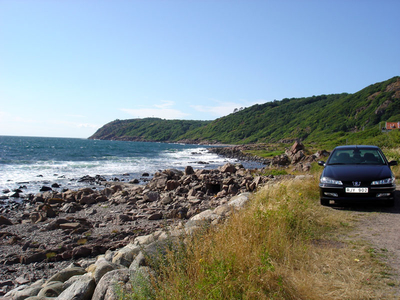 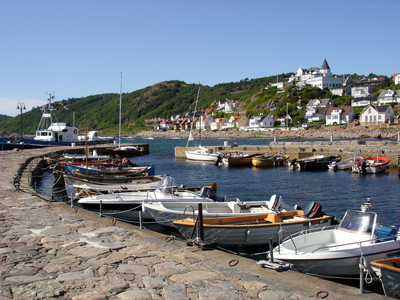 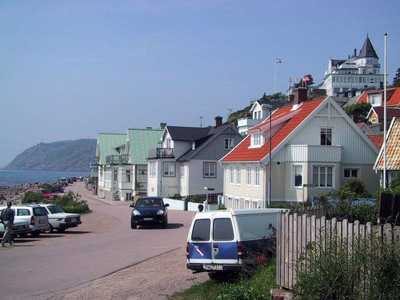 The Mall was stunningly beautiful seaside city gleaming white houses and red tiled roofs.
From the pier it looked like some sort of toy,like enlarged children's designer.
Swedish is a popular resort and place for recreation - yachting, diving and other pleasures of life. And the resort is first class - the pleasure is there to chill, not them cheap.

One view of the majestic Grand Hotel (built in 1909) is located in the city centre on a hill and offering exclusive services to guests, makes sigh and wistfully counted pennies of your own pocket.

We are your hotel always carried with him. And believe me it is not worse than luxury apartments. It's all about the habit.

On the waterfront at the small market was selling fresh fish , fruits and essential fragrant strawberries.
The Mall is located on a headland Cullen(Kullen) near the entrance to the reserve in which we actually kept way.
◄ Prev
Next ►