The earth is so huge, and so many houses!
Large and small.
The beautiful and the ugly.
Buildings and razvalyushki.
And there is still quite a tiny house of Karlsson on the roof.
Carlson is confident that the world's best house and living in it the best in the world Carlson.
Little also sure.
As for the Kid, he lives in a very ordinary house on the most ordinary street in an ordinary town.

When we were again in Sweden, I embraced the feeling of coming home.
In Norway, I kind of felt like just a visitor.
And here at once eased the tension of the previous days and I did not wish to hurry.

The next morning we were in no hurry.
Gathered , ate , made a half-hour foray into the bushes with raspberries. got the leftovers.
I think after us is not something that people - animals had nothing to eat.
The weather in the morning whispered. It was warm and the sun was out. Now they had to rejoice in this fact.
Waddling to the dinner got to the lovely city of Arvika(Arvika) , where he hung out for about two hours. 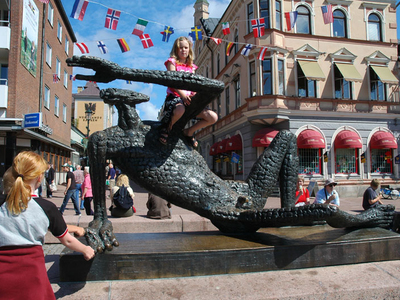 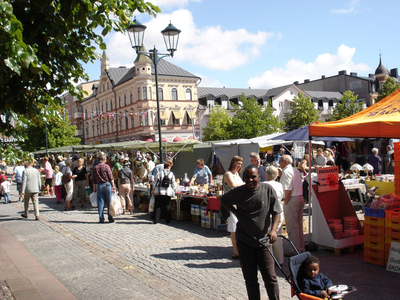 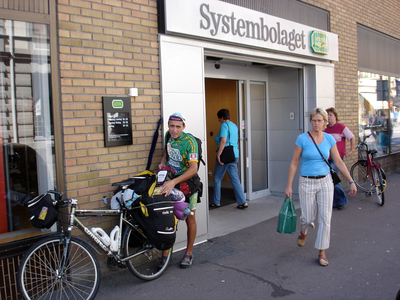 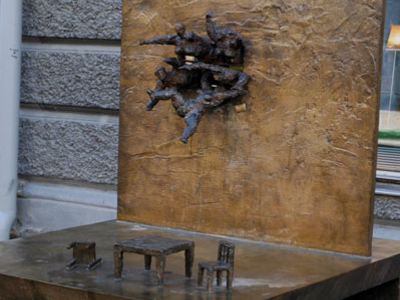 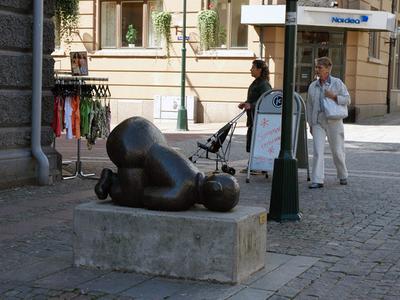 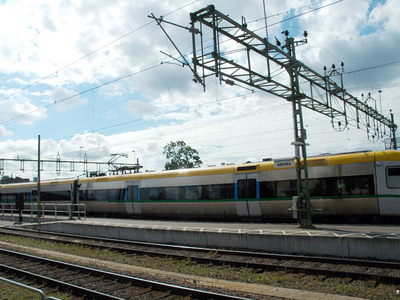 Arvika is located on the Bay Kyrkviken - part of the fjord Glafsfjorden.
This so-called inner fjord - a remnant of the ice age. When this region was close to the sea, then dry land rose and the fjord remained until our days.
Through a system of channels it is connected to lake Vänern - the largest lake of Sweden.
On the one hand good water infrastructure connects to Arvika with Gothenburg and Stockholm across the lake and the Gota canal .
On the other hand it was in 2000 almost a disaster for residents.
Then in this part of Sweden there was the strongest for the last hundred years flood.
It was caused by the fact that the water level in the largest lake of Sweden, Vänern, rose to three meters higher than usual because of the rains.
In the result, the hardest hit town of Arvika.
Authority of the city of Arvika were even forced to evacuate children and elderly residents because the water left some of the city's parks and streets.
On the West coast of the country has closed the railway and the motorway.

The area around is hilly and the city is like several levels.
The water is a railroad. And the city begins with the station.
A huge area behind him, cluttered with kiosks and stalls.
Here fresh bread, fruits and vegetables. As always, a lot of fish.
There are Rinatom favorite flea market.

Then we split up and hooking the bike to a lamppost, went for a walk on your own.
The wine we already had and we risked nothing.

And I almost immediately came upon the monument standing, or rather lying at the edge of the area.
Painfully, he looked a bit like my companion Rinat.
I walked around peacenepal - well, he, the spitting image.
However the question is why it did not appreciate this fact later.

Like all other shopping and markets, this also ended buying ice cream, which we ate sitting on a bench.
Along the way, came to the opinion that it would be nice to still try South African wine.
It was - found local Systembolaget and bought three quarts exactly the same as was stolen from us in göteborg.

And on the street, meanwhile, was getting dark. From the West approaching black cloud.
But how many can get wet and it was decided to wait out the rain in a gated pomeshenie.
This room was the cellar with the Internet.
Rinat've been kicking our heels on this issue - I was eager to check his mail, but to write something in response. So the opportunity presented itself.
In General theoluce we performed the rite pogrugenie in the bowels of computer networks and coming to the surface found that the shower was over.
Just need to wipe down the wet seat of a bike and move to the South.

The road to Karlstad unfortunately had one and it was the highway.
Great fun you know, to no avail.
In addition, the weather that day was striped.
The clouds rolled in, one after the other and poured all around mercilessly.
But we got used to it.
We decided not to compete with them in speed as before Gothenburg, and tried to go in between.
When the next cloud we were catching up, we quickly turned to the forest and under some sort of widely ramified tree chewing bread with milk. And was silent. As the weather is not very contributed to the discussions, Yes, we're a little tired apparently

However, trees, unlike deciduous trees, much less pass the water from the skies and namedvalues to keep the clothes.
Then we waited half an hour to dry the road so that passing cars didn't hit us with a shower of spray from head to toe.
Although the roads here are clean - still unpleasant.

Until the evening we repeated a similar trick five times and our clothes were surprisingly dry.
When it seemed that we still had deceived the heavens at the entrance to Karlstad we are still covered.
And hide was absolutely nowhere. On the edge of the highway was a fence made of mesh netting.

Fortunately there had a place to vzveshivaniya machines with scales.
There was some sort of booth with an awning on the perimeter, where we took refuge for a time.
At the same time wrote on the back of this structure.
But then found quite a civilized the door to the toilet, but it was too late.
Good idea as always came afterward.

Karlstad is located on the shore of lake Vänern.
We again drove up to him, only this time from the North.
The examination of another city Carla was postponed to the next day.
And we turned in the direction of the campsite indicated on the map.

In Sweden, there are about 750 campsites.
On the roads and the maps they are marked with a blue and white icon with a picture of a tent.
Campsites in Sweden are rated from one to three stars depending on their equipment.
Camping can be a restaurant, a snack bar, Laundry, sauna, mini Golf, tennis court, TV, boat hire, canoes, bicycles.
The cost is from 90 to 165 CZK(300 - 600 rubles) per night.
The directory of campsites are issued annually; the publication can be found in the Information service Stockholm or at newsstands Sweden.
Many campgrounds offer discounts if you arrive after 21.00 and leave the campsite before 9: 00 on the next day.
(if you consider that the reception is closed just at this time, it is not clear when and to whom to pay).
Campsites in Sweden are the cheapest in Western Europe. 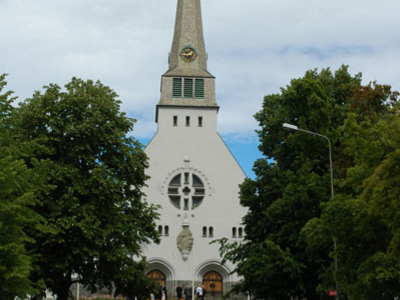 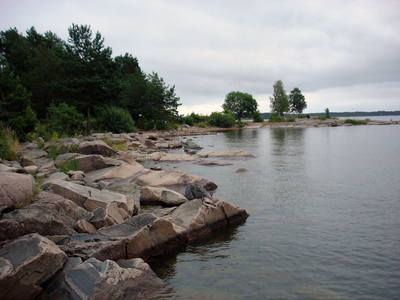 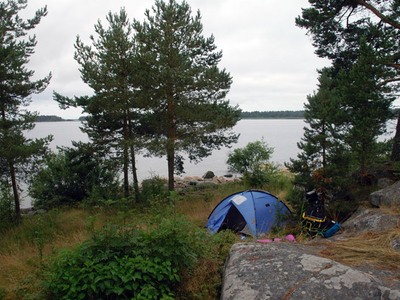 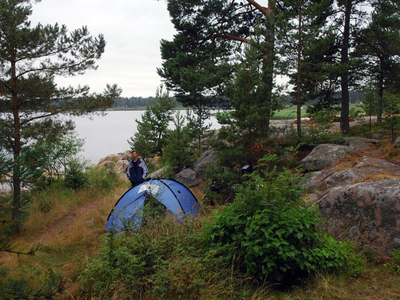 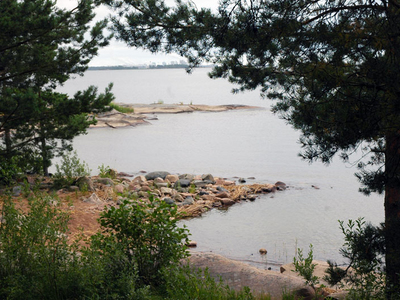 Camping near Karlstad was the biggest sizes of all previously seen with a marvelous Park, broken on the shore.
That's where we rushed in search of a better life.
Drive almost to the end of the Park, found a more or less secluded place for a tent and when it got dark and the people walking have ceased to frighten us with their shrieks in the bushes, set it.
Place what to say it was very picturesque. With the lake as the wind was blowing from the sea.
But we still have a potluck dinner on the rocks of a small beach.

It was pretty cool, but the locals vengeance bathed in the night in the lake.
And naked
Their white bodies a thorn shone through the darkness of the night .

Lake Vänern was quietly lapping on the rocks and whispered to us like a lullaby.