Chapter in which Carlson cleans the body and suffocates insects, and Baby thinks about the nature of existence

"Sorry," he said, ' forgive me for what I am, so nice, helpful and clean person, just want to make it better.
Forgive me for this...
It seemed that he was going to cry.
But I try in vain, ' said Carlson, and his voice trembled.
- I never hear words of gratitude... some just reproaches...

Got up early because he was on site and even theoretically to run is not wanted.
But there is no one would come - it's all about confidence and consciousness of people.
But we have a different mentality and nature is waiting for some reprimand or ban.
It is difficult to fight.
We of course by the end of the campaign of course a little arrogant in this respect, but still probably not until the end.
Especially me. Rinat was more relaxed.
That was demonstrated this morning when we gathered and left from the Park.

Before we entered the territory, as it turned out the back door.
Now standing at the main beheld a sign prohibiting Cycling in the territory.
Such signs right rarity for Sweden.
To hang need a very good reason.
And we are the fools vengeance was prowling through the alleys and was surprised that it all staring at us and yelling the usual "Hey".
But taking off the head on hair do not cry.
Starting to break the Swedish rules of conduct, we could not stop.

Rinat unbearably wanted to take a shower in the morning.
Cheap cabins at this campsite, as elsewhere, were opened by the magnetic key provided to each guest.
We took a wait at the door.
And when it opened from the inside, Rinat, muttered "Sorry", he pushed past the dazed man, who was outside,before the door shave olepolos.
Showered there for fun, and then we switched.
When I was lathering the neck I had a sharp feeling of guilt in front of the Directorate of the campsite.
The terrible gnawing of conscience, the last remains of which flowed together with soapy water and emerged feeling cleaner body.

Now it was time to explore the city Karlstad.
Before the town was a group of supermarkets.
A huge conglomerate of stores in different products ranging from construction materials and ending with a children's toy.
We could not go in the sport.
Wandered there, mooblisalong and went back home. 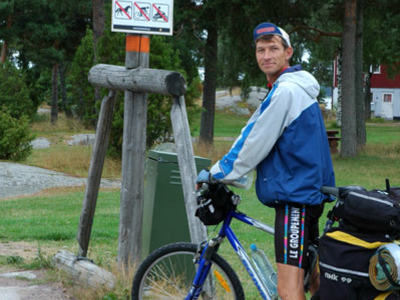 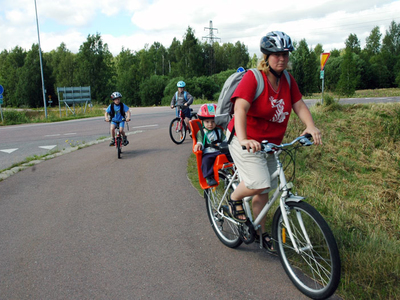 Karlstad is built on the Delta of the river Klarälven (Klarelven) on the North shore of the largest lake in Sweden - Vänern.
As a result, the city scattered on Islands and Islands of this Delta.
Numerous bridges connect them together .

It is the second largest port on the lake in the country after västerås (Vasteras).
Karlstad was severely burnt four times. After the last fire on 2 July 1865, was only a Church and a few buildings.
Later the city was reconstructed according to old drawings and photos.
Karlstad is considered to be one of the 5 cities with a large number of Sunny days in Sweden.

With pleasure traveled through its quiet streets and stopped at a small island converted into a Park.
The island surrounds the track on which run the sports people.
We settled on a bench and had lunch.
Ate one runner passed by us a dozen times.
The sun was so worn out that even I began to nod.
With the ducts of the river pulled the coolness and smell of freshness.
Inevitably appeared an unworthy feeling of envy - what a life!
In silence and serenity, in harmony with nature. 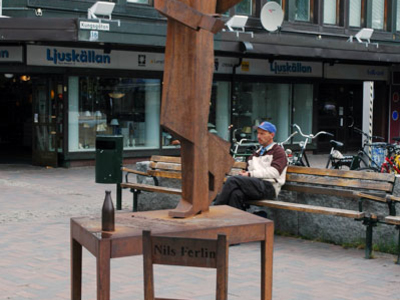 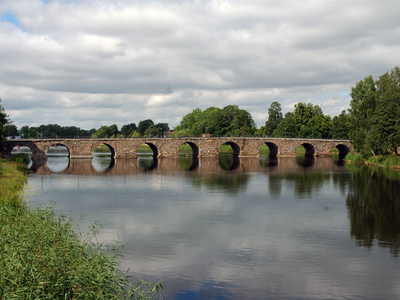 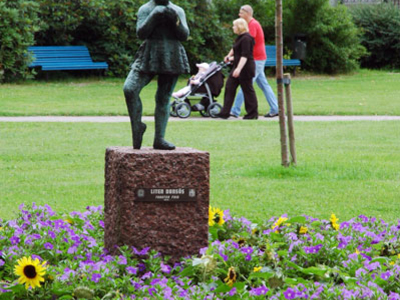 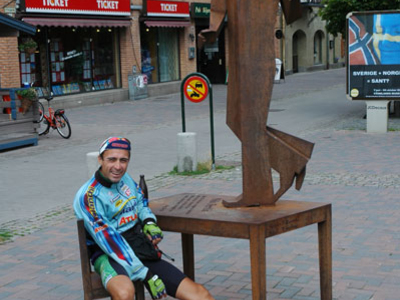 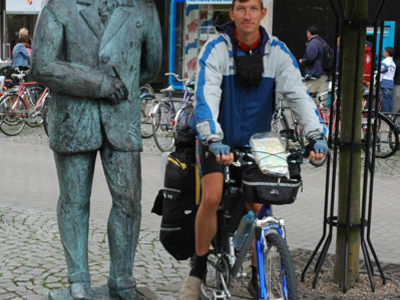 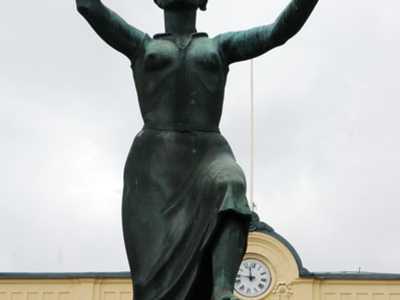 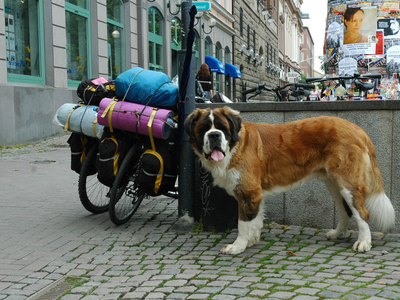 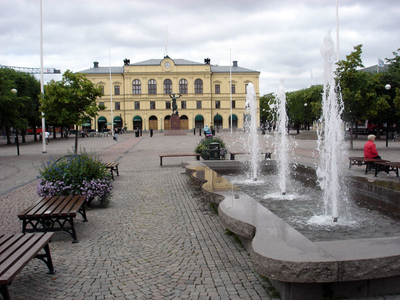 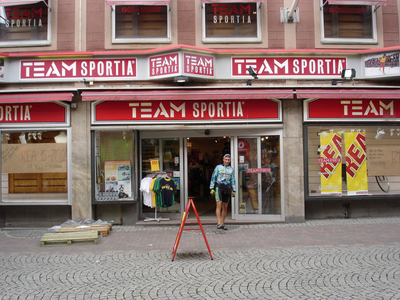 And we have...
The phenol in the river poured, the sewer will get there and half the town is sick with dysentery. /> Products with the hepatitis b poison.
On the streets stink of exhaust fumes of thousands of cars and in the rain impassable gryazyuka.
Hundreds of cops robbing motorists on the roads, and those, in turn, honored for valor violations of traffic rules and have no respect for neither pedestrians nor cyclists.

10 thousand in length state,
Wide and about miles thousand 3.
Here one only need medicine -
The network of highways and Railways.
This review is neither stale nor sharp.
Well, who of us is not known
What is clear as day for all.
All Russia - the empty space.
All of Russia - only the wind and snow.
Not a country but a solid bivouac.
For some - a gold mine,
For others the darkness.

But enough lyrical digressions.
It is not all hopeless really

After Scatterer(Skattkarr) had to make a detour because the road appeared the sign of the highway.
But we are not too sorry about this. Despite the splendor of the Swedish roads to go along with the machines is not very nice.
Good to get used quickly and if on the road a few cars, it seemed that so much.

You say something nice about E18.

Smooth asphalt, relatively narrow, sometimes on the right side behind the restrictive line no inch of the curb.
We had to go or on the road with cars, or restrictive white stripe like the balancer is on a thin rope.
Go, but my head is swarming all thoughts about the world and society exactly on the Head Lou.
For these noble cause we got lo Kristinehamn.

Kristinehamn is situated also on the banks of lake Vänern.
To be precise, it is situated where the small rivers Varnan and the River Lotстекают in the lake.
Kristinehamn received this name in 1642, in honour of Queen Christina of Sweden .
The city has a harbour.
The main attraction is the sculpture of Picasso on the beach.
We haven't seen personally, because the city to linger and went straight to the check-out.

Then I decided to turn off the road - she was too tired to look for the night somewhere on the shore of the lake.
After two hours of driving on a rural idyll reached the level of the lake Alkvettern (Alkvettern) 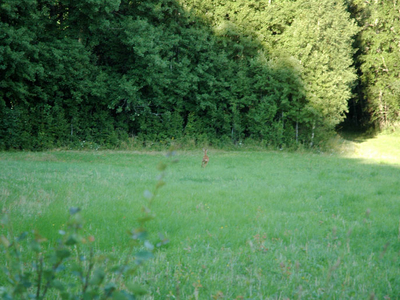 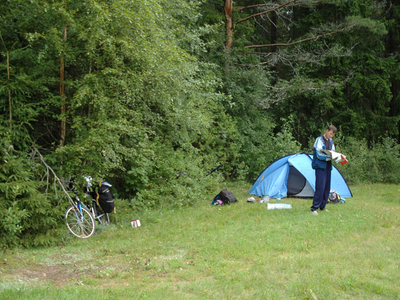 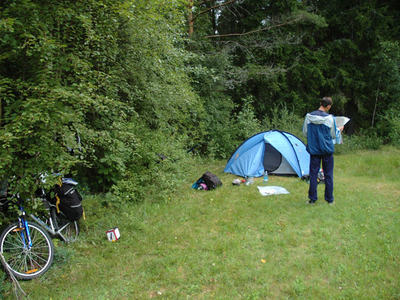 As usual, the whole shore was occupied houses.
But here, as it is especially.
Failed to find even a small piece of no man's land near the village of Milliken (Mjorviken).

Had to get to the Parking lot in a forest glade.
The location was very good if you don't count the numerous living creatures running and crawling around.
And if the rabbits and deer of trouble we don't deliver -they timidly stuck their faces out of the bushes and went back into the thicket, ants is another matter.

Here the perimeter of the clearing in the forest were a great many large ant hills.
The insects were quite large and biting.
I suffered from them quite a bit and only rarely shake off.
But Rinat couldn't just stand in one place.
His pheromones attracted all the nearby nests.
Perhaps they are in the chain passed on the information and the discordant ranks were drawn to the body of my friend.

The result had a change of disposition, otherwise the ants would have brought Rinat psychotic.
Finally we were able to sit, eat and go to sleep.