A short road in the dunes

- Calmness, only calmness! Carlson said and pressed a button on his belly.
The motor buzzed, but, well, all stood still and waited until the propeller will spin at full power. But Carlson was off the floor and did a few laps.
Motor something is broken.
It will be necessary to fly to the workshop, it was oiled. Of course, I myself could do, Yes, trouble, no time... Think I will look into the workshop.
The kid also thought it would be more reasonable.

The morning was Sunny. The place is absolutely unreal and idyllic.
These low pine-trees almost to the sea rises.
Sand dunes as far the eye.
In the distance the silhouette of the headland Cullen in a light haze.

All the clouds were far around it, not daring to approach the rugged mountain peak.
As a result the sky for many miles around was cloudless as the place where we spent the night.
After all, we didn't get very far in the long run.
Felt so good and lonely that I was seriously thinking to hang out here on the sand that day and to warm our old bones after a cold Danish.
Reason prevailed.

A day's rest it is better to arrange on a bad day when it's cold and rainy and to go there is no desire and possibility.

However, we had a little sunbathe and Ecopolis in the cool waters of the Kattegat sea.
The water was on this side of Sweden is much more crisp than that of Stockholm.

When we Rinat enjoyed sunbathing for an hour, the first people.
Well, of course with the dogs. The Swedes like the beaches in the main or run or walk their dogs.
Something like that after these thoughts, I felt awkward.
It was necessary to gather.

After taxiing out from the forest glade to the track, drove to Ängelholm(Angelholm) - the first more or less large city on the West coast and on our way.

We slipped past without stopping and two hours later went to the coast of the Bay of Laholm's (Laholmsbukten) in the area of unpronounceable Someclassname (Skummeslovsstrand). 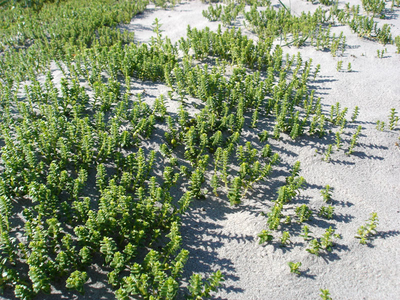 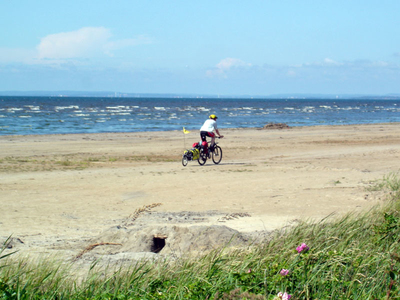 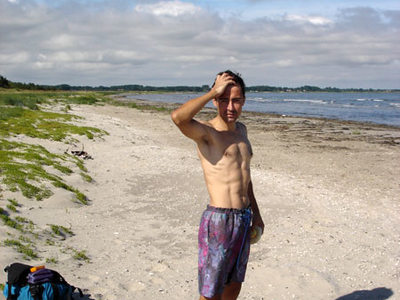 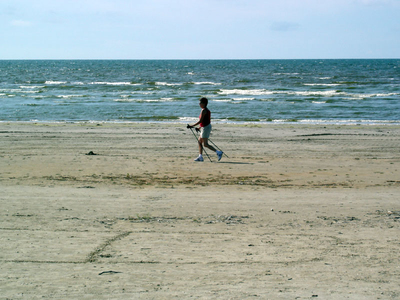 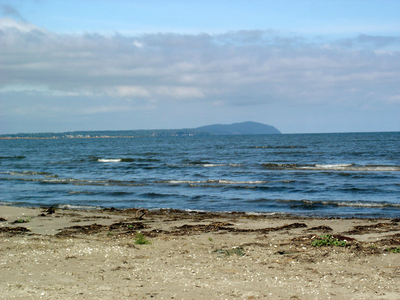 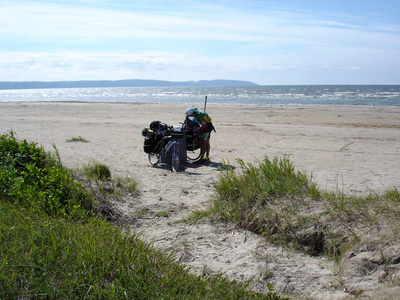 From Båstad to Mellbystrand is a solid beach.
But unlike our previous overnight the sand was here some other consistency or for some other reason, he was a well-Packed dense layer.

Perhaps he's just constantly soaked with sea spray and the wind cemented it.
The car did not have to drive at least along the edge of the water.
Here rested a lot of people despite the serious wind.
Which spoiled the whole raspberries warm from the sun.
Tan could only hide from his omnipresent blow.
People used the dunes, hiding there, or was just blocking cars.
Hovered in the air bent parachutes and kites is a favourite amusement on this side of Sweden.

We found a free bench and decided to eat.
Had to do it quickly , because unlike tempered Swedes breath of the Atlantic quickly weathered of us remains stocked during the drive heat. 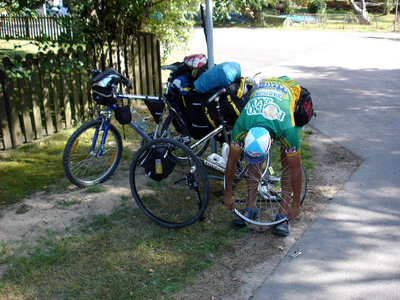 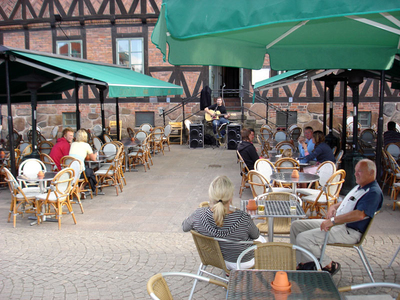 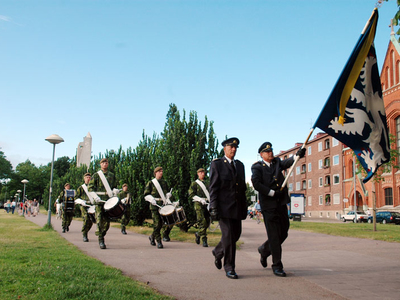 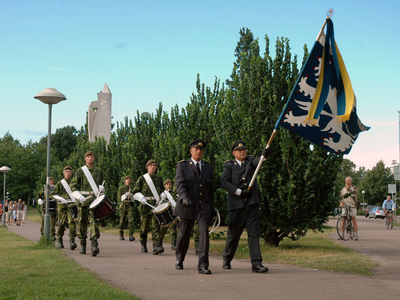 We drove along the sea several kilometers until the end of the beach.
There in the sea, became a small river Lagan and in her mouth was some kind of reserve.
We had to go around it following the signs to bike lanes.

About Laxvik (Laxvik) Rinat made his first puncture your wheels.
More precisely, even not a puncture, and as it turned out, upon inspection of the camera a little away nepela nipple and bleed the air.
I really thought Rinat as something will cost without breakdowns in a country with such roads.
But the hopes did not come true and this was the beginning of a coming series of stops for technical reasons.

I helped Rinat handle the repair, fortunately there was nothing complicated.
But whether something more serious - I would have entirely to do this.
Rinat fundamentally eschewed learning materiel ,believing that the functions of cook and photographer with him is more than enough.

The weather was changing with kaleidoscopic rapidity.
The clouds then rolled in and it was raining, then again gave way to the sun. 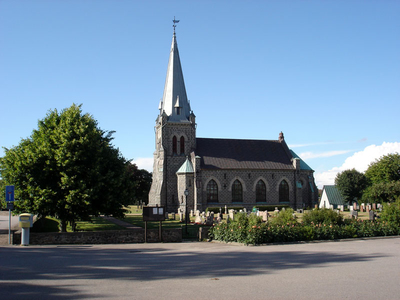 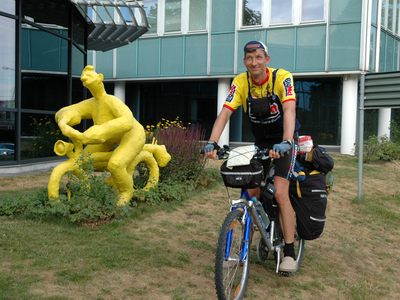 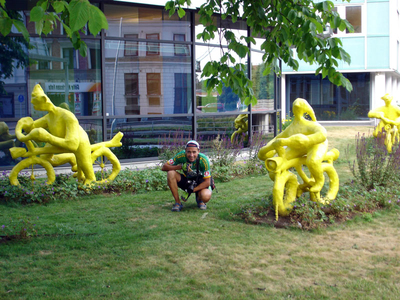 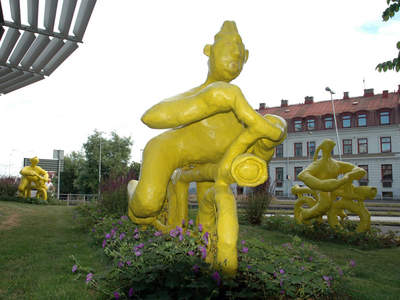 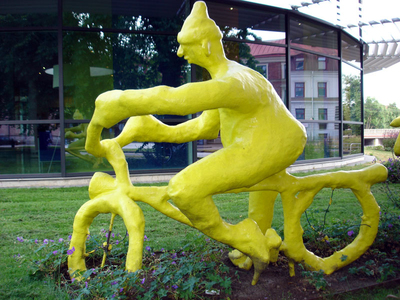 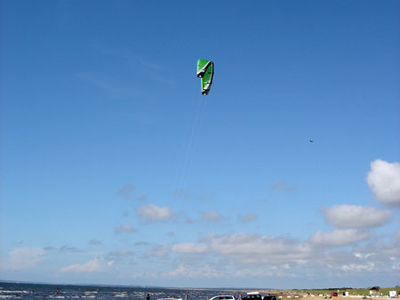 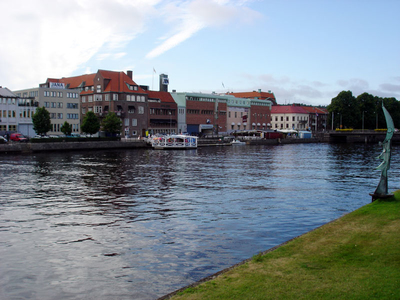 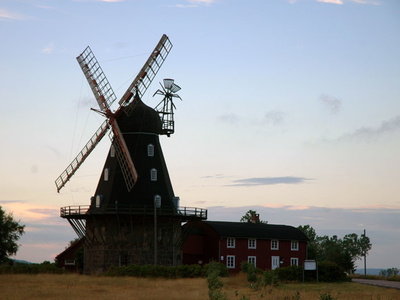 In Halmstad (Halmstad) arrived late in the afternoon.
The city was wet after the rain, and the streets gleamed as if washed by the diligent hostess.

Age of Halmstad dates back to the 1000-1100 years
First, the city was located on the coast, in the town known as Ovraby.
Then the settlement was moved closer to the shoreline.
The city is constantly destroyed in wars and rebuilt again.
Engelbrekt Swedish commander and his troops burned the city in 1430м
The city was also besieged in the beginning of the Seven years ' war in 1563.
In addition, the city was burned to the ground in 1619 - survived only stone buildings and churches.

Now this is a cozy town with no special attractions.
Although there is a lie.
We saw sculptures of cyclists made in the original manner.
Like petrified clay men with caricatured appearance.
All the same, how to love a bike to put monuments to him.

We hung around for an hour through the city, visited the main square and listened to restaurant musicians.
Stuck right in the Wake of some military procession, consisting of two veterans with the flag and escort fighters drummers.
They briskly in silence Stoke the streets to the sounds of the March.

You had to buy something for dinner.
And local Hemkopf helped us in this.
Piece of thick cheese, another ham , bread, and chocolate - the ingredients for the upcoming feast! 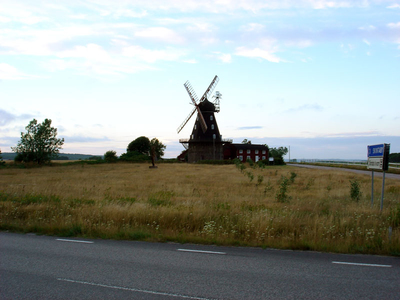 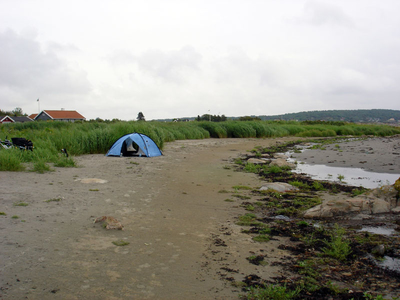 Again started raining and we hurried on.
For the night wanted to get up again off the coast.
I'm always in such cases, focused on the icons of the beaches on the map.
Usually the beach is a public area and no one predaval us claims.

Drove Timesand (Tylosand) and Villeret (Villshared) but the place and did not pass.
The shore was densely built up, and in addition overgrown with thick grass.
In addition, the track was pretty far from the sea and it was difficult to assess the real situation.
Finally after Coverdale (Haverdal) we decided to move to the shore.

The same picture - everywhere private houses and high sedge, hiding from the eyes of the water.
To come back and go in search of the next is not wanted.
We found a well-trodden passage in the thickets of grass and rushed in.
It is very interesting to go inside a natural wall when the stalks are tough tickling your face and body on the sides, and ahead you see a small snake trails.

But the grass thinned and parted.
And we found ourselves on a superb sandy beach ,which is never seen from outside. Sedge in some places grew so formed as if specially arranged a secluded clearing.
One of which we put up a tent.
It was impossible to see from the houses.
With great relief we settled down to rest.