Cycling / The new adventures of the Kid and Carlson / Norwegian breakthrough

Chapter in which Carlson presses the milk in their own backpack, and the Baby is getting wet in the toe area

If I just barely wet my feet, well, just a little, and she's already nagging and bothering me, so I changed socks - persuaded the Kid Carlson.
Carlson nodded:
- Do you that my grandmother does not require that all the time I changed socks?
Did you know that as soon as I approach the puddle, my grandmother running towards me with all haste through the village and grumbles and mutters the same thing:
"Change your socks, Karlsonchik change your socks..."
Don't believe me?

Even before we discussed the way forward.
We had a week and a half. And after a brief hesitation, decided to go to Norway.
It wasn't planned in advance, but we decided we'd make it.
View the North of the country very much.

I woke up early.
Magnus Natasha fed us Breakfast and we zasobiralsya the road.
The day is not very much. The morning was again overcast and cold.

First riding ancient bicycles, standing on one of the streets of the city.
But to go on them would be extremely uncomfortable.
I'm not talking about the fact that to climb and climb, they need the platform according to the type of train - they are a bit too high even for my long legs.
So I had to return to the previously tested vehicles.

Said goodbye cordially, and went into the country of trolls.
On the map I plotted the shortest route to the border with Norway.

The day was filled with continuous pedaling in the absolute middle of nowhere.
We drove through the backwoods of Sweden, far from major cities and places with attractions.
Even as it is not a complete absence of human life.
The further away from the Centre of the company.that feeling was intensified.

It was very chilly , the wind picked up and the rain started.
for Hagstrom (Hogsater) decided to have a snack and a little rest in a roadside copse.

The food during transport, we have distributed about equally, depending on the availability of space.
I got the bread and meat.
Rinat reached for a carton of milk. And then it turned out that the milk we especially like to indulge in not have to.
Half flowed into the bowels of inetovskogo backpack.
Drank what was left, and the lack was made up with water.

Again, smooth road under our wheels, and passing by sparse woods and vast fields.
And small villages alternate with each other.
Legal (Lerdal), Of Hester (Gesater), Oftedal (Toftedal). 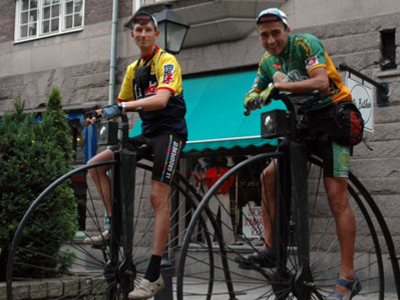 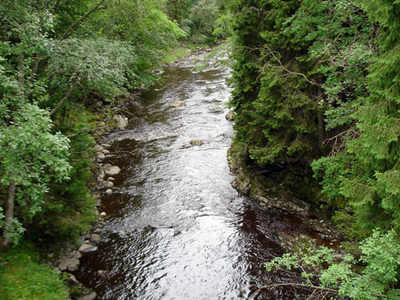 When driving up to the border was raining.
We stopped to put plastic bags on his feet.
As shown by further practice, this method warms the feet, but not able to protect against a significant flow of water.
And for those who are going to go to rainy Scandinavia needs to think carefully about their ammunition.
To go with damp feet very unpleasant.

The Norwegian border was a bridge over a small lake and was marked by only a sign.
How magic has changed the terrain.
Became more mountainous.
Like the Swedes made the demarcation line, leaving himself the plain, and the Norwegians mountains and rocks something worse.
But who knows maybe it was.
Still struck by the yellow road marking machine and yellow road signs against blue in Sweden.
The rain abated and we drove in relative peace until Prestebakke (Prestebakka)
Here the road was razvivalas. To the left was the main road, and right is secondary.
Then I made a blunder!
Never get fooled if on the map it seems that this road will be shorter.
I decided to shorten the route, and severely mistaken. Yes it is shorter by mileage, but passed on the hills and we had to sweat on the rollercoaster.
However, we only sweated at first, and then livanul rain this sweat is completely washed away before it arrives.
The water started to squish in his shoes dripping in the face and dripped over the collar.

At nine o'clock we moved to the Norwegian city of Helden (Halden).
The city is located on hills in the Delta of the river teesta (Tista).
On the left side of the road has opened to us a panorama of Iddefjord(Iddefjord).
We were shivering and wet and it kind of clouded the perception of the majestic beauty that opens our eyes.

On the way to the city, I could not help but capture pulp and paper mill shrouded in white vapor.
Photo does not convey a terrifying picture of the industrial inclusions in the pristine surrounding nature.

Somewhere near one of the two Norwegian research reactors.
In spite of such objects, Helden has been recognized as one of the cleanest cities in Norway in 1996, although in the seventies there had to be better than we have in the lake.
But the Norwegians took up the mind and clean all around.

On the top of the hill is the fortress of Fredriksten (photo from municipal website) is the main attraction of the city.
The Fort was the first Outpost of defense during the wars with Sweden.

Helden - the only city mentioned in the national anthem of Norway, with reference to the town's citizens burning their own houses to prevent their capture by the invading Swedes. 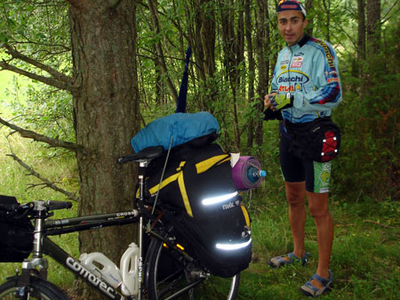 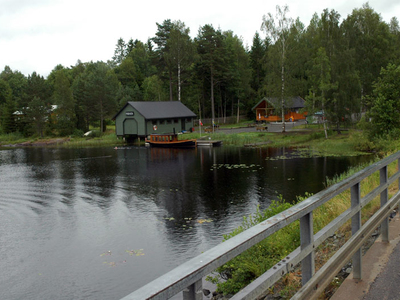 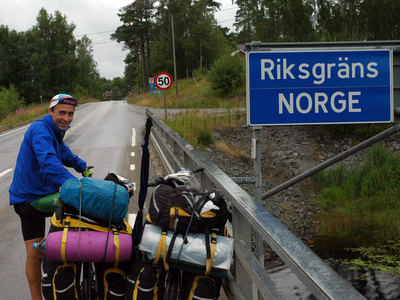 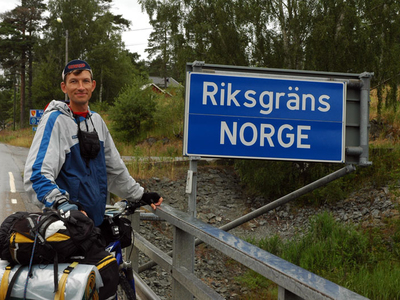 The city is located on the border with Sweden , whose territory on the other side of Iddefjord.
The two countries connect two bridges of Svinesund (Svinesund) - old and new.
Bridges are very popular with Norwegians who regularly travel to Sweden to visit the Swedish cheap shops.
The price of the products in Norway 30% higher than in the neighboring country.
However to cross the new bridge and the Norwegians have to pay a fee.
And the Swedes traveling to Norway, you have to pay duty crossing the border for any bridge.

Well, we entered Novegil, skirting the fjord, and because bridges have not seen.
After the rain the evening Helden was quiet and empty, only in the center some where in the cafe glowed in the window.
I stopped in the square near the monument of a girl with a mountain to change her socks, which were full of water.
Horn the girl was very long, and my socks are very cheese. 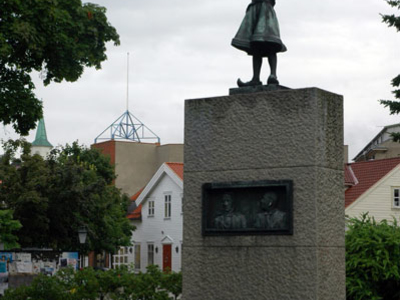 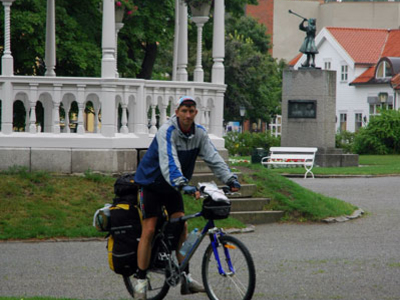 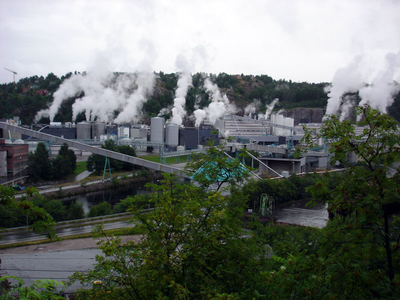 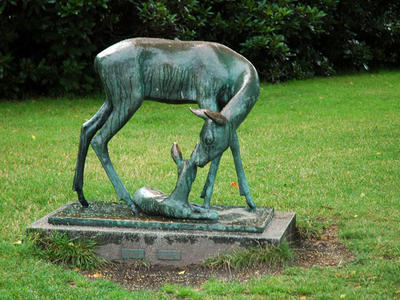 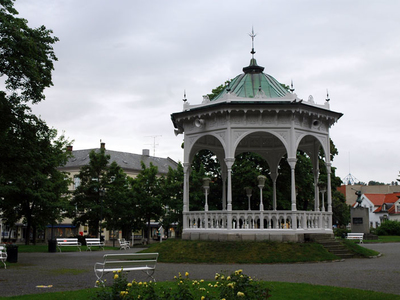 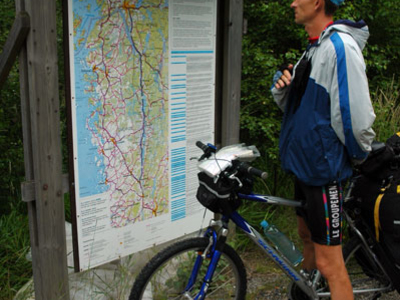 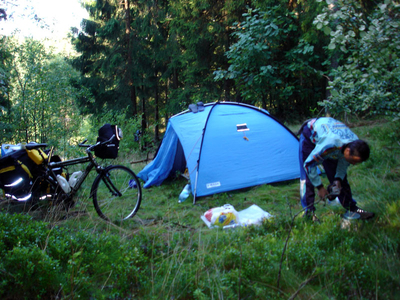 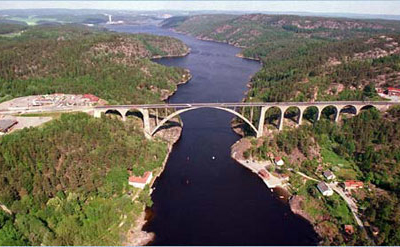 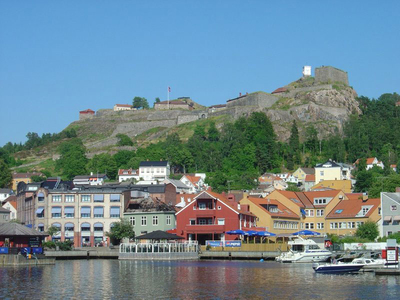 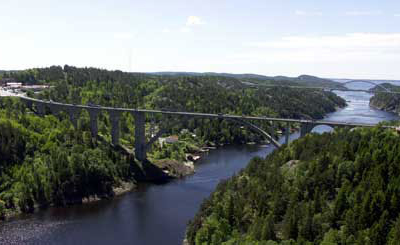 Changed and life began to seem not so bad.

Having ridden a bit in the center, went out of the city.
We were exhausted that day.
But far failed - Rinat punctured tire.
About half an hour and we were busy repairing his bike.
It was getting dark and we are not choosing rode a couple of kilometers and found a small uedinennye the hill, where led a barely noticeable trail.
Near the road was a sign announcing that a nearby compost pit.

The grass was damp and we again got wet while going to more or less flat spots.
Flat it was a stretch.
In addition, around protruding tree roots and strongly attracted putrid smell when the wind blew from the compost pit.
But we were so tired that we didn't care where to sleep and what.
Still have the strength in the darkness to cook food and eat it.

Rinat as I put up the tent brought in a travel diary the next wrenching record:
"Tired as a dog. Sleeping on the rocks had never.
The passage of the extreme trails in these places more interesting with sponsorship. ...."
and then he seemed to be quite out of place
"Receiving the ice baths in the local rivers and lakes has a purely practical sense.
Personal hygiene and the ability somehow ponyprogatsya other muscles to relax in turn, the spine and mind"

After taking rice cereal with a glass of "the Castilian of the castle," our spines relax themselves.
Oh and about the mind and say nothing.