- Still too early, he said. - First we fun.
I don't agree bored lying in bed. Here, too, there is something to do.
You can eat sandwiches with fatty sausage, you can play the "bag", you can arrange a pillow fight.
We'll start with sandwiches.
- But you recently ate a lot of buns.
- If we lie and miss, I don't play, said Carlson. - Bring sandwiches!

Morning around the compost pit was Sunny.
We immediately hung their wet clothes to dry.

Though the air was still damp and dried up bad.
Because I had to put damp boots over the backpack and the socks to tie the flag around its perimeter.
All dries much better.

To the noxious smell we probably have sniffed and almost not felt.
Our hearty Breakfast, nothing could ruin it.

We waited for Norway.
Now we could fully enjoy her life and to feel - how it is to be a descendant of the Vikings.

The mood was cheerful and we descended the hill which gave us shelter, pressed on the pedals.
Raced past almost silently, the red-white train , as if descended from the pages of a futuristic novel.
If a drop of water smeared on plane speed.

At the entrance to Sarpsborg (Sarpsborg) opened the panorama of the industrial area of the city.
The road passes the dam through the Glomma river (Glomma).
From the observation deck the view is absolutely fantastic.
Gushing, bubbling and foaming streams North of the river, the torque of the turbine.
A bit further on the right side of the river on a steep Bank urban landscape Borregaard chemical Corporation.<br /> This Norwegian company, which arose in 1889
At first main products were traditionally pulp and paper, but later began the production of chemicals based on wood as raw material.
After the takeover in 1980, Borregaard - today, the division Group Orkla. 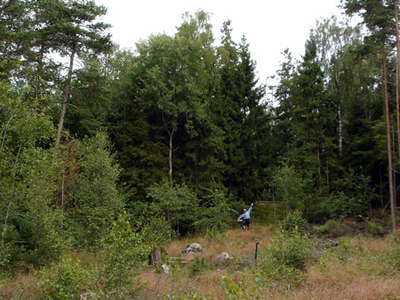 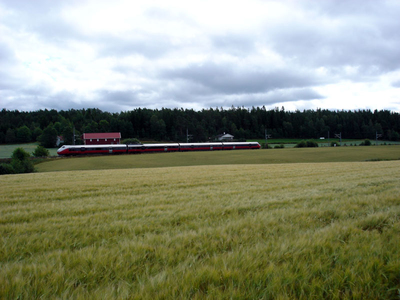 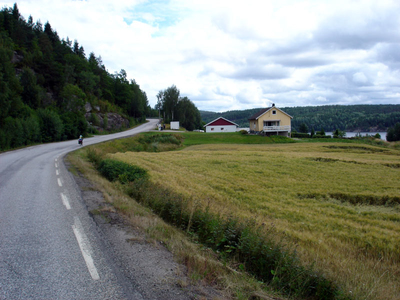 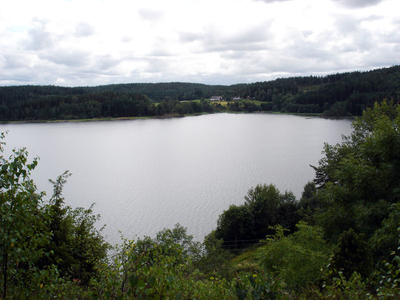 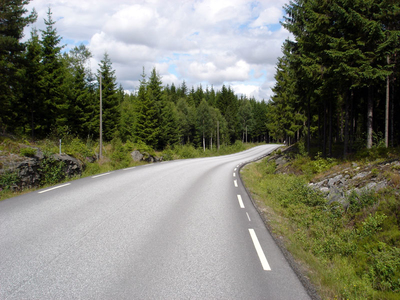 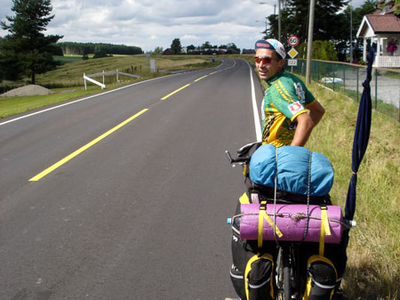 How many were traveling across Sweden - have not seen a single industry or a single pipe.
And then one day for the second plant.
The harsh Norwegian nature, harsh industrial landscapes.

Today was Sunday.
And the city of Sarpsborg was almost deserted by its inhabitants.
They either left or stayed at home.
No shops were not working - even grocery.
It is good that we on the Swedish side, bought a lot of food.
And so if you do not know, you're hungry to ride until Monday.

In the Central square of the city, we finally saw people!
Two stylishly dressed young men in white shirts and black suits.
We have many go - neoreligion preach all sorts of doctrine.
Rinat as they saw so much of it is contorted to see in Ufa, he was persecuted.
However, the guys nothing to sell to us and were not asked could they do to help us.
I slipped the card and asked how to get.
Explained politely and went on his way.

To stay in the city zero and there was no sense turned on the track under the number 114.
We go and suddenly we see a sign hanging - type closed traffic along this route.
Well, I think the plunge is to go back and go the other way - it is such a hook.
Still decided to take a chance and see what there is to come.
Long story short got to the bridge over the tributary to the Glomma - Mingevannet.
Here was opened the reason the bridge was being repaired, or rather its pavement.
But we're not in the car calmly and brazenly by workers with jackhammers drove to the other side.
Do not go back. 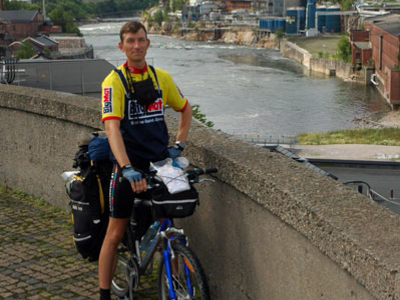 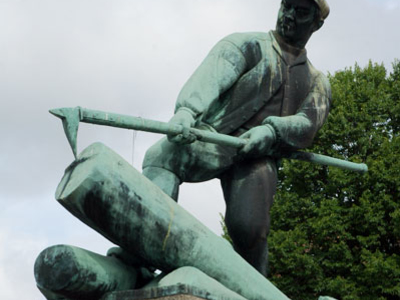 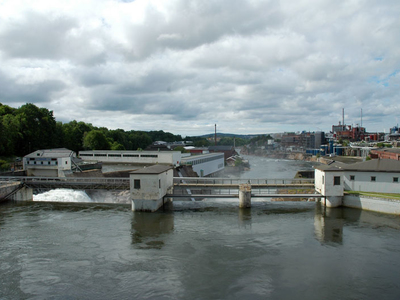 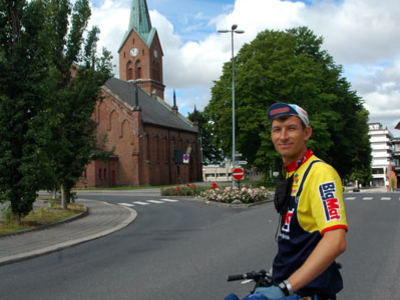 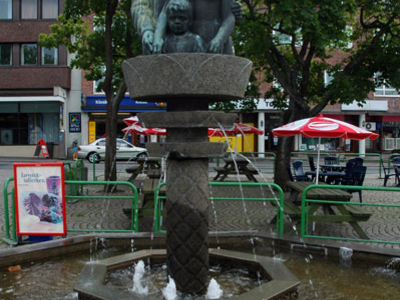 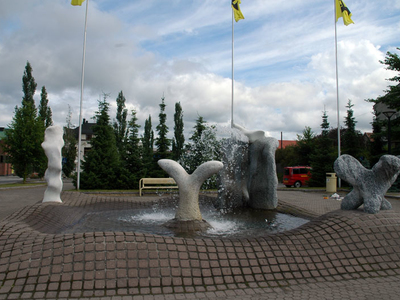 But this repair has allowed us in quite splendid isolation to go on a scenic route as much as 15 km.
Right through the trees at first were still visible in the river Glomma.

The Glomma is the longest and major river in Norway, 598 kilometers long. It absorbs water from 13 % of the territory of Norway.
The river originates from lake Aursunden, and empties into the Oslofjord near the city of Fredrikstad (Frederikstad).
Since the Glomma flows through the richest forest areas of Norway, before it floated the logs.
The combination of the availability of raw materials, hydroelectric power, and easy transportation have encouraged over the centuries the emergence of the industry on the Glomma.
All major wood processing plants in the country are now located along its length.
Many excellent ports were built.

In the village Spydeberg (Spydeberg) sat down on a bench to chew on something.
Rinat pulled the last piece of peanut casinocom purchased in St. Petersburg.
We stretched them for 20 days out.
A snack very high in calories and takes up little space in Luggage.
Washed them down with Norwegian waters. Delicious. No worse than the Swedish.

Norway of course is very different from Sweden.
The people here are wrapped up in themselves to the limit.
Not here to hear the welcome cry of "Hey" in the address when you pass by bike. And free maps at gas stations too.

At first it may seem that the residents Smyrna and uncommunicative, but it is not.
Everyone will show you the way or just to talk.
Just the Norwegians maloemotsionalny.
Perhaps this contributes to their severe climate, their territory is covered by mountains and cliffs.

The roads in Norway are even better than in Sweden.
It's hard to imagine how difficult it is for them to build here.
You have to chisel the stone to bite it , to lengthen the road to go around a particular area.
The track is quite narrow, but if to take into attentionnie small population and a small intensivnosti movement, it is rather a sign of prudence.
Everywhere perfectly smooth asphalt. Fun-to-drive - simply enchanting.
The awe of the natural beauty is gradually dulled and just start to catch a buzz, enjoy this whole situation, little by little absorbing the environment.

Norway has two official languages bokmål and Nynorsk.
This situation is due to the long rule of the Danny.

A long time ago, before the Railways the Norwegian inhabitants of the valley lived a very isolated and had each its own dialect because they do not understand each other.
In 1380 Norway was United with Denmark, and Danish language more than 400 years was the written language in Norway.
When the country gained independence that the idea is not to tear immediately with the Danish language and gradually introduce a purely Norwegian words and expressions.
This idea formed the basis of language - bokmål (bukmol) - called a "book standard"
And now bokmål says the urban population and the intelligentsia of Norway.
Bokmål is the first language of 88% of the population, i.e. about four million people.

New Norwegian language, Nynorsk (nynorsk), based on older Norwegian dialects and old Norse.
It is the language of the province (most Norwegians, especially in the villages, speak it).
Nynorsk is supported by Norwegian nationalists to erase the traces of the Danish supremacy.
New Norwegian is the mother tongue of 12% of the population, i.e. approximately 500,000 people, more of whom live in the West of Norway and in Oslo.

The differences between bokmål and Nynorsk are not so great, they're both variants of the same language.
Vocabulary in General.
The most important differences lie in the fact that in Nynorsk more complex system of declensions and conjugations and more diphthongs.

So if I started the conversation on languages, I'll present a recently found me on the Internet an excerpt from a study of our Bashkir historians, linguists, seeking a place of Bashkortostan in world civilization:

So - no more, no less.
Maybe because we are so good and at ease feel in Norway that the Norwegians - it's our own Bashkirs , only the fates thrown when the edge of the earth and have forgotten their ancestors:)

Rinat suddenly saw peloponesse. Parents on bikes and baby in the truck-trailer.
While he snatched his camera gun, yet suggests the lens was able to capture them only from the back.
However this fact is enough for half an hour swearing about a failed next masterpiece, as if the Norwegians were to blame for the fact that we don't pose.

In the evening we drove more than a hundred kilometers.
My task was to stay overnight as close to Oslo. To the next day to enter the city as early as possible.
I had heard about how hard it is to travel to and from the capital of Norway and wanted to have a little more time.
The military pilots have a term - "the airfields" , that is, the site is located as close to the front line (unlike the airfield).
In our case, needed such Parking lot ,allowing us with minimal time and effort to enter the next morning in Oslo solemn Covealkadai.
We found 10 km from the capital.

First saw a small lake right near the road.
On the one hand there was a small town , and the opposite Bank was a hill covered with forest. It was on this hill is situated in our Park-hop.
On this day we got to joke relatively early, at 20:00
Because there was plenty of time to shower , eat, and lead ammunition in order before publication.
We could not look ragged and drop the honor of Russia in the NATO city:)