Damp socks and fugues by Bach

Chapter in which the Baby covers himself in grey mud, and Carlson engaged in extraction of selenium

Don't you freeze, you're dry there is no place? 'said the Kid.
Carlson, apparently, still didn't pay attention to it, but he immediately regretted it.
- Of course, the freeze, he said. But is anyone worried?
Does anyone can lift a finger, if the best friend comes in, soaked to the skin, and he has a tooth on tooth from the cold?
Is anyone going to make him remove the wet clothes and put on fluffy, beautiful bathrobes?
Does anyone care about the other? concluded his tirade Carlson and reproachfully looked at the little Baby

That morning I woke up unusually early.
About five in the morning, nature called me out to perform the necessary ritual.
I got out, yawning in the warm tent and was stunned.
The sky blazed with the flame of the rising sun and reflected in the water of the lake.
If liquid fire was pouring over us from the horizon.
All this contrasted with the bluish black clouds and it seemed a kind svatos at the end of the tunnel.

I ran for the camera. Rinat, my hearing rapturous sighs, too, woke up and, scratching his sparse hairs on his belly, followed my example.
We admired the sunrise for fifteen minutes, and then went back to bed.

The next morning gloomy Rinat, following the proclaimed principle of economy food on your own body, try to eat crispy cookies with tea.
However, I managed in a hard expression to suppress grocery separatism and almost forcibly fed him, bought me the day before our usual cheese, milk and ham. 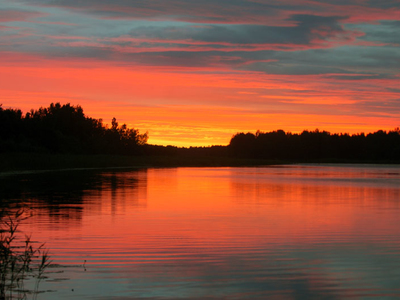 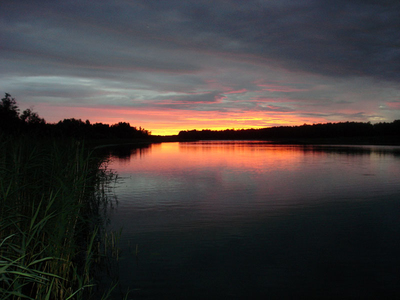 Went to drizzle when we set off.
Then I picked up the first puncture of his cell - a flat tire.
Much we are not detained and left with the lake to the track soon we drove to Eskilstuna(Escilstuna)

The city is very ordinary, without any frills.
Pure and simple.
The city of metallurgists. Very beautiful old part of the restored houses of the past centuries.
Many monuments to the working class and women of different ages, dressed or undressed according to past years.

It was a Sunday and some shops were not working the other was going to do it with 12 to 16 hours.
As long as I went Rinat looked in the shop window some clothes and lit up to buy them.
Had to wait for noon. The city inspected quickly and the remaining hours before the opening sat under the awning of a bus stop, so as not to get wet.

Next was platikanova automatic toilet that had a desire to visit.
But the desire was gone when a resident threw a coin in the slot, but to get inside failed.
Pulled, pulled shrugged and left. 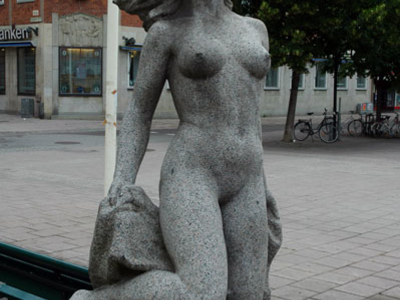 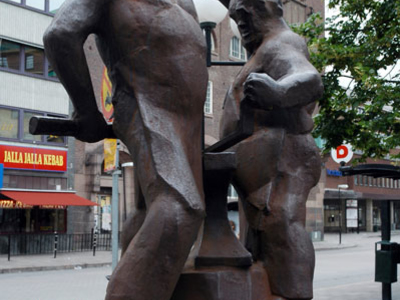 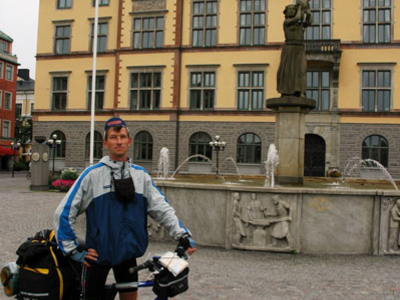 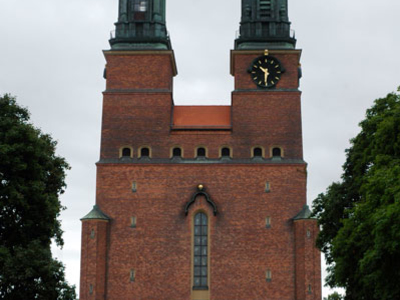 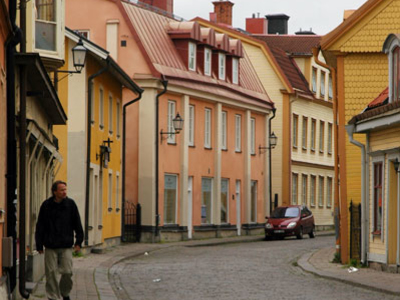 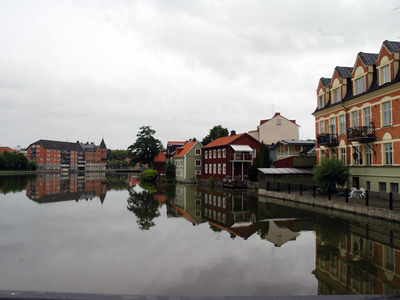 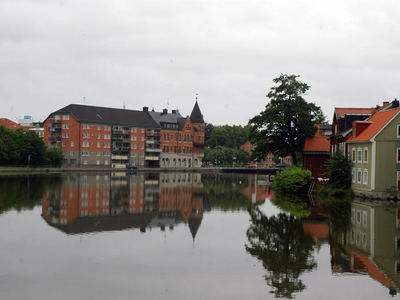 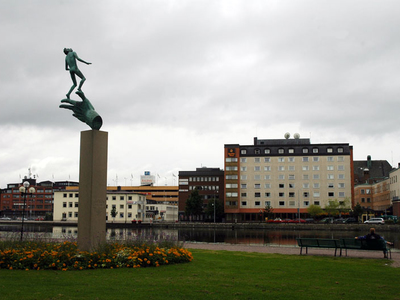 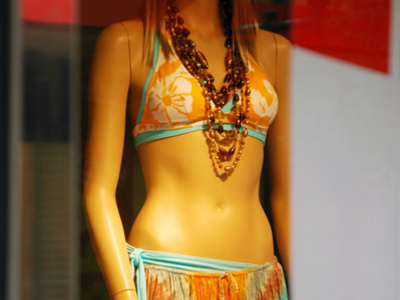 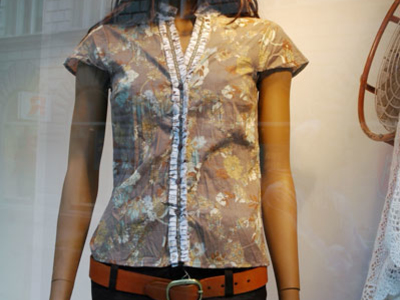 The chimes on the city hall struck twelve, and the next two hours we indulged in primitive shopping.
I must admit the local shops on the range and quantity of clothing and other goods were among the best he had seen in Sweden.
Perhaps Eskilstuna is a Swedish trendsetter.

Finally went on.
After leaving the town the rain started running in earnest.
Looking ahead to say that this day was the most wet for the entire trip. Rain almost without stopping, poured us six hours in a row.
Then heavy rain poured on us from head to toe.
Large drizzle of water through the clouds penetrated in all the cracks - if you go past the city fountain when the wind is strong.
Bags on feet naturally save soon ceased. Vengeance and the water squelched in my shoes.
Saved from freezing only constant physical activity when pedaling.
Water jets dripped from his hood and tip of the nose continuously formed drops, contrary to his sekatawa.

In the village of Arla (Arla)</strong> went to warm up and to buy food in the store.
Rinat fundamentally again only bought crisp rye crispbread.

Wanting to take a shortcut, turned on the map on a secondary road to Lana Brooke (Lana Bruk). But after a few kilometers the asphalt ended.
And began the painful riding in as much as 13 miles on a dirt road.
Moreover, the soil here was a strange composition is diluted with water resembled grout.
And of course my tires eared beautifully cling to this solution and evenly placed it on my body with tion to the belt.
Even though I tried to go as quietly as possible helped a little.
As a result, when we got to the pavement my feet were radically gray-white color.
About the bike and the backpack I generally keep quiet.
Rinat was a little easier - he's not as aggressive tires and front fender fulfilled his role.
But it was not too clean look.

About half an hour to clean. It was a shame to go at such squadname civilization.
To get ready I had to spend almost the entire supply of drinking water as other sources was not available.

The rain calmed down around seven in the evening when we reached the city with a long name ackers-Styckebruk (Akers-Styckebruk). Here Rinat conscience woke up and he, with a heavy sigh, I bought different products on the needs of our insatiable wombs.
Scored well as water, by filling all available capacity.
And I with great pleasure took the raw changed socks and shoes to dry.
In the hope that more rain today will not.

It was time to think about bed.
Crossed the highway E20 and went along one of the bays of lake mälaren.
Yes, Yes it is the lake which is Stockholm.
We almost returned there where began the way.
Was quite a bit.

On a steep hill plenty of picturesque houses.
And in the distance on the opposite shore of the Bay WidnesXia town of Mariefred (Mariefred), which translated means Peace Mary
The city is famous for its vintage narrow-gauge railway and is also connected with the work of German writer and journalist Kurt Tucholsky (1890 - 1935).
Since 1933 he was a political immigrant.
For a writer, Sweden has become the last refuge - he committed suicide and his remains rest in the local cemetery

The town is small and very cozy.
Due to the strong optics of a telephoto lens could see a white Church tower and low houses with tiled roofs.

The hill was clearly visible spires of the gripsholm castle (Gripsholm) - another attraction of the city.
The castle is located on a small Peninsula jutting into the lake.

Built by Gustav Vasa in the end of 1530-ies. the castle is one of the best preserved in Sweden. The name of the castle was named after Bo Jonsson Grip (Bo Jonsson Grip), the Swedish Chancellor, 1380 founded the first castle in Mariefred.
The rule of Gustav III, one of the brilliant kings of the XVIII century, transformed the old fortress into a brilliant classical Palace. In one of the towers of the castle in 1792, the theatre was built. The last time the theatre was used in 1987 during the celebration of the 450th anniversary of Mariefred.
In the castle preserved interiors from all periods and in addition there is a rich picture gallery of portrait painting in Europe.

But this is not what caught our attention and hearing.
And divine music sounding over the surface of the lake.
The acoustics were great - there was not the slightest echo and all the sounds came to us absolutely clearly.
You can see that the concert is outdoors in the Park in front of the castle.
Near the pier was white hull and masts of many yachts.
The many tables standing in the open air. Behind them people sat and listened to the presentation. 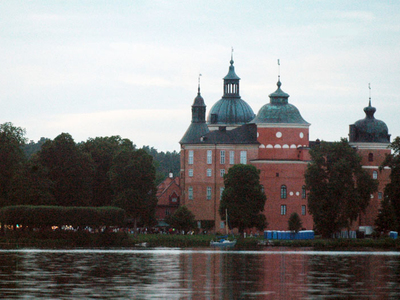 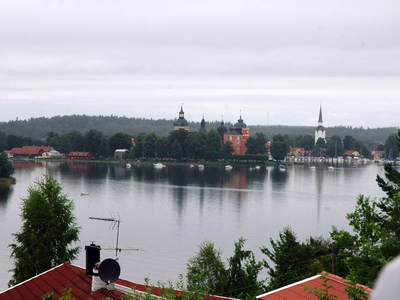 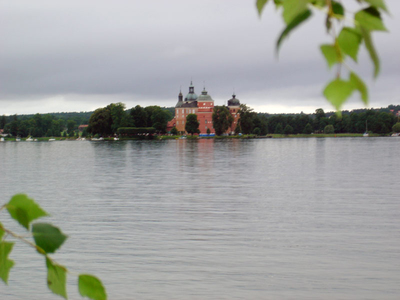 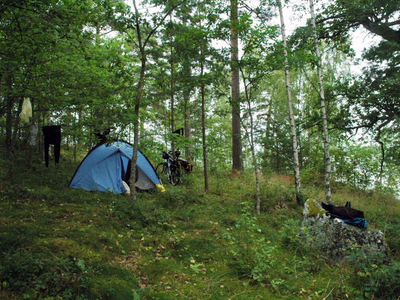 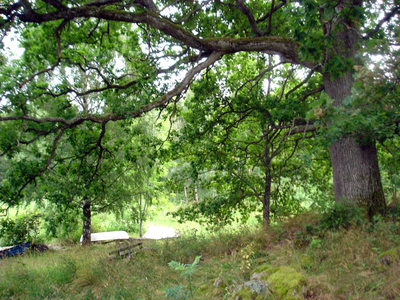 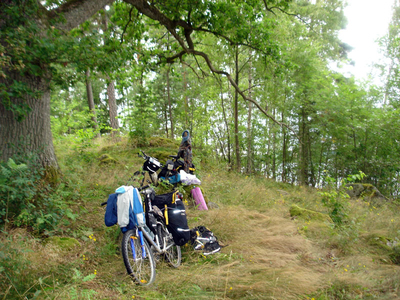 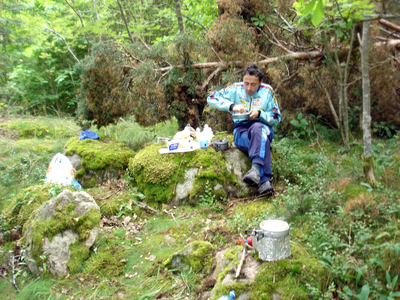 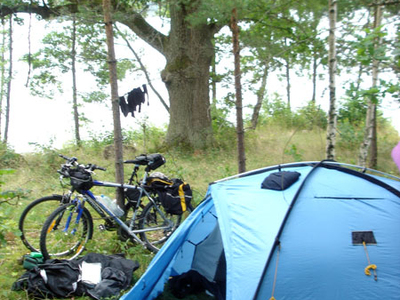 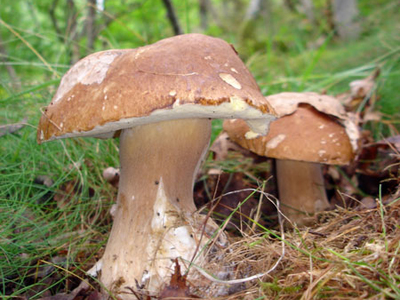 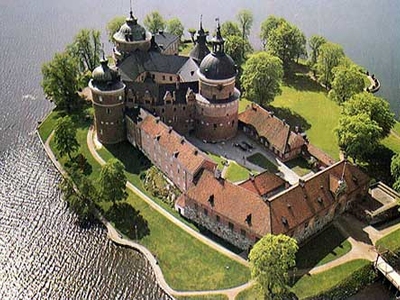 We certainly wanted to stay anywhere too here so at least at a distance to join the celebration and listen to the inspirational chords of classical music.
The map was specified, the beach, and we are confident that he is there and will go in that direction. He was there!

A small beach with a wooden pier-boat pier.
But the place we found a hundred times better, leaning along the shore for a few tens of meters sideways.
Under the canopy of huge trees are several girths.
And most importantly everything was perfectly audible, and if a little to go and see.
First, we emptied our backpacks, hanging drying wet things (although by the morning they are still not really dried out) and went to the lake to wash themselves , to wash dirty clothes and wash the bike.

Then cooked the food and enjoyed the music.
The concert lasted three hours without stopping.
I remembered the scene from the movie "the Idiot" - where the main characters and Prince Myshkin are going to listen to Strauss.
And the orchestra played in the Park of the mansion.
In Russia all this wealth of the spirit, too, was when that unfortunately is almost lost now I guess.

Walking around our Parking lot, I found some great mushrooms.
Rinat immediately got the idea to cook them into a soup that and wasted a pint of gas and a hour of time.

And then with a straight face chewed uvarivaetsja pieces for a couple of minutes.
And sighed - the result of the work clearly did not correspond to the effort invested.
Suppose it is of little consolation is the fact that mushrooms are a great source of selenium element influencing the immune system
Selenium is an incredibly powerful antioxidant necessary for the person throughout life. Among other things it is contained in mushrooms.