Cycling / The new adventures of the Kid and Carlson / Bread and salt in.

Bread and salt in.

Chapter in which Carlson scolds soup and advised to scratch turnip

- The taste is Fox poison...
However, you better know what you're put here, ' said Carlson.
- Take rather big hose, my throat is on fire!
He wiped his tears.
Why are you crying? 'said the Kid.
I remembered a very sad thing, ' said Carlson.
"For what?" -- curious Kid.
- This meat sauce, ' said Carlson.

The most important thing before a long trip is the technical condition of the vehicle.
Better a hundred times to check everything and stock up on spare parts than to be in the middle of some fields or the woods with a broken bike and without any chance to resuscitate him.

Because a good 5-6 pounds of weight was all sorts of keys, cameras, and tires.
By the way the spare tire on a long trip to take is highly desirable.
Better suited for this foldingovye tires that may be easily compactly folded.
I had two alternatives - IRC Mythos XC Slick or Schwalbe Marathon XR.
The last one I purchased on the Internet shortly before our trip.
And to be honest for a long time experimented.
I changed the IRC and Schwalbe sometimes ten times.
And after this went for a while.
And as a result, after much hesitation, took a hike all the same IRC. German Marathon XR tyres have Kevlar puncture protection and, unfortunately, this protection makes them heavier.
Not by much, but heavier.
It would seem that 800 grams is nonsense, but the motion still felt.
Akathistos bike to become worse.
Thinking that in Sweden, fear of punctures need much less than somewhere in Russia I chose the road tires IRC.
The undoubted advantage Schwalbe is the shape and pattern of their tread, by which even in heavy mud and rain on a bike without fenders you get dirty withall slightly.
While Japanese IRC pour in full.
What I discovered in Sweden for the umpteenth time.
But as they say, I chose the lesser of two evils.

In addition to tires and cameras in our Arsenal, were almost all possible keys and kits for repair, spare spokes, chain, and grease. Of the common things took a three-man tent BASK Бонзер3великолепно performance in different weather conditions.
Its strong side - thick durable aluminum arc and quick Assembly and disassembly of the awning and vnutrennei tents at the same time.
For food - multifuel burner MSR Dragon FLy
For photographing beauty and a favorite or two camera Nicon D70 (with optics kit) , Sony DSC W12 and a small tripod height of 1.5 meters.

Food - an indispensable stock packaged in bags with holes kas like "Zara" or the "magic porridge" and tea.
Based Breakfast-a dinner for 25 days. Usually we take oatmeal in the morning and buckwheat and rice for the evening.
These cereals have been proven more than once. At first taste they were no worse than the loose grains and, secondly, dirty cauldron and third, it is easy to calculate the required amount.
In the amount of cereal pulled for 8 kg for two.

Total with the personal belongings of weight velorjukzakov for each was approximately 21 kg
In the process of moving to this weight is added the food and water. So sometimes our cargo reached 25-28 kg.
This weight limit - further boosting the already strong effects on the process of riding and not for the better. 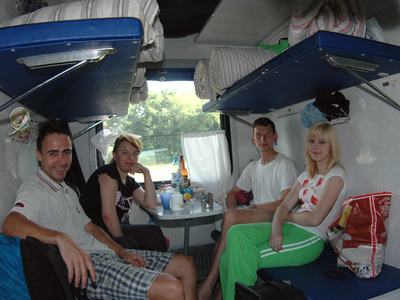 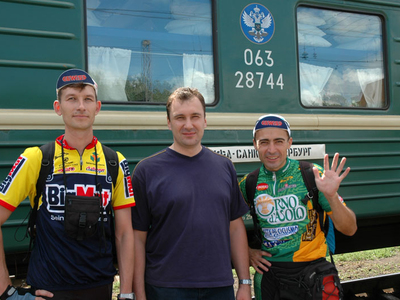 At the station traditionally we were seen off by friends. Memory photo all - in a way.

With fellow travelers we again were lucky.
They were two PTSarovatelnogo girls. Irina - Queen of Polish mayonnaise "Dream of the mistress" and Julia - the girl from Davlekanovo going to conquer the city on the Neva.
Prerasno we spent two days of our journey talking on all sorts of topics.
And in the end Irina even invited us home to wash with a long way.
However, we, unfortunately, did not take advantage of her hospitality either before or after.
She lived with her parents and we thought that would look kind of strange if suddenly two dusty man with a bike filled up to wash.

Peter greeted us with 30 degree heat.
Unload from the train, was engaged in the Assembly of our two-wheeled "Kalashnikovs".
During these trips, transfers with constant traffic reach automaticity.
To assemble or disassemble the bike and pack it in a case does not take much time.
Hung veloryukzaki, and moved from the station area.

The habit after a year break to control the bike with 20 kg behind it was a bit unusual.
By the way the opposite is true - when I travel a lot with load, and then it is removed, then empty the bike ,like a bird, tries to escape from the hands, the wheel from walking side to side like the neck of a restive horse.
And the feeling that the rear wheel all the time aim to bounce upward.
But after a while the body gets used to manage the new load and everything comes back to normal.
Then we got the bright idea to leave veloryukzaki in storage.
Not to wander with them around the city.
Especially since it was quite inexpensive.

After Ufa the city of Petra seems awfully noisy and crowded.
Especially in the area of Nevsky Prospekt.
Sometimes it is impossible to go neither on the pavement nor on the pavement, so dense flow of cars and people.
Cyclists, too, as it is not particularly evident.
But we do not pay attention.
Everyone rush somewhere and stare at the two brightly dressed bikers with huge trunks behind no one is interested.

The city of course is beautiful, what can I say.
No wonder in him from all over the world are eager travelers to join its long history , its palaces ,museums, bridges , channels and special spirit that hovers around.

Along the way we stopped at a tourist shop "Terra".
How many there any useful things that can not be found in our so-called Ufa sports shops. 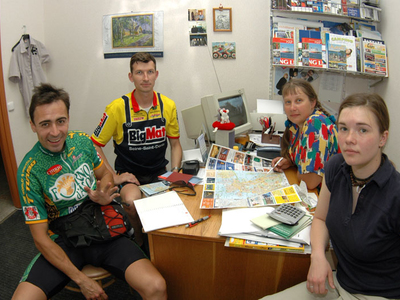 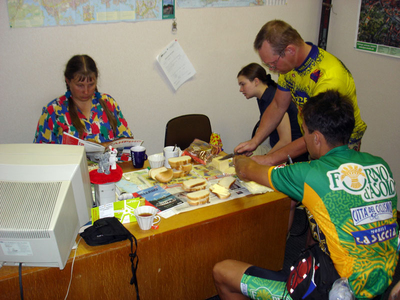 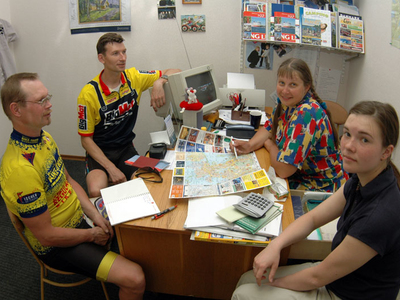 Nevsky,Ligovsky,Moscow prospectuses and we safely rolled to locations mysterious Cycling office under the name "rainbow".
Abandoned old factory for the production of something unnecessary huge amounts, now in polovinnoe building.
However outside of this I will not say.
The gray time and smog bricks, small window and sighted a large hollow vintage patio was slightly affected by civilization and St. Petersburg grin of capitalism.

Inside was quite different.
Renovation in one word.
"Rainbow" was located above a furniture and interior store selling spy gadgets. However this did not spoil:)

This firm ,which is one of the few in Russia, has been successfully organizing Cycling tours in foreign countries.
Scandinavia is one of their specialties. Absolute security in these countries allows them to invite their tours everyone from small to large. You only need the desire and the ability to pedal.
Group travel lightly , followed with the Luggage and products going machine maintenance. Any tired can get off the bike and dive in the car.
In the summer their tours must be booked in advance - from those who want no end.
The team they have a small but close-knit. The main work is done by three people - Light, Andrew and Yuri.
If someone wants to know more about Rainbow, visit their website www.velotur.info

Greeted us very warmly.
PicLe small dinner and exchange of information and experiences, Andrew took us on Peter.
On the handlebars of his bike hanging two copper bell and when riding they melodiously tinkling, informing passers-by that it is necessary to give way.

Before these we have changed the ruble Swedish Krona in the nearby exchange.
Hall of the exchange is teeming with bugs-changers, offering any currency. Yuri, our guide, assured that everything is fair, but I think to make it not worth it.
You can always run into scams and especially in a strange city.

After the train I felt at ease and ride on Peter not particularly inspired me, rather the contrary.
The beauty of the city on the Neva river on that day, I to perceive, could not.

And of course we could not see Viktor Nechayev, who recently became Chairman of the club "Velopiter", succeeding Ilya Gurevich.
Victor for several years helped us with advice and sent all valorously that we bought over the Internet in St. Petersburg.
Main profession Victor - Ambulance doctor.
That day he was on duty at the station and gave us some of his precious minutes.

I must say the people in St. Petersburg are responsiveness and friendliness.
There was not one person of those whom we met who would refuse to help us. 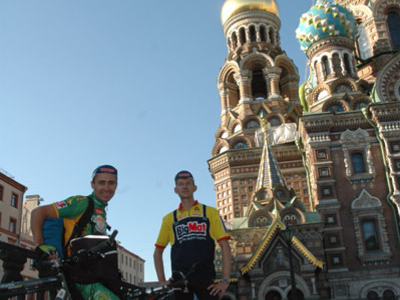 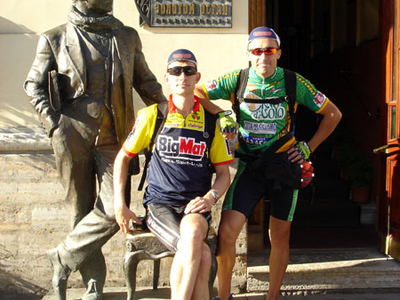 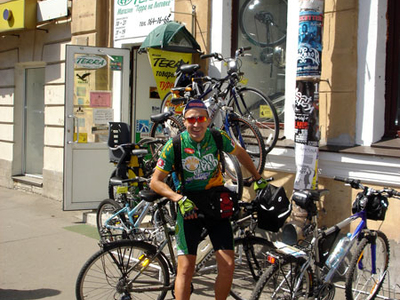 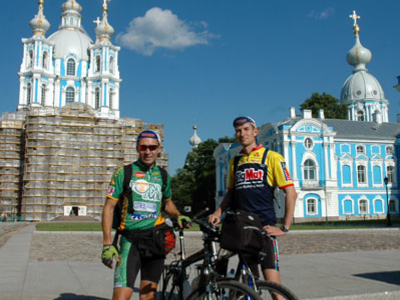 Ustalosti affected Rinat. When Andrew took us to a cheap cafe near St. Isaac's Cathedral, my friend was subjected to severe obstruction of the owner of this eatery because he saves the meat for the soup and pours sunflower oil to make it seem that he is rich.
Rinat raged and yelled that knows all the ins and outs of the master to the seventh generation and is alive as it cooks commit fraud with food in the kitchen.
Andrew not accustomed to the antics of my friend was a bit flustered.
Together we managed to calm Rinat and return his thoughts in the favorable direction.

He didn't know that recently English scientists have come to the conclusion that the soup and the broth turns out to be harmful to the body.
The fact that they contain a lot of substances of meat, in fact, poisons for the body.
Typically, the neutralization of these poisons is engaged in the liver.
But here's the problem - the broth is absorbed so quickly that the liver doesn't manage it "handle".
And organic poisons begin to run through the body, harming other organs.
In addition, the meat of animals and birds almost always contains growth hormones, residues of vaccines, antibiotics.
When cooking all this, of course, is in the broth.
Doctors nutritionists generally suggest to merge the first water in which the meat is cooked ,remove the fat from the soup and fill "zazharku" in vegetable oil.
It's hard to say it's true or not. :) 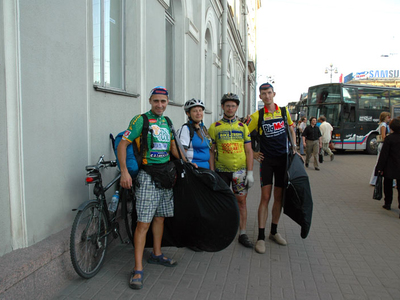 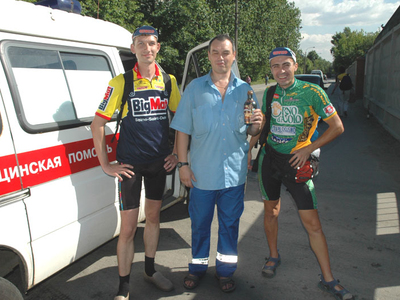 In the remaining time before departure of the bus to Helsinki time, we went to the station and took their veloryukzaki. Bought some food and water in the road.
The bus was supposed to depart from the Oktyabrskaya hotel , located in the same square and railway station.

To see us, Andrew came up with the Light. Rinat , sentimentality, strongly called them with bicycles to visit us on a Ural.
- We are not worse than in Sweden - he said - So scrub turnips, guys!
"Guys" sheepishly nodded his head and promised to scratch at your leisure.
◄ Prev
Next ►