Cycling / Norway.Naive.Super! / The flowers in the middle of the rain

The flowers in the middle of the rain 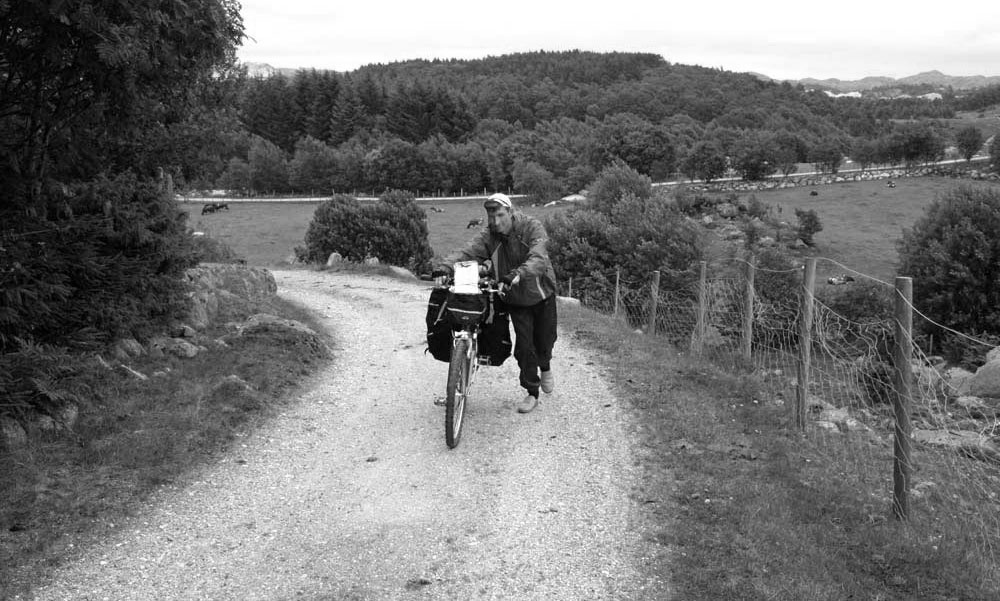 ... No man owns the Land, and Vice versa.
The flowers are our sisters, and horses, eagles, not to mention the moose — brothers.
And how can a person to buy or sell anything?
Who owns the heat of the air, or the rustle of the wind in the leaves?
Wandering in tree SAP carries the memory of those who lived before us.
In the murmur of the brook ringing voice of my father, and his father, and so on.
We must convince the children that the firmament on which we walk, fertilized by the ashes of our ancestors, and what we do to the earth, will do so then with us, so that, spitting on the ground, we spit on... 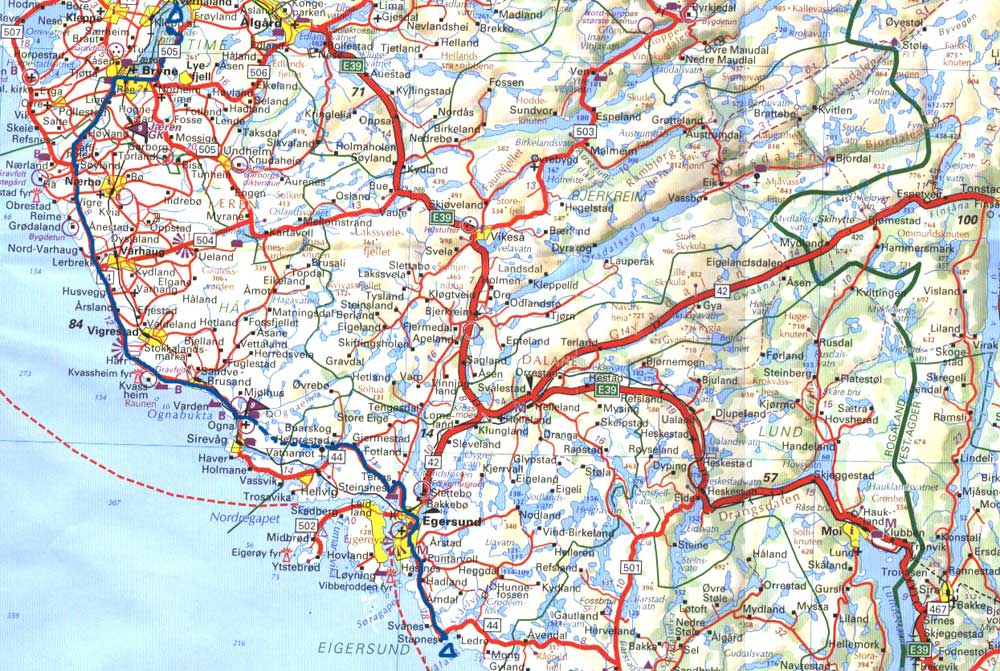 The morning is not promised in this day, nothing good in terms of weather. It was a little rainy.
He then stopped then started again.
Grey wool clouds rushed across the sky drawn by the gusty sea winds.

Our neighbors slept or were really quiet. The van was not a sound.
However, it was necessary to gather in a way.
But no weather could cancel our Breakfast.
My appetite after the illness has recovered and I can hardly put myself in dry rice.
Ilya, as usual poured his portion of ketchup to the state when it was not absolutely clear what he eats -tomato or rice.
The last straw for me was probably aromatizirovannaya Newby tea with lemon.
My stomach can't handle it and made me terrible heartburn. 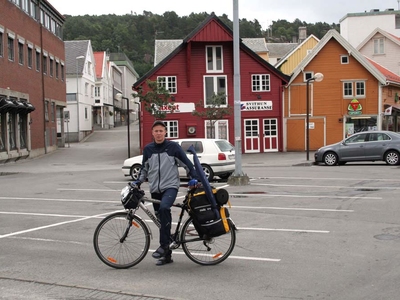 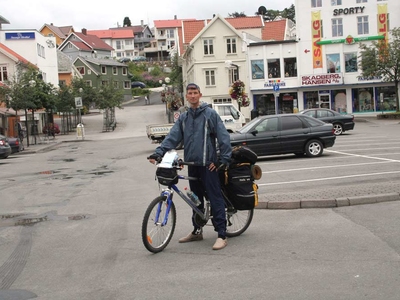 After half an hour we rode in the morning Egersund (Egersund).
Egersund is a coastal town in the district of Rogaland.
The city's population of about 9 489 inhabitants.
Egersund has one of the best natural harbours in Norway, are caught here, the largest number of fish in Norway.
Several internationally known companies are based such as Simrad (formerly Robertson autopilots) and C-map (producer of electronic sea charts).
In addition, the Corporation AkerKvarner here has production, which specializiruetsya on building of parts for oil platforms.
The majority of the industry connected with the sea and ships.

In 1940, Egersund was among the first cities in Norway occupied by the Germans during the Second world war.
Egersund was important to the Germans because of its good harbour and the Telegraph line between Norway and England, which was located there.

First we stopped at a gas station to get fuel for the stove.
Went inside trying to explain to the boy that we need 1 liter burner, and it is absolutely safe as a bottle of pokryt antistatic substance and sparks can not be.
The boy politely shrugged and said that was poured themselves as necessary.

Here, the system of notification - some gasoline from the column, and then go pay at the counter.
The jet gun has a good and try as I might, but shed badly and had soaked a little.
The result is scored liter, and paid for half.

Then I decided to ask the Tums.
But the efforts were in vain - to explain what I need was difficult.
First I was given paracetamol (in Norwegian same sounds). But this paracetamol and so we have as the dirt was with them.
Then Ilya found in the dictionary heartburn on English.
Seemingly here it is - now we understand.
But alas - heartburn (Heartburn), they were unknown.
I tried to depict heartburn for yourself. Roll his eyes, wrinkled his face and made gagging.
You laugh, but try gestures to portray themselves.
The result came, all the staff refills to look at this circus.
Everyone was smiling but bewildered shrug, not knowing what a cyclist wants from distant Russia.

Put it back in a couple places, the pharmacy is not found.
In the end I decided to look for a soda.
Again, the trouble - forgot the soda is called in Latin.
Because in the supermarket nobody knew of the name Soda.
As a result, after long hesitation, in the culinary Department among the vanilla and cinnamon I purchased a package at a known share of imagination could be mistaken for the desired product.

Finally finished with these ordeal left the city.
We drove along the coastal highway 44, which is also a well known tourist route called "the Way of the North sea". 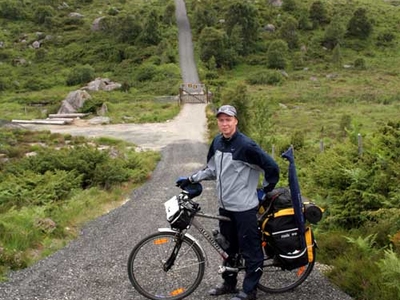 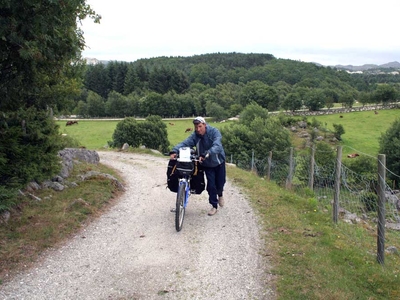 There are popular routes offered to tourists in Norway.
Near Egersund is a local Stonehenge in miniature-called Folkemuseum - the stone circle.
Are the stones arranged in a circle.
The artifact has a diameter of approximately 21 meters and consists of 16 standing stones.
Some of the stones up to 1.2 meters tall.

A dirt road length of 8 km leads through a treeless mountain plateau to a height of 117 meters.
Among picturesque lakes and boulders covered with moss , and sparse bushes.
A completely Martian landscape.

The road was built a few centuries ago for the needs of the local population.
About any touring then the speech was not.
People engaged in business , survived as best they could.
It's in these times there was a bunch of lazy traveling about the world on bikes , climbing on foot through the mountains.
Scientific and technological progress Visualizer for humanity a lot of free time which everyone takes as they can.
But I guess touring the best of pastimes.

So only in 1994 that was abandoned after the construction of the route 44 old road trim and adapted for Cycling and Hiking.
Norwegians in General masterand this.
Any piece of its territory, which is a little bit you can pull the ears to the sights they're doing this attraction. 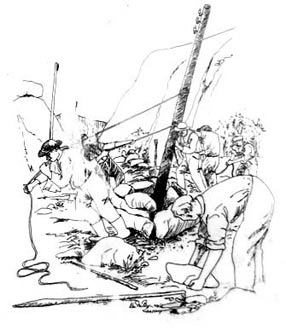 Most importantly a good story are who, when, why and what.

So there's a placard hanging at the entrance.
Muzhchinki with picks and shovels cut the rock.
Put telephone poles.
In General, arranges the mail for the Norwegians.
And next is the postman with a belt pouch , a pipe on the neck and what is a whip in her hand.

Halfway there we got hit by the cold rain.
and in that moment, when I departed from the road and perched at the boulder excited to contribute to the ecological balance of the country and to work on improving humus.

The result had to curtail activities and trot back to the bike, on the go buttoning his pants and jacket.
Ilya was already closed case vegoruksa and was wearing his orange McKinly.

Riding under heavy rain not too nice. Later we got used to such weather and didn't pay her special attention.
And at this point it was quite uncomfortable. And in addition, became something very cold.

When we have a tooth on tooth did not get, our eyes were opened to what the grey sheds in the woods.
Turned out to be floral greenhouses. 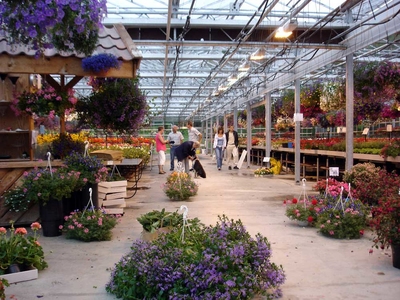 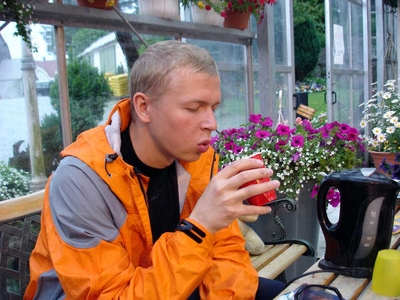 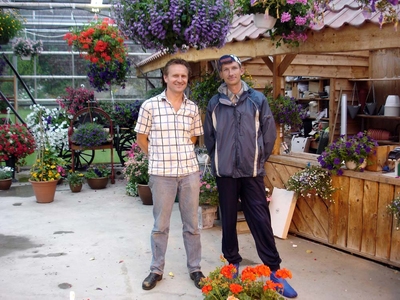 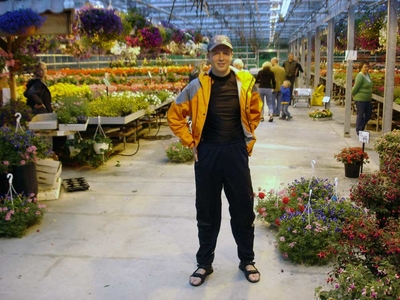 Inside wandering people, and we also decided a little warm up and went inside.
There was a sea of flowers and a riot of colors.
Flowers live in a variety of shapes baskets.
They are so fond of Norwegians. They decorate their homes with flowers, sometimes to such an stepeni that even the walls are not visible.

We were approached by a young man who turned the owner of the flower shop.
Asked where we were from and invited us to sit to warm up.
They gave me coffee and cookies.
Buyers postiano drove up in their cars and took armfuls of flowers.
I scored the trunk of his jeep. Olof was the name of the owner, running from them to us.
Sell a few baskets and to us - to ask about this and that.

Generally speaking, a love of living color is something normal, human.
It's like a love of life.
Much harder to understand why we prefer the dead flowers cut from the beds and stuffed into the water to prolong the agony.
Bouquets created by florists only looks beautiful - and, in fact, dead.
Will take a few days from the past, and the splendour will not be over.
Why our women love when they give SUCH flowers.
Why our men don't understand that giving a dead plant is not the best way to show your love.
For me it is the worst cactus in a pot more beautiful than a bouquet of fragrant red roses, once and for all shubinyh with a knife, tear them from the ground.
And water drops on their petals are the tears of the innocent ruined plants.
Ruined in the name of money and misconceptions about true beauty.

An hour warmed up finally although the pavilion was not hot - not even wanted to go out again in the rain which did not let up.

And the Norwegians were all wearing shirts with short sleeves and even shorts.
For them looks like it's weather - tropics. 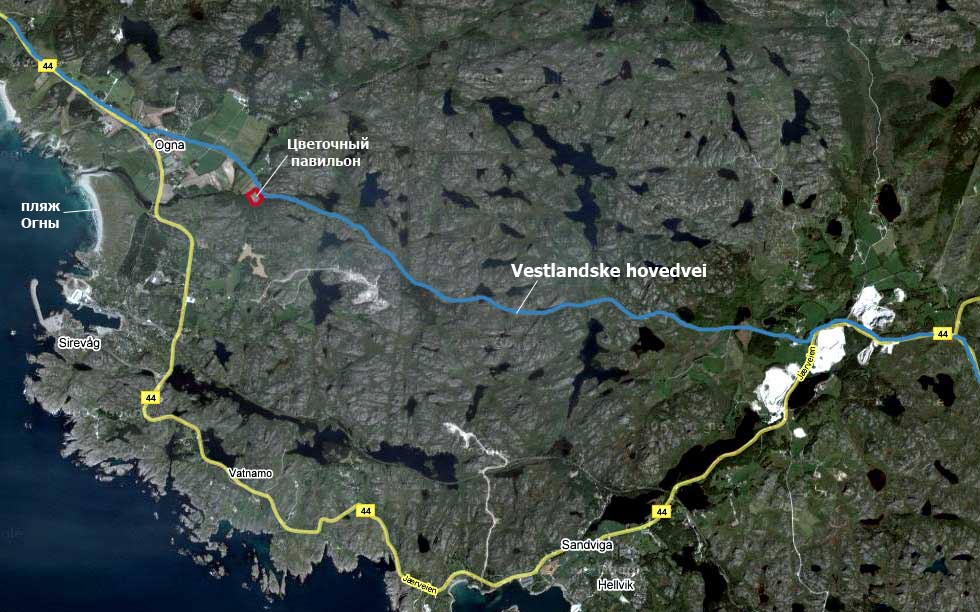 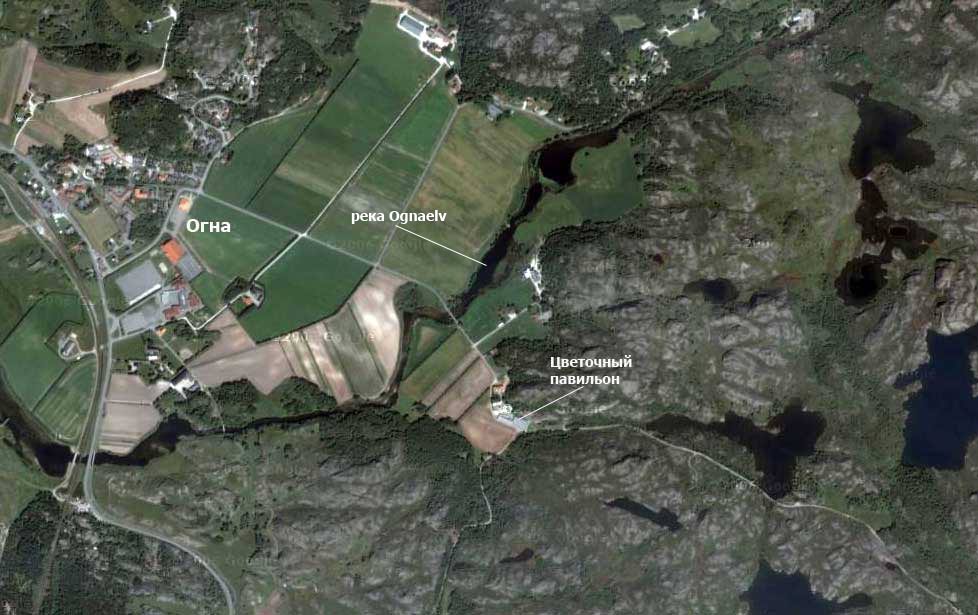 And with different degree of approximation. 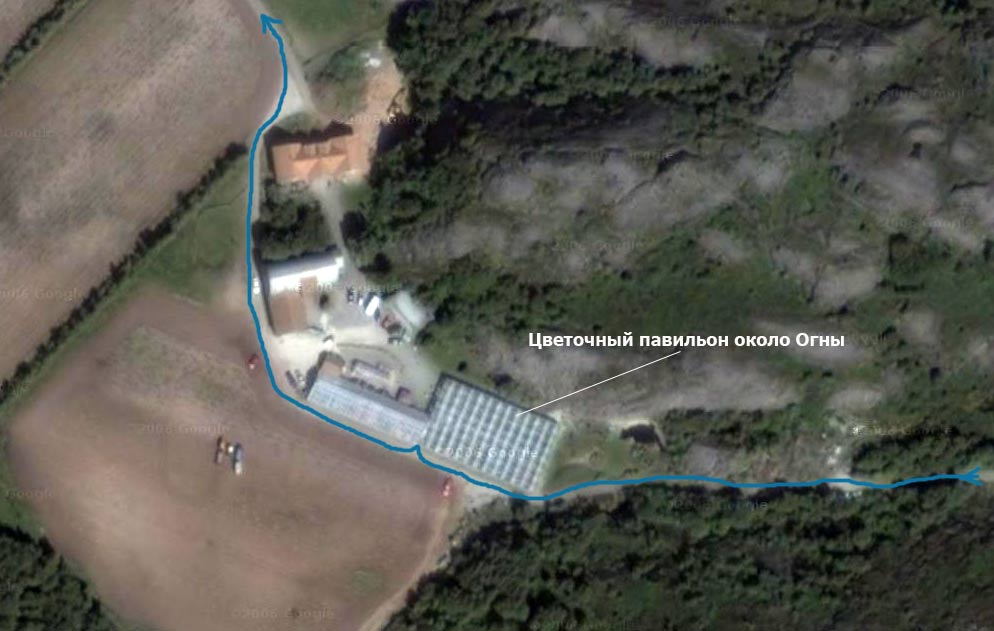 Leaving hospitable place, left again on route 44 to the village Ogna(Ogna).
The mood was very up.
Theit always happens after talking to good people.
And others here and we did not come across.

Ogna is a village in the municipality of Ha. Its population of about 330 people.
The village has a small Church Dating to the time of the middle Ages.
After a fire it was rebuilt and became more beautiful than before.
Ogna has beautiful beaches by the sea with magnificent long sandy beaches.
And the river Ognaelva where a very popular salmon fishing.

It is a pity that the weather did not allow us to lie on the sand. It would be very helpful.
In General, the sun coast from here to Stavanger favourite vacation spot for Norwegians.
Theirs Sochi.
We utterly failed to appreciate it.
The rain was pouring down in torrents, and the sea was a small storm.
So we are biting at the bit, rushed at full speed ahead.
Fortunately the area was smooth and we kept the speed below 30 km/h.
Neither before nor after this flat area we have not met.

As a result, after a couple of hours we rode into the city Brun(Bryne).
Bought some food for dinner and Breakfast and decided to stay overnight somewhere on the shores of lake Froylandvatnet nearby.

On the East side of the lake is overgrown fairly large forest.
Here was like a wild Park where ran and walked by local residents.
To the shore they were unable to leave - not found approaches and after some wrangling with Ilya ( no one wanted to give in), located under a spreading spruce ,slightly delaying the flow of water from the heavens.

Wet from head to toe already in the tent, changed into dry and, after supper, lay down to sleep in hopes that tomorrow is a new day. And it will be dry.
The Lord perhaps in the dream, I heard our prayers.

And soda, I drove the entire trip and brought home - not useful.
◄ Prev
Next ►