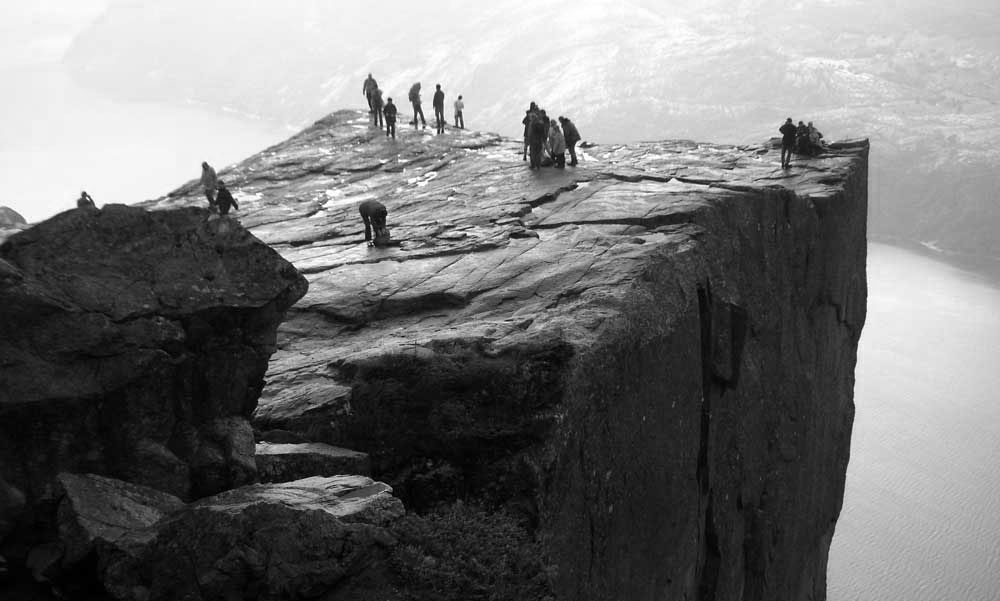 ... I asked Lisa how she thinks - will all end well.
She asked what I mean when I say "in the end".
- If you mean the end in the literal sense, then, of course, it is unlikely that all will be well.
And all this, of course, a matter of faith, says Lisa. - Some believe in fact that will live a few lives or that will go after death in a wonderful place.
If it is in the sense that over time, then gradually everything will be settled, then we can say that, perhaps, so be it.... 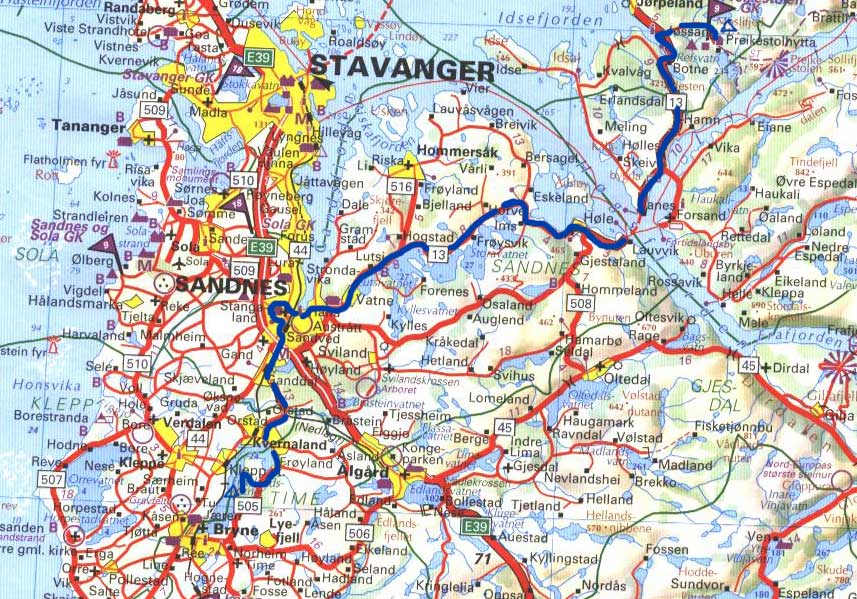 The rays of the morning sun broke through the wet spruce branches.
The day promised to be wonderful.
I climbed out of the tent and looked around.
The omnipresent dampness permeated our belongings.
Water dripping from the canopy tent and saddles of the bikes.
On the velorjukzakov that stuck needles and lumps of grass.
Yesterday's rain-soaked turf elastically springy underfoot, releasing of air and the thud sounds.

We were out in the open meadow to get a little dry.
And they started Breakfast and mineralnymi procedures.

Bask tent excellent because it dries quickly.
My socks lost another half cent of water when, awning our portable houses were completely dry.
A good measure throughout. To wait for of all things there wasn't time.
And socks I usually strapped to the slings of a backpack.
The wind movement will finish that the beginning of the sun.

By lunchtime we were in Sandnes (Sandnes).
That's a pretty big city on the banks of Gandsfjorden.
Overgrown and almost merged with Stavanger(Stavanger). 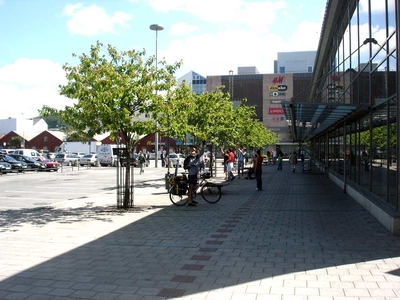 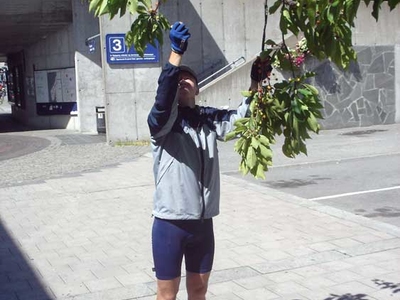 For I still love Norway, so it's freeatny Internet.
We searched the Internet and found it in a huge library.
It was a little awkward to come into a clean building.
After yesterday's weather, we looked a little worn and bomzhevatogo.
However, the woman on the watch even eyebrow does not lead, and kindly explained how and where to go.
There is nothing better in exile than to hear or read something about the Motherland.
Learn how it changes while we're running kilometres wheels velosipedov.

The library was located near the bus station.
There grew rows of unripe cherries. How could we drive past and not to kick a bit.
The thrust of the Russian people to the freebie neistrebima.
And later we bought a normal ripe at some Turkish or Pakistani shop.
Expensive of course but decided to treat myself a little.
Lunch was arranged in the square near the town hall opposite the monument wormy Apple.
Apple stood on four legs and resembled an elephant without a trunk.
Like the Norwegians just surrealism.

On the outskirts of Sandnes lost. Could not find the way.
Everywhere there were highways with prohibiting Bicycle traffic signs.
Finally figured out and headed in the direction of Horsford.
The aim of the day was a rock Prekestolen.
We could not even imagine how it looks and even had plans of spending the night not her.
It would certainly aerobatics. 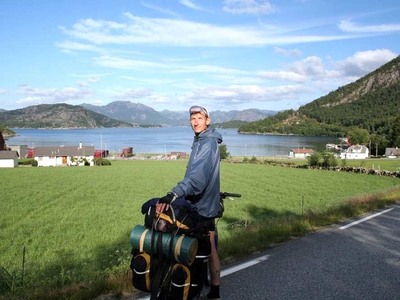 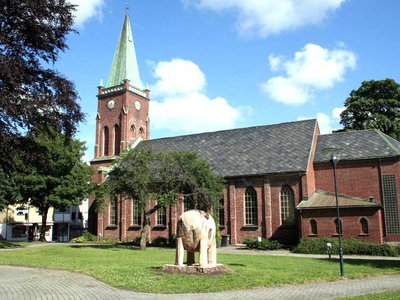 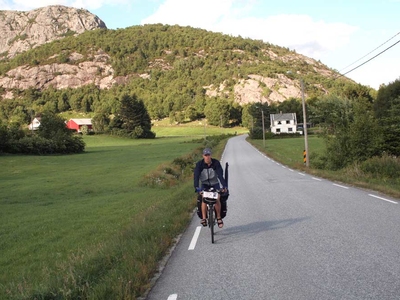 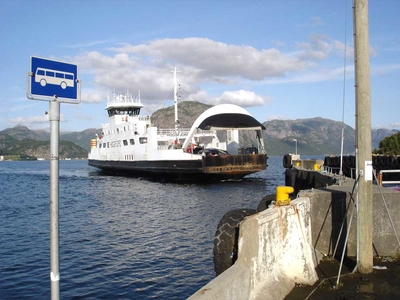 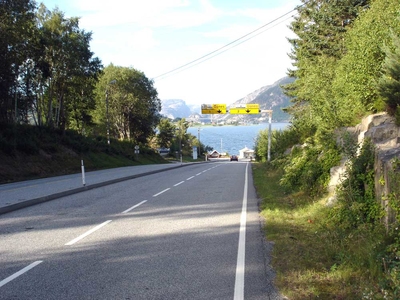 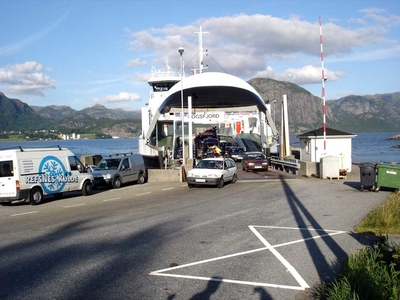 The path to the fjord, ran past two large lakes with beautiful shores and beaches.
They were full of people, good weather allowed.
The temperature was around 22 degrees and the ride was comfortable.

In the Take(Lauvik) ferry to Oanes (Oanes). The ship goes quite often. Norwegian ferries are paid.
Money inside goes to collect the little man with a portable cash register.
The price is reasonable - in this case the order of 50 CZK / person.

However, if a planirawati your way so that it will be many crossings, all of this will cost a pretty penny.
On the domestic Norwegian ferry no preferences cyclists.

From the ferry overlooking the entrance to the famous Lysefjord. And in the distance is visible the cable-stayed bridge across it.
Bridge Lysefjordbridge - traditional suspension bridge.
Opened in December 1997 Has a 640 m in length.
The main span is 446 m.
Distance to water from the roadway 50 meters.

In 1999 the bridge received the award "Butyful Road Award" from the office of Public Roads.
For the fact that the bridge blend in with the landscape and did not cause any big impact on the natural environment 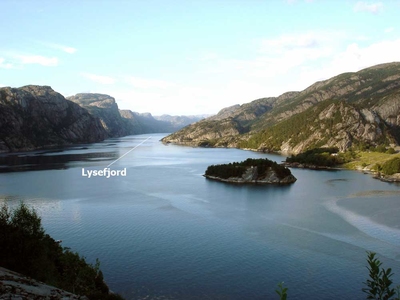 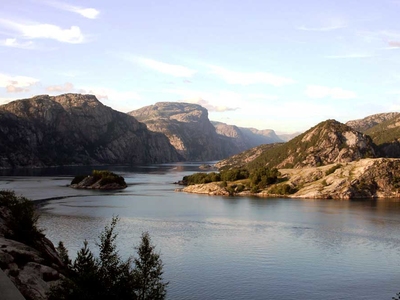 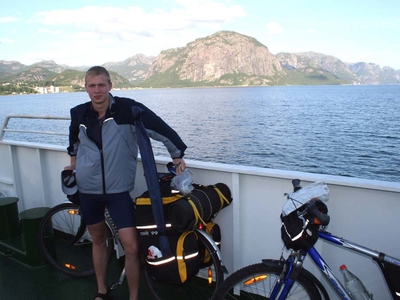 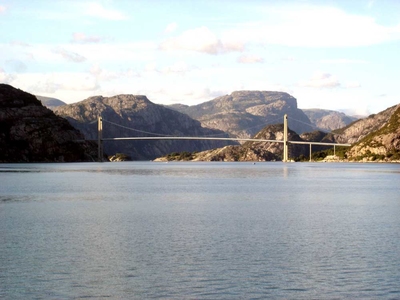 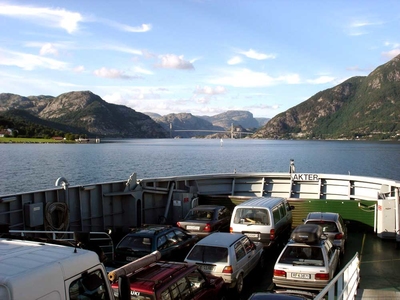 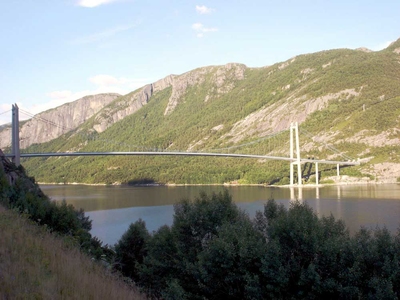 The Norwegians in this case is not fond of bridges across the fjords.
In each case, a differentiated approach so as not to disturb the harmony with nature.
However, apparently soon ferry across Horsford no longer needed.
Heard that Norway is the world's first can build in these places, fantastic highways, invented by Jules Verne a century ago.
We are talking about a road tunnel suspended under the water!
Will extend this facility across the Bay Horsford near the city of Stavanger.
The local engineers chose, though ambitious, but economical and attractive option: it is to lay the underground tunnel is too expensive, since the depth of the fjord reaches 155 m, and a trivial suspension bridge - according to the public - permanently would ruin a beautiful landscape.

As a result of huge concrete pipe with a length of 1.4 km will hang freely at the depth of 25 m due to the lift force filling her air.
However, the tunnel was demolished in the sea, it will be secured by steel cables with anchors or with a chain of pontoons, holding the weight of the whole edifice.

After the southern fjords here beauty some other plan.
More severe or something.
The soul dies from the vastness and abundance of water combined with the mountains.

When we got off the ferry in Obese the time was already eight o'clock.
In addition, it was discovered that our water reserves are running out.
Traffic on highway 13 has not detected any gas station.

And then we decided to try to ask for water in a private home.

Russia is also a country of forests, but over the past decade technology wooden domostroeniya was practically lost and not developed.
Soviet man was not put individual house.
All had to settle together in the same apartment building.
Otherwise as "containers for people" will not be called.
Now the situation changes a little, but not enough.

But our neighbors, the Scandinavians not sat in this area and raised wooden houses to a great height.
They build wonderful houses from logs and profiled and laminated veneer lumber.
A characteristic feature of these houses is the lack of pretentiousness, the severity of architectural decisions, functionality.
Inside, the space is equipped rationally, in this house the reign of clear straight lines, the interiors are all wooden, which allows a person to feel closer to nature.

Norwegian houses are usually red or white.
Are built usually by its technology - from the mast.
The house do not of round logs, and from the mast (polubrusa) using a typical "Norwegian" Cup.
On the logs produced longitudinal cuts for stress relief and education hidden cracks when drying logs.
But such construction technology is the most complex, time-consuming and requires higher qualification and remarkable craftsmanship of the carpenters.

Norwegian technology has a number of advantages.
Due to the abrasion of the side surfaces of logs somewhat larger volume of the interior.
Due to the fact that the carriage is made from logs of large diameter, in a log cabin getting wide mezhventsovogo overlap (average 14-15 cm) and a small number of grooves per unit height (3 crown of the mast give the increase of the wall about 1 meter), which significantly reduces heat loss.
Norwegian technology provides a tight connection of grooves and cups in the drying frame, which is extremely important for log structures (warmth and durability). 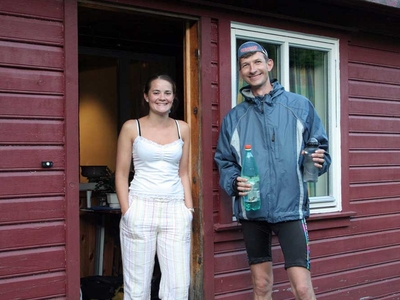 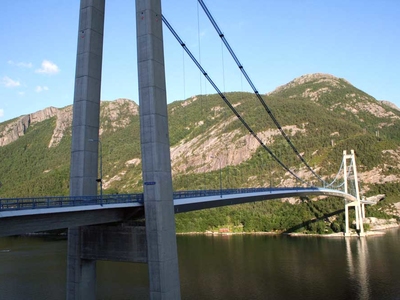 Chose the first house on the road and I, collecting all my English thoughts into a bundle, the doorbell rang.
Was opened by a young girl Eloise.
She refused, and filled the bottles while we were waiting at the door.
Particularly lengthy conversation we of course did not happen.
Of course, I looked inside to see how she lives.
Nothing excessive asceticism and rationality.
The complete lack of luxury.

In parting I asked her to take a picture with us.
Ilya is why it is always skeptical snorted when I asked all of our new friends on the photo.
Perhaps he thought I was too Intrusive and it's rude.
However no one is refused and the memory remained about people holding out a helping hand.

To get to Prekestolen should turn from route 13 in the area Hossana (Jossan).
Here begins a four-kilometer paved road to Preikestolhytta (Prekestolenhytta) - the place where there are hotels and Parking.
And where starts the Hiking trail to the rock.
Not to say that those four kilometers were easy. Constant and unceasing ascend.
Veins strain throughout the body. Sweat rolling barrage through the body.
Gritting his teeth, pedal turn after turn.
The main rhythm just won't stop . The danger of a relaxation on some of the climbs are obvious.

The setting sun gilded the tops of the trees and it seemed like suddenly we were in the fall.
With evening came the icy coolness and still had to wear jackets.

Int the long-awaited sign. We have a goal.
Assessing the situation, took the only right decision - to stay here for the night, and the next morning to do the ascent. 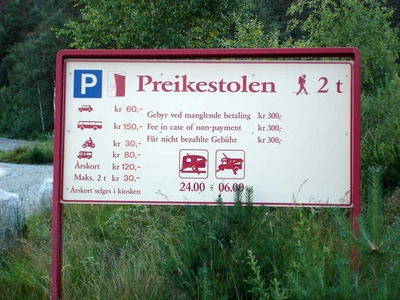 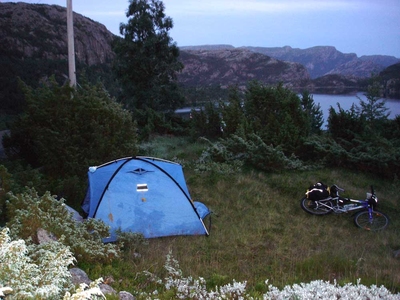 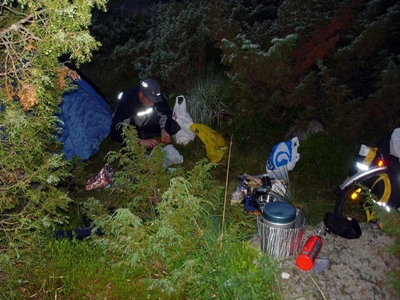 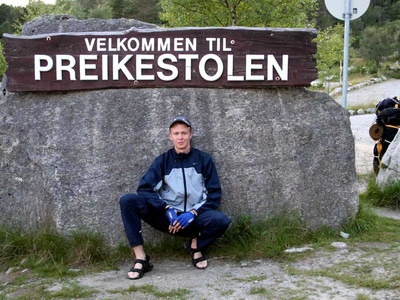 After wandering around, found a decent closed from prying eyes the place.
Put up a tent in the dark.
Tinkered with the food.
Suddenly nakrycia my vaunted "Primus".
The purchase of gasoline was not from butylki on the fuel line.
Resuscitation actions taken by flashlight, to anything did not lead.
Well we have had the second burner - gas.
Its in the future we used.

And Primus, as it turned out in St. Petersburg, clogged hose, at a cost of 800 R.
The cause is unknown.
Had to buy a new one. So not all that expensive - good quality.
◄ Prev
Next ►