Cycling / Norway.Naive.Super! / Damp as a habit

Damp as a habit 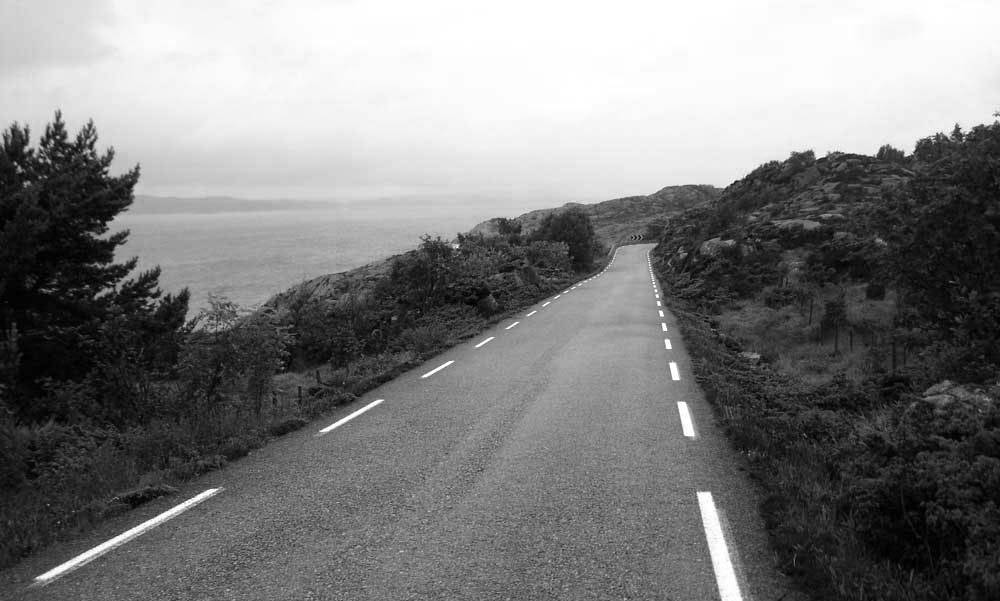 ...Again I see in my dreams the water.
Water everywhere — on me, in me and around it flows, is swollen, oozing everywhere.
I heard that dream about the water change, and every time you dream about water, I think, "damn. Again changes! Will it ever end?".... 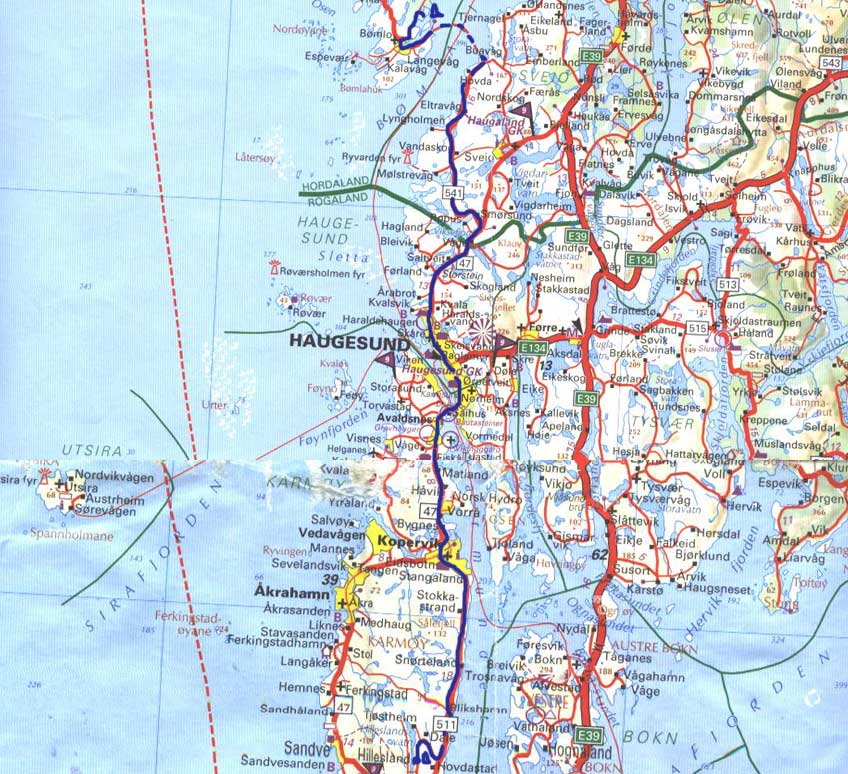 Late end late rise.
I awoke to the fact that somewhere nearby the sheep bleated and rattled the bell.
The fact that the tent we put on the edge of the pasture was clear yesterday.
The weather was not pleased.
The sky was covered by grey haze and the air was filled with a fine spray of moisture.

To get out of the tent not much liked.
But the road was waiting for us and we had no choice.
Leisurely had Breakfast and gathered.
Then lowered the bags and bikes on the road.
The high grass was soaked with water, and with wet feet did not want to go.
I immediately put on rain boots, and Ilya went down barefoot.
The island of Karmoy not too privetlivo met us.
The landscape here was exclusively agricultural.
The island is famous with white sand beaches, which is popular with surfers. In addition there are many peat deposits.
The entire center of the island is virtually uninhabited - there is a stretch of the Moors and swamps.
Settlements are located along the perimeter.

In one of them Kopervik (Kopervik) we soon stopped.
This is one of three towns on the island with a population of 6,000 people.
Long ago the king of Norway, Sverre First ordered to build on the promontory near Kopervik at the entrance to the harbour a wooden fortress. And now part of the city is called Treborg - a Wooden castle.
However, no trace of this castle has not been preserved.

Drizzle in the air gradually turned into a weak drizzle.
Breaking the jet of water , pulling CAPusey to podborodka we raced through Kopervik, stopping only on the bridge to take pictures. 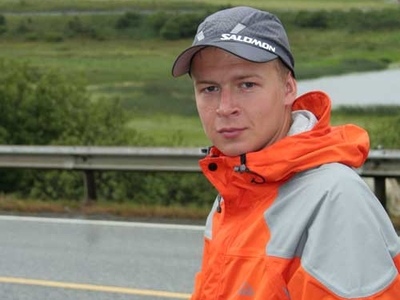 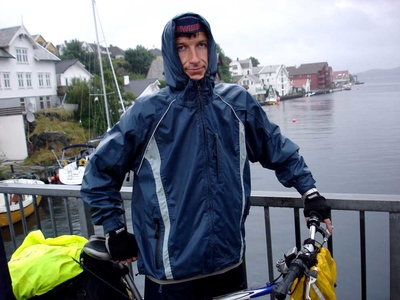 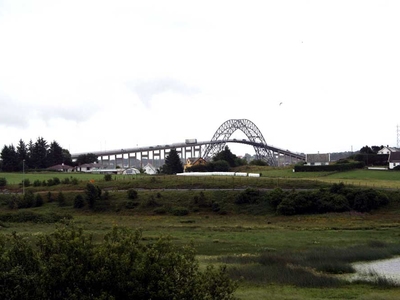 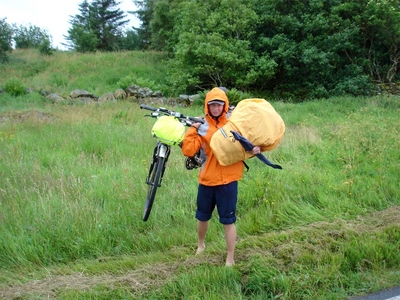 In weather like Ilya did not venture to get your expensive unit and it was my soap dish, which survived the night under the rain in Sweden.
She has really gone after digital zoom, but all other functions moisture is not affected.
Looking ahead to say that the zoom is not working for a year, recovered in Norway.
Right what is mystery.

Soon on the horizon a humpback silhouette of the bridge over the Strait of Karmsundet.

It was a famous Norwegian Karmsund bridge bridge was build in 1955 year, the place of the old small iron.
This bridge connects the island Karma with the city Haugesund which is the largest after Stavanger and Sandnes city of the region of Rogaland.

The length of the bridge is 690 meters.
The trick of it is that he arched structure with a span length of 184 meters and a height of the maximum point is 45 meters.
About the height of a 15 storey building.
A very large clearance allows you to pass under the bridge for larger ships. 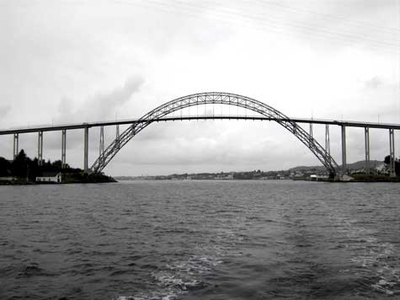 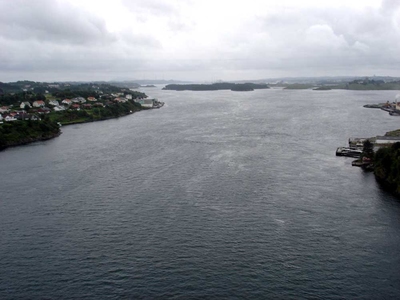 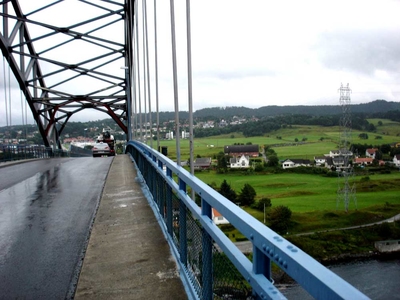 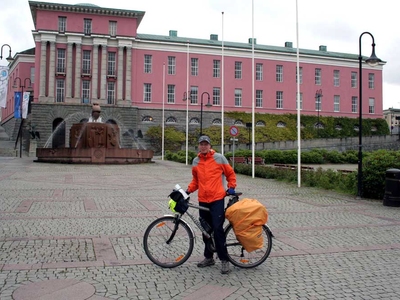 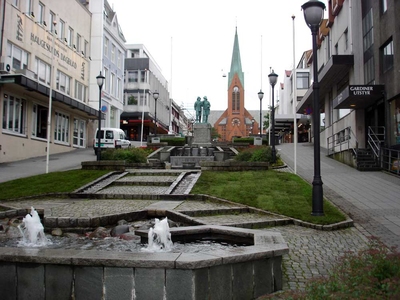 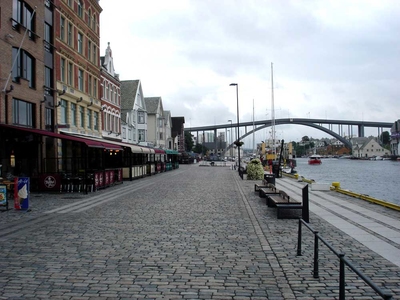 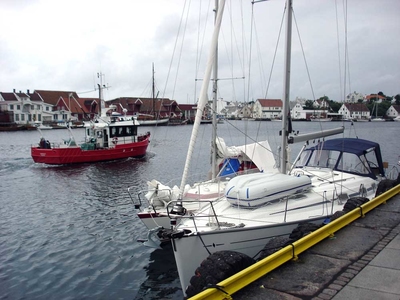 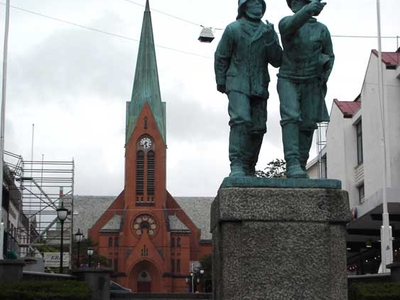 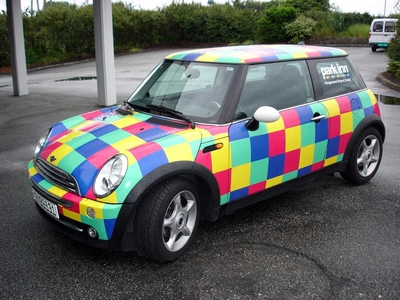 But to go on it, I tell you, the pleasure is below average.
I was really uneasy on his crest.
The bridge is very narrow, because we had the roadway to cross at the pedestrian trotuarchiki.
Its width was perhaps a meter.
And low parapet separating from the abyss.
First steep arc of the climb up.
At the top the wind and rain so strong that the bike is rocking from side to side.
And if to consider that fit my quite high and the edge of the parapet had about the level of the saddle, it becomes clear how frustrating it was to move there.
To be honest, I gave up and walked the most dangerous part.
But Ilya seems to have passed everything without Dismounting. However, I did not see - he was ahead of me.

Was removedAh the spirit at the base of the bridge, we drove to Haugesund.
First stopped at supermarkets to collect food and to warm up.
Feet were soaking wet. Overshoes, though helped a bit, but saved bad.
And Ilya and all were without socks.

Every trip to the grocery store turned into some kind of corrida.
Ilya wanted to participate in the selection of foods and often did not agree with my choice.
As well, and Vice versa.
For example, he always frantically protested against frozen fish.
Well if he fished a lot but it's not.
Even my buddy loved all sorts of sweets - biscuits, gingerbreads, etc.
His love for them knew no bounds. Whether the child ate.
And conversely, I was indifferent.
And so in many positions. Until we reached the compromise passed the time was all nerves.

There was a conglomerate of stores consolidated under one roof.
Huge area, with hundreds of firms a sea of products. Want to take a look not all, feel.
An hour and a half we wasted on this process.

In summer time in Norway spend the most popular festivals are: jazz and film festival of Norwegian films.
One of the main attractions is the open air Museum Dokken, illustrating the history and conditions of life of the peoples in this area from the 17th century to the present day.
Also nearby is the 5th largest waterfall in Norway Langfossen.

The city has a coastline with the North sea and very extended in length, however, from the stormy waters of the ocean it covers the island of Karmoy and the group of small Islands Rоvаr.
The rain had stopped and we proceeded to the Mall, sit down on a bench to drink Apple cider yogurt bought for 18 CZK - excessive waste.
The yogurt was so-so, like the cider with milk.
Then searched the Internet. On the spent in the library.
But the library that day worked until 15:00 and we flew.
Met on the road with the hairy Dutchman.
He also traveled to Norway on the bike, only instead of a backpack he had a fat wallet and he was just looking for some sort of hotel.

The city of course was very uncrowded.
And hardly the bad weather is to blame.
In General for a long time we did not stay there.

The next leg of the journey to the ferry to the island of Bomlo was overcome three hours.
A great but little-remembered road, which runs past picturesque lakes and partly along the seashore.
Ilya was photographed all sorts of animals in the face of local cattle grazing peacefully on the rich grass. 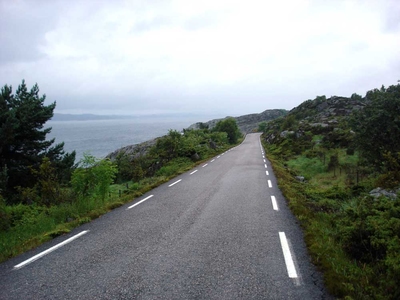 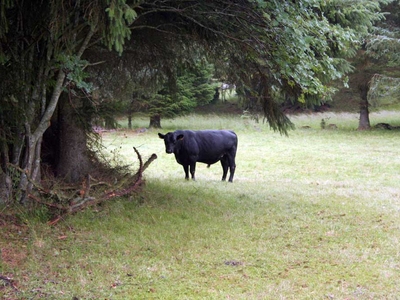 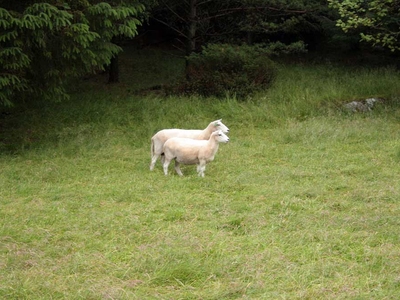 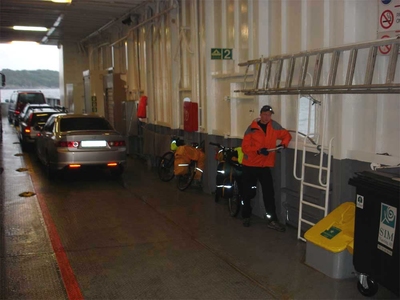 And then, as usual, escaped far ahead and approaching the crossing Buavag, I finished in splendid isolation.
And that something was a little tired, so pedaled slowly, enjoying the air and the surrounding landscape.
When the hill opened the view of the Marina, I saw Elijah furiously mahasabha hands.
Behind him the white community were puffing steam.
Well I am a man of intelligence immediately realized what was happening and put pressure on the pedals.
Already on Board Ilya colorfully told me a story illustrating the Norwegian attitude to the person.

He arrived ten minutes before me , to a point where everyone already sat down , cars have been delivered to the people on the shore were not
The ferryman, on seeing Elijah, politely came down from the deck and tried to plant it. But Ilya explained that with him another pretzel, and will be in 5 min.
The ferryman smiled and said that will have to wait.

"I waited 7-8 minutes, he didn't even look at me and I always picked up the mats in your address :)
After I explained to him that you will probably get lost and that I can no longer to detain them, he smiled and began to raise the ladder ...
he also said about the time of departure of the next ferry."

Ferry rode for about 10 meters from the shore and started to deploy the nose, when your humble servant deigned to appear on the horizon.
Well, after all it goes without saying.
The ferry returned to shore for me.
Again docked and lowered the ramp.
Something I was so uncomfortable from all of this.

The ferry to go did not want.
Behind its metal walls were raging element.
The wind hitting the water flows with rage.

We drove from the coast quite a bit and, seeing the front of the gas station, turned to her, hoping to wait out the worsening weather.
At the same time bought a gas cylinder remain at the end.
Tread around the store a bit, to no avail, the rain did not abate.
Very cold. Even on the street under a canopy of icy breath of the North made their way under our kutsie clothes.
The lumen is not the sky was not. It was getting dark and tarry no longer make sense.

On the map, somewhere close to Langeuage was supposed to be a beach, even two.
To find them we went ,however when we had to deviate from our route.
The first beach was so small that the tent would take perhaps all of its territory.
In addition, there were private houses and to become at night was uncomfortable.
Ilya of course persuaded me to make this decision, but I, relying on his intuition, suggested to look for second beach.
And lo and behold we made the right decision - the place was just heavenly.
A small Bay with a magnificent sandy beach.
Plus the indispensable infrastructure - a toilet, a table and a trash can.
Even in the rain here was very cozy.
With a sense of great relief in the rhythm of tango was given the tent, hidden things and cooked dinner.
The day was difficult and we fall asleep very tired, not representing more than haunt us, this cute area.
◄ Prev
Next ►