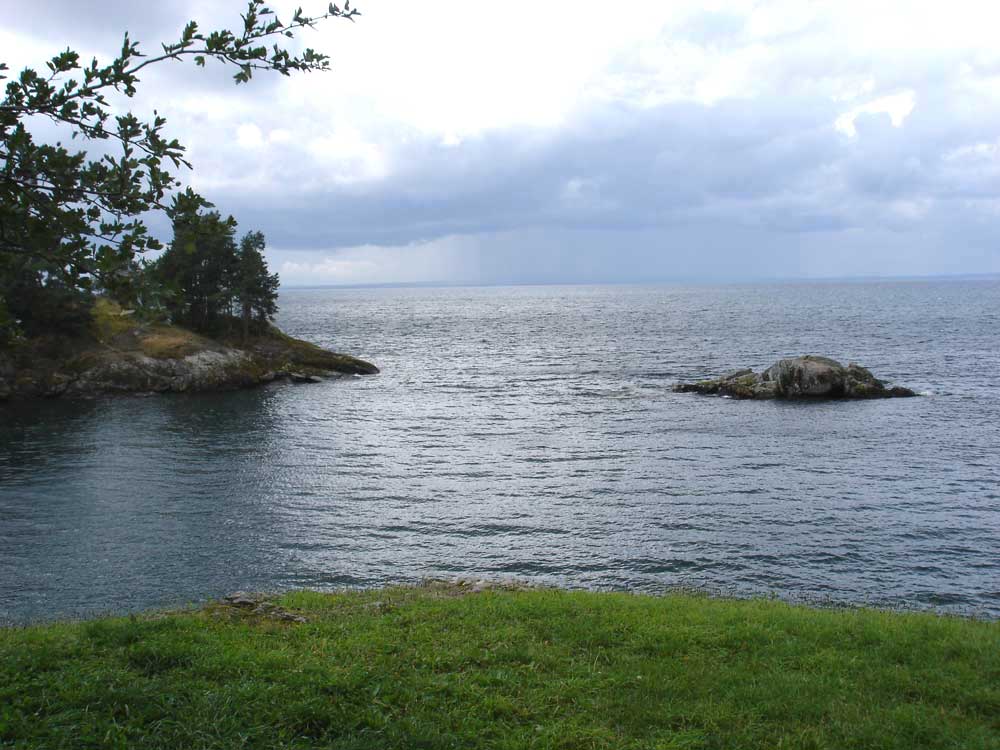 The morning was gloomy.
Was lucky that while collecting the belongings did not rain.
But he ran he had only to pull away.
The city of Vadstena was very close and we decided to stop there. 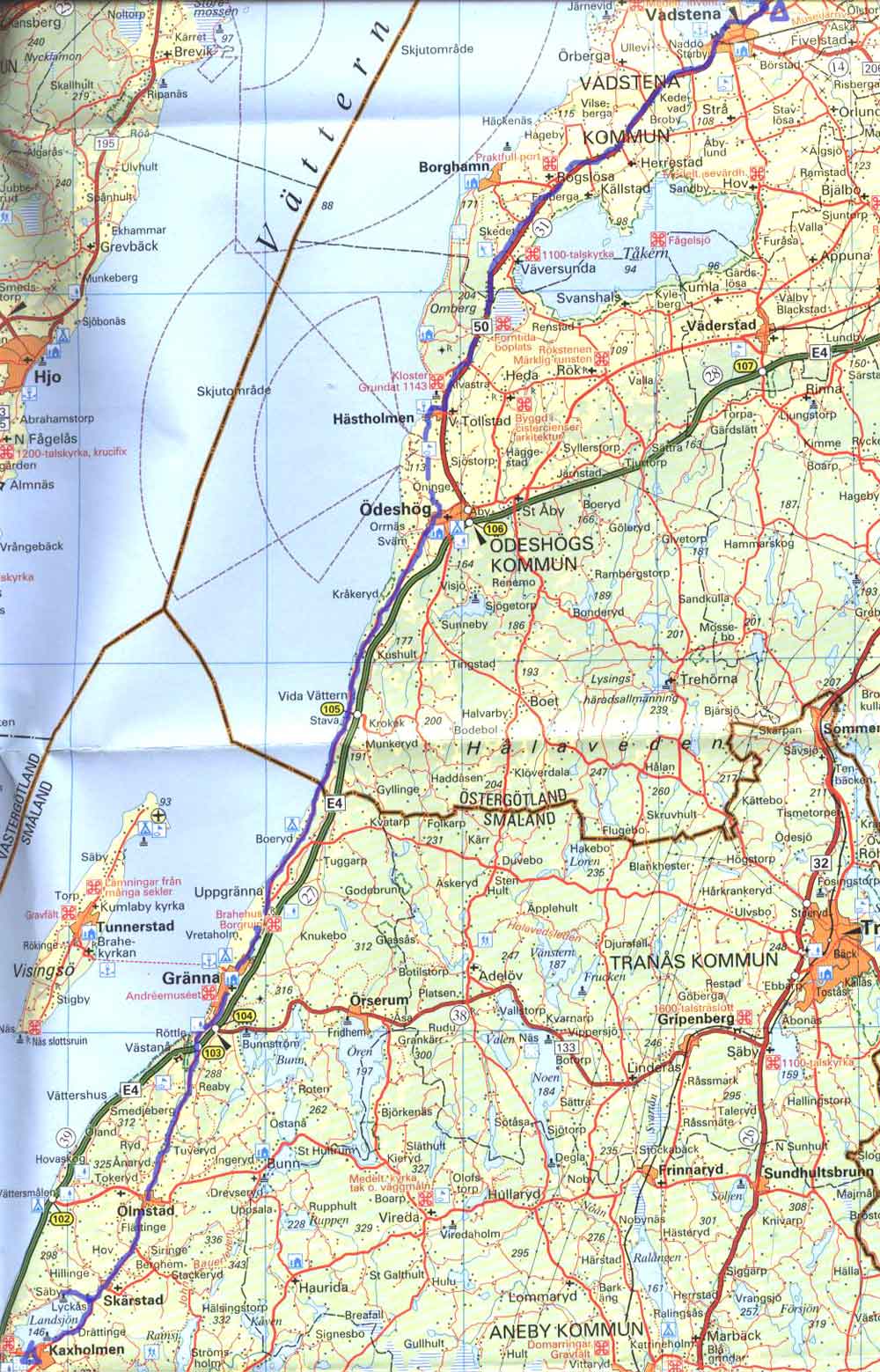 Sheltered under a canopy first filling, the first time took out his rain gear.
I IOC in previous campaigns. And it gives a not particularly pleasant feeling.
And because the purchased in addition to waterproof jackets and even pants.
And the backpack cover from the Peak.
Looking ahead to say that he is well-proven.
Things always been dry.
On the feet were worn velomobile.
The cyclists turned into cocoons on wheels.
But such suits from rain allowed quite comfortable to drive in any nasty weather. 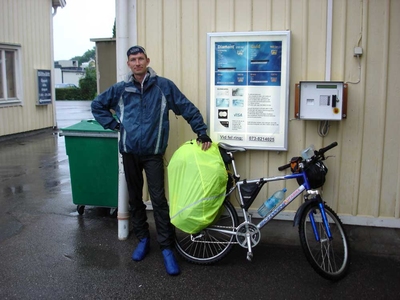 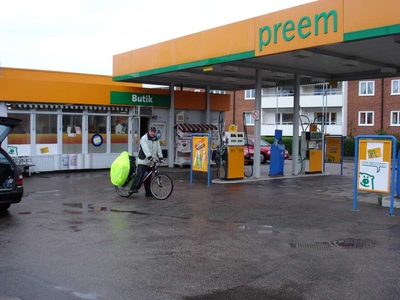 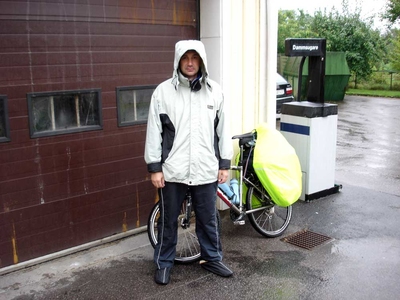 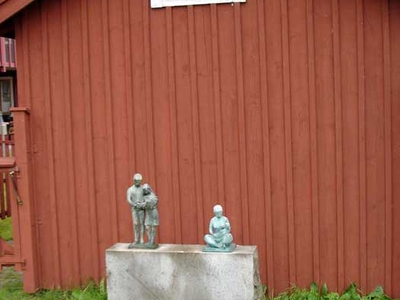 While we were equipped in a similar way, and also visited the local outhouse, to warm my hands in hot water, the rain gradually subsided.
Toilet by the way was weird.
With some automation. So we end up not calling her.
The first came Dima. After some (I will not specify) while he went and the door slammed.
My attempts to re-open was not successful.
While we thought hesitated nearby, walked past a man and without stopping went in the toilet!
Then he went out, the door slammed shut again.
I again pulled - locked.
Threw it out the window.
But to ask people how to open the toilet was bizarre.
And because, in spite of this bad idea, we decided to visit the town centre.

And there was something to see.
One of the oldest medieval castles of Sweden were located there.
It was built in 1545 by king Gustav Vasa as a fortress to protect Stockholm from NAPadenia with the southern borders. 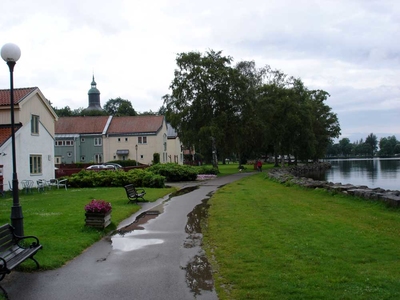 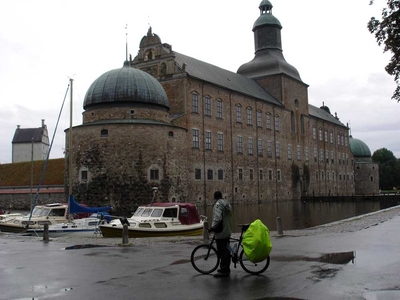 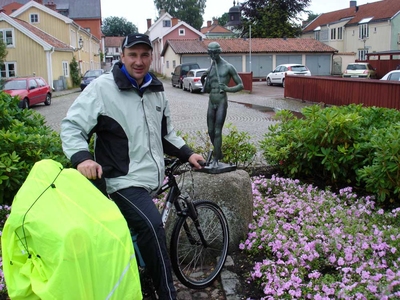 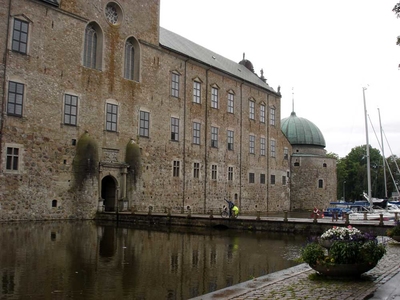 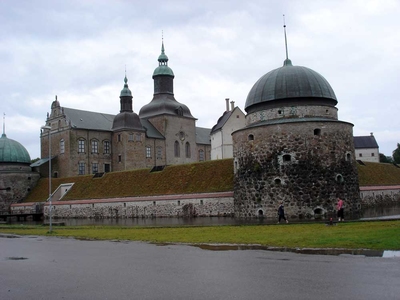 In the castle everything was as it should be for fortress towers for cannons, a moat and ramparts.
In 1552, VAS married in this castle to his third wife Katarina Stenbock, and now one of the halls is called the Wedding.
The castle was fully completed only by 1620 and he kept the status Korolevskogo until 1716.
Then the Royal family lost interest in him and he was used as a granary.

Now in the castle Museum. And in his yard constantly pass all sorts of concerts.
We can see how workers assemble up a huge stage.

In General, Vadstena was a pleasant town with a lovely promenade along the shores of lake Vättern(Vattern).
It is especially good to observe the vast waters of the lake-sea.

It is the second largest lake in Sweden.
The deepest point located in the South of the island of Visingso, is 128 meters.
The average depth is 40 meters.
The whole lake perimeter is approximately 642 km.

Name Vattern is derived from "vatten", the Swedish word meaning - water.
But as is usually the case this is soprim the moment and probably serves as a ground for writing all kinds of dissertations.

Lake savitsa the excellent quality of its transparent water.
Many cities in the region receive their drinking water directly from Vattern.
In principle, you can safely drink it raw. Intestinal disorder is unlikely.
I wonder where the city's waste water on the shore.

And Vattern is the annual regional bike race Vatternrundan, each time attracting approximately 15,000 participants, making the 300-kilometer trip around the shores of the lake.

In the lake allowed for fishing to anyone.
And it is here found in large quantities.
After all, if carefully treat the natural resources, kato do it in Sweden, they will last all for a long time. 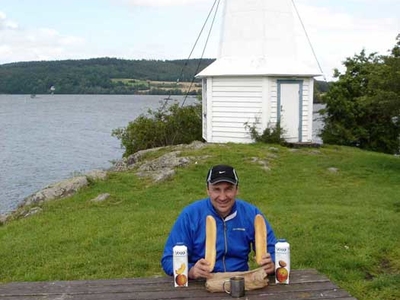 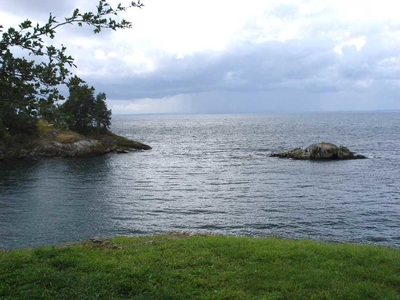 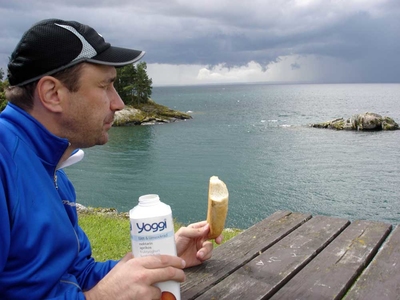 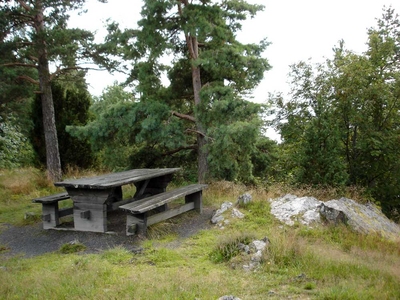 In the town of Hanstholmen(Hanstholmen), it was decided to stay for dinner.
And gum purchased in Vadstena buns with yogurt.
Near the lighthouse for us specifically was delivered to the table.
From the hill the lake was in full view.
On the horizon were black clouds and flash of lightning.
Photos cannot, unfortunately, send lightning situation worthy of the brush of Hieronymus Bosch.

Muffin had got in the rhythm of tango.
We barely managed to shelter under a canopy as it rained heavily.

From Hanstholmen to the city of Odeshog (Odeshog) is a dirt bike path.
Strong headwind turned linking these towns 7 km 27.
Every meter was hard. And from afar the spires of Otesaga some unattainable Mirage in the desert.

For Odusoga the route goes along the elevated rocky wooded shore of the lake.
Sometimes there are places of rest and observation platforms.
One of which we also took advantage of.

Dima: On the motion along the trails need to be discussed separately, very remember that even trucks are not emitting almost no exhaust, and not poison the environment, was struck by the friendliness of local drivers, their patient drive with the speed of the bike behind you, in cases where it was not possible to overtake on a narrow road, at the same time, in our address sounded tons three-story Mat, to which we are accustomed, in such cases, at home.

On this day we tasted the delights of Scandinavian changeable weather, when you first go in full gear in the rain, an hour in a t-shirt under the scorching sun, two hours later again in the rain and wind, then sun and so several times a day.

During a visit to the shops Igor always took the local press and though I don't know anything svetski carefully watched the weather forecasts, dElias with me by the predictions of weather forecasters.
Freestuff amazing these guys work (meaning local forecasters) it is possible to predict any weather, even the heat, though the pouring rain and it will definitely happen – such a variable in the Scandinavian weather.
But this is only my observation, and Igor consistently in looking at it, showing extraordinary respect for this noble profession.

The ruins of the castle Brahehus(Brahehus) located on a mountain ridge unwittingly a sight to behold.
This castle belonged in ancient times to count Per Brahe (Per Brahe).
Cunning count knew where to build a home.
The top offers a fantastic view of the lake and its surroundings.
Clearly visible is the only large island on the lake - Visingso.
And the castle like the eyrie is perched on the slope.

Count Per Brahe, the Swedish statesman, belonged to a Swedish noble family Brahe, the grandson of the Pen Senior, one of the leaders and ideologists of the reactionary aristocratic oligarchy.
The Governor-General of Finland in 1637-1640 and 1648-1654, where he improved the Swedish control and became known as the great transformer of the country.
He advocated the development of education, and it is thanks to him in Turku was founded Finland's oldest University and Academy of Sciences.
For the development of trade he has founded new cities, including Hamina, Savonlinna, hämeenlinna, Lappeenranta.

Just up the road was a stand with booklets telling what the legend associated with the castle and its destruction.
To read was long and the only thing I understand it's a shershe lya FAM.
To blame some woman or a wife, or a mistress.
In General, everything is as old as the world. 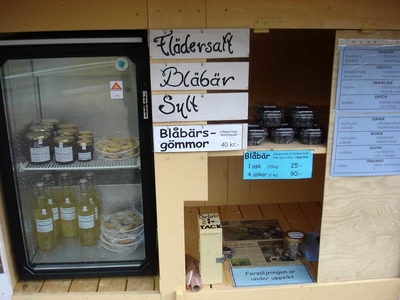 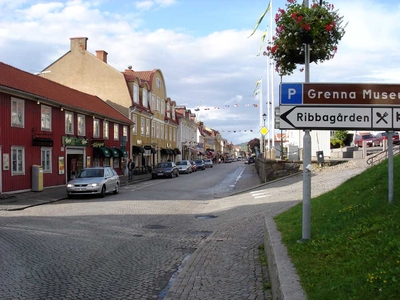 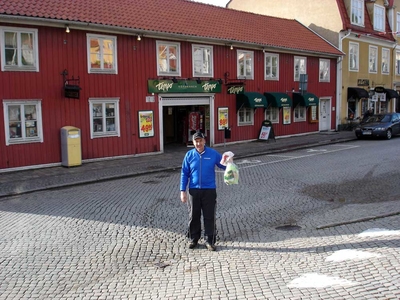 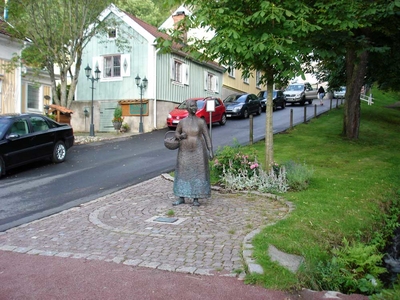 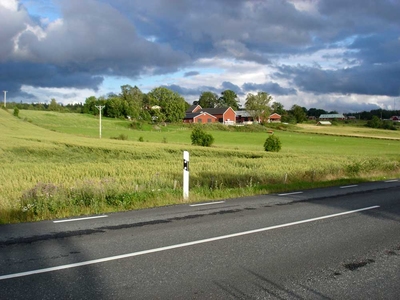 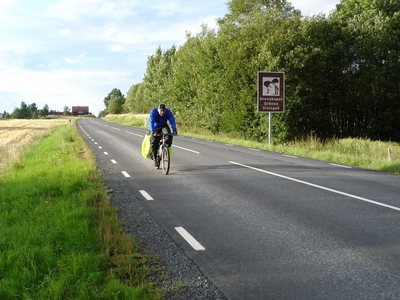 I saw from afar.
Wooden Cabinet with glass doors standing almost on the road.
Upon closer examination, he would be plunged into indescribable thrill for any Russian.
For EXTdry lay whom not guarded and FREE.
Juicy large size with cherries blueberries in plastic containers.
Blueberry cakes and jars of honey.
Of course all this cost money, as clearly read the price tags.
A little apart stood a jar with a slot for coins.
It was a booth of self-service!
Tell me, hand on heart, how many would lay a set somewhere in Russia.
But there was still a small refrigerator.
Here's Swedish communism in action.
Which means not each according to his needs, but rather from each according to conscience.

Subsequently, similar to the booth we met many times.
Especially in small villages where they sold fresh vegetables.
And if pies and blueberries we did not take (this blueberries on the way to the forest we've eaten a lot), the cucumbers and the potatoes on the ridiculous, even by Russian standards, prices bought with pleasure.
The magazine pouch as necessary. Weighed by spring balance and throw coins in the box.
Don't know how Dima, but this made me almost the strongest impression of the whole trip.
It's such a reified form of trust to you .
No matter who you are the traveler and where, but a priori implies that you're HONEST.
And it kind of gives you a fantastic feeling that you are a NORMAL person.

Trust is something which is lacking to us in Russia.
Where much if not all built on deception, each every.
The power of deceiving the people. The people don't trust government.
The circle is closed.
As it turns out painful to live in a world of total unbelief and deception.
And we don't notice because I used to live.
Feel it can only be on one of these examples.

With such thoughts, mechanically rotating the pedals, I noticed as we entered Granna(Granna)
First found the store to replenish food stocks.
This time my friend went for the kill in ODInight while I guarded our bikes.
An abiding sense of caution.

Dima, as always, could not resist and have bought carbonated sugar water.
He absolutely could not drink plain water.
Why is it all of the time needed gas, the bubbles tickling his nose.
The taste and color really have no friends.
This time, instead of Pepsi Cola was an impressive bottle of Apple cider - the only one (except Beers) alcoholic beverage sold in grocery stores in Sweden.
Had to keep him company.
The more to fuel his powerful body Dima picked up the apricot pie.

After eating a little happier.
It was late afternoon and wanted to cover their wheels a couple of tens of kilometers.
It is a pity that after a Facet road which you can ride a bike, moving away from the lake shore.
And the Bank paved highway.
I don't understand what's the logic.
How could do the Swedes famous for its fixation on the environment!
What can be seen from the car window driving at speeds over 100 km/h!

But there was nothing and after half an hour we came to a small lake Landson.
According to the map there were already two near the beach.
Someone pulled my tail and I go far, believing that, away from the road will be better.
However, this beach was out of our reach.
To get to it we had to climb over the wire under current, which serves as a fence for cattle grazing.

There was of course the special ladder, but that it is possible to drag all our Luggage did not want.
I had to go back.
The second beach was next to the road and a large football field.
Right on the back of a large shed for storage of equipment or some other equipment.
It was getting dark and had no choice.

Dima: we spent the Night on the beach near the football stadium that isanother is to effectively noticed important components of the local way of life, where some small settlements were as smart of a football field, covered with a beautiful green lawn grass, lovely.
◄ Prev
Next ►