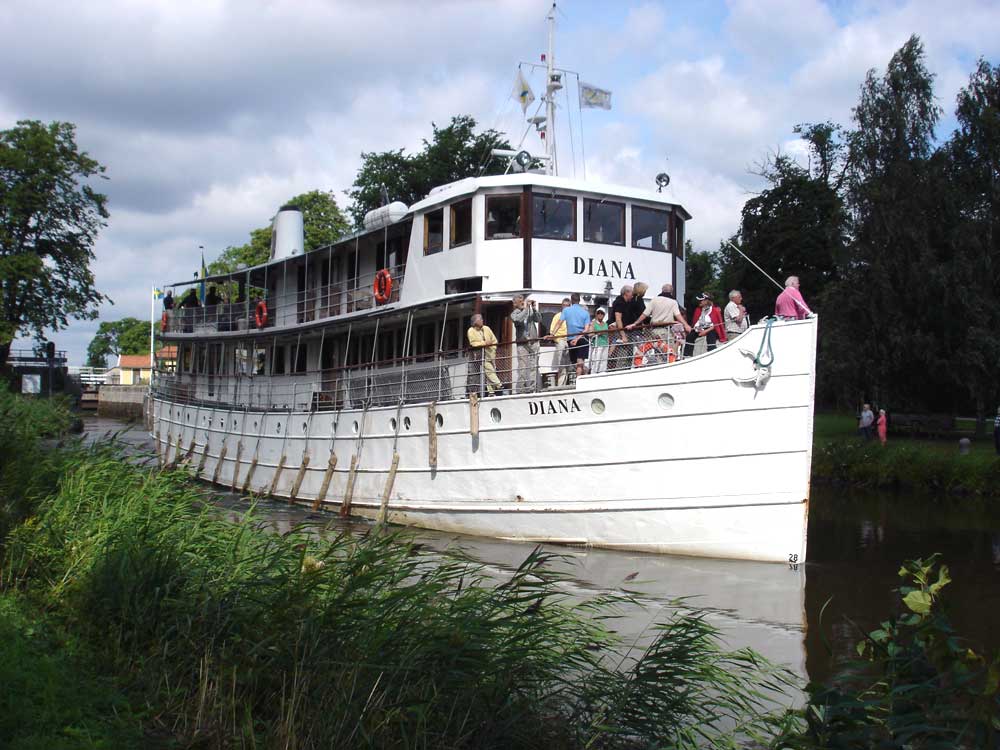 Dima: As always an early rise, Breakfast and taxes.
It was already a daily ritual, waking up always at 6: 30 o'clock, the cries of the rooster on the clock, Igor, in the morning it seems to be not lost, but, nevertheless, the Breakfast and the charges were gone for 2 hours, despite the fact that all the responsibilities were clearly divided, and the discipline and clarity with which we smoothly washed, prepared, collected a tent and things and gave me a certain moral contentment and gave it a good charge for the whole day.
For me personally, morning gathering of the backpack was even some important ritual duties akin to cinematic heroes before the deed, well, you probably remember the stores of ammunition in the chest pockets of the vest, guns, armpit, etc.

Taking leave of his hospitable stone we headed West along the canal.
The path was near the shore and we were able to compete in speed with passing yachts.
Our speed was slightly higher and even not especially straining, our bikes were ahead of the mariners.

At the Gota canal now used as cheap cruises.
The cost of a week sailing starts from $ 1,000.
For these purposes, it was restored and rebuilt three old double deck of the ship.
From the outside they look like a hundred years ago. Well, inside of course all modern.
In some places where the channel is particularly narrow these boats are barely touching the sides of the banks.
Manage probably also an art. 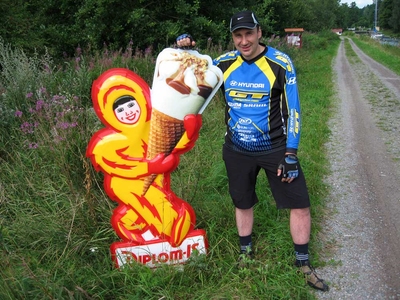 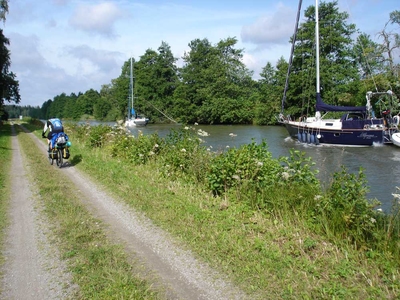 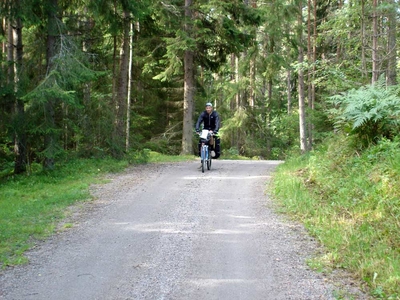 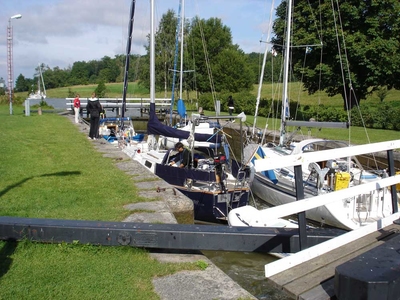 Particularly impressive they look a little distance, when it is not visible from the water on which the ship sails.
And see only his deck.
And it seems solid extravaganza. Around the fields and grass. And in the midst of them quietly moving the ship.
An amazing sight.

Withonce the Söderköping, where the Gota canal crosses the busy highway for the passage of vessels used drawbridge.
In the course of the canal bridge quite a lot.
There are even fully automatic.
It is interesting to observe how the approach of the yacht fire sensors, car rings a warning bell, lowered gates and shutters of divorce letting go bridge boats.
And apparently the court then take on the role trains have priority of movement.
Cars are forced to wait.
And if in the case of road having low traffic is the best solution for the motorway channel clear obstacle. 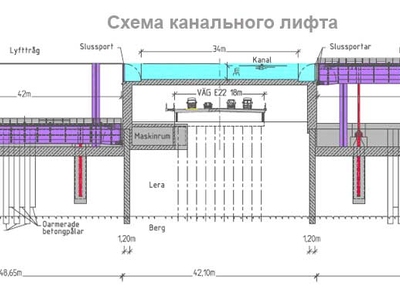 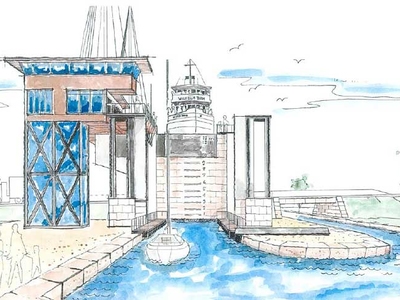 But the Swedish craftsmen are going to solve the problem in an original way.
There are plans to create a lift on the highway.
With a vertical sluice and hydraulic lifts, vehicles may go over the road and through the chute pass over it.
The second lift is again down court to land ( or rather water). 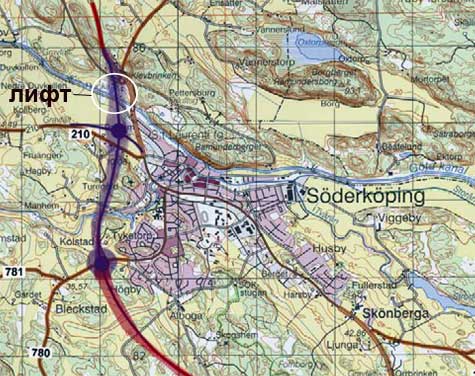 It seems like there are somewhere in Canada.
And not only solves the problem of isolation movements, but also serves as a great attraction for tourists.

Dima: In a day for an adult we ate three times at Breakfast and dinner we ate mainly porridge, anything meat or fish, cheese, chocolate, etc., lunch consisted of milk, kefir or yogurt and some muffins, while in the course of the movement was even snacks, candies, chocolates and any little thing.
So, my mistake was that in the course of a running day, I almost did not use proteins when the error was corrected, everything went much more fun and such situations did not recur.
Igor used to do this, even the term "peculiarities of metabolism".

Soon the man-made part of the canal ran into lake Roxen.
And my light came up with the idea to go round it from the North.
On the map came out shorter and the track was not the main.
Dima, as always, expressed doubt of the practicability of such a step.
He felt drawn to the big cities and wild nature as something he disliked.
However, the rights of the leader of the expedition I was able to insist on.

As a result, we got a wonderful couple of hours of riding on different terrain.
Sometimes even lost direction.
I'm not talking about gps neizpratni something said earlier by chance?:)

A detour North of lake Roxen lay through a dense forest.
Periodically there were signs with the route, but they were located as randomly and several times leads to a dead end.
I even began to doubt that the Swedes really are too meticulous in the field areas.
But perhaps then these pointers set a long time ago and stopped to watch.
Still the place was not so crowded.
Dima gyrate her deep intelligent eyes and quietly cursed in a whisper.
But patiently went after it.

But as they say who seeks will always find.
Curve and led us straight to the next piece of the channel at the outlet of the lake. 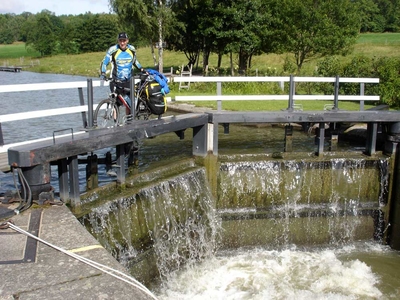 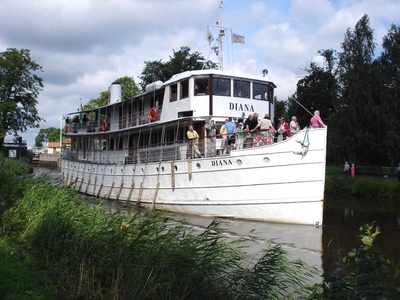 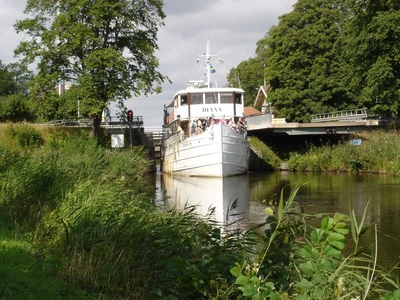 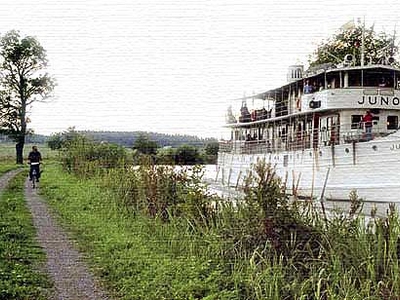 Earlier I had planned to stop at Motala is situated on the shore of lake Vättern.
But losing a lot of time in the woods had to cut the route.
Lake Boren traveled from the South and rushed to Vadstena.

Dima: In the afternoon, took a little piece of the Iota channel, saying goodbye to him, I experienced even some sadness, but we waited way to Mottale, which we reached by taking a shorter road.
On this day I noticed another feature of Sweden that even some relatively large towns lacked grocery stores, it was weird, because we have, in each village a small grocery shop or a stall is required to have.

Along the way with sadness and watched in amazement as a local harvester rye.
Supersymmetrythe modern unit leaves fine chopped straw and nothing more. Spiral moves quickly from midfield toward the edges.
The grain was apparently stored inside the processor because there are no truck in which it would have rained.
Therefore the loss is zero.
He showed himself a connoisseur of agricultural equipment, recognizing in this miracle American car.
And even the approximate cost of called.

That however did not prevent him own technique because of ignorance constantly to put my hands.
It is why it is constantly broken shifters.
Another adjustment we made right at the gates of the castle Stjarnorp comfort of clipped grassy lawn.
The castle led a beautiful alley planted with the sides of old trees.
The mansion apparently was privately owned.
But according to the laws of Sweden to the monuments, had the right of access to all people.
And the owners had to put up with curious.
However the crowds of onlookers there was not observed because of the insignificance of the castle and its remoteness from the main tourist routes. 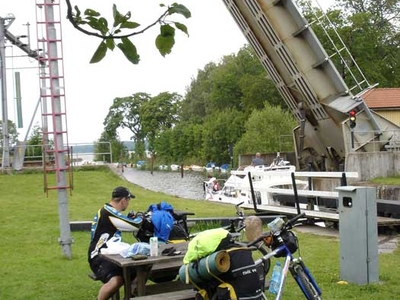 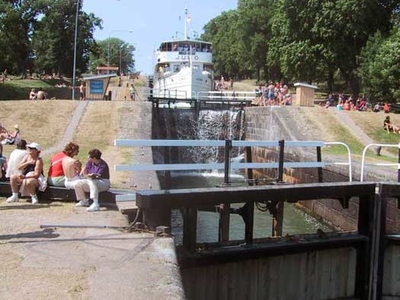 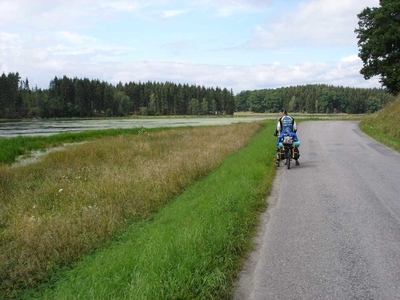 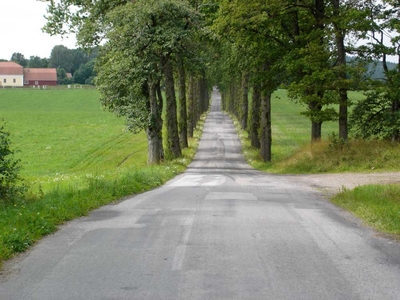 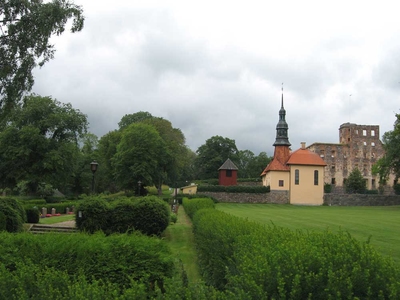 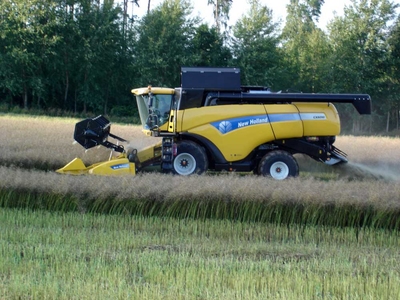 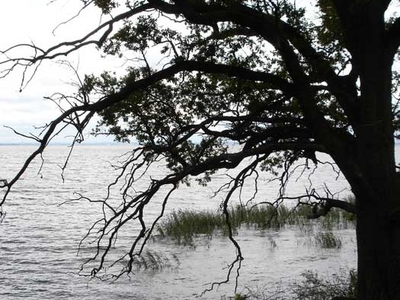 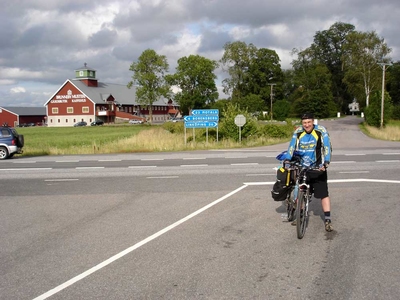 On the road a few times the rain started.
And we wore jackets, then shot them.
Dima periodically tormented by cell phone, calling home.
He purchased before the campaign what is the Estonian simcard and calls from Sweden were very cheap.

Near Vadstena on lake Vättern there is a huge campground.
With a developed infrastructure.
And as always here it is its territory was the only available place to the water.
We poked it beyond.
But it was all swamped and drive not something that is impossible to put the tent.
But our star has not yet waned and I managed to find a small clearing right outside the fence of the campsite.
The place was just perfect.

Just amazing what they are still zachopouloushnye these Swedes.
The campground was Packed to capacity and sometimes resembled a Gypsy camp.
Vans standing rows of tents all over the place right next to each other.
Someone cooks on the grill BBQ.
Someone hung out to dry linen.
Kids running around and screaming as best I can.
Hubbub and bustle. 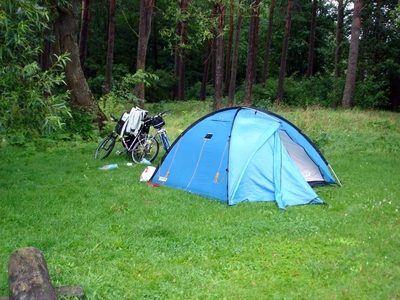 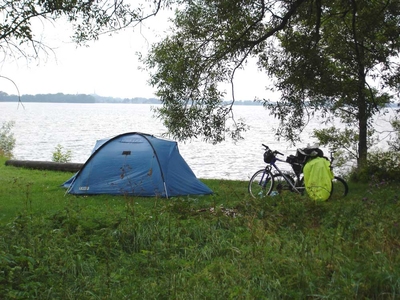 And five meters net free glade. The truth behind a fence.
Well, we had no complexes about it and took it themselves.
To heighten the decency to put a tent in the twilight, not to tease the public.
Although I think without that, hardly anyone said anything to us.
Education is not something you know.
◄ Prev
Next ►