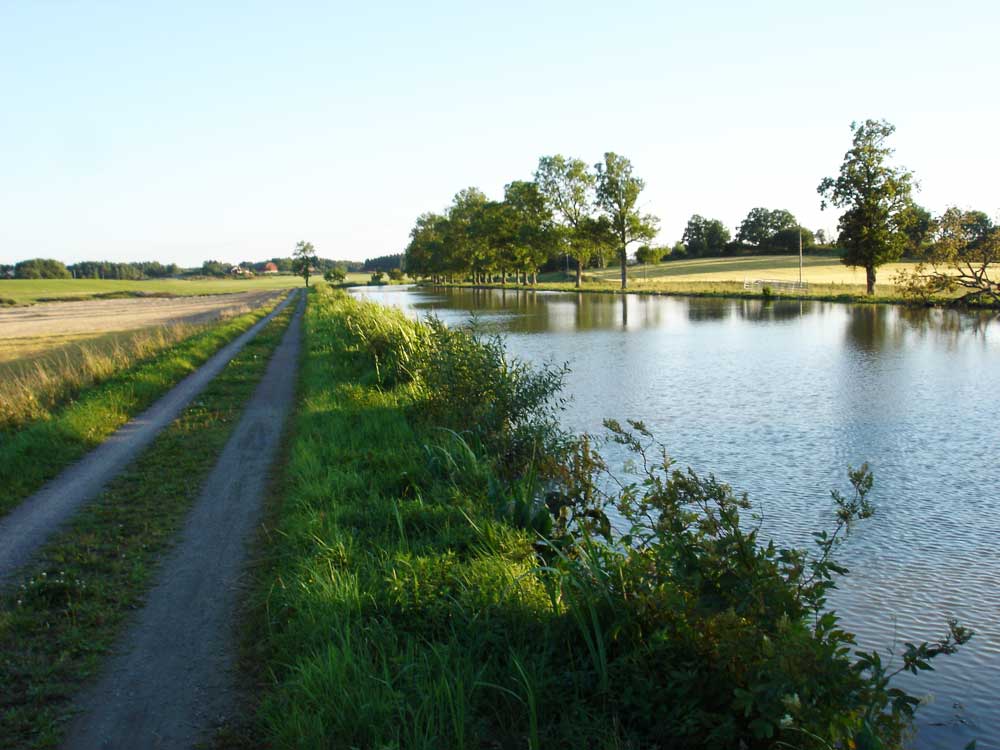 Lower pleasant chores of gathering our belongings and viability of the organisms colloquially referred to as the Breakfast and toilet.
I read a lot of literature in my life and noticed that almost nowhere authors are not affected intimate aspects of human existence related to the administration of natural needs.
Characters of the novels live, talk, do some things and not very good and while he might not go to the closet.
Perhaps it is an unwritten rule followed by all more or less known writers.
Maybe a still process may damage the romantic spirit and heroic nature of the characters.
Probably only Rabelais in his grotesque pamflete of Gargantua and Pantagruel drew attention to this is not the most clean side of human existence.

But the report about the campaign not a pamphlet, and because I obviously need to write two courageous guy who had spent the night on thin mats that barely opened his eyes, immediately set off, riding dukelskych horses.
Their muscular torsos, playing with the muscles gently in the breeze, to blend in with its landscape consisting of mighty pines and oaks.

And never mind that actually, creaking joints, tired travelers, barely moving his feet, slowly began the second day of his journey.
All important content, not form:)

The East coast of Sweden is very well maintained.
Here a series of little towns gives way to the ideal paths through the woods and fields.
Sometimes all guttaperchivye so that it seems that you're inside a child celluloid toy.
The real world is simply not able to be so right. 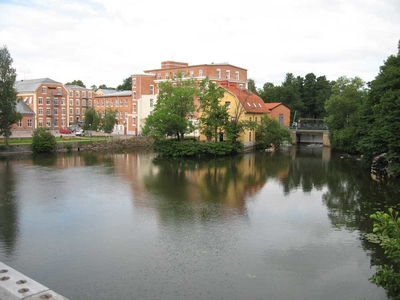 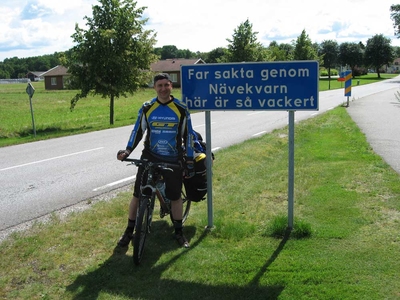 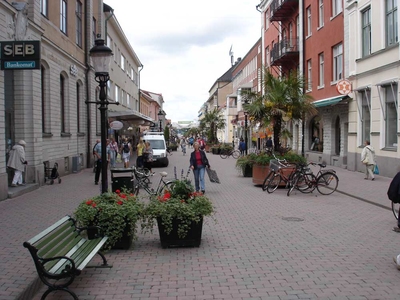 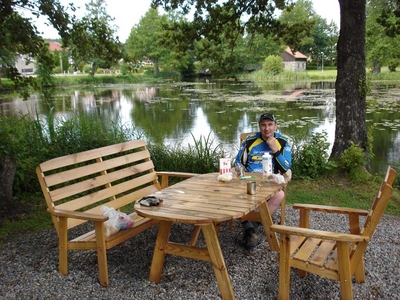 In this world of mushrooms and berries do not grow nicely along the roads, and broken and eaten before he could evolve and fillXia juices.
In the real world your legs and back are constantly in dirt and dust from passing cars.
In this world there are no smooth lines and debris lies everywhere, and not in urns.
But was not in the real world and in Sweden.
Where probably only changeable weather sometimes reminds you that you're still on Earth. 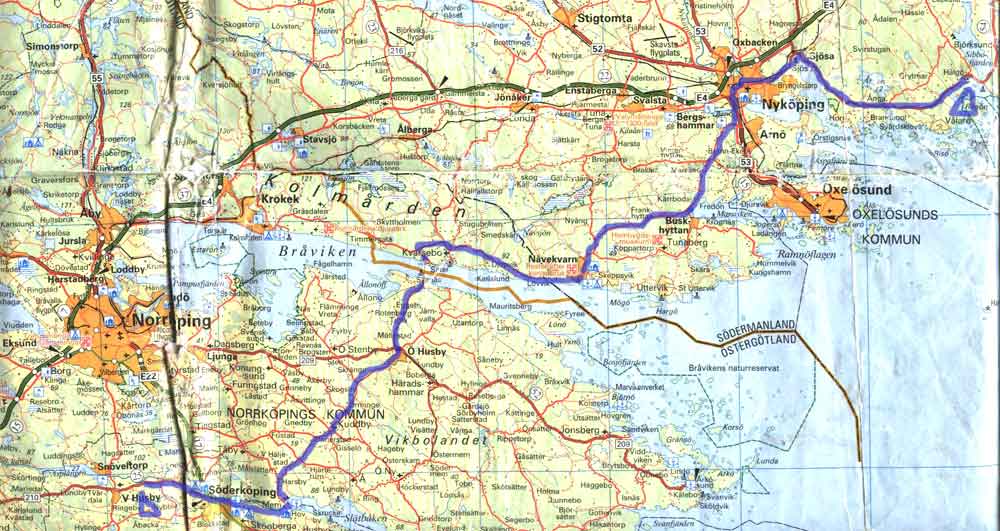 In Navekvarn weather was quite wonderful.
The clouds almost cleared and there was nothing we measured to eat, sitting on the shore of a small pond in the back of a grocery store.
Cycling consists of several enjoyable moments - one of which is undoubtedly lunchtime.

Dima: This day was difficult for me, the euphoria associated with the arrival and the beginning of the hike was to go ahead was a difficult and long journey, you had to adapt to riding with a heavy backpack, which the stability of the bike was extremely low, especially when descending from the mountains. 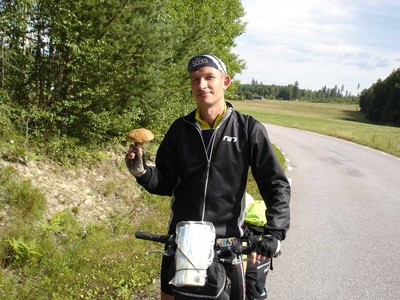 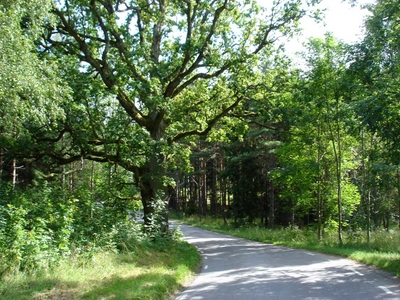 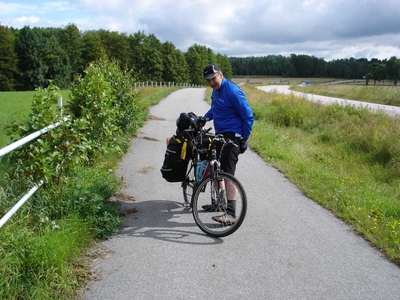 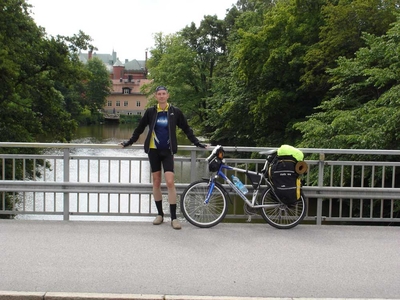 Dima admitted afterwards that the first few days he did not perceive surrounding nature because they were entirely focused on their physical sensations.
And only then after five days started to look around.
The body can get used to constant stress and never bothered to enjoy the Scandinavian reality.

Wonderful place. A fantastic air which is impossible to breathe. Pine forest on the shore of the Gulf of Braviken.
Now a resort town. In good weather, is not worse than the South of Crimea.
Slabosolenym sea and beautiful beaches.
For lovers of diving off the rocks here too expanse.

But taking a ferry to the other side of the Gulf see as a dramatically changing nature.
Becomes more plain and steppe.
Rare small villages. Well-kept and deserted.
And mesh roads, then asphalt, then dirt, fled in different directions.r /> But the orientation is no problem, because at each fork signposted.
Paper map mounted on the handlebars more than replaced all new-fangled gps receivers.
Height is gained gradually and imperceptibly.

Downstairs broke the water surface of the Gulf of Clambake.
Here, near a place called Meme (Mem) originates or opposite end, depends on which side of it to vplyt, the famous Swedish Gota canal.
It passes through Central Sweden from the shores of the Atlantic to the Baltic sea.

Gotha canal (Gota canal) is the largest construction project of Sweden for all time.
He was laid (particularly in very hard rocky soil) in 1810 – 1832.
Had to dig a bit because the project successfully used the lakes and rivers.
The main work was carried out manually, using ordinary shovels.
The construction lasted 22 years, and 26 September 1832 in the presence of king Karl XIV the opening of the channel.
The result is a system oklolo length of 600 kilometers. 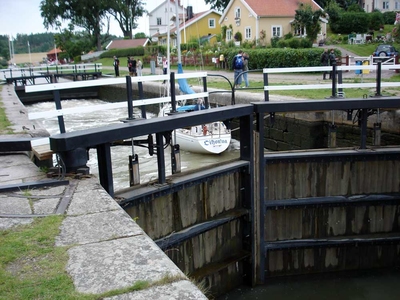 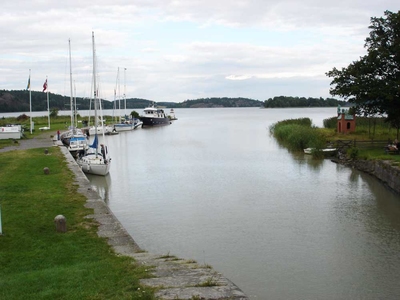 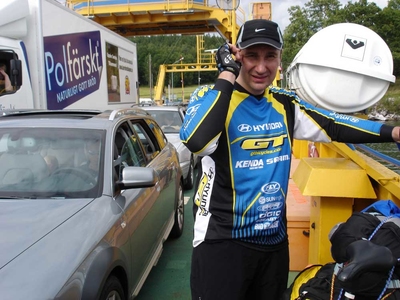 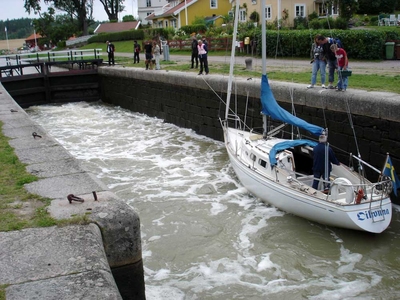 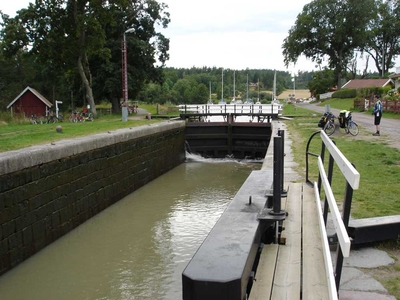 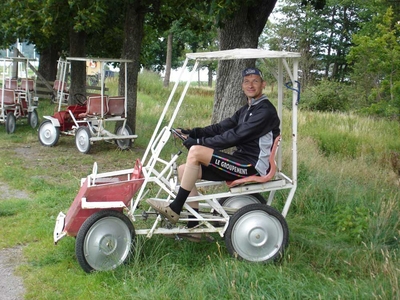 On channel 58 gateways, and the elevation is about 91.8 meters. The channel connected the two largest cities in Sweden - Stockholm and Gothenburg.
Now it is outdated because it can take vessels up to 30 meters and a width of 7 meters.
However, this engineering structure is still used to transport goods and especially for the organization of tourist routes.
Four days in a small boat, you can slowly cross across Sweden, sailing among its meadows, fields and lakes.

The channel consists of four main segments.
From the Gotha canal seineweg the Baltic sea with lake Vättern and lake Vänern, and two separate arteries. Trollhattan canal between lake Vänern and Gothenburg
Södertälje KahnLa between lake mälaren (on the shores of which is located in Stockholm) and the Baltic sea.
The yellow figure at the top is clearly visible.

Our plan was to proceed along the canal to lake Vättern from MEMA to the town of Motala. 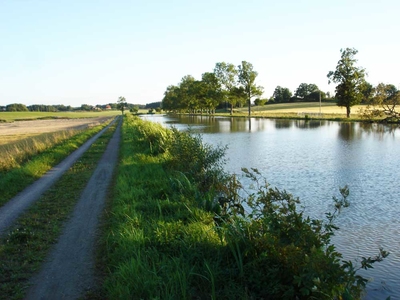 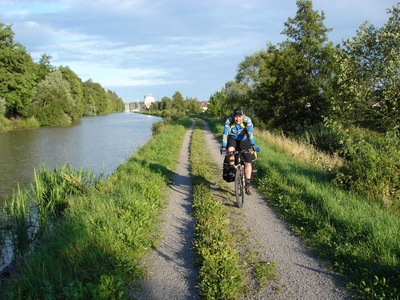 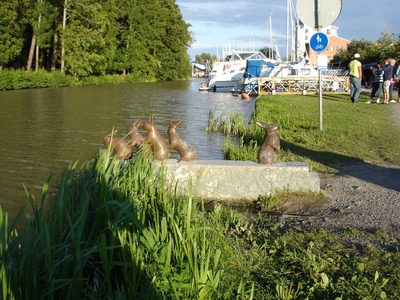 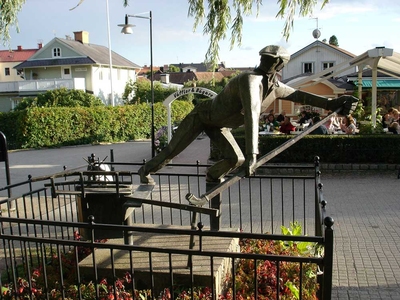 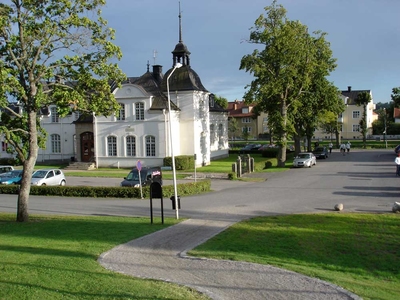 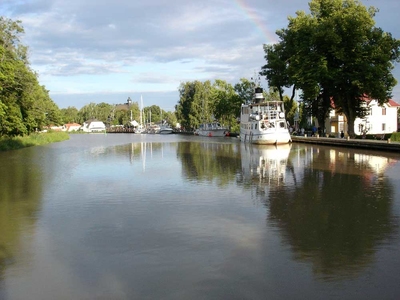 What we actually do, after spending some time in the Meme and watching how the locking motor yachts.
Do not be surprised that everything here remained the same as it was almost 200 years ago.
Except that the heavy wooden doors of the gateway are changed from time to time.
Water does not spare the tree and probably they will quickly rot.

Along the canal there is an earth track.
It is a popular walking and Cycling route.
A pleasure to drive. The elevation is almost there.
That's just ghastly water of the channel does not cause much enthusiasm from the neighborhood .
Dima also grumbled at first that familiarity with Sweden he had to start near the ditches with standing water.

Dima: Jot Along the canal we rode the bike path, constantly meeting fellow riders with whom bowed pleasantly surprising how friendly the people inhabiting this country, it was necessary to verify more than once.

At a distance of several kilometers from the Meme is a very charming town Söderköping.
Fun in the evening there is a beat key.
People sitting in restaurants by the canal, and danced on a typical dum dum Swedish disco where straightforward rhythmic tune in the pen was moving to the beat of anyone at all.

The embankment of the canal they had like resort area.
Many strolling couples, playing children and we sweaty, disheveled travelers suddenly appeared in the center of these activities.
I didn't care how we look, but Dima had not yet reached a certain degree of apathy is vital to every ledputeshestvennika.
And obviously felt awkward.
If he suddenly stripped naked and placed in a ballroom with lots of food and well-dressed guests.

I wanted to hang longer, but Dima pulled me nervously and I had to go on. The monument rabbits, looking after apparently drowned grandfather Mazzei, the city ended. 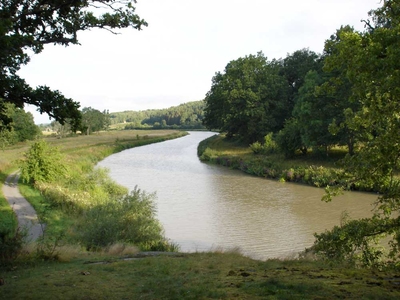 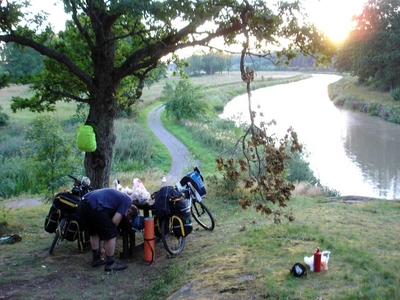 It was getting dark. And it was time to think about bed.
But it's definitely not possible to stick somewhere in the tent. I wanted to at least minimal privacy.
But there were fields around me.
And then as if by magic the road along the canal suddenly went upstairs huge covered with grass and trees stone boulder.
The boulder was hovering over the waters of the channel.
And under the green canopy crowns were hiding a real Parking lot with a toilet (though cold) , a table and even a fire pit.
Swedes use and equipped with all potentially suitable for leisure place!
And this was the ONLY one for miles in both directions.
◄ Prev
Next ►