Rock-n-roll of the Kattegat sea 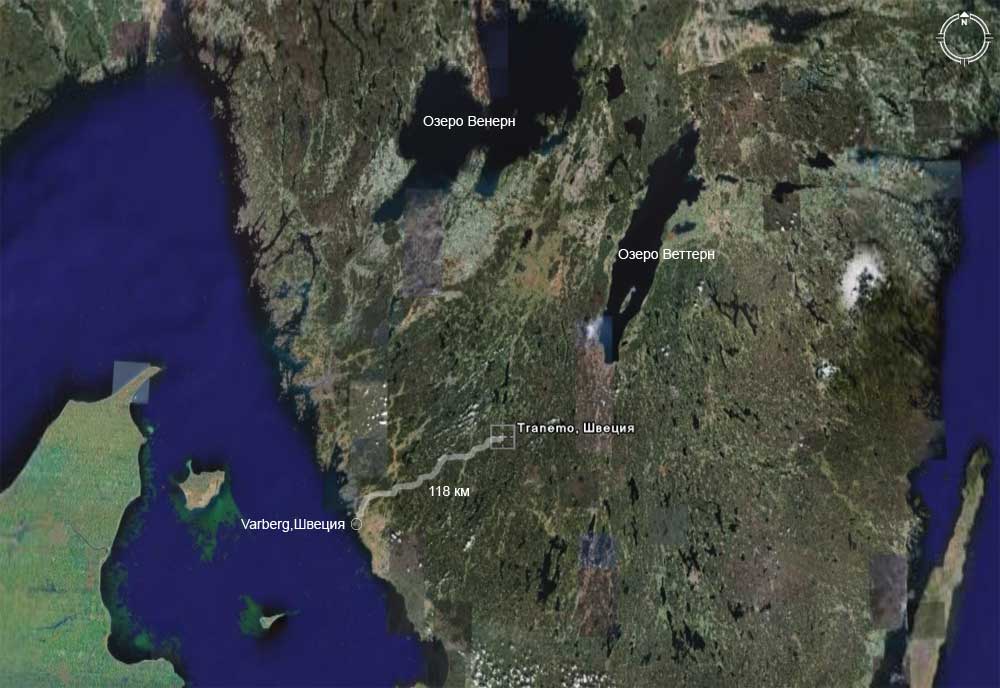 Only in the morning we could see our bed.
I stuck the nose out of the tent.
The sky was not happy.
Dark clouds blanketed the whole sky.
In the air hung a light drizzle of water.
But there was nothing. Our share of this - whatever the weather, and a hundred kilometers take out so positive.
Even to sit and to sleep we could not.
Time was running out. 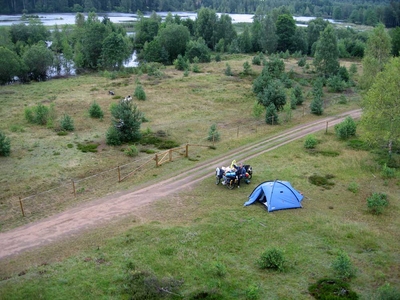 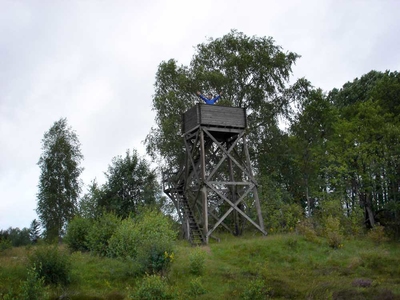 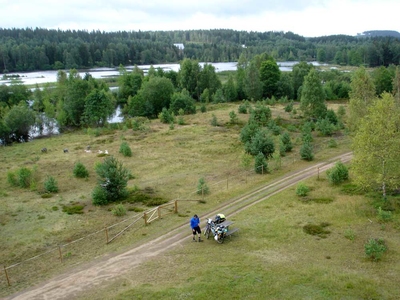 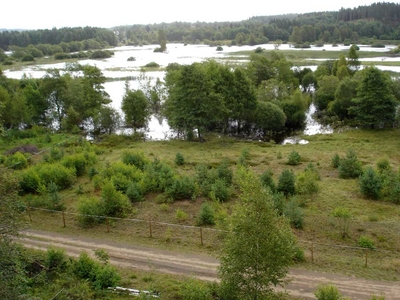 The tent we were put right opposite the entrance to the paddock.
Here was located the table, probably for the shepherd.
The shepherds see in Sweden with a whip do not go and legs captivat .
And sitting around, lounging in front of fence reading a newspaper and Smoking a cigarette.
However the latter is very controversial
Moreover a bit further sticking out of the ground observation tower. Like for example those that are on the perimeter of the prison.
It certainly not one sheep can not miss.
Really why bother with the legwork for the cattle, if you can comfortably hang around in one place.

Gather in the rain and stuff in your backpack wet tent and belongings - enjoy below average.
And because we were going faster than normal.

So as it turned out that the toilet theme leitmotif runs through my whole story and reaches its climax in the epilogue.
So this morning he began to look for a gas station with a toilet to make myself in human form with both sides
Your humble servant be so scrupulous, and was satisfied with the cleaning of teeth and washing of plastic bottles.

The gas station we found, but it was closed.
He had to go unwashed.
Dima explained many times to me that after visiting the toilets he goes much easier.
You could even say the bike carries it by himself.
The reason for this phenomenon can only guess.

On the outskirts of the city the wrong way and while returning fell under prolinOh rain, barely having time to hide under the canopy of the warehouse.
But in nature, like life, nothing is eternal.
All things of course.
Including the rain.

Yes Varberg at a conservative estimate there were over a hundred kilometers.
The area is absolutely uninhabited and forested.
Lots of hills, which is not very typical for Sweden.
The day was marked by rain.
We probably ten times smali and wearing a outfit.
A couple of times successfully hid from a particularly intense rainstorm.
And even managed to combine this hiding with lunch. 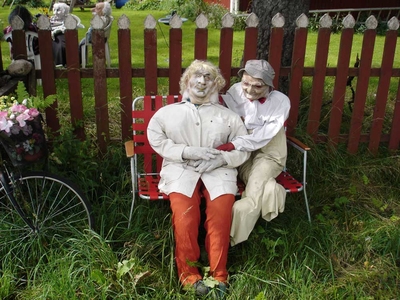 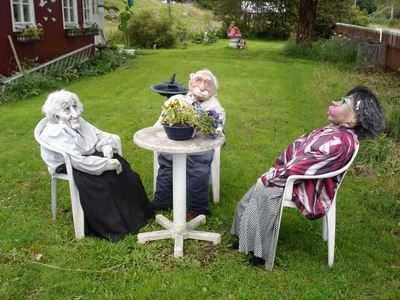 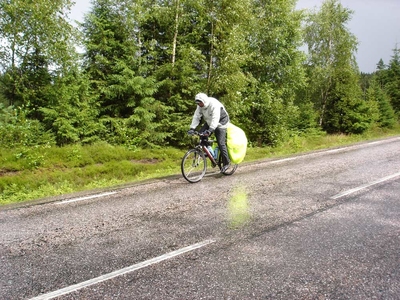 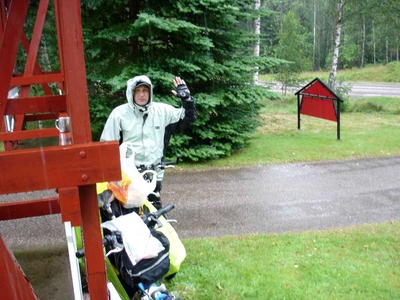 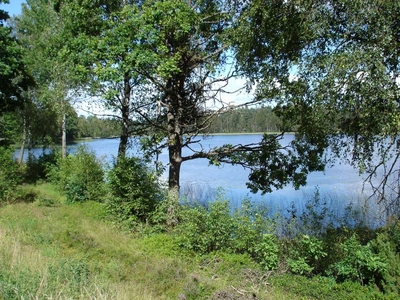 We stopped in the forest to the next shelter without noticing I accidentally stepped on an anthill.
Felt only when waited for the first bite is like a pin poked.
Lo and behold - all the feet of the ants are swarming.
And the ants there is healthy what is not an example of our small Ural.
And jaw they see muscular.
Crawled wherever you can.
I then from all the cracks were getting.
Yes, Bouncing occasionally, when the insect has reached my tender flesh.

As you get closer to the West coast of Sweden, the clouds began to disperse.
The wind from the sea blew them or something.
I especially liked the area of 15-20 kilometers when we were always rushing down.
I was waiting for the lift after the next descent. I never found it.
Just ydivitelno how we managed to climb so high.
Apparently the Central part is located on the plateau, which of course goes to the sea on the descent.

Very beautiful Swedish forest.
They are clean, fresh and noble like a woman in rasvete forces.
And the air! Filled with the smell of wet pine needles , thick and viscous.
Is it like the smell of old stones of any city.

Soon the mountains and the forests ended. In the distance glimmered the sea.
And to the left away from the road, we noticed a huge metal tower similar to pylon.
There were about a dozen. Onnor stood side by side and wire them did not fit.
It was an ancient Grimeton radio station (Grimeton) built early last century by the Swede Alexanderson.

The life story of Ernest Alexanderson is a reflection of the development of electrical engineering for more than half a century. He was born in Sweden in 1901, emigrated to USA in 1902, at the age of 24, began work in the company "General electric".
Then Marconi succeeded with wireless telegraphy, and was now working on increasing range.
Telegraphy was born, and there are other areas of electricity use.

In 1904, young immigrants had been entrusted with the task is regarded by all experts as the impossible – designing high-frequency generator with a frequency of 100 000 revolutions per second and with a power output measured in kilowatts.
The existing generators are provided in the best 60 revolutions per second, so the idea was considered by most engineers as fantastic.
Alexanderson took up the challenge and 24 December 1906 he broadcast the first radio program of voice and music thanks to the high-frequency generator of undamped oscillations – the brainchild of Alexanderson.

Design Alexanderson improved and finalise by the end of the First World war. In 1918, through the alternator of Alexanderson, U.S. President Woodrow Wilson from the Marconi station in new Brunswick has appealed to the Kaiser Wilhelm with a demand to abdicate.

Marconi, who visited the U.S. in 1915, examined the alternator of Alexanderson and noted its superiority over their own equipment installed on the newly built radio stations.
As a result, the Marconi equipment was dismantled and installed a new alternator Alexanderson.

Sweden also bought alternators for the station in Grimeton (Grimeton) .
Preparation of equipment for Sweden implementationlalas under the leadership of Ernest Alexanderson.

The scientist was awarded numerous honors and awards.
In 1983, posthumously, the name Ernest Alexanderson for the invention of high-frequency alternating-current generator was entered in the list of the greatest inventors in the US National Hall of Fame.

Primatorska radio station was inaugurated by Sweden's king Gustav V in 1925
It was used until 1996 .

At present, the Electromechanical generator that is configured to a fixed low frequency of 17.2 kHz, preserved as a national monument of antique equipment.
And even recognized as a UNESCO world heritage site.
In the middle of every year "Day of Alexanderson" turn it on to transfer in Europe encoded in Morse code the Callsign SAQ.
Russian Amateurs too take active part in the celebration of this day.

Immediately reminded of our Ufa radio Comintern.
Which could also be a local landmark and a monument of history.
But was recently demolished local evenementenorganisatie for the release of sites for development.
Once again I was sad and hurt for his country.
All destroy for short-term profits. Even the memory.

Varberg emerged from behind the nearest hill.
This city I was familiar with pozaproshlogodnie trip to Sweden.
And then surprise uncharacteristic of Swedish cities and crowded noisiness.
But this time reality surpassed all conceivable limits.
After passing the port and catching up with old Varberg fortress, we were literally wedged into the crowd of people in a living stream flowing along the embankment.
There were so many people that we were forced to dismount.
It's an obsession.
Maybe in two years the Swedes from Varberg, invited the Chinese for their own reproduction! 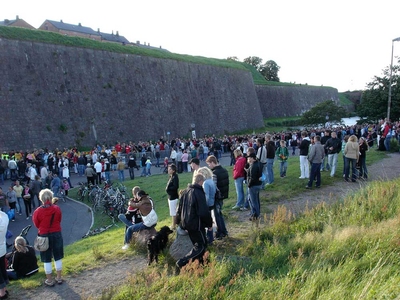 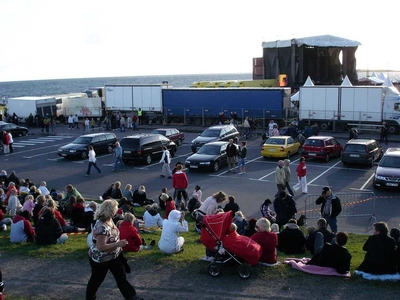 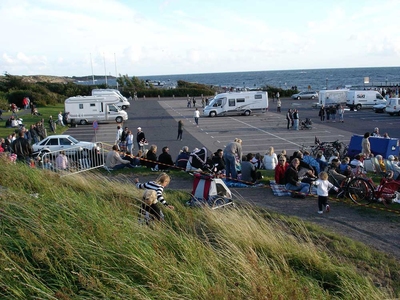 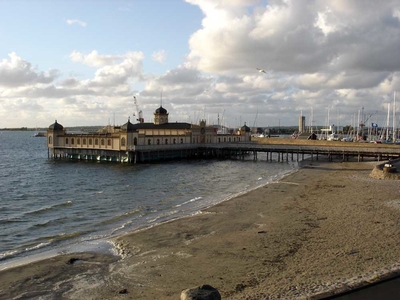 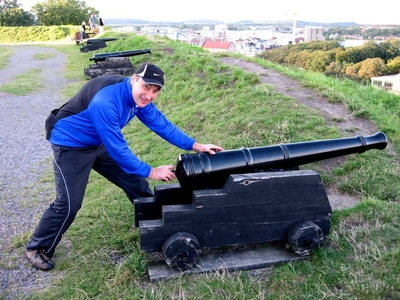 The answer was more prosaic.
Just this day, pRamo on the shore of the Kattegat sea, the walls of the fortress gave a concert of some sort of super group.
And the people are mostly young people came not only from all over Sweden and Denmark.
Fortunately it was only a two-three hour ferry ride.
While the musicians were preparing. Set up the tools.
I took on the chest.
The concert was apparently scheduled for late in the evening.
Knock a bit, we were forced to go into town for water and provisions.

And on the way popped into the castle itself.
I've been there, and my friend was interesting.
But at the top of the passages have been closed guard rock singers.
So the audience is free then the top is not looking.
A review of the fortress located on the hill really was wonderful in all directions.
The city was as on a palm.
Was perfectly visible to a complex of saunas - a wooden Palace on the water.

When we went back down to the abandoned bike, he saw a man suspiciously played all around them.
Dima then I uttered that phrase in English "Eni problem?" sounded rude.
Like for example I asked "Dude what are you doing here go snooping!"
Well, he must know better.
And the Swede just simply lose your keys.

Dima: Varberg compared to other cities slightly stunned, lots of people (not surprising, because there was a concert of local stars) unlike other towns almost deserted later than 19-20 hours.
The local fortress bothering me one good-natured family, who asked me a bunch of questions, the benefit of my modest knowledge of the English language tolerably well enabled to maintain a conversation with them
During the inspection of the fortress we met with them several times, exchanging smiles and greetings to the local mode.
Here we visited the grocery store such large size and abundance of goods, previously I had not met.
In this shop young girls PRhave inali us for local Swedes, we are very surprised, although it may be unshaven and wrinkled face, with tired and bloodshot eyes international.

In the center of town was located the biggest supermarket ever seen me - ICA Quantum.
The second time I was in it and was again shocked by this realm of food.
Here you can walk all day, mouth Agape and drooling swallowing.
Everything is so fresh and neveroyatnyh quantities and versions.
So what we were trying to quickly and to run at a gallop from the door to the cash register it took almost an hour.

Dima fell into prostration.
Whether from pedaling, or mechanically from what I have seen and bought already two bottles of sparkling mineral water.
One of which is a couple of SIPS poured herself right at the exit.
The bubbles brought him back to life, like the epic hero from the tales of those who drink the living water.

Specifically, the sun rolled over the horizon. Twilight deepened.
The desire to listen to a concert Dagenais emerged.
We grew very tired for the 120 km journey from Tranemo.
And the next day we had to get up very early in order to catch the seven o'clock ferry to Denmark.
A place to sleep I planned to find the waterfront Park located near the town.
Near the white lighthouse.

And so it happened. The place there's quite a passage.
But late in the evening and the concert played a role.
And I found a secluded place among the rocks sheltered from the wind.
And the wind from the sea was very strong and cold.and literally cut down to the ground.
The sea, too, was grey and uninviting.
Storm.

As I put up the tent, the darkness deepened and food was prepared in the light of the lanterns.
But in General I liked it.
Very romantic.
Sorry words can not convey all the senses.
And Dima is not a girl 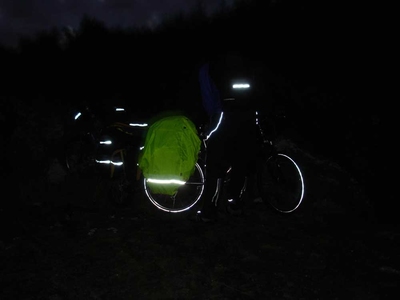 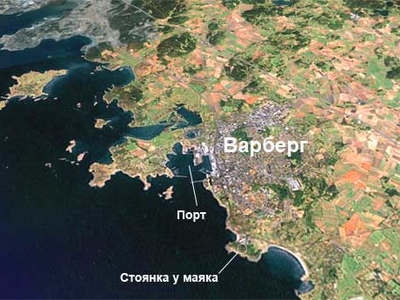 Dima: Our evening menu we have diversified a little vodka taken from Russia and other pleasant trifles.<br /> Impressed with the contemplation of the Atlantic ocean and overnight amongst the rocks under the powerful gusts of sea breeze.
◄ Prev
Next ►