Cycling / The fourth sense of Scandinavia / Valarelli in the dark

Valarelli in the dark 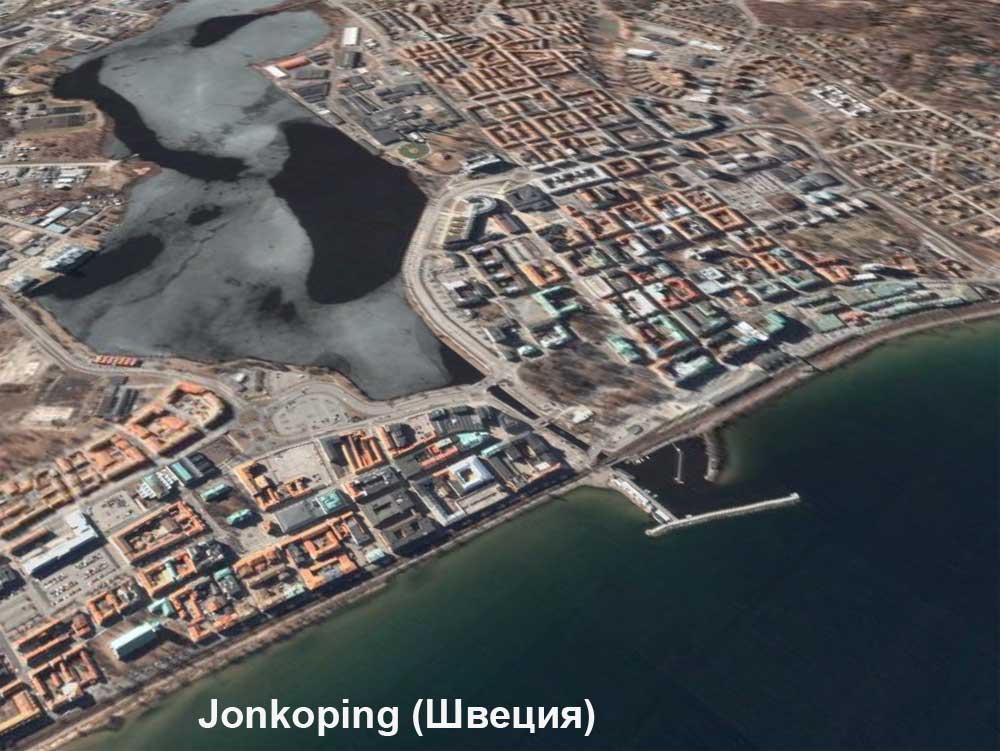 Getting up early in the morning is the hardest in the city.
When you have to get out of a warm bed and trudge to work.
In the tent it's different.
Body like a spring popping up out of sleeping and moves to the water with a bare top for making water treatments.
The crisp coolness of the Swedish summer morning only adds to the swagger.
And fresh oatmeal on the water does not linger at the table .
I want to eat it quickly and go further.

Especially ahead of a huge city - Jonkoping(Jonkoping) stretches from the southern tip of lake Vättern.
More precisely it is even not just a city, and the metropolis has swallowed up nearby towns Huskvarna and Norrahammar.
It is located at the mouth of the rivers Nissan and Lagan . The name consists of two words - Jon - from the river Junebacken and koping - so in ancient times was called the market or shopping center.

Jonkoping is known for its match industry developed in the period 1845-1970 years.
Today the city is an important Swedish industrial centre, with the Central warehouses of many companies (such as IKEA, Electrolux and Husqvarna).
It is also a famous educational center. Here is the most famous in Sweden University. 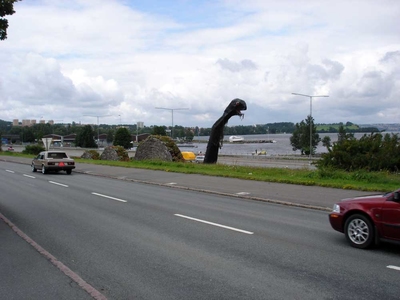 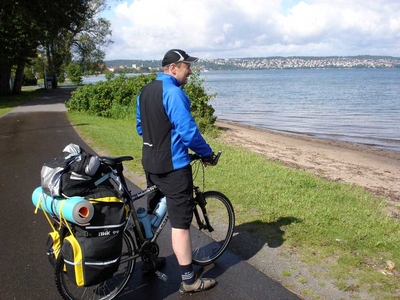 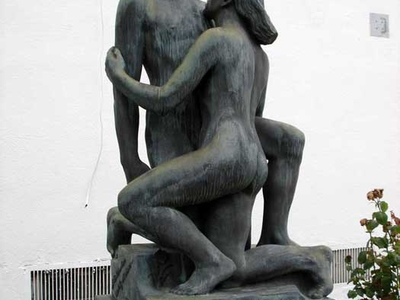 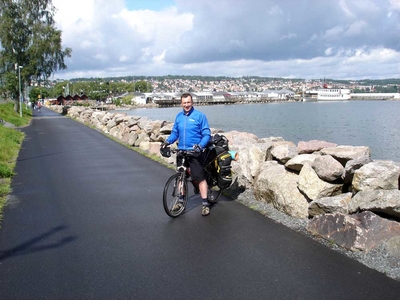 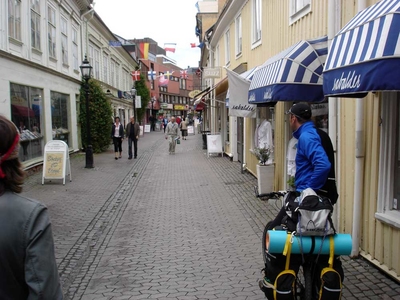 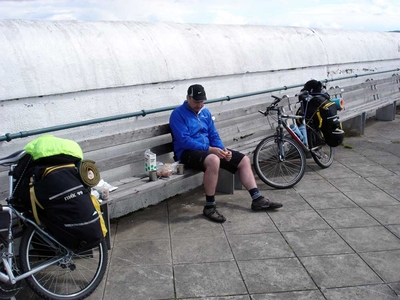 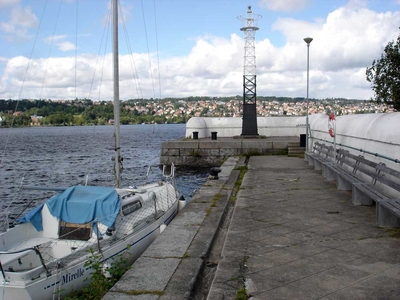 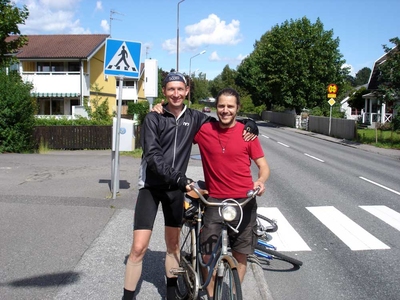 My friend why it fell into a deep sadness after seeing the main sight.
When we are conveniently located on the pier he loved to slurp the milk from a-liter package, eating pound piece of cheese.
I have stopped being surprised wide mouth and appetite Dima.
Although the beginning was somewhat stunned eating a stick of sausage in one sitting.
Nothing strange said Dima - I need protein and a bit off from the quarter.

I have a feeling that trying to match the tourist fraternal principle - all in half he was constantly malnourished, or even starving.
Such razmyshleniya made me think about the fact that the participants of the tour should be such as to approximately conform to each other in the physical condition and muscular proportions.
Otherwise, the imbalance can lead to all sorts of conflicts.

Whether the student atmosphere of the industrial city has produced such an effect, whether the milk was stale, but the collision occurred in a vacuum.
To call it a full-scale conflict is impossible, but we bet capital.
Dima wanted to spend more time in the cities, enjoying the old stones and diverse audience.
And our way of thought long journeys outdoors.
And the city was only promezhutochnye points on display which was given not so much time.

In fairness I must say that the Swedish city similar to one another.
They are not so much of antiquity.
This is not ancient cities of France or Germany is crammed with castles and other landmarks.
And look, even major Swedish city shouldn't be too long. 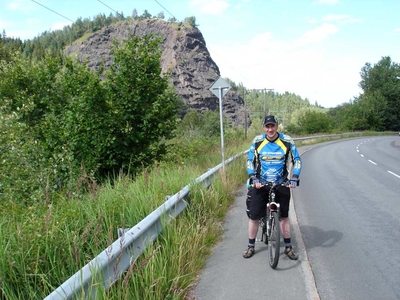 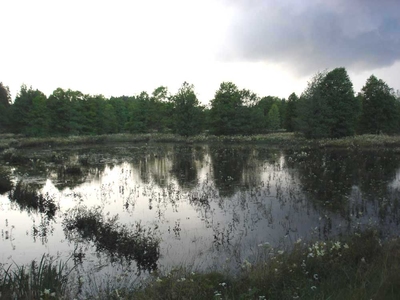 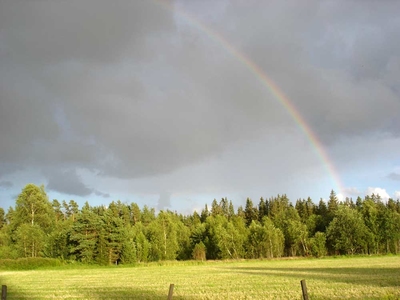 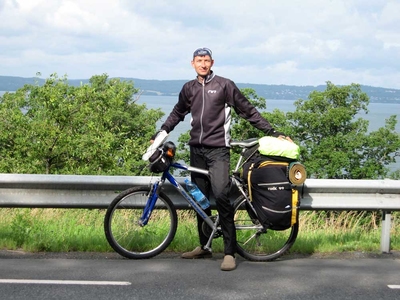 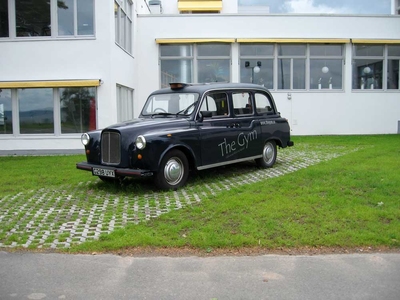 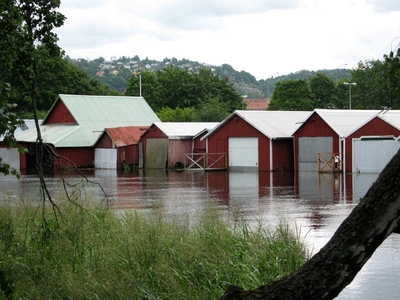 Dima: On the waterfront of this city was an easy mutiny.
One of the expectations from Sweden was that I thought in such a small country the population density is much higher and on our way we will meet and explore the various towns with their cultural and historical attractions, but those were not so much, but mostly fields, trees, and natural landscapes are painfully reminiscent of his Native Bashkortostan.
As it turned out, it was a feature not only of the nature of Sweden and the embodiment, the secret plans of Igor – a great lover of wildlife.
In General, the voting was, I wanted in Gothenburg, the more he is closer and will have time to spend the day sightseeing.
Igor wanted to Varberg, the voices were divided, and in case of equality the vote of the Chairman is decisive.
Well, well go to Varberg (was not in vain).

Later we spent a few bolthe again time to visit the towns, met on the way, and I have not had the impression that in the cities could only explore the neighborhood around the supermarket, when Ihor buys the groceries and I were watching stuff and bikes at the entrance.

Pometov in each other eggs, we calmed down and Dima, in obedience to the opinion of seniority, followed me towards Varberg.
We had a fairly large cast through mountainous terrain South-West of Sweden.

With the departure we started all this bother.
A dense network of roads.
There were paved highways and resolutely not clear where to go the two-wheeled traveler.
Was bounce in one direction to another.

And then Providence sent us a guide in the person smiling and living a boy named Andreas.
Like all Swedes he perfectly spoke English.
In the face of his friend Dima I found a good interpreter.
It is the nature of its activities, studied the language and could much more tolerable to speak on it than I do.
And they did it with inexpressible intonation, and significant pauses, as if deliberating over every word.
But it only gave importance and significance of his speech.

Andreas volunteered to take us goat trails and to instruct on the true path forward wheels.
It was stupid and we willingly followed after.

He said he went to visit his future wife.
Which was very beautiful and was looking forward to the groom in his red house sitting by the window and looking up the road.
I consciousness as if for a moment okunulis in someone else's life.
I suddenly no longer see Sweden as the road and feel if you want to, brother-in-law this Andreas.
I even introduced myself as he introduces us to his bride.
We sit at the table laid a woman.
She laughs, feeding Apple pie and veal meatballs.
Pours us a mug of juniper brew.
Her checkered apron.
Rushair and simple peasant face.
On the face of Andreas happy smile.
I heard the clattering of the mower and through the open window in the room bursts into fresh air filled with the smell of cut grass.

Guy Stoke on creepy prehistoric bike creaking and rattling its component parts.
However, this did not prevent him to go far ahead of us.
Had to strain not to miss him.

My partner by the fifth day entered into a rut and went now quite good.
The rest of the day leaned on the pedal.
Rural Sweden, pastoral landscapes and nothing remarkable.
If you don't count a huge double rainbow across the sky, from the earth to the earth.
Such a quality of the rainbow I've never seen.
Looking at her really realize that the earth is round.

For dinner we had to get water.
Near the town Tranemo(Tranemo) put it in some roadside restaurant.
At the entrance was sticking some swarthy type and the entire breadth of his body blocked the entrance.

Dima with all its possible scratchiest and longing in his voice asked standing at the entrance of the water rocking under his nose for emphasis two empty bottles of Krasnousolsky.
But whether the form of bottles are not convinced Asian, or decided to cut some money from tourists, but he made it perfectly clear that he wants a lot of crowns.
Surprised we used that really what that, and water in Sweden can be found for free everywhere.
Of course to go on about the vile extortion, we could not.

About Tranemo was a lake and I thought that there we will probably be able to find a place to stay.

Leaving Dima in the Park I rushed to investigate.
It is surprising but to the hundredth kilometer I was fresh as the morning. On the shore of the lake beaches and private villas.
And because I had to drive a good half of the shore before you run out of the building and went to the Park.
PlacesI found quickly and half an hour later returned to his friend.

The nearest grocery store I had to buy food.
What we successfully did
Dima has again persuaded me to buy a sparkling water for himself.

While we were busy in the grocery store it was quite dark.
The city was located on one side of the lake and found me a place with the opposite .
From the point of view of banal erudition it doesn't matter which side was to go around the lake.
And I decided for a change to do it the other way, not to go back.
But this logic error has crept in which had to feel later on their skin.

The lake was irregularly shaped.
The side with which we in the end went it was elongated and swamped because there became a small river.
And had to make a big detour.
Finally it got dark, the wind rose and it began raining.
At first weak and then stronger and stronger.
Lights on bikes were unable to dispel the darkness.
Had to go with caution literally groping path.
First, the shape of the water is still served as some sort of landmark but then we went into the woods and had to rely on intuition and a compass that is in the head of some very advanced people.
I will not say who, although it's me. 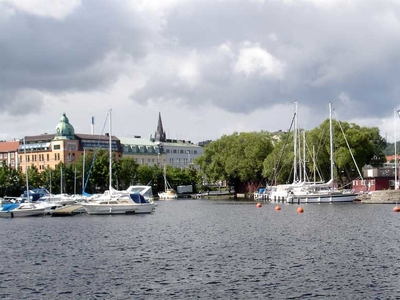 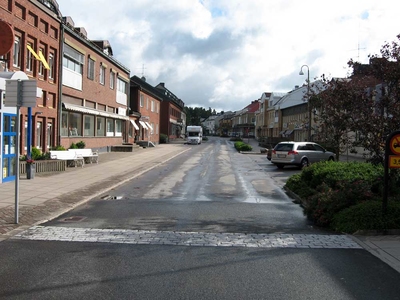 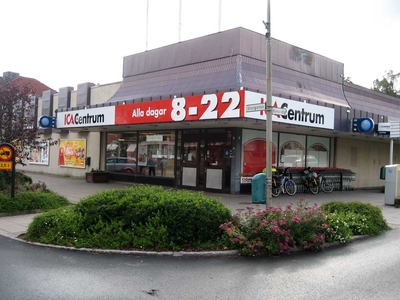 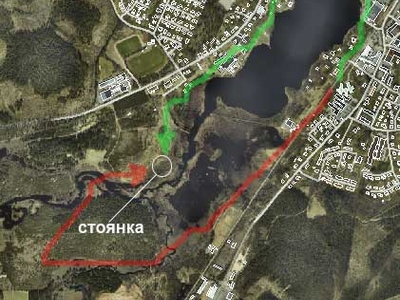 We tried to pick up the right as much as possible, trying to find the path of the detour lake as short as possible.
But the swamp appeared to be elongated.
In addition, a lot of fan tracks diverging in different directions left a lot of room for topographical orientation.
Dima stoically puffed behind, not falling one iota.
All the same, he was extremely successful in this regard is satellite.
My friend Rinat in a similar situation covers and all the three-storey idiomatic expressions.
I felt dumb the blame for the incorrect decision.

The rain had turned in the shower. Water poured the face. Even the hood of the jacket a little saved.
The forest could not see any end or edge.
And suddenly ahead, a glimmer of light.
The curve brought us to the river which was at a decent height spanned by a suspension bridge.
So narrow that a bike with a backpack occupied the whole of its width.
And rope as a handrail passing on the knees also did not inspire much joy.
Go decided one for security.
The feeling was still the same!
Slippery boards, slanting jet of cold rain, squally wind, swinging bridge, flashes of lightning periodically illuminating the picture.
And I goose-step going over a water stream.
In the middle of the oscillation amplitude reached its climax, because apart from the wind the bridge was rocking from my steps.
Tossed from side to side.
Tightly gripping the steering wheel, mentally cursing everything.
At last I found myself safely on the shore and throwing the bike, ran to see goes as Dima.
It is a pity that no pictures. However unlikely something happened. Only the camera soaked.

After the river became clear about where to go.
And ten minutes later I finally found a place explored two hours earlier.
The rain subsided gradually, we set up the tent quickly and ate and went to sleep.

Dima: . Side by side behind the fence grazed by peaceful sheep, which bleated quietly in the night, probably afraid to disturb our sleep.
The day for me was especially important, as all the effects of acclimatization overcome, I was involved in the campaign, the difficulties of the initial period is over.
◄ Prev
Next ►