Cycling / The fourth sense of Scandinavia / Well at home the smell of hay and ...

Well at home the smell of hay and ... 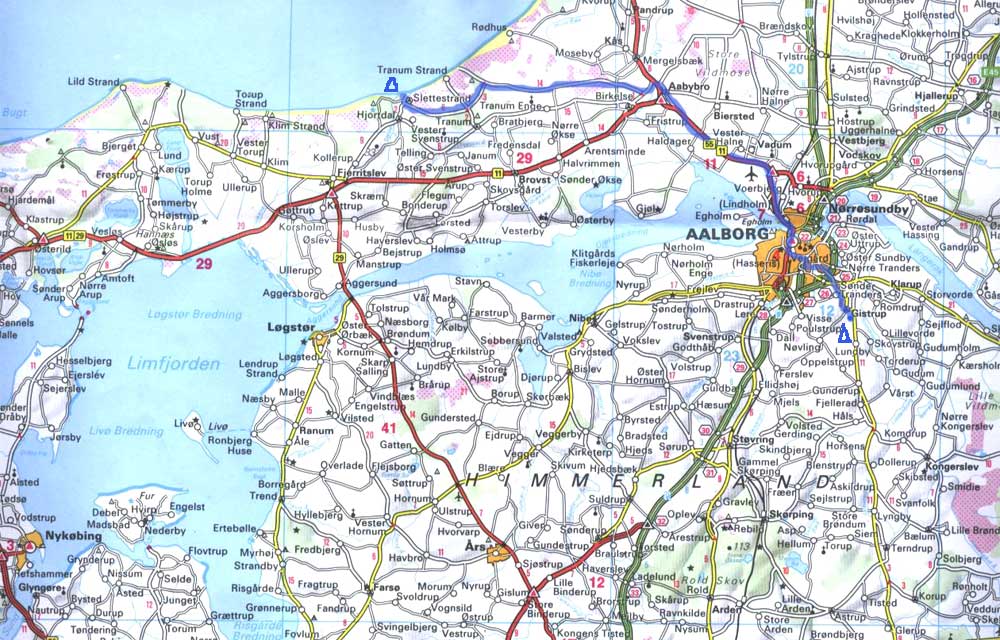 I woke up from muffled yapping.
Half asleep I thought that Dima's snoring. But he lay quiet.

Close to our tent what is the Danish peasant was walking my dog, with interest glancing in our direction.
But culturally stuck out further away, not closer.
His dog such sentiments were not burdened and does RUB against the tent, nosing around our stuff and in between these fun activities lapped NATEXPO water from the tap, which I mentioned last day. 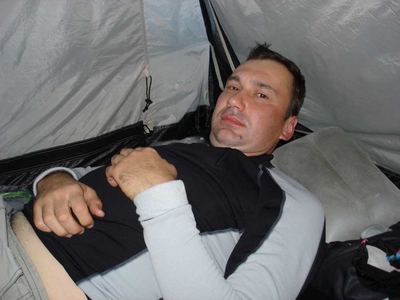 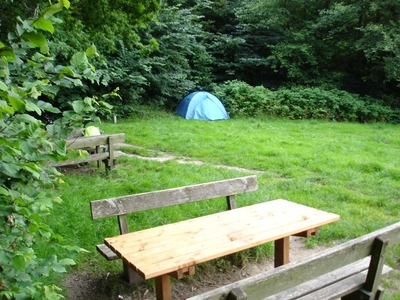 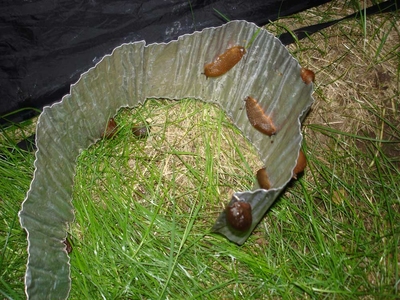 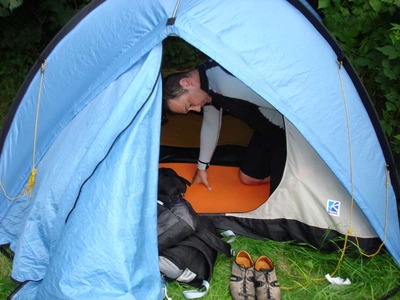 Then I discovered that in addition to the dog tent was invaded any snails or slugs.
They're ruining not only her, but the burner and veloryukzaki.
From their sleek fat bodies on things were sticky whitish trail.
And this trail proved to be extremely stable and hardly washed with water.

The sun has risen. Delay had no sense.

Just a short distance from our camp site was located the largest forest of Denmark Rold Skov.
In ancient times it hosted the robbers and robbed passing travelers.
And now it's dark and mysterious place with huge old trees spread their branches like giant trolls.

Ahead loomed the handsome Aalborg.
The city was located on both sides of the lim fjord.
Once it was the longest fjord in Denmark with a length of 180 km.
But in 1825, a violent storm washed away the sand spit which separates the fjord from the North sea.
And now the limfjord (Lim Fjord) — a system of Straits in the North of the Jutland Peninsula of Denmark, connecting the North sea and the Kattegat sea.
And the Northern part of the Jutland Peninsula turned into an island bearing nazvanitsa Years. 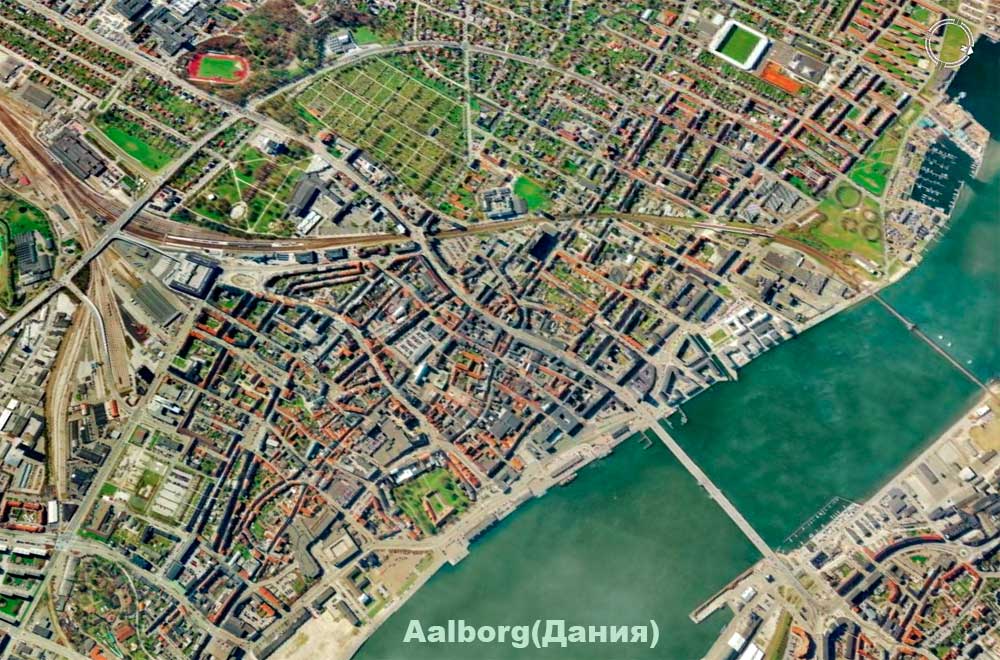 Aalborg(Aalborg) — a town in Denmark, in the heart of North Jutland with a population of about 170,000 .
The name of the city can be read as Caleb, a rough translation means "Inhabited place near the Creek."
Stream frankly somewhat expanded over the last century.
In the middle ages, Aalborg prospered and became one of the largest cities in Denmark.
The welfare of the city even more firmly established when in 1516 Aalborg was granted the monopoly on trade in herring.
The geographical position of Aalborg on the limfjord fjord contributed to the fact that in the middle ages, Aalborg was an important harbour, and later industrial center.
And now it's also a student city.

But it's not the most important thing than the world famous Aalborg.
His world fame is founded on Scandinavian vodka of the akvavit.
Here is today the largest producer and exporter of akvavit in the world firm De Danske Spritfabrikker.

Akvavit — a Scandinavian alcoholic drink, strength about 40%.
The name of the drink comes from the Latin expression aqua vitae, which translates as "water of life", "living water".

Akvavit, like vodka, is made on the basis of the alcohol obtained by processing of potatoes or grain.
The alcohol diluted to the fortress 38-50%, from several weeks to several years to insist on spices, which can include cumin, fennel, coriander, St. John's wort.
Akvavit usually has a yellowish tint, but some brands are brown color, and some transparent.
Akvavit doing in Norway, Sweden and Denmark. Denmark is the main supplier of this drink to the world market.
The only global brand of aquavit, sold in duty free network - transparent Danish Aalborg akvavit, is the taste and smell of caraway seed.
Aquavit is served in cold, the only way he has a distinctive, incomparable taste. 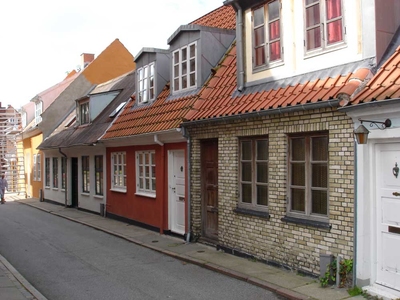 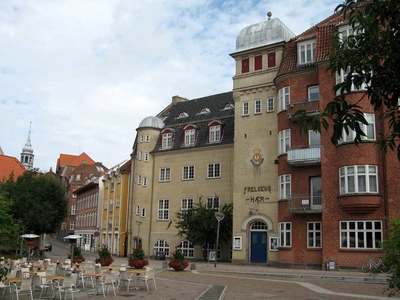 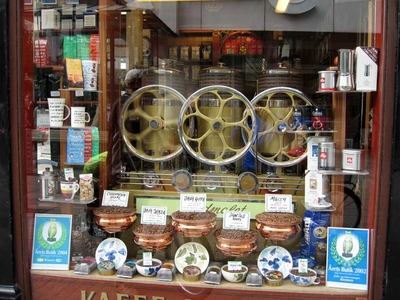 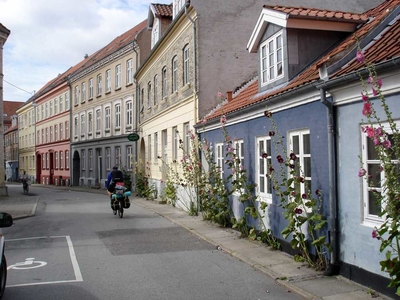 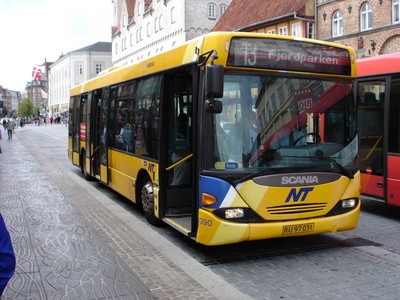 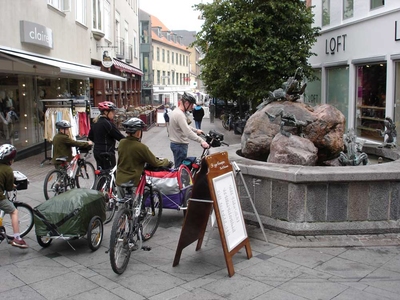 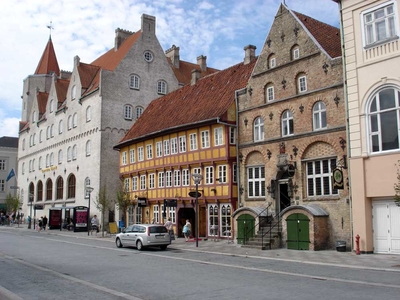 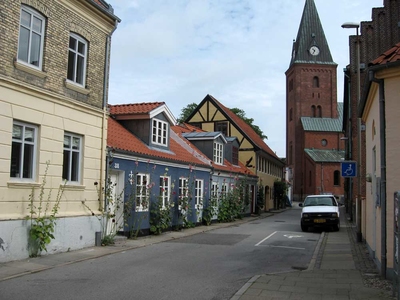 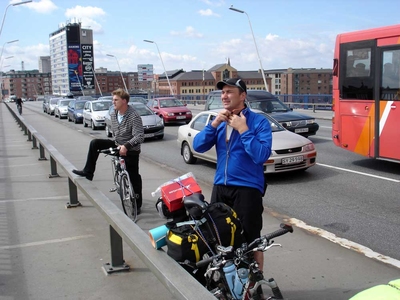 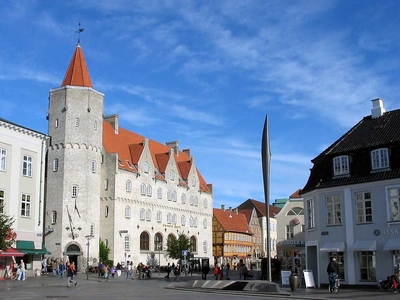 In Aalborg Dima go shopping.
And got gifts for his wife and children.
From early morning to afternoon Danish city is revealed to us in all its ancient beauty.

Noticed that the downspouts of the houses go into the ground.
Apparently there was a sewer pipe.
A very wise decision!
As a result, when it rains, water flows do not fill the sidewalks and roadways and not erode the road surface.
It would seem a trifle, but what a savings.

We Ufa in some areas do not have storm sewers.
And when it rains it is time for residents to get waders and boats.
It's amazing how different the attitude towards their work and other people in our countries.

In Aalborg is the longest bar in the world. It is a street Packed with restaurants and pubs.
We tried to sit in some quaint pub, but this morning that all were closed.
As a result, we were limited to lunch on a bench in the yard.
While we drank the yogurt we were approached by the janitor, which in appearance more like a Bank clerk, he was immaculately dressed and politely expressed the hope that we will not leave behind any crumbs.
What him and assured him with all possible cogency.
After such request, inadvertently watching so that nothing fell to the ground.

Dima: This town we managed to look better than everyone else during our hike.
Despite a pretty early hour, the streets were fairly busy, most of the street cafes that are open at that time (about 10-00 o'clock in the morning) all the tables were occupied.
The city lived a leisurely and relaxed pace, sunshine, around happy smile, one elderly lady stopped Igor, and, seeing that we're tourists made a list of 12-15 local attawn, which we were to visit.
Had to once again pay tribute to the benevolence of the local population, it is difficult to understand whether they are sincere, either the actors are too good, just did a sweet syrup of goodwill.

Although it seemed in Denmark, people are less sensitive, for example on the same day, while eating regular bread with milk, sitting in a local yard, we were approached by some guy and asked him not to leave behind trash, Oh he knew, that even after trips with Igor in his native Bashkortostan, had to come back from the forest carrying a mountain of garbage that prudently left in the most beautiful places of our tourists. 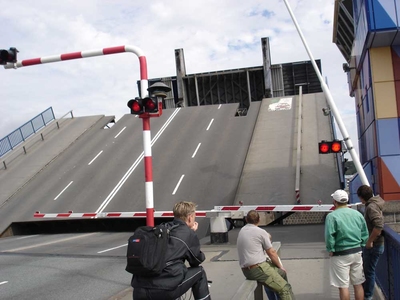 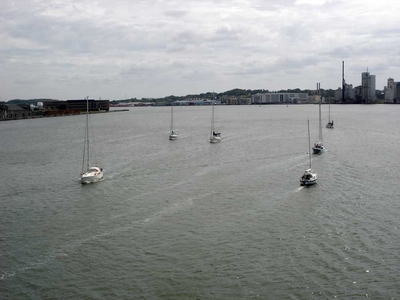 Moving the bridge over the limfjord, a bit did not.
And it parted right in front of our nose.
All in order to skip a mini flotilla of small yachts.
Their tall masts floated somewhere on the level of our heads.

I didn't mention this earlier, but Denmark us first of all remember not historical towns and dunes, and constant exhausting wind.
Which unfortunately kept blowing in my face.

Denmark currently has some 2,000 megawatts of wind energy and about 6,000 of operating wind turbines. 80% of these turbines are owned by individuals or local cooperatives.
The world's largest "wind farm" nahis situated in Denmark, the Middelgrunden city .
It consists of 20 turbines with a total capacity of 40 megawatts.

Wind turbines around the world there are nearly one design - with three blades and a horizontal axis of rotation, although in some places still meet and bladed.
There have been attempts to build wind turbines so-called orthogonal design, i.e. with a vertical axis of rotation.
They are believed to have the advantage of very low wind speed necessary to begin operation of the wind turbine.
But they never caught on because of problems with braking and a number of others.
The power of the wind turbine depends on the area, covered by the blades of the generator.
For example, turbines with a capacity of 3 MW, made by Danish company Vestas have a total height of 115 metres, the tower height of 70 metres, a blade diameter of 90 meters.

Denmark is gradually moving to the environmental sources of energy abandoning nuclear power plants and from thermal coal. 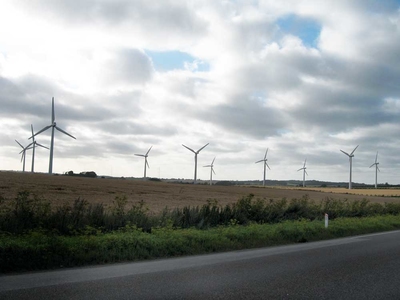 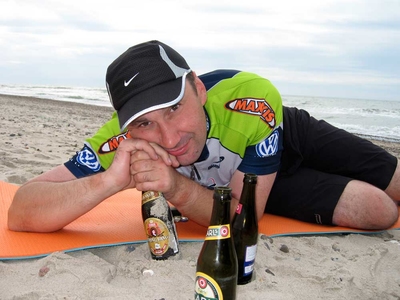 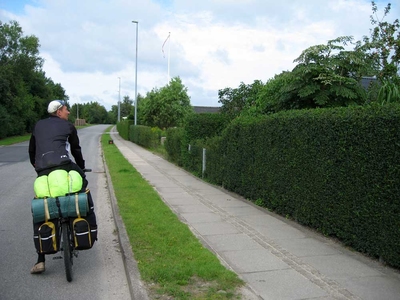 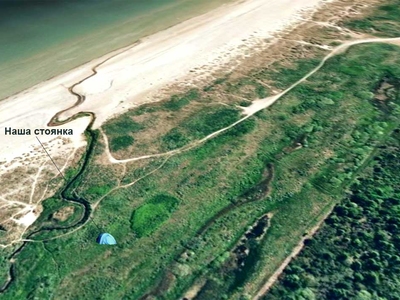 Wind turbines are literally everywhere.
We've gotten good at it - if there are wind turbines all means - wait for the wind in the face.
And if the Danish economy is good, then pedaling sheer terror.

In one place closer to the North sea coast dvadtsatikilometrovaya plot was driving four hours.
I have the feeling that the stories were filled with lead, and the wheels are made from cast iron.
Pedaling and barely moving.
I am so exhausted during that time that his legs were cramping.

In addition to wind energy Denmark is actively going to develop bioenergy, and to build the station receiving the energy from the waves.

And secondly what was memorable in this country stink.
The constant smell of pig farms when driving through the countryside.
Not even during the journey there was more fresh air or smell of products of pigs.

Livestock is the leading agricultural sector of Denmark.<br /> it accounts For 64% of total revenues of the industry. Pig production plays a special role
For example, in Denmark, 25 million pigs to 5 million people!
Imagine how much manure in such a small country!
How many odorous substances from it simultaneously rend the atmosphere!

I read somewhere that Denmark has a deodorant for the destruction of an unpleasant smell emanating from the pigs.
It costs the farmers approximately 5 Danish kroner (0,6 USD) per animal.
And smell decreases when adding a deodorizing composition in water to wash pigs.
Really necessary product.

The second half of the day was a real test for our legs and smell.
And when we finally got to the little village of Slettestrand, almost without saying a word turned to the sea.
Luckily it was only a couple of kilometers.
And the word strand promised a large sandy beach.
Previously bought a few bottles of Danish beer to sample at the local General store, which was a rare dorohuska.

The North sea was revealed in all its severe Northern beauty.
Only the icy wind did not allow long to lie on the excellent beach.

After the beer tasting, which turned a completely mediocre, to go farther this day, no longer wanted. 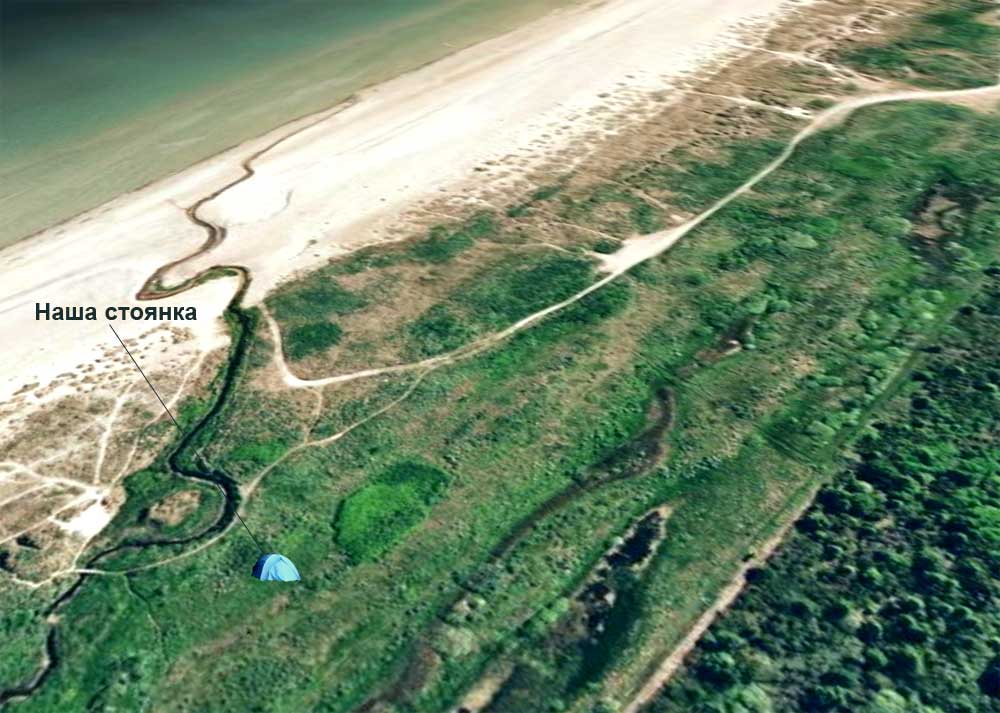 Put a tent in the bushes near the dunes.
Plate kindly provided to us by the firm through its Primus burner, Dima regaled me with stories from the life and thoughts of the eternal.
It was a very interesting conversationalist with a unique sense of humor.
Never said it was clear he was serious or joking.

Dima: Not without the beach and in the afternoon, it did not swim because of the strong wind, but it did not spoil the enjoyment of the contemplation of the sea, drinking beer and admiring the ppoluobnazhennaya ..., Oh no the girls were not, they were dispersed by the wind. .
This evening I shared with Igor his ailments, as the pain in his leg intensified, and became something crackled..
Igor was diagnosed, earlier they read in the medical encyclopedia, the diagnosis was long and I only remember the last word, it seemed to me indecent

The Danish sky scattered with myriads of stars and the night dropped on our heads tired bedspread.
◄ Prev
Next ►