A day will taking a NAP at Ilaw-the Bourne 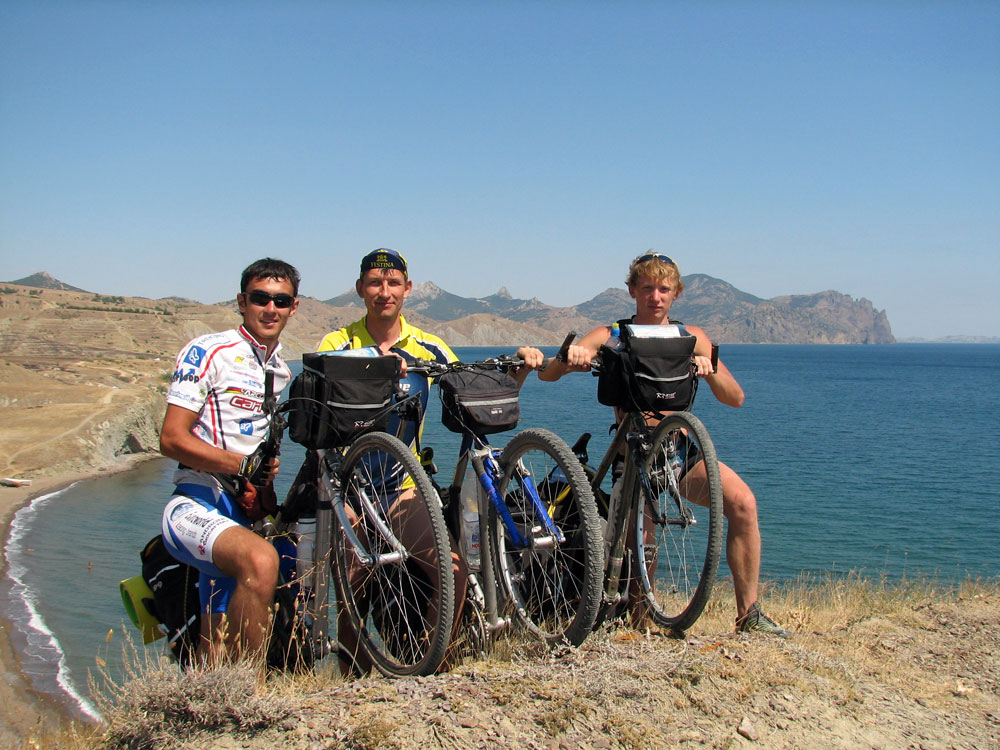 Towards morning exhausted with bloodshot eyes, we climbed out.
The number of tents around almost halved.
The wind was quieter, but not enough to comfortably have Breakfast.
And I made the decision to go forward on an empty stomach to find a quieter place.

For Fox Bay is much easier to go along the shore.
Sand no longer practical.
Nearby hangs over the sea Siderite Cape.
Its foot strewn with red boulders siderite. It is an iron spar ore from which iron is extracted.

Along the way there are man-made totems, towers and circles of stones.
It is an activity of the local public turned on all the symbols and artifacts. 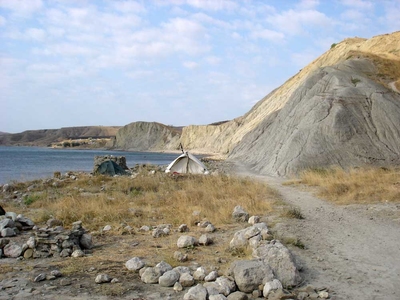 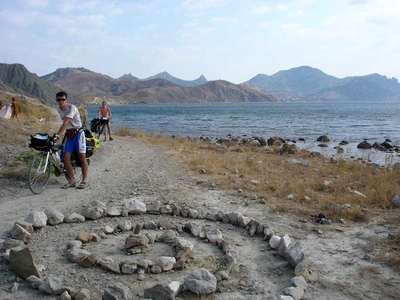 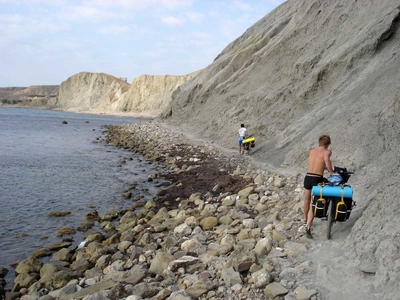 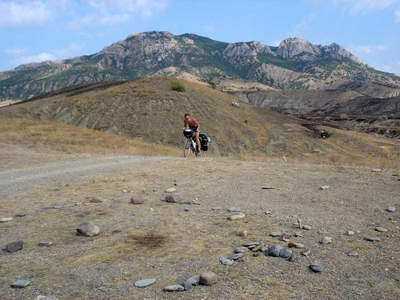 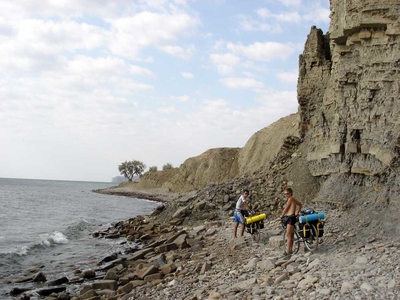 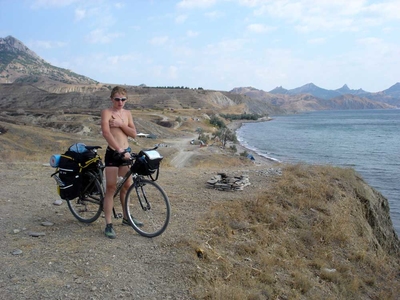 The stretch of coast between Siderite Cape and the Cape Ilow the Bourne, near the Coastal village is my favorite place in Crimea.
It is quite sparsely populated - how unfrequented it may be the southern coast.
Here the warm and Sunny weather throughout the Peninsula.
No wonder the nearby vineyards Arhaderese -Sun valley, where they make the famous Black doctor.
And do it from indigenous grape varieties Ekim Kara grow only in this place and gaining its unique artomat largely thanks to the ever-scorching sun.

The coastline there is a little winding and forms a small cozy bays, separated by poorly exposed in the sea capes.
The bays open beams and ravines, the slopes of which grow rare shrubs krascheninnikovia and silvery Loch.

In one of the coves is a memorable kinogorod.
He's barely changed over the past three years, just kind of added a few paratrechina buildings.

Behind the fake town filmmakers the trail leaves the shore and climbs up a small hill with a breathtaking view surroundings.

On one of these hills directly above the so-called Deletetsky beam I decided to make a halt , to finally have Breakfast and take water treatments.
The benefit side was a beautiful sandy beach.

All of our utensils were dirty and covered with sand from last night.
The mood is orderly Edik did not improve last night.
On the contrary. To watch without stregone it was impossible.
So look only at the funeral.
Twilight as captain strongly contrasted with the blue sea and bright gentle morning sun.

Had to bring him to his senses by the method of verbal-oral therapy.
After the admonitions, requests and demands consensus.
The dishes washed. Porridge cooked and eaten.
While Andrew swam and soared in the warm sand, Edward raped the camera and local women through her lens.
Neither eat nor bathe with us, he did not. 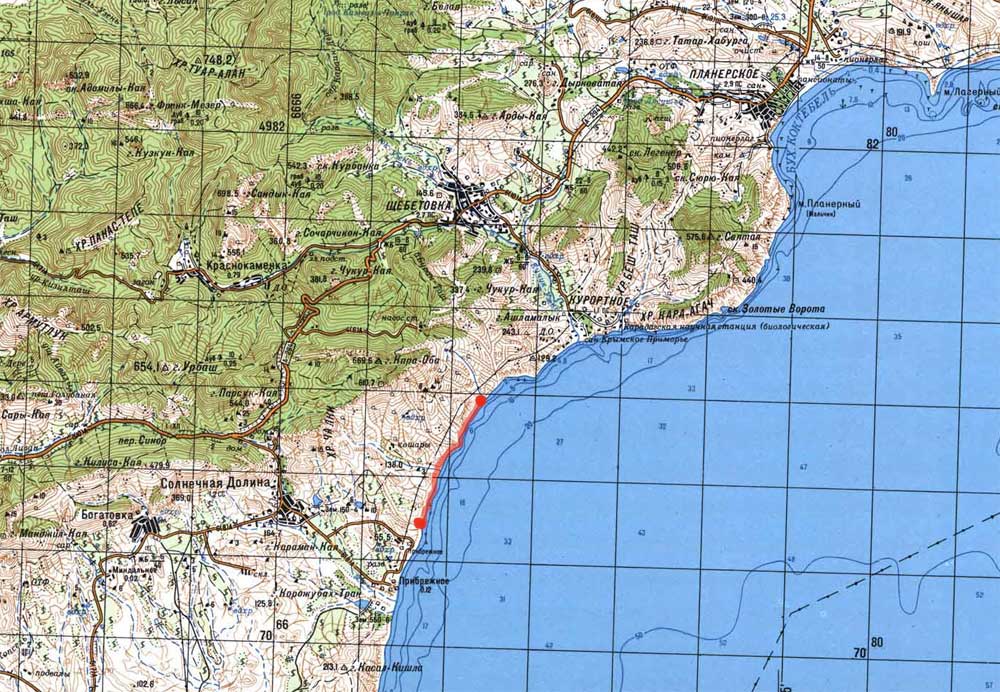 The situation was clear.
Needed rest for the soldiers.
It was decided to arrange a day's rest.

Over the mouth Deletetsky beams rises the flat surface of the terrace, occupied by vineyards, the farm-factory "Solar Valley".
At the mention of that my friends visibly brightened.
Terrace is limited by the nameless Cape - the highest in the County.
Pass it along the shore, breaking the materiel of large boulders.
Or go over the top, climbing up the fairly steep trail.
One man with cargo the bike can't handle. But there were three of us and because there were no problems.
From the height of the headland at both sides of the visible arc of coast from Megan to Karadag.
From the West I could see a promontory of Ilaw-the Bourne for kocoum Bay Mooring was located in the Coastal village.
And from the North wysylka ridge Echki-Dag.

The slopes of the deep ravines of the ridge cut by small ravinesand and gullies, which sometimes form dense branched network called the Badlands(bad land). 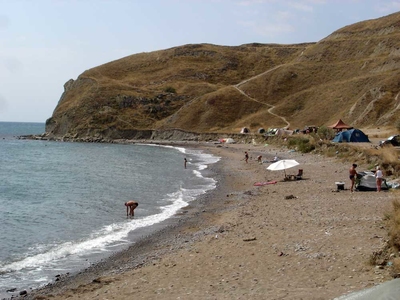 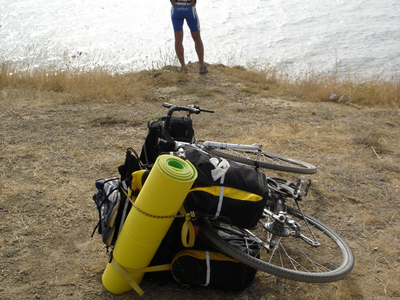 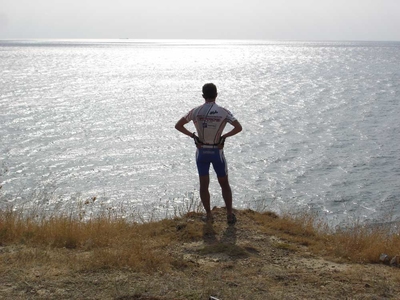 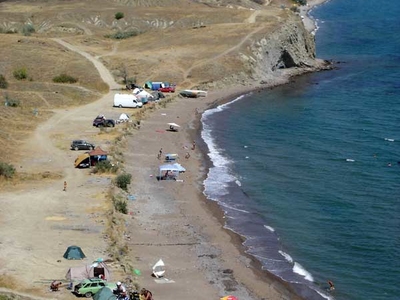 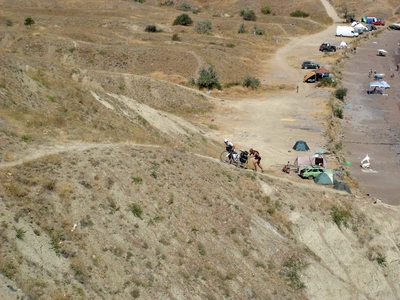 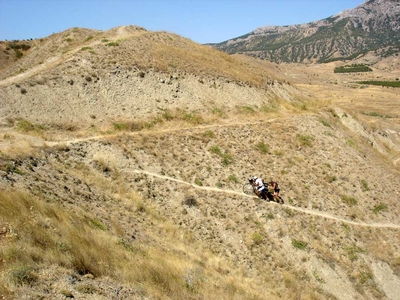 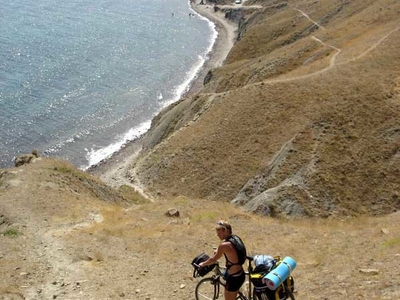 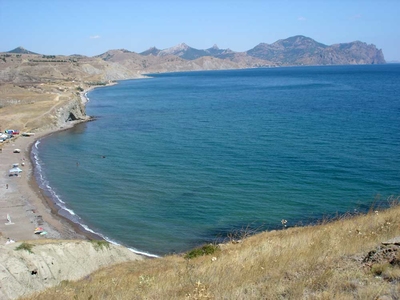 Echki-Dag's Badlands, is an impressive sight, the result of the barbaric man's relationship to nature.
The same fate awaits the slopes on which cut down forests and intensive grazing.
The Badlands were formed in the last three thousand years, when the seaside slope of the ridge served as a pasture for numerous flocks of sheep and goats.
As a result of overgrazing animals ate and knocked the hoofs of vegetation, stripped of land, protection of reinforcement of the root system.

Down on the West side of the hill we rolled the bike up to our special place where every time I put up a tent.
However this is only possible with calm sea. During a storm, a narrow strip of beach is fully filled with waves.

Beaches are generally the best defence of the coast from destruction
In this case, its width should be 20-30 meters.
In places the coastal escarpment dies out - becomes smoother, cut with ravines, overgrown.

In some places, the coast of human intervention in nature it has violated the existing equilibrium and led to negative consequences.

A typical example is Koktebel.
The villagers remember how gradually decreased and disappeared in 1967, Koktebel beaches.
The causes of the disaster are associated with long-term development of coastal gravels for construction and the construction of reservoirs in the ravines and valleys they took the beaches are the main power source to the load.

Now in Koktebel artificial beach filled with gravel, limestone
As a result of abrasion of the gravel significantly decreased the purity of the waters of the Bay Koktebel, deteriorated environmental conditions for the inhabitants of her bottom and the rest of people. 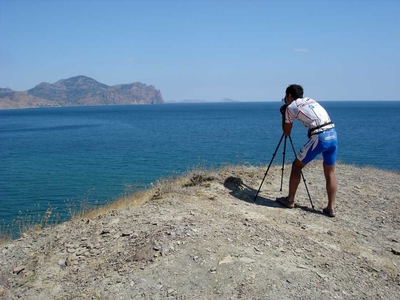 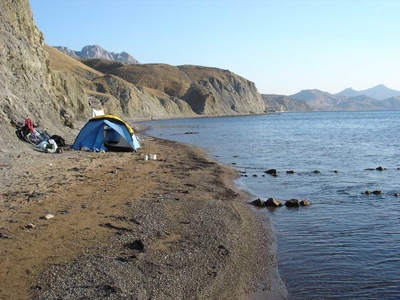 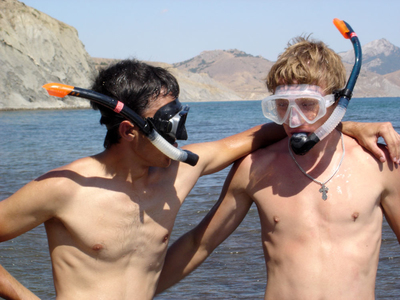 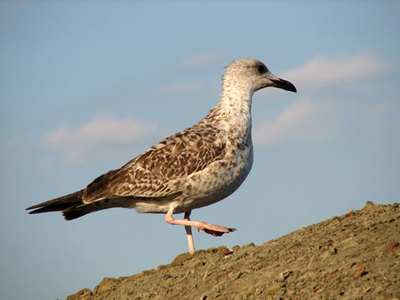 In these places there is something like that.
Near the village KURORTNOE they have built artificial beaches but in addition was blocked by a concrete boon, for the delay introduced Xenia beach.
But Buna besides stand in the way sediment moved along the coast from Kara-Dag to Bay Mooring.
Now all the beaches to the West of the Resort receive less beautiful pebbles from Kara-Dag rocks and minerals.
And then will decline, and destruction of banks will increase.
Nature abhors thoughtless treatment.

Tired of leaving Edward to ohranjati camp Andrei and drove to Sun Valley to shop for food and water.
And the rest of the day enjoying the crystal clear water and wine.
If you swim a little from the shore, the bottom of the sea sarashina algae that have animals. Reiki, crabs and brine.
Just the thing for lovers of snorkeling.
And as you probably guessed to look far for these fans did not have:)

The alarm rang at four o'clock in the morning.
For the canopy tent was still pitch the Crimean darkness.
Prowl of my colleagues went to fight state farm grapes.
Of course no exhortations and appeals to conscience could not prevent their youthful thirst for freebies.
I didn't really tried.

The boys returned within the hour. They are Purley for two Bicycle bags Packed nabycie technical solnechnodolinsky grapes. 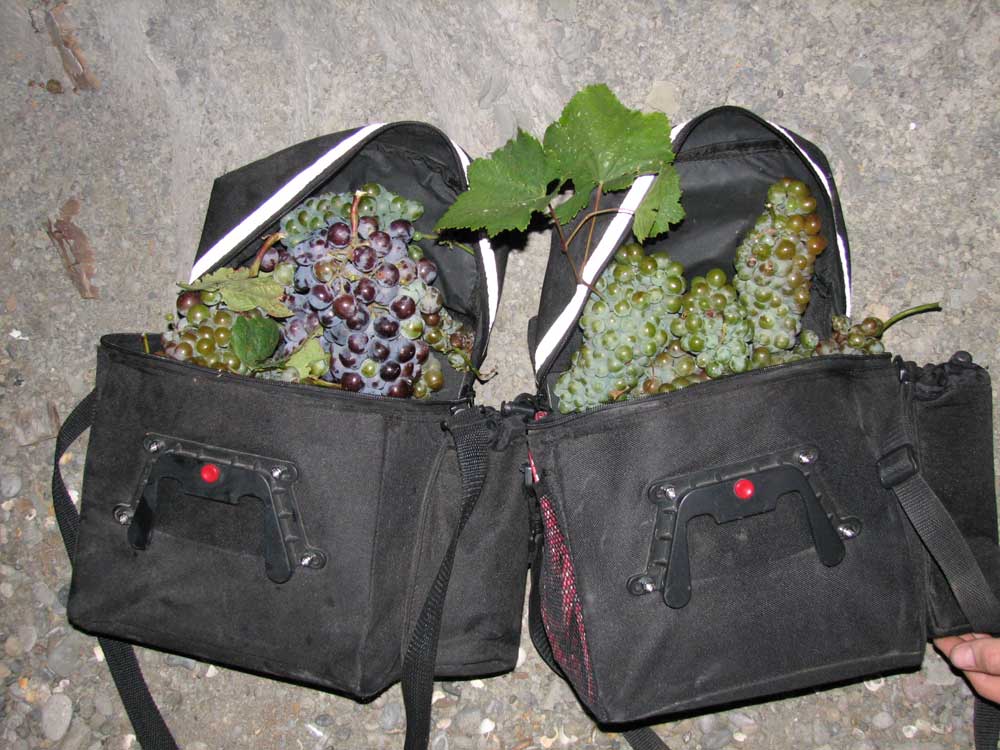 Grape wine is prepared from technical (wine) grapes, which occupy most of the vineyards in the world.
Technical sorts of grapes should be well accumulate sugar at a moderate decrease in acidity, it is easy to be subjected to industrial processing.
Therefore, bunches of grapes of small berries covered with tightly adjacent to each other.
The surface of the berries as if lightly powdered with frost.
This effect is created by millions of microorganisms stuck to the waxy surface of the berries, including a variety of yeast fungi.
Now if the grape crush, the alcoholic fermentation starts, which is caused by the presence of yeast fungi that feed on grape sugar.
Digestive enzymes yeast break down glucose to get energy, and the byproducts of this process are carbon dioxide and alcohol.

Even on a freebie and vinegar sweet, and technical grapes for some reason a lot do not eat.
He is quickly bored, despite the fact that this variety was quite sweet.
And guys this is too soon realized.
If in the beginning Edward and Andrew were set to the maximum gratuity of ampeloterapija, then later changed the point of view and not only not opposed to spending money but wanted to buy it if they saw along the way.
Still sometimes learn better from their mistakes:)

Collapsed like a Gothic Cathedral,
Sticking out unruly teeth
How fabulous basalt fire
Widely uzdowski stone flame,
Of bluish haze, over the sea in the distance
Face the wall...
Not vytsvetet it or brush on paper,
Not myslowice on poor language.
M. Voloshin