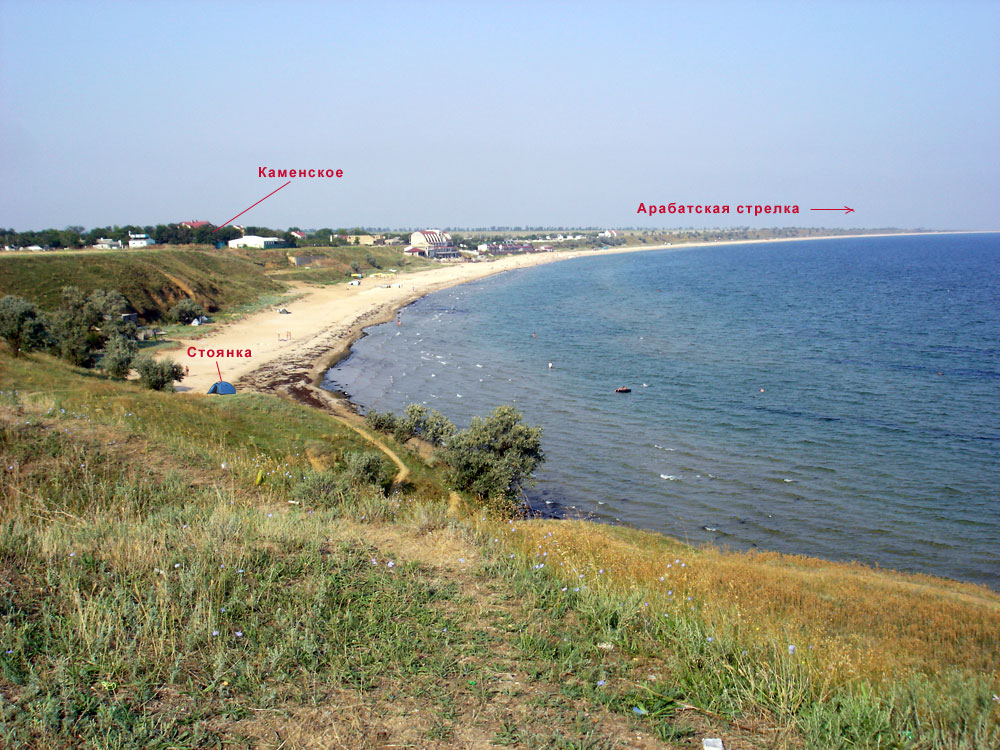 And yet in the warm sea there is a certain pleasure.
It is in vain I called Azov - puddle.
Twenty-eight degrees allowed indefinitely to rinse your teles and shallow water - just sit on the seabed, exposing the head as the morning rays of the rising sun and light blows fresh smelling algae of the wind.

The basics - probably the best place for small children.
Here parents can not worry that their child cold and the whole vacation would be to wind the snot on the surrounding objects.

I got up before anyone else.
And now could from afar with water to observe the beach for our tent, gulls circling above the hill, which was crowned with an old gazebo.
She was the only dominant in the rest, in General it does not attractive panorama.

The consciousness is accustomed to consider the world through the viewfinder of the camera already cropped it, mentally moving from corner to corner and building a proper perspective.

The second of the tents got Edward.
His forever frown and bushy Brezhnev eyebrows gave the necessary military severity in General is still a young face.
Andrew was the most sleepy of all of us.
He could not tear his body from nalezeno per night foam.

After the usual morning procedures included in the set of cyclists, as well as optional procedures, including photographing a telephoto lens any girls in bikinis or without our team went on the road.
Immediately say, that photolaboratories differed basically our captain.
Perhaps that's how he compensated for a forced demonstranti my Spartan alter ego:) 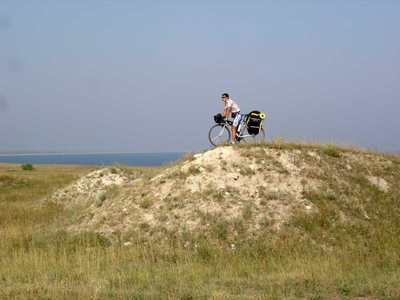 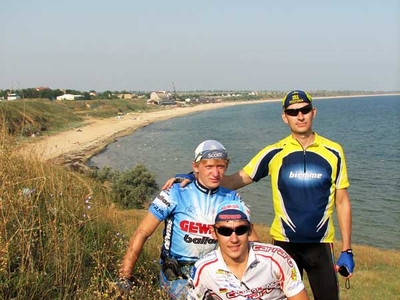 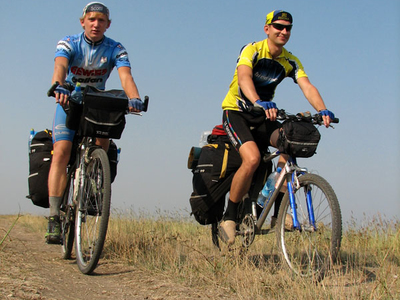 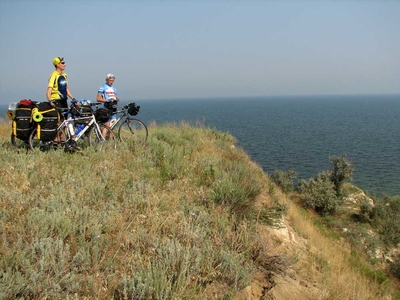 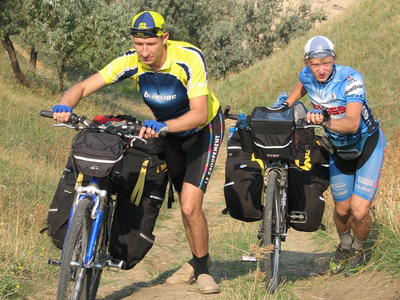 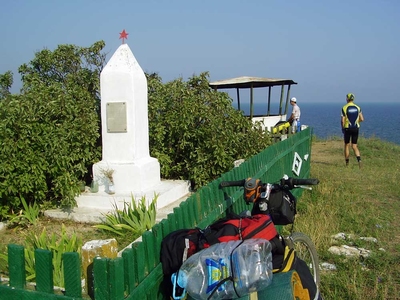 Gazebo on closer examination turned out to be garbage half the public lavatories.
Wanderer has lived long enough to not surprised.
Moreover, the citizens of this planet was familiar to him mentally.
They were the men with their joys and problems, that's only the toilet issue they messed up.

The hill had lovely views of Azov, the village and the beach
Nearby stood a monument to the soldiers who defended them in the years of the last war.
Certainly not the last role in this was played by the quarry - it's beautiful sanctuary.

Amanaska quarries stretching along the coast ten kilometers, and even more.
And what area is covered all the moves - no one knows.
The land in the district Kamensky hump around failures.
From time to time, crumbling earth, and the top layer of stone, revealing a dungeon.

One of such failures was opened to the eyes when we drove a kilometer along the shore.

There is information that was travelers, down here under the ground to the adzhimushkay quarry!
They say that it is possible to Opuka underground tunnels to get to.
Maybe it's a course tale, but the legend on the forced labor of convicts, exiles makes us believe.

Base Akmonajsky quarries associated with the company of soldiers, something progrevatsya Queen Catherine,who was exiled objectionable here - in the Crimea.
And the exiles began to build a house of stone, which was immediately extracted.
And later became Akmani in place of slave labor, sent here gang.
It's their hands hollowed out miles of tunnels.
Armenische of stone were built in Feodosiya and many villages around. 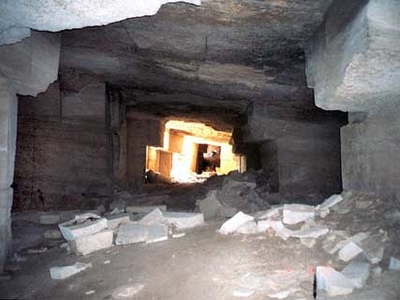 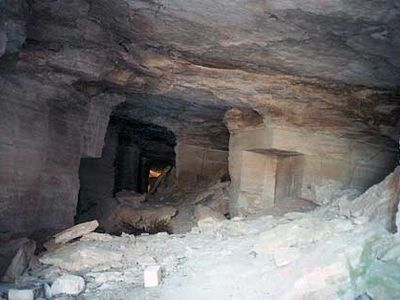 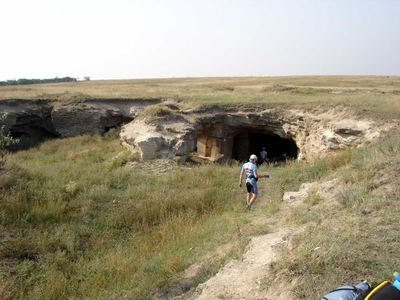 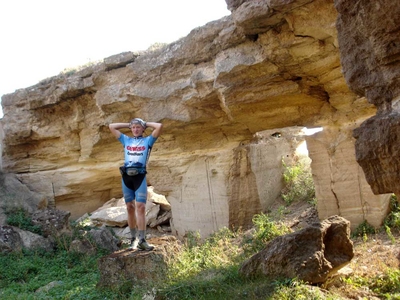 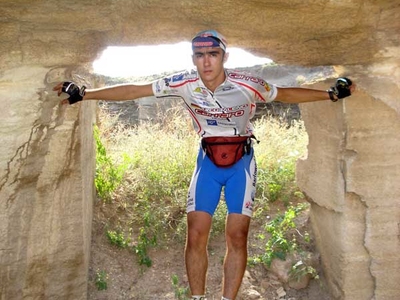 The quarry is now abandoned and has become a Mecca for explorers, fans of role-playing games and other subterranean adventurers.
As in the dashing 90s, then allegedly hiding from the police gang Babak, a native of the city of ShChelkino nuclear scientists, terrifying the locals.

Originally we were driving almost on the edge of the cliff above the sea.
The track was away, but I wanted time to see to your left the basics.

As a result, this desire has led us to a dead end.
Huge quarry cut short this venture.
To overcome it with a heavy load is not wanted and had to go back and make a small hook.

The coastline from Kamensky to Semyonovka are dotted with low cliffs and intimate coves.
The place is deserted and surprisingly suitable for privacy.
However the lack of water and vegetation can someone push. 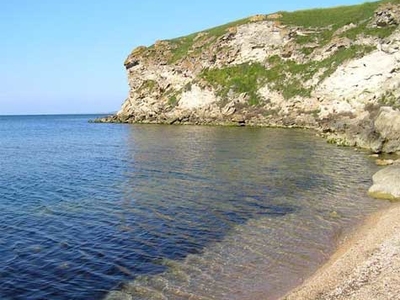 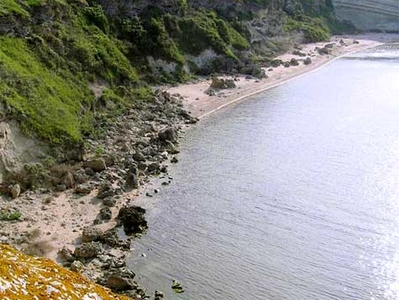 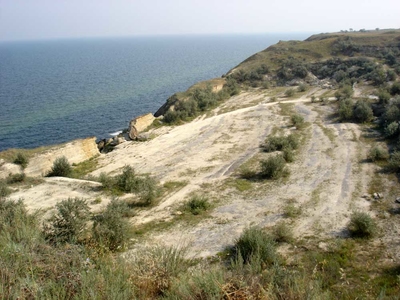 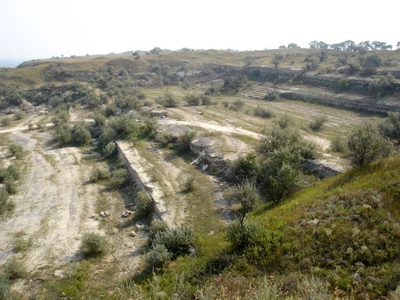 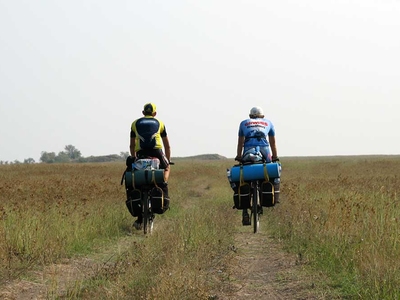 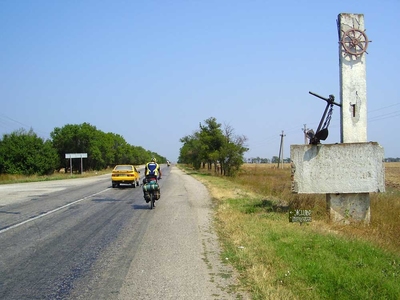 In General, it is a Paradise for wildlife tourists, nudists and the like do not like a crowd of people personalities.
I would love to stuck here for a few days.
But our way has just begun and rest at the very beginning it was like that with his hands.

Further along the coast several settlements. Even villages not call them - rather a fishing farm.

We never went back to them and straight went to Semenovka.

Where what is gained in the well of the first water house.
The owners assured that it is excellent.
But drink we did not become - poured along the way.
And what to do! Here are sybarites:)

From Semyonovka starts on the asphalt trail to the village of mysovoye, located at the foot of the Kazantip nature reserve.
Without further ADO - there and waved.
◄ Prev
Next ►

Maxim, wiping the sweat from his dirty forehead with a dirty sleeve, slowly walked over and stopped at the edge of the dark narrow gap, hidden in the grass.
The crack was deep, impenetrable, she was carrying cold and damp, nothing could be seen.
Towards pulled by draught.
The air was damp and filled with the smell of mold