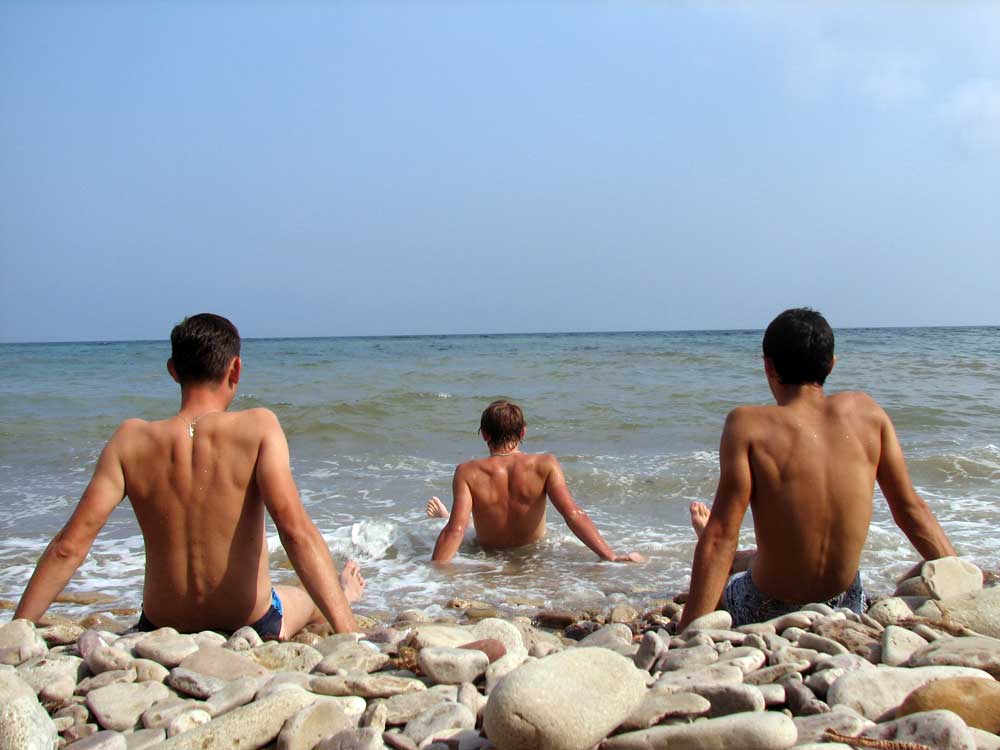 Western slope of the ridge Tepe-Oba is a Paradise for daunhillu.
Here it is possible to be dispersed properly.
But we had to be cautious not to grobanites at full speed and not collect the bones then the crevices.

Dvuyakornaya Bay in all its glory is spread before the eyes.
Locals call it the Bay of Biscay because there are frequent storms and the wind blows. 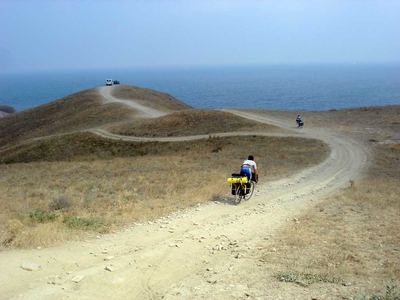 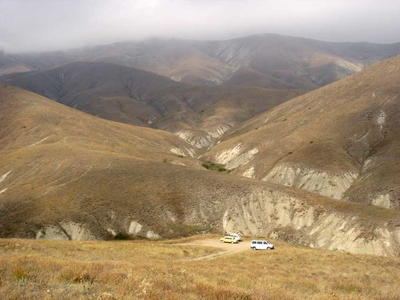 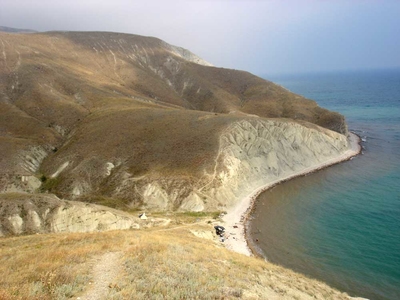 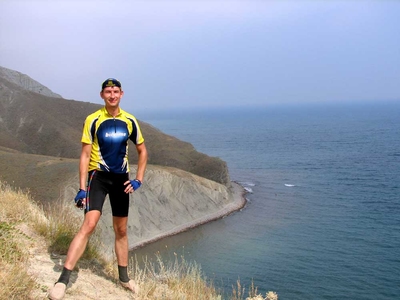 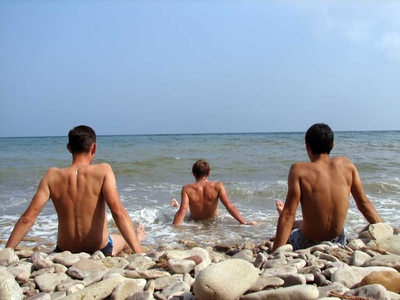 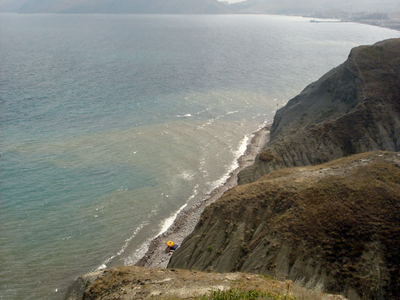 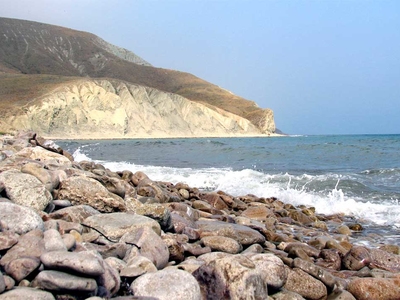 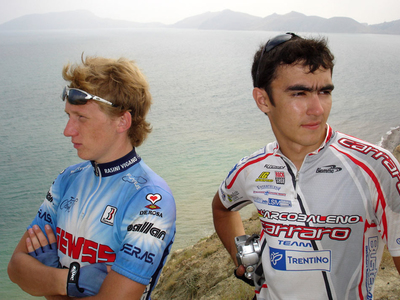 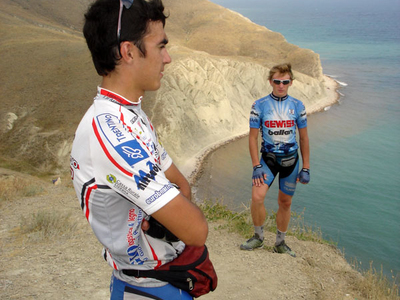 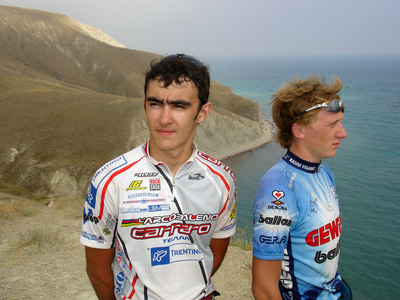 There are two versions of her name.
The first is a romantic.
That supposedly had to put the court on two anchors or they could not resist and tore them from their seats.

And the second is prosaic.
In the early 20th century near his estate on the opposite Bank from him Cape merchant of diamonds was founded by Mine plant, in the coat of arms which depicted two crossed anchors.
The locals began to call the plant "Dvuyakornaya", later the name was transferred to work at the factory village and the Bay, on the shores of which it was all located.

In the valley of the Bay there are several ancient razvalin, including two bridges.
All that remains of the presence in Crimea of the Genoese.

The path from the ridge gave way to a beaten dirt road. And we got to the cliff above the Bay.
Oh what a pity when there testroot all recreational facilities.
Already erect hotels and boathouses. The truth is closer to Ordzhonikidze.
There the shore is already not rocky, and flat.
Can certainly crisis a little will stop the invasion of civilization into such a beautiful wild place. 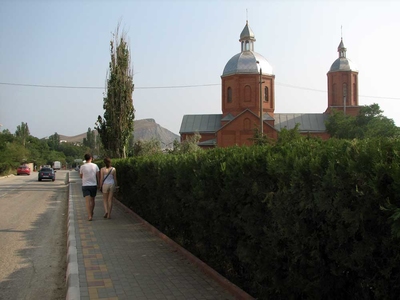 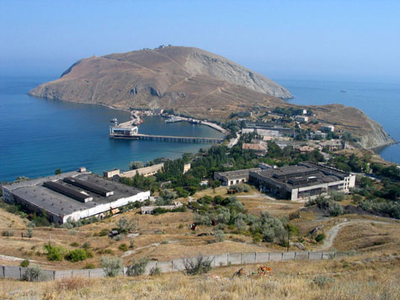 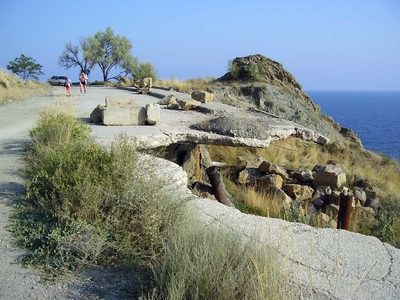 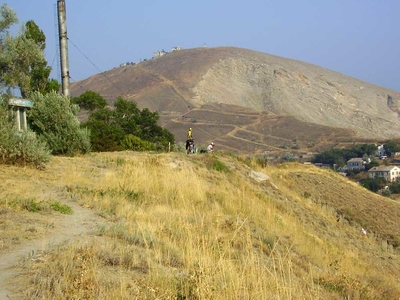 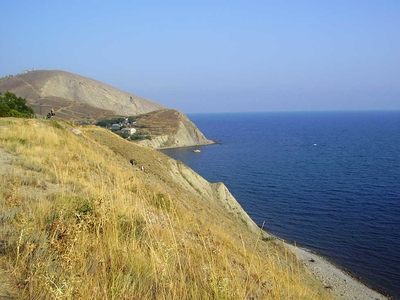 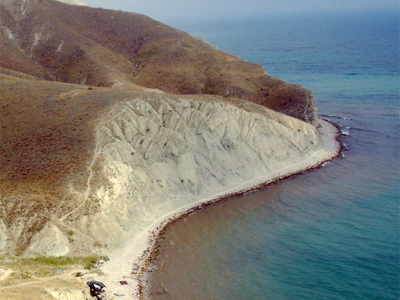 Edward I loved the standard /images - such as "me and Eiffel tower", and argued constantly about it.
He is from Rinat picked up the basics of photography and now trying to artistically arrange objects in the frame.
And I was forced of course.
Variety of cheese.LTTE came out really good.

The case ended up being leaving their bikes with the Luggage upstairs we went down to the sea and spent a few hours on the rocky beach, trying to swim in a stormy Black sea.
Surf desperately clobber our tanned bodies on coastal large boulders.
A certain number of bruises on the body - as a Supplement.

Wandered around nudists. Naked girls is not indifferent to lens captain.
He filmed in this campaign a large amount of nudity, the benefit of zoom allowed.
But for reasons of self-censorship I cite in this story only the most innocent of them:)

To spend the night on a rocky beach in the vicinity of the rough seas it was impossible.
And I thought that the city of tobedestroyed we will shelter some sort of part.

Right from the Ordzhonikidze are the building of the branch of the Sverdlovsk factory "Gidroapparat" collection of missiles "water-water", "water-air", "water-land".
It is located under the ground. Early was strictly guarded, and now probably abandoned as well as the torpedo factory on the Cape-Kiik Atlama. 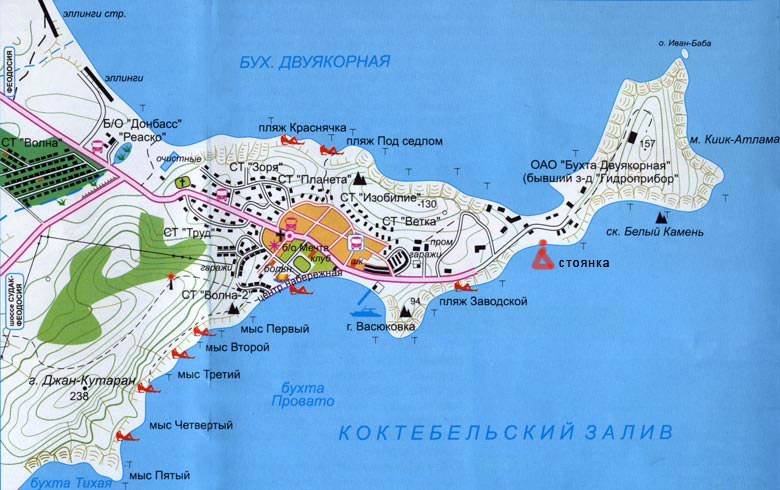 The city has changed in the few years that I've been here since 2003.
Then it was a quiet backwater place, every corner of which exuded the seventies of the last century.
Now it was all different.
Especially shocked at the number of tourists on the local beach.
Still some time ago, imagine this was unthinkable.

In Soviet times, it housed a top-secret strategic site for the production of homing torpedoes and optics for submarine factory "Gidropribor"
And the village staff appeared beside him.
Since the construction of the plant Ordzhonikidze becomes closed to outsiders.
And the local beauty could enjoy only employees "Gidropriborand" well, maybe close relatives.

And the unearthly beauty of the Cape-Kiik Atlama, fabulous serpent stretched out in the sea, really defies description.
Enough to climb one of the hills surrounding the city.
-Kiik Atlama translated from the Crimean Tatar means either "jump wild goat", or goat island.
On both sides of the Cape for two unspoilt coves with clear water - Dvuyakornaya(where we sunbathed) and Provato (part of the Bay Koktebel)
Provato - the so-called port, the former here in the middle ages, when contended trade of the Republic of Venice and Genoa. 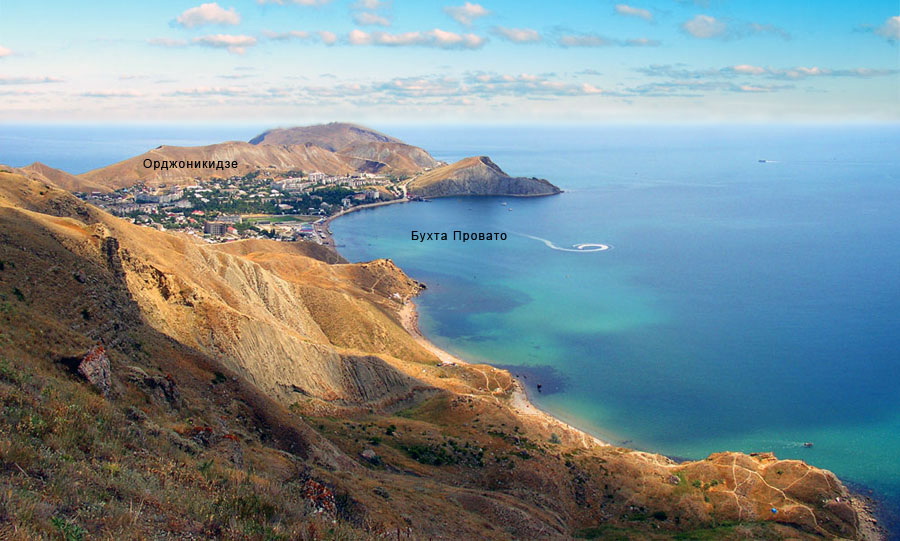 The city was named in honor of associate of Stalin and Grigory Ordzhonikidze, called Sergo.
Which, like many followers, ended his life in 1937.
Whether was shot, or shot himself.
To the Crimean city of no relation had not been here ever.

And because local residents put forward the initiative about change of name.
Someone wants to restore the Roman historical name Kaldager
But there are more exotic suggestion is to call him a Zurbagan.
Alexander green has repeatedly visited these places . And in the time of the Genoese - is a "city and port", where people from all parts of the world came to the ships.
If the idea is approved - it will be a great gift to the memory of the writer.

Proskynesis along the promenade chock full of downtrodden, half-naked individuals of both sexes, and realizing that to stay for the night here nowhere, we drove out of town on the only road leading to the torpedo factory.
The closer to the plant Karabelas up the hill road the more clearly was that the plant has long been abandoned.
The scattered plot and gaping rotten hole on the blue sky background.
And nobody cared to fix it.

After the turn we saw the checkpoint "Gidropribor".
At the end 1940-x of years the place was favored by the Soviet military-PRmillennim complex is not accidental.
Ideal conditions visual and radar observation, the proximity of Feodosia train station and the port, availability of roads, towering over the sea for tens of meters mountain high has created ideal conditions for the organization of a military facility in the era of the arms race the two superpowers – USA and USSR.
Unique plant created engineering and construction talent of many specialists and the work of the black sea fleet sailors. 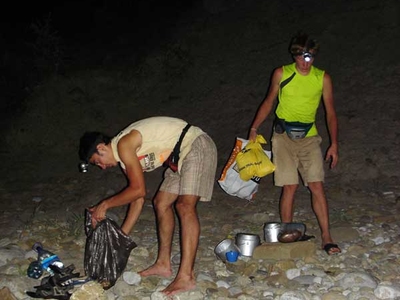 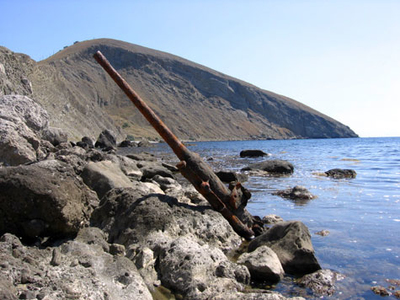 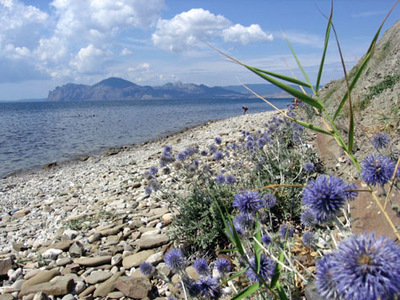 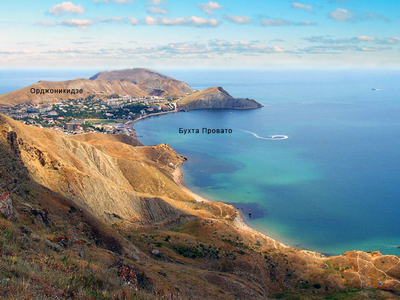 With the collapse of the Soviet Union, the plant lost its purpose and the village ceased to be sensitive.
In the post-Soviet time the plant almost completely stopped the manufacture of torpedoes and optics for submarines and tried to enter a peaceful life with production for processing vegetables and fruits.
However, the conversion failed.
Hard still beat their swords into ploughshares.
The shadow of war, reluctantly retreated from these places.

The plant was abandoned.
Recently it was converted into a Corporation and sold to some private firm.
Perhaps now there will be a resort for the Nouveau riche with Parking for yachts on the site of a small factory the harbour.
So that the fence and gate with the guard more useful.
Unlikely to do something for ordinary people.

In General, the battle for land in this district is serious.
By hook or by crook try to get a coastal area in private ownership with the right of superficies.
Local little doubt that there will begin to build and sell cottages for lovers to live and relax in solitude, looking at the soft tints of the mountains
This also applies to Ciiic-Atlama and the ridge Tepe-Oba, and even the beloved Fox Bay.
But about it later.

Entrance of the plant located on the hill. And the territory of the plant in the valley.
At the bottom of a rocky beach.
Down on which bike is almost unreal. The slope is quite steep.
But the alternative for the night was not.
Withthe sun was setting.

The captain immediately took the initiative in their own hands.
He agreed with the guard at the checkpoint that we leave her bicycles with backpacks at night.
And it is free. However we then gave her a chocolate. All work must be paid:)

Taking the necessary for food and sleep, we went down to the sea.
Rocky and pebbly beaches, these bays are very fond of divers - no turbidity from the sand, the depth is different, the fauna is richer than in the bays of Sudak or the New world.

Along the shore you can get past the torpedo factory and around the Cape-Kiik Atlama.
However in some places a narrow strip of beach pribegaya to the cliffs eroding and need to swim.
In the most extreme parts of it in the sea lies the once chipped a piece of the Peninsula, now called island Ivan Baba.

With him is a legend that there once lived two hermit – Russian and Tatar Baba, who ate what was given to them from mother nature.
Their cabin was burning candles, the light of which was visible through a little window to mariners and served as a lighthouse.
When Ivan died, a Woman on his grave was erected a chapel...

With Kiik-Atlama really great and Tepe-Oba and Koktebel Bay.
Hence the Karadag is visible at a glance. He is black with a dark lump on the horizon. 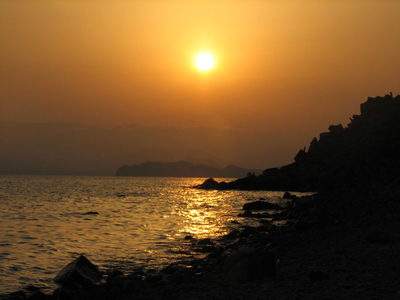 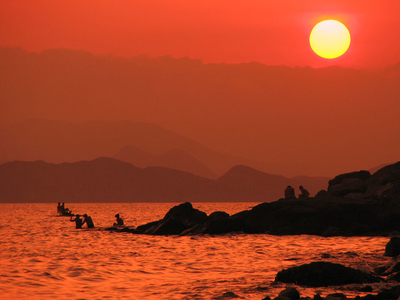 By sunset the people had split up. We ate in the dark.

And slept without a tent in sleeping bags.
Our bodies are fancy repeating the curves of the pebbles under the skin.
Noses were from the cold with the fresh sea breeze.
Eyes blended in with myriads of stars littered the night sky.
And heart pounded in unison with the rumble of the sea.

The ancient Greeks said that the desire itself is doing.
The strength of the desire, dreams can turn a life and change a person.

We got here not by accident.
And I distinctly felt like Zurbagan changing me.
Can be make a little cleaner and better than I was before.
◄ Prev
Next ►

...I walked around the city; he grew up, changed a few character of the streets in the direction of a banal stamp of civilization — electricity, colorful posters, large houses and leisure areas , but in General have not lost the originality.
Many shady gardens, an annular arrangement of narrow streets, almost devoid because of this perspective, the unexpected, steep, descending and descending the stone stairs leading under the dark arches — did Zurbagan intimate...
A. green "Surahansky shooter"