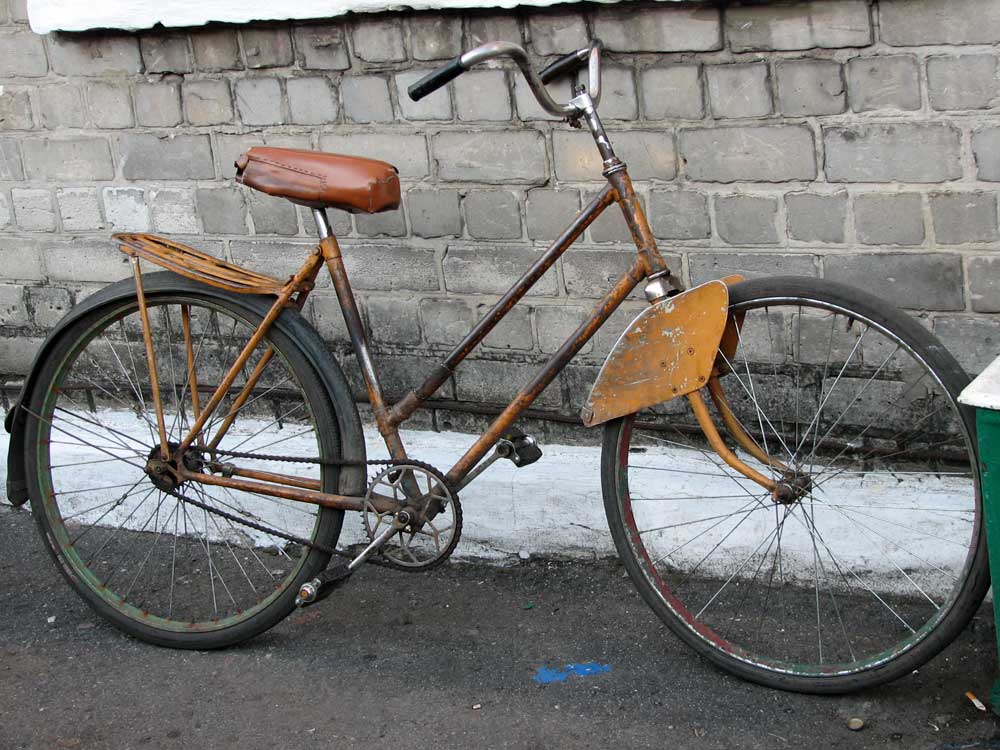 A thick conductor literally came later.
It is apparent how heavy it was.
Half of the road he had spent in the wagon the toilet, pouring himself water from the tap. And the second walked down the corridor, wrapped in a wet sheet.
Heat a little towards the evening abated, but not enough to feel comfortable.
Duhopodemnoe seat in trains of different caliber was coming to an end.
Crimean train was arriving at the start point of our Cycling trip. 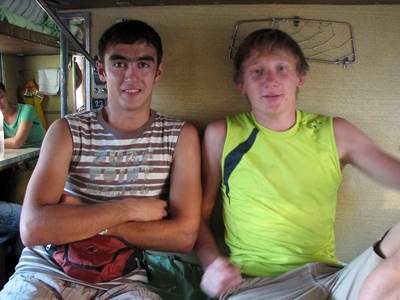 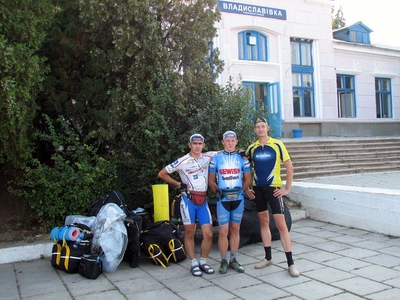 Six hours ago, three Marines disembarked in Dzhankoy.
The August sun was beating down mercilessly. Wagon torture was coming to an end.
According to the previously approved plan had the last stretch to the South of the local railroad tracks. We had time between trains.
Cost to use it as much as possible.
Get drinking water and to reinforce the exhausted instant noodles organisms.

However, all did not go as planned. And procurement had to be postponed in time.
Treacherous surface inhabited the Peninsula has prepared a nasty surprise.
Captain chachu had passed and hundreds of meters on his bike as he had to dismount and for a long time.
Blame the Crimean thorns-lambs, as they are called locals.
The waste product of any shrubs or trees.
Fantastic creation of nature!
It is a natural anti-hedgehog in a nutshell.
More precisely protivoparazitarnae.
Small ball studded with scattered steel-hard woody thorns. 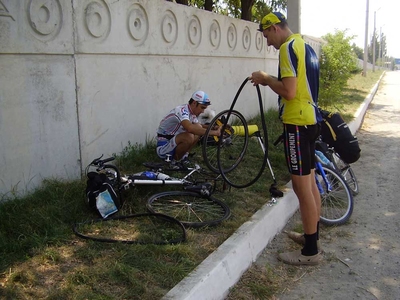 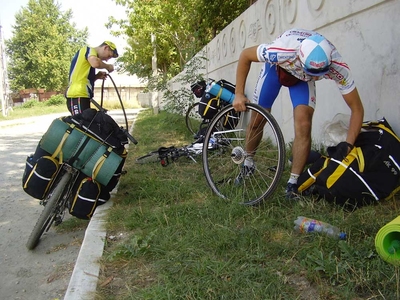 These lambs are just riddled with narrow chambers road bike Edik.
Had to hang for a while right at the railroad tracks.
Honestly I do not remember that in his previous tours we suffered so much from the Crimean thorns.
Maybe we then just lucky, and maybe they will be born every year in such numbers:)
The beginning who want to unsettle and Edward became grim.
The arrow of a barometer of his mood swung in lightning zone.
Right now I begin to whistle: "calm Down, mom!"
But there is no cost:) 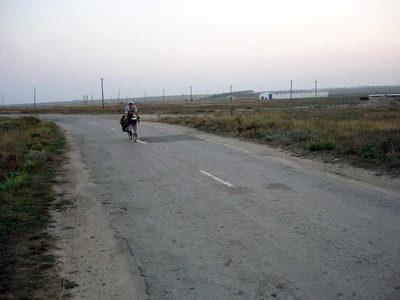 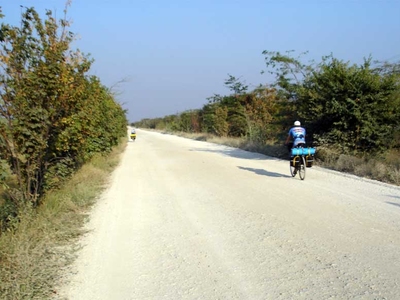 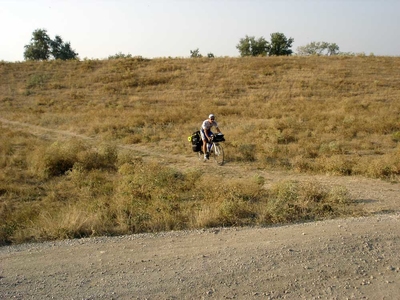 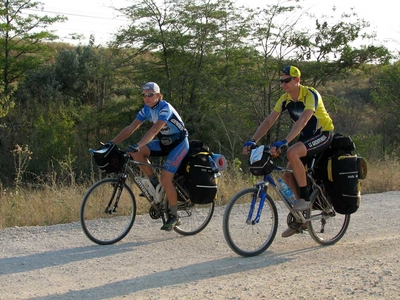 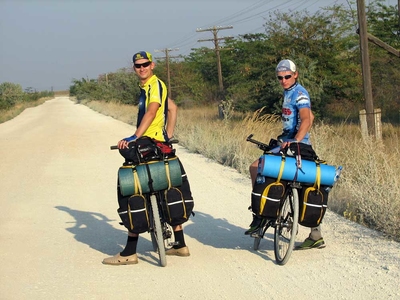 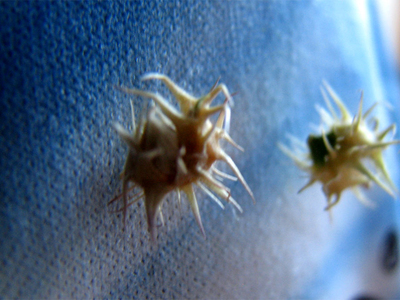 Vladyslavivka was a quiet provincial Crimean village.
It was surrounded by the Crimean steppe.
Dusty broken-down priming curled in dry grass and rare shrubs crooked.
Near silver sleeve of one of the irrigation channels, in which local children willingly dived and splashed around.
Stop by and experience firsthand the intermolecular adhesion stealey channel of water, we did not. Time fled by evening.
A Crimean night falls rapidly.
At least much more than the hands and heads of weary travelers

To the shore of the sea of Azov had to drive about 30 km.
Honestly, despite the bleak landscape, the way I liked it.
Sometimes it was dusty earthy, and sometimes passed into the pavement.
But her solitude and some inner cheerful enthusiasm brightened the monotony of the surrounding traffic.

The guys sprinted, as expected, ahead of their 28ми inch wheels.
The old wanderer of course a little promstal:)
On roadside trees and bushes Tami there grew all sorts of southern fruits and berries of unknown origin.

Edik and Andrew is not embarrassed by any lack of knowledge in the field of botany nor the survival instinct inherent in all living things.
They happily began to fill the bellies of this colorful plant food.
And my admonitions and warnings - not least the fact that I don't know for sure, of course was seen as Nudes old man.
Every time I wonder how the youth does not value nor health, nor life, naively believing that it is given foreverand.

And secondly , even though Crimea is not the Amazon jungle of poisonous plants are found here.
Dangerous and poisonous plants in the Crimean woods quite a lot, so thoughtless pozhevyvanie blades of grass, rubbing the leaf between his fingers, inhaling the aroma, tasting of bright appetizing fruits if you are not sure what it is, it might end very badly.
Here are just a few typical examples.

Tis is a very beautiful wood.
It grows very slowly and, they say, can reach 4 thousand years.
Especially interesting are his "bumps" which are more like red berries with a seed inside.
For coniferous trees such results are not typical, so tis called berry.
Poisonous needles, twigs and wood of yew.
Themselves red "berries"-preselenci harmless, but it is better not to collect them and try not to taste.
Lethal action of the poison of the yew, wrote Pliny the Elder and Julius Caesar.

There were cases when tourists mistook Raven's eye blueberry, though the blueberry he does not like.
Bush crow eyes Matures only one dark blue, almost black berry that is why it is similar to the eye.
Grows in shady woods in moist soil, thickets, on slopes of ravines and forest edges.
All poisonous plant parts: berries, leaves, roots.
Fortunately, Raven's eye is easy to remember 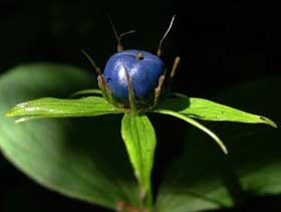 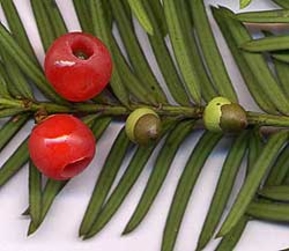 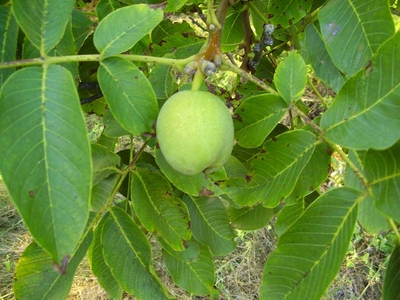 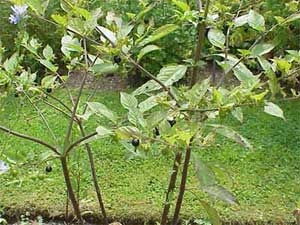 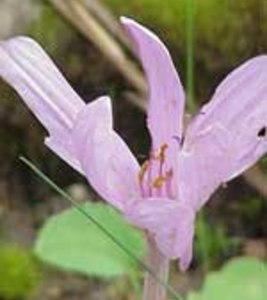 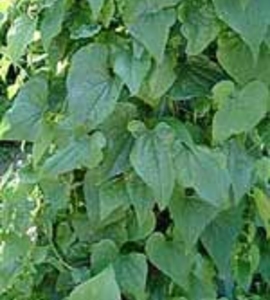 Belladonna - cherry wild.
This is a very poisonous plant.
Her dirty-purple flowers and dark berries, like cherries, with purple juice.
In children severe poisoning cause 2-3 berries.
Belladonna contains several alkaloids, including atropine, named after the Greek goddess of death atropy, the eldest of three paroK — goddesses of destiny.

Atropa scissors cut the thread of life.
Atropa is usually depicted with branches of cypress (the tree of the graves) on the head.
The name belladonna is from the Italian "bella donna" – beautiful.
Medieval ladies used belladonna: dripping its juice in the eye.
Atropine, as is well known, dilates the pupils, the eyes become shiny and dark.
However, almost nothing is visible...
In 1813, Napoleon's soldiers were poisoned by the berries of belladonna in the Parking lot near the town of Pirna in Germany, and many of them died.

Colchicum, or the hibernation house, you can find Him in the forest glades of the mountain Crimea.
Blooms in late August and September.
On its thin stalk appear b petals light purple or pink.
Colchicum shadow in any case should not tear hands.
In his juice, scientists have counted up to 20 toxic substances!
If that happened, then the victim begins to feel a strong burning sensation in the mouth, nausea and fever.
Need urgent assistance of a doctor.
A decoction of the Colchicum is a strong poison.

Tamus ordinary or Adamov root Tamus prefers shrubs and light forests.
Stem climbing plant reaches lengths of over 4 meters.
It has small greenish flowers on long stalks, covered by large leaves.
Poisonous is the fruit of tamus, which is a large berry red.
They lead to food poisoning of varying severity

Thank God this time all went well:)
The berries were edible.
However, such behavior put me in a different sort of reflection, chaotically jumping from the fact of jump to ways nejtralizacii.
In the circumstances I stayed quite a long time, mechanically pedaling.

The village of Kamenskoe (Akmani) popped up from behind a turn as the devil from a snuffbox.
It is located on the the shore of the sea of Azov, near the Arabat fortress.
The name corresponds to the local fishery thrived here some hundred and a half years ago.
Just steps away from the village, and in some places they say in the village, directly under the residential buildings are Amanaska quarry.
The whole underground part of this area is dotted with endless mazes of man-made tunnels.
Since ancient times, extracted in these quarries the stone is white limestone, was used for the construction of most buildings on the Kerch Peninsula.
Amanaska quarries yield only Adzhimushkajsky - near Kerch.

The wheels of our bikes stopped at a high cliff and eyes were opened to the vast expanse of the warm and shallow sea of Azov.
the North-Eastern side of the Black sea basin, with which it is connected by the Kerch Strait with a width of 4.2 km.
This is the most shallow sea in the world,its depth does not exceed 15 meters.
On the biological productivity of the sea of Azov occupies the first place in the world.

By distance from the ocean to the mainland of the Azov sea is the most continental sea of the planet.
Water contains very little salt.
For this reason, the sea freezes easily, so before the advent of the icebreakers it was navigable from December to mid-April.

Below is the long sandy Bay with a beautiful beach.
The sun rolled over the horizon.

Without further ADO we descended into the water and quickly set the tent ran to bathe.
There is no greater pleasure for a hot ride and the heat of bodies.
However the water is not very refreshing. 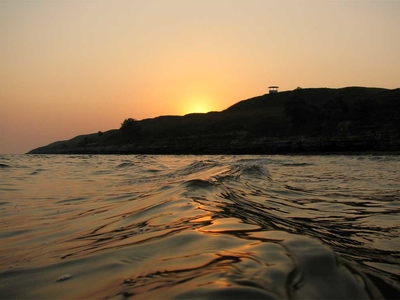 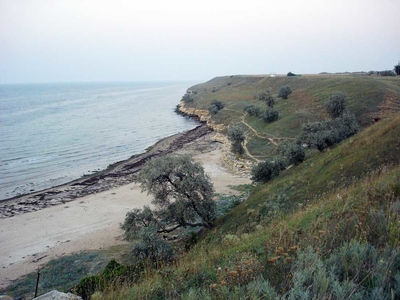 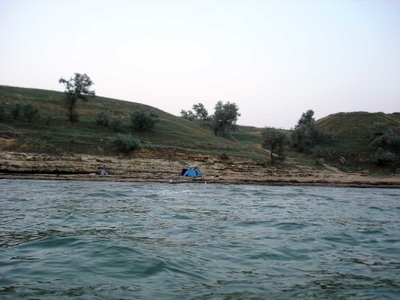 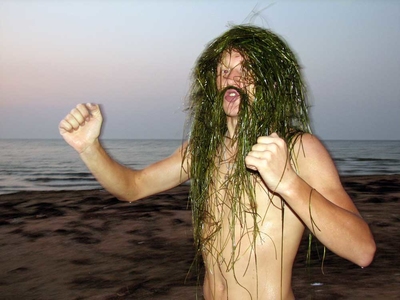 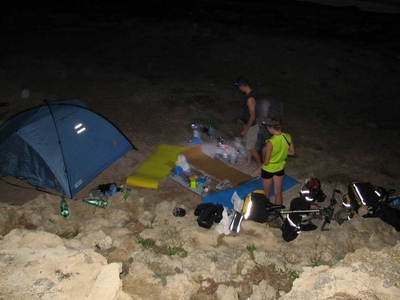 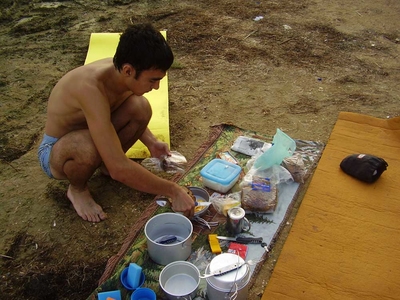 Edward brightened considerably by the end of the day, though, and didn't show it.
And wonder of the sea is to blame or is still eaten by the roadside berries.
And Andrew, as befits a Progressor, all the while blissfully smiled and only black eyes shone from under the burnt whitish eyebrow.

Somewhere in the distance was construction some boarding house.
The people were very little.
Surprisingly quiet and still undeveloped tourist place.

Beach smooth arc bent in the direction of the Arabat spit.

According to scientists, this is a narrow spit extending from the North to the South of the Peninsula appeared about 900 years ago, thanks to the waves and the innumerable shells that can flourish in the sea of Azov.
Every year in the warm waters of Azov they accumulate about 25 million tons.

Here, too, the refraction of the atmosphere, as on Saraksh, only in the horizontal plane - Mac SIM was aroused.
- Here, you blockhead! - The wanderer fatherly patted brown hair Progressor Is not refraction, but only a bending of the land in Arabat Bay. What do they teach you at home!
The captain thoughtfully chewed his sausage, sitting on the sand.
It was obvious that his own stomach had troubled him much more than refraction.
◄ Prev
Next ►

He passed a small cool bog, have broken through the shrubbery and was on the road, on the old cracked concrete road.
The air was hot and thick and smelled of dust, old iron, crushed vegetation, life.
Nearby were overgrown with bushes sticking out of something as dull crooked trees.
Everything was gray, dusty, and flat.