Cycling / In search of the Moomin-Dole / For a week, until the second we'd stayed in Komarovo

For a week, until the second we'd stayed in Komarovo

Chapter in which hemul pulls the rope, and Mumla coddles bodies in the waters of Hayari 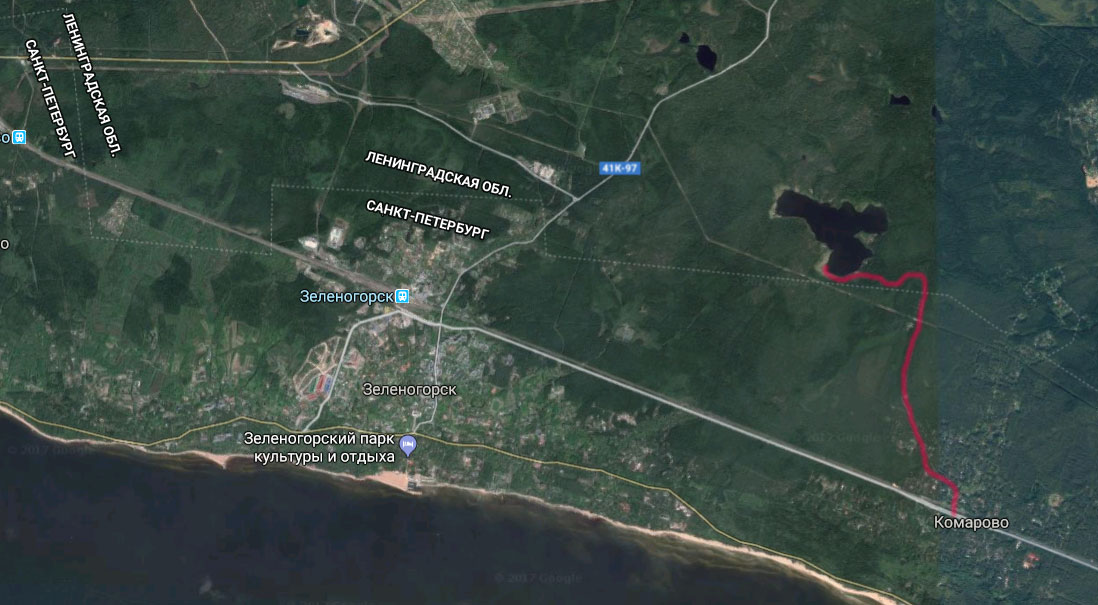 Needless to say how exhausting two-day train trip in the summer.
Stuffy cars, dozens of sweaty bodies of men and women and exhausting feeling that nothing depends on you.
You're the hostage of a situation where you have only one right - to be patient and wait.
A huge country Russia is nothing better and more affordable may not offer its citizens in terms of movement.
So puff slowly, like 100 years ago, at approximately the same rails about the same compositions.
Here and takes hundreds of passengers in cramped dungeons antediluvian carriages whose design has not changed for decades, exhausted from the heat and forced idleness, wasting your time and smearing the precious days across the expanses of the vast country.
If not the 21st century.

But there are practically no alternatives. The aircraft is unreasonably expensive for the General population.
And just a threat in recent times.
The bike is also not too convenient to carry in them.
It turns out that the road eats up the lion's share of your holiday.
The days that you could spend a lot more benefit for themselves.

Moscow St. Petersburg train station-travelers were met with sunshine and many friends.
Warmth and responsiveness is a hallmark of the residents of the Northern capital.
Simple human feelings do not freeze here at the cold Baltic wind.

Once again I want to thank the Light Solovieva for help in obtaining a Schengen visa.
The Moomin-Mama never fails to support the inhabitants of Moomin-Dole
"Best mom in the world! Always ready to accept a new batch of friends , to feed, to caress and put to sleep the whole Horde..."

Because the procedure of obtaining visas, though simple, but extremely costly given that the one hundred millionth country only 2-3 points where you can do it.
And the inhabitants of the great from Moscow and Peter cities to obtain a visa in Europe means to waste a lot of time and money.

Sometimes it seems that our government is doing everything that individuals be uncomfortable, and at times even humiliating to live in it.
Getting used to not notice it and only going to travel, see the most keenly all the nonsense and ugliness for that long zamylenny look. 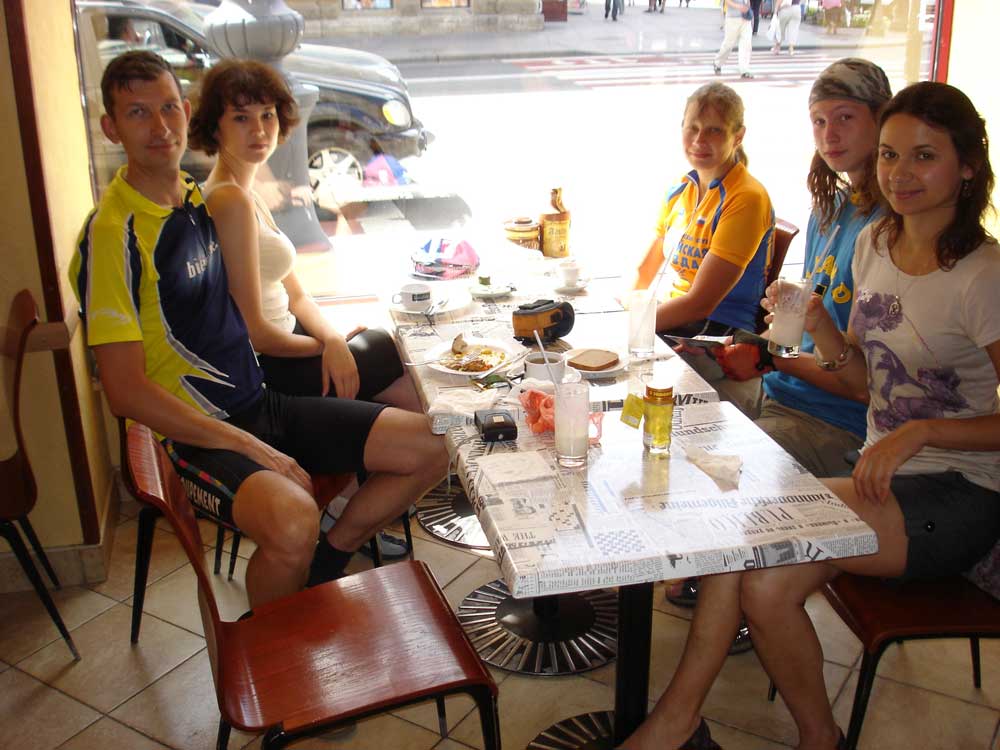 We gathered at a small café to exchange credentials with certificates and enjoy the short moments of the meeting after a two-year separation.
The delay did not have much time.
Our companions Andrew and Julia were waiting for us at home.
And we agreed to go to Finland the same day.
Ilya Stroganov kindly agreed for us to transmit to the starting place.
And his brand new Peugeot for half an hour has served as a beacon that we put on bicycles St. Petersburg miles.

Surpise was the fact that Julia Bogdanova sick - back problems
And could not go.
Then Andrew decided to come with us, not to waste a short vacation, and his girlfriend in a couple or three days had a chance to catch up already in Finland on transport.
Nevertheless, the check out is deposited on the next day. 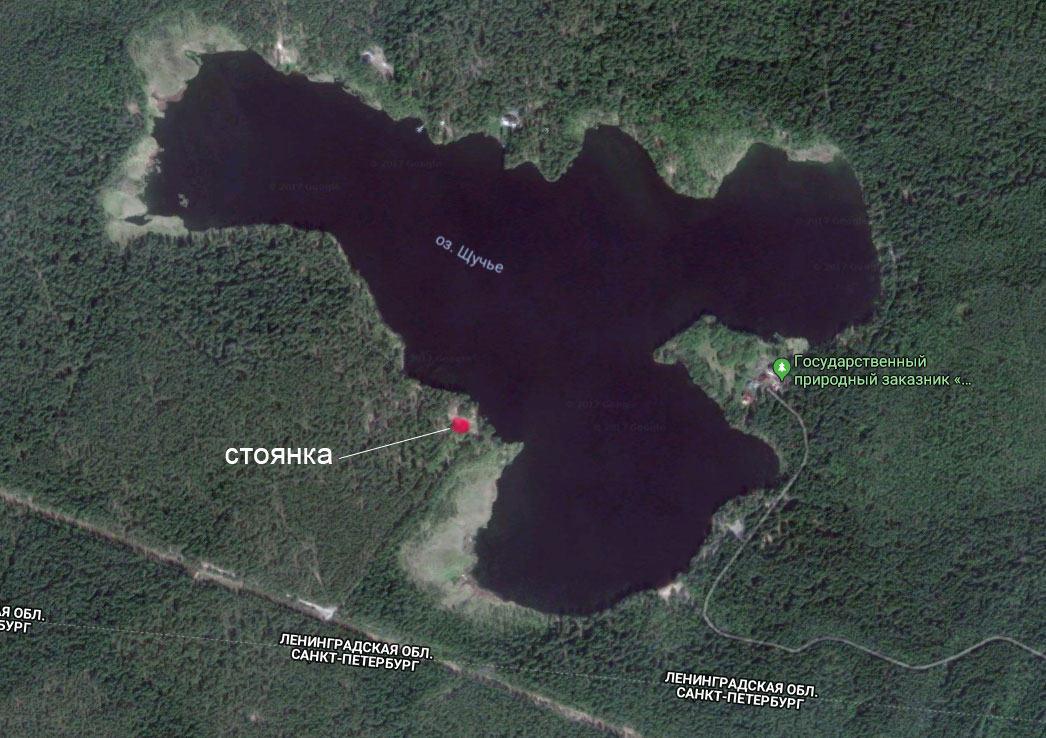 In the meantime, I accepted the kind invitation of Ilya Stroganov to spend the evening with him on the shore of lake Schuchye, situated near the village of Komarovo.
There Elijah was to prepare the ground for the sports day in his office
Its volunteer force has appointed a solo entertainer, apparently believing that the famous cyclist can not only programming, but also inspire the team healthy pastime.

Sunday train per hour domchal us to Komarovo.
It was very interesting to see this "edge of the earth."
Although Sklar sang obviously about the Gulf coast near the village, but the place where we were going was no less remarkable.

During the Swedish rule, these lands were the core of Royal Park Hukanui.
Forest land used for hunting. The game was delivered to the Royal court.
And in the nearby of the same name the lake was infested with pike, roach and trout.

Then this territory became part of the Russian Empire.
The place was quiet and dull and beginning to develop rapidly only after the construction of the railway in the late 19th and early 20th centuries.
It was built many villas of famous and rich people.
So for example, before the revolution, there lived a jeweler Karl Faberge and ballerina Mathilde Kschessinska.
The settlement formed around the railway station received the name of the Raivola

After the October revolution of the 17th, which brought the independence of Finland, the Finns settled here.
But not for long.
The migration of residents took the form of tragic farce.

At first they were completely evacuated by the Finnish authorities to ensure security in the period of aggravation of relations with the USSR in October 1939.
The result of the Soviet-Finnish war, the village was again ceded to Russia.
In the spring of 1940 in the village of Raivola came immigrants from Leningrad.
In June 1941, the Soviet population left the Raivola - the Great Patriotic war
After the war, the village of Raivola the newly adopted Soviet immigrants.
And their descendants while not going anywhere.
In Soviet times the village was pereimenovali in Komarovo(in honor of scientist-botanist) 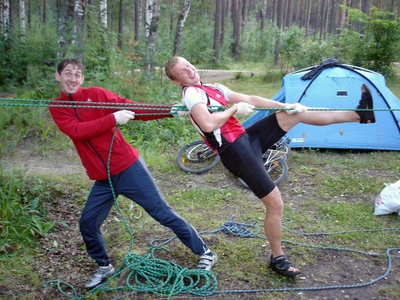 The place is really very beautiful.
But the famous not so much nature as people who vacationed here and were buried in the local cemetery.
Poet Anna Akhmatova,academician Dmitry Likhachev,writer Ivan Efremov, neuroscientist Natalia Bekhtereva
And from the contemporaries, - actor Andrey Krasko, composers Kurehin and Reznikov.

Past cozy cottages raspashnyh through coniferous forest track leads to the lake Hukari(Shchuch'ye)
There on the shore me and my military friend was already waiting for Ilya to my Muse, which by strange coincidence was also named Julia.
On the car they drove faster than we train.
However it depends on the tubes, and they are in St. Petersburg, not less than in Moscow

The lake like a blue pearl rolled mysteriously into the woods.
A feeling that we are already in Scandinavia gave way to the realization of the sad reality.
The nature of the exact copy, and here is our little people.
And where they are accommodated - debris and dirt.

Especially there was a lively mid-90s with the beginning of mass tourism.
That has led to the degradation of woodland in and adjacent to the lake territories.
Deforestation, car washing, mountains of plastic and broken glass.

But like next year, I want to protect the lake from cars creating Parking interception.
To declare this area protected.
Will be banned the movement and Parking of vehicles, littering of the territory, breeding of open fires, walking Pets, destruction of vegetation, construction and logging.
As they say better late than never.
Good example of careful attitude to the environment quite at hand - just move the border 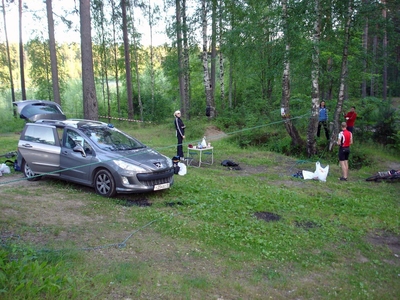 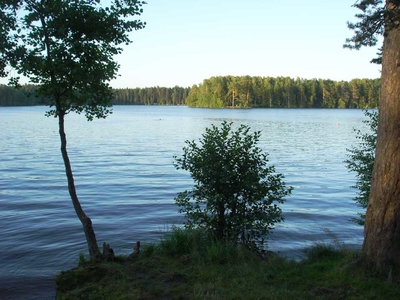 In the meantime, Ilya drove up on Peugeot almost to the shore already fenced meadow red-striped warning tape.
According to his idea, the poor colleagues have to climb the ropes, overcome obstacles, and rushes through the woods on bicycles in search of the control rods.

The next couple hours we worked the stretch between the pine trees, climbing ropes using hands and Gumarov.
It was necessary to ensure that strained the rope acquired a rigidity sufficient to withstand the weight of an average person.
For these purposes we have used a static climbing rope with a small degree of elongation.
This rope is made primarily for the purpose of Speleology, and therefore is also called "spelunking".

Implemented a variety of shapes to test people's degree of removal from the apes on the evolutionary ladder.
I tried it on. Be sure to walk around even very tight ropes stretched very hardly.
Tenacity and force of hands will be especially welcome.
And the tail would not hurt


While the men were busy with the setting for the competition, the girls were cooking dinner. 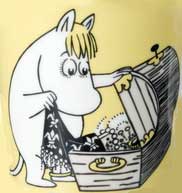 Ilya's girlfriend Yulia is just like Freken Snork - beautiful pretty girl with chiseled figure and regular features.
In my view, typical of the St. Petersburg woman. Stylishly dressed, well-groomed and rather arrogant.
"The owner of the silky hair, and a gold ankle bracelet. Loves decorating and spin in front of the mirror."

They are with my friend even it was similar in appearance.
I do not understand whether razvodyaschey , or sly expression with a smile.

Ilya is a sniff!
Finally returned from another most amazing and most dangerous journey.
nus.jpg" style="padding-right:10px; float:left" width="131" />He went to ride a bike in may and returned together with the spring).
"A sniff a big fan of wandering, who knows many hidden places and familiar with many creatures, especially small and defenseless that they admire.
He lives in a tent, smokes a pipe and plays the harmonica"

This time it went through high mountains and dense forests, swam across the blue sea – all in order to see a flower with green petals and bring him his beloved Freken Snork.
It is an amazing hike in the wilds of Venezuela is still waiting for its description.

Nelia is the opposite of Julia.
To be her Princess Atlantis of Russian fairy tales, if not for the need to conform to Finnish fairy tales.
Maloolaba with tenacious appraising look in his black eyes.
Maloemotsionalny and never yielding in a dispute with anyone else
"To live in his pleasure - what could be better than ever.
Mumla never regretted those whom she met, and never interfered in quarrels and trouble.
She just watched them with surprise and not without pleasure.

And any accusations of excessive sarcasm says that only responds symmetrically.
Her embarrassment or awkwardness she often hides, imitating a flurry of activity.
The kindness and tenderness of it, inherent to every woman in varying degrees, was carefully hidden under the appearance of rationality and pragmatism.

Despite all this ladies apparently found common ground, since they managed to set the table without too much loss and cries.

The water in the lake Shchuchye was slightly yellowish and very warm.
Despite the cool weather, even my friend decided to take a dip after dark.
The water is very clean and transparent, although lake melavigne
It is of glacial origin, average depth of 2-2,5 m with a muddy bottom.
From the lake follows the Creek — a tributary of the river Sisters.
The water level before the revolution was governed by the plotinka on this Creek the Finns who lived there and knew when a level must be maintained to preserve fish stocks and healthy growth forest along the banks.
About it now no one thinks.
Russians have always lived by the principle, after us the deluge.

Around our camp was located several standard noisy companies who were fired a fire and were blasting music in cars to the fullest.
And when we went to walk down was not going
Ilya has prepared a sophisticated revenge the next morning
We all got up early.
We needo Neleus was to get up, and Elijah to meet his Ho company with work.
For crowd control at a distance my friend picked up a megaphone.
It it with relish and barked the next morning the tents happy neighbors.
The type of lift , go is based on charging one at a time!
What stirred up all the hornet's nest)
Discontent awakened there was no limit.
But indoor is nothing, when the stigma of a gun