Guide to the characters of Moomin-Dole 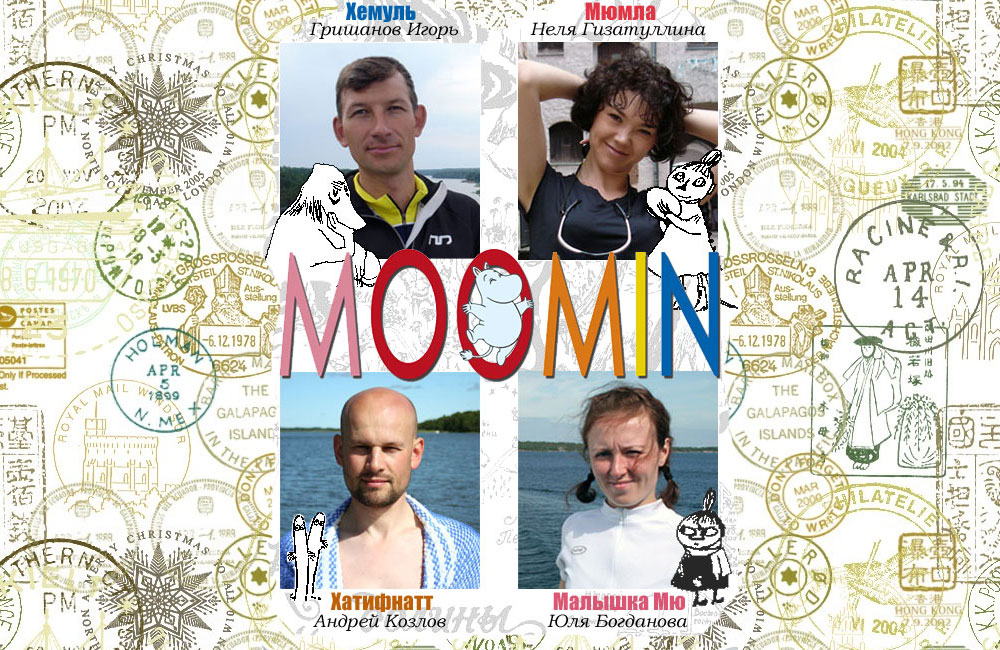 Our hike this time was half women.
And because it is not necessary to wait from me descriptions of any records, long distances and things like that associated with the bike.
Tasks to drive lots and lots to see this time were not.
The trip was made much more slow and contemplative than usual.

Forgive me my loyal and new readers, those voluntary or involuntary allusions that always come to me when describing our travels.
Scandinavia like no other terrain on the Earth map is filled with fairy tales and mythical characters born popular rumor and feather famous writers.
I really wanted to gently introduce you to the work of Tove Jansson.

Based on Tove Jansson books is the look at the world through the eyes of a child.
And the centre of this world - the house in which keep the lights on, you are waiting for relatives, prepared a delicious meal and a warm bed, and where you can always go back.
House as the unshakable stronghold of security and love, the thought of which allows to overcome any adversity and hardship! The period of childhood is fragile and short-lived.
Heroes Jansson, growing up, understand that the world is really different — cruel and indifferent.

We also have not children.
But our trip allowed us to experience the story, to feel for a while, children and find true freedom in their thoughts and actions. The freedom possessed only by the nature itself and the world.

As our route lay mainly in Finland, the case, as they say, introducing myself.
Moreover, the world created by Finnish writer, an exceptionally rich variety of creatures, and I think each of you looking closely will also be able to recognize themselves in any of them.
No exception and our close-knit Quartet.

Each of the fictional characters Tove Jansson has its own philosophy, stock haractor and temperament.
Behind the apparent simplicity are very interesting /images.
Maybe the guys will disagree with my choice, because their character traits are a little different characters of the world of the Moomins.
But I took not the liberty and responsibility to unilaterally make the decision and will refer to those characters with whom their similarity to the full.

So this was a long time ago.
One day, dull and windy August afternoon... or maybe actually it was a warm Sunny day, the four cyclists crossed the border and set foot in Finland.

Before you read about the distant countries, it is worth to know in order to better understand the motives of the actions and words of our heroes.

Further text is more for domestic consumption:)
For those who participated in the campaign and those who knows them well
Unauthorized readers can safely skip and go to the next page.

Andrew - in the world an employee of the company involved in container transportation by sea
Pretends that besides the sea there are no other bodies of water.
Eternally sullen and unshaven.
True to glaring in the sun the head is not the case.
Few people know that behind the mask of the noble aristocratic face.
In fact, he Hatifnats from the lost Isles, to which he repeatedly returns once a year to worship the barometer-the aneroid and tearfully ask him for good sailing weather.
Being forever alone and forever seeking for some purpose, wandering through the wide world.
Most of hatifnatten get in the company than travel alone , but this fact does not change.
They are the ones who only know how to swim but to swim and never swim...
Charged during a thunderstorm and then burn, as a nettle.
And they are a vicious life.

"- Viciousth way of life? What does it mean?
I don't know. said Fredriksson - Probably trample other people's gardens and drink beer."
("Memoirs of Pope Moomin-Troll")

However, hatifnatten able to reproduce, really do it seeds.
What fabulous childhood, but quite ordinary in the adult:)

Julia - railway employee
Came from the North to conquer the second capital.
And decided to go with the transport side.
Probably believing that saying about the troubles of Russia and its road is entirely unrelated to the iron.
Redhead cute girl is ever unhappy face
The smallest mumla in the world.
Very snide and sarcastic, but not out of malice, but because did not see any reason to be different.
Since MJ is incredibly small, its size kompensiruet confidence and determination.
A sense of humor Baby MJ turns away from her dull boring, but attracts to it people young and fragile psyche and a penchant for masochism.
MJ feels great next to the singles, they do not interfere with each other.
Perhaps that is why Julia Andrew was a little strange, but the knit in his eternal antagonism a few.

Nelia is the eldest in the family of muml.
Engine oil for it is as close and clear as the vegetable for Housewives.
Although sometimes she secretly admits that it does not represent how it looks, what it sells.
As for any of her mummy is characterized by extreme sociability and at the same time a rare independence.
Mumla very confident.
Most of the time she falls in love with anybody or looking after my little sister, Little MJ, she's not lost.
Love yourself and your gorgeous hair.
And not just hair.
A lot of time PRoodit, inducing Marafet on his stern but comely face.
Although there is in it something of Filimonki, because terribly afraid of insects and more than anything loves to clean in your home
Unwavering principles and external severity is the mask put on it to combat aggressive as it seems, the environment.

And finally, I -- Igor
To describe thankless and biased exercise.
However, my companions say that I'm the spitting image of hemul.
And this conviction is based on the fact that all Hamuli pretty boring.
Bossy and never admit his wrong.
Reach almost double the height of ordinary bracken.
They have elongated and slightly depressed face.
And feet are terribly large and flat.
I guess this is the truth)
But at least hamula very harsh and slightly unhappy, but actually they are very kind and very adventurous.

Others (and myself) I seem to Sniff
After all, this character is a bird voluntary.
A tireless adventurer.
A sniff does not violate the rules — they are for him simply does not exist.
He doesn't like banning signs
But he's funny and he can be counted on.

Here in this wonderful and not too typical for my Cycling trip we randomly met, started in an unknown world.