DISTANCE: THE HUGE SIZE OF THE | WEATHER SUN 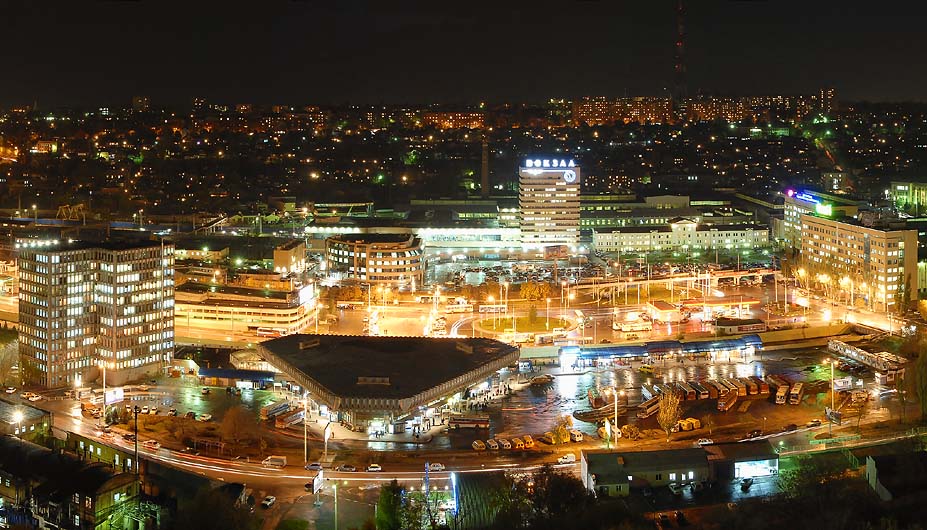 The first time I got into such a situation. That from the Crimea in late September, it is impossible to go. Never before have the tickets ahead of time did not buy.

We bounce in the station, then to the bus station for the next week of tickets is not even in Donetsk (such was the idea - to get to this city and then in Rostov-on-don). Andrew was nervous more and only a hearty lunch with beer and muscatel brought some peace to our ranks.

Chose the last option - try to go to infusion on the bus to Rostov. With that and settled down on the benches near the station. As long as were waiting for the flight was detected by the usual grocery store of the Soviet type - they sold Massandra wine at the cheapest I had seen in the Crimea prices.

Opposite way was a specialized wine shop and there all the same it was at least 10-20 USD more expensive. Well I just stocked up on gifts.

Bikes capocasale in pouches and used to wait for x hours. And here it came - the bus pulled up to the platform and Andrew rushed to the chauffeur.

To be honest I have absolutely no doubt that he will succeed, although we were not alone. The bus was besieged by those wishing to leave the Peninsula. But Kuzmin was able to find an approach to even the dumb stick, that really there to talk about living people. Great talent!

In General we plunged. People crammed the whole bus had to stand in the aisle.

And had to drive all night! Perspektivka not pleasant - but what to do.

Of course on the way to the border some people got out , but it does not alleviate the plight. Was able sometimes to sit in the aisle.

Andrew is the trump took place on the steps next to the driver and what was cracking with him all the way. My tongue would have withered in the fifth minute - and he did - hearty. then even took over the remote control bus of the TV and put the American film "battleship" (Thriller about the brutal sailors and aliens). But I will enjoy watching for a long time could not - the bus was full of believers, women wearing headscarves and they rebelled against the bad videobecause. In General overpowered they Kuzmin. The remainder of the journey went in silence.

At the border we were dropped off and we are on their own after collecting a large drove to the checkpoint. It was pretty cool in the middle of the night, well at least no rain. We pickled half an hour in front of the gate. Kuzmin plaintively told the border guard "can we hurry this up! So Balto Home want to."

But then the ear does not lead. Command no - wait.

Homeland again did not want to accept their citizens although without a bit of their humiliation at the same time.

Then even more hours waiting for our bus - fearing as if not to miss him. I already started to figure out how to reach Rostov on their own. From the customs checkpoint Fun-Voznesenka - Novoazovsk to Rostov came out six hours of slow pedaling. In General the time of course, and so to our late train.

But no bus came and after 4 hours at 5 in the morning we rode in Rostov-on-don, where we were to spend the whole day.

What I absolutely do not regret. A very nice city.

We passed things in Luggage storage and went ctatyca of the southern town. 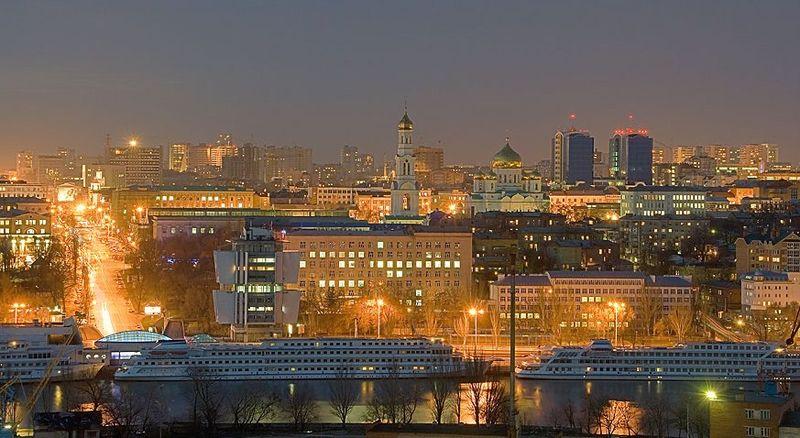 All sorts of monuments and statues in it, which distinguishes from Rostov Ufa. The imagination of our mayors is not going on busts of what some national writers or poets. The figure of the janitor near the shopping complex of the World is almost the only deviation from this dreary rule.

Next to the characters of Mikhail Sholokhov we stayed. Andrew found a similarity between me and grandfather Shchukar. I am also indebted left and felt that nahalenok and Kuzmin are one ( well, with age a little bobble) 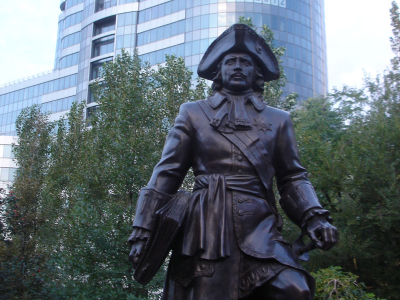 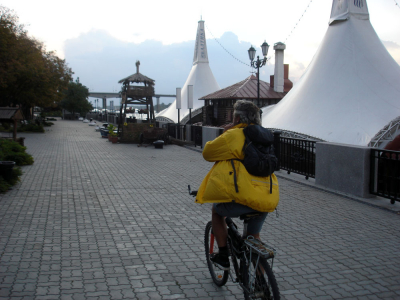 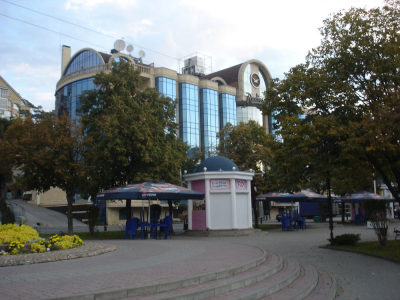 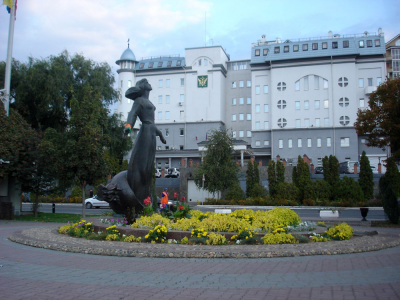 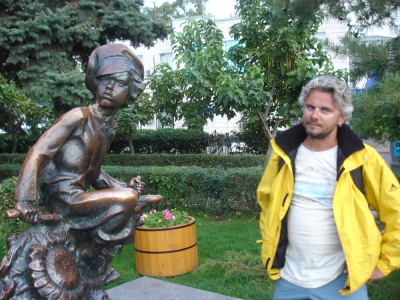 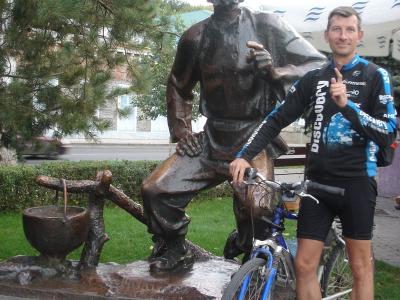 In Rostov Chicana the boardwalk's we would be in Ufa this!

The promenade, named after the famous naval commander Fyodor Ushakov - one of the most famous attractions of Rostov-na-Donu. "The don-father" is a truly magnificent frame: iron fences, stone slabs on the pavement, the fresh green lawns, monuments, sculptures.

Spoils the case of the road between the seafront and the start of the residential areas of the city. But first she paloaltoonline, and the second I read about plans to eliminate it altogether and make a completely pedestrian promenade.

Compare with our Ufa project Cherepanovo of the highway along the White to Nizhegorodka! Again utter stupidity of the authorities!

Coastal zone - the most valuable thing a each city. It is a factor of attraction for residents and tourists - they must be fully placed for Hiking and Cycling. No cars! All over the world realized a long time ago.

The waterfront is the face of the city. And from what is built on it - the impression about the city. 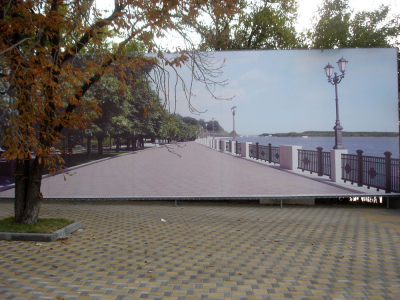 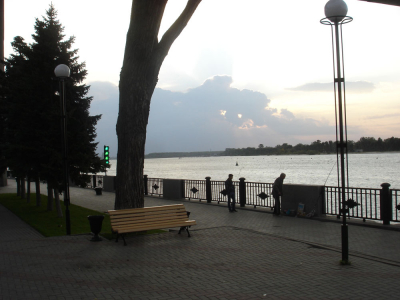 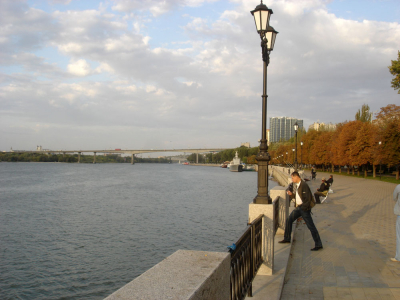 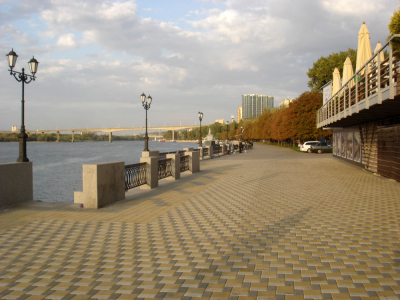 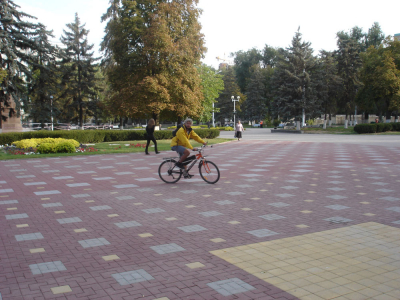 In Rostov as in any other city of Russia a lot of beautiful women - probably a mixture of races is to blame.

Political life is also at altitude. Although the Communists fenced fences put up around the police - all the same give them a call.

The rest of the time spent in different cafes and traveled the whole center inside and out.

A very green city. Many parks with different recreational opportunities. 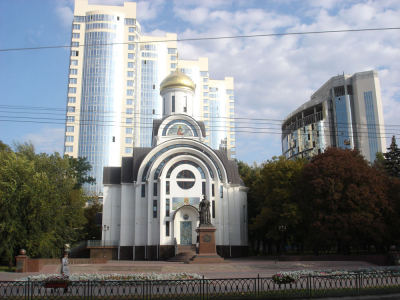 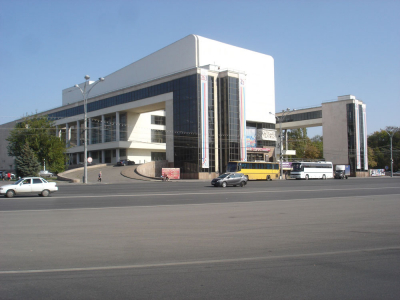 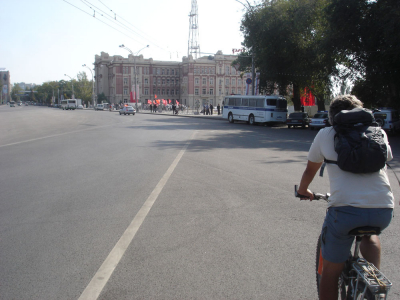 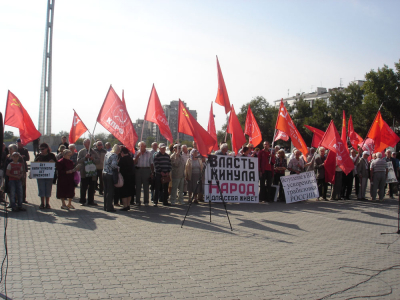 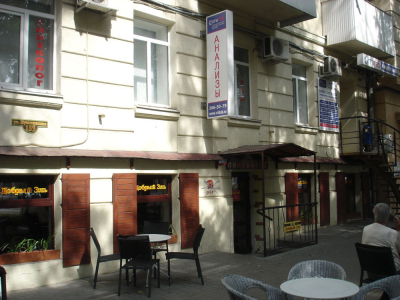 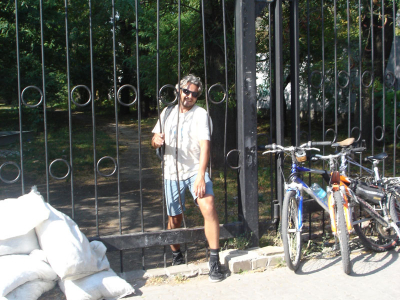 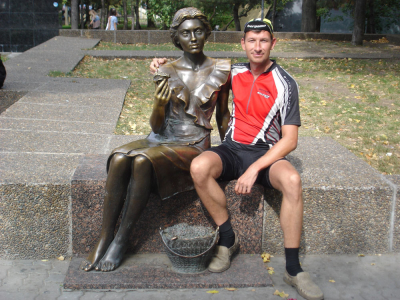 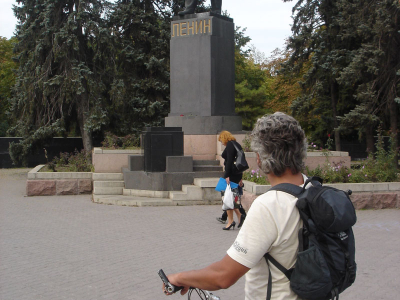 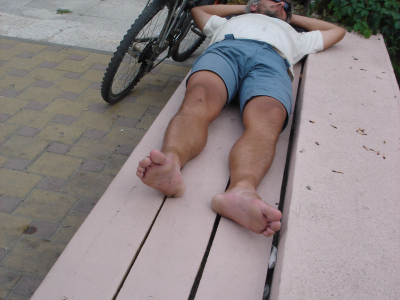 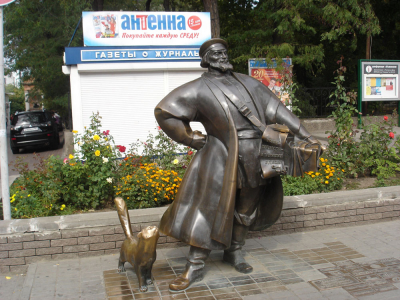 One of them decided to get some sleep. But the weather deteriorated and the rain forced us to seek refuge under the roof. 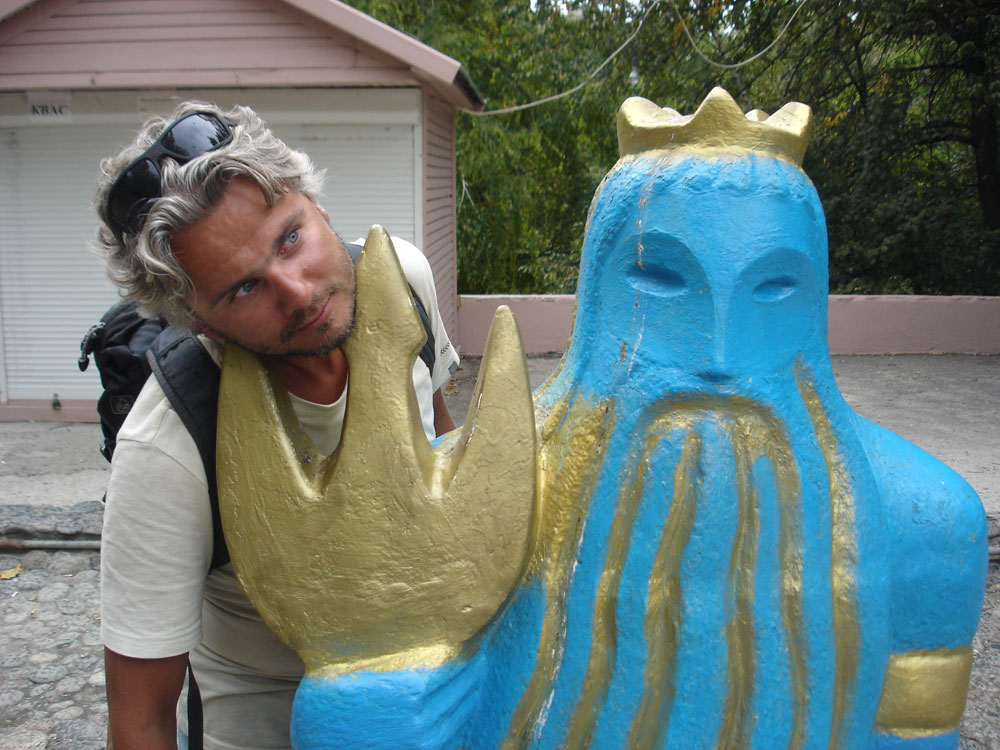 This is Andrew in the pantomime "the Forks". I mean if not for him we would have been pitchforks and go home we don'twas taken.

That is the Holy truth) 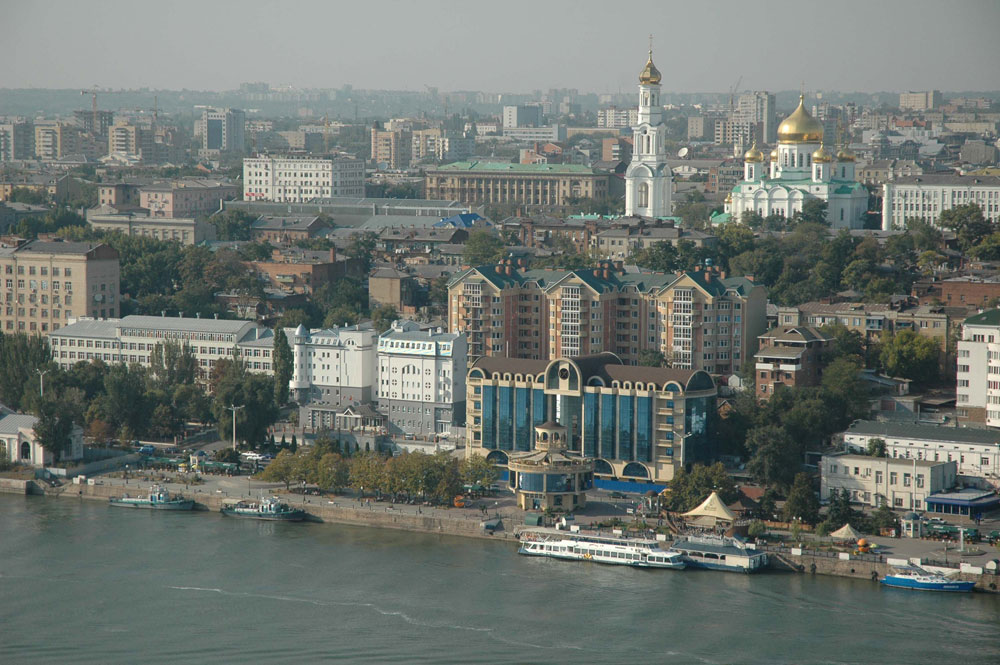 So ended our two-week food trip in the Caucasus and the Crimea.