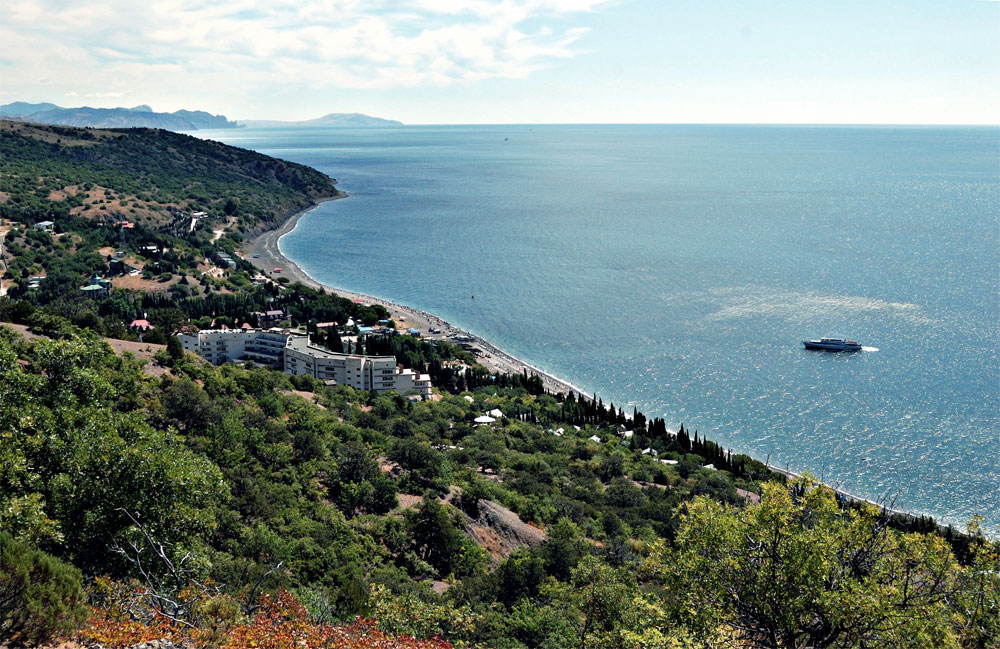 To describe the road between Sudak and Alushta thing kind of pointless. It's a pretty boring streamer with a length of 65 km with three large and two small passes with a height of 300 -500 meters. The day this site we never drove before. And in this sense is not - because along the way there is one place that I really love. It Pryvitne. Where we got to in the lunch time.

Privetnoye is 50 km North-East of Alushta and 30 km West of Sudak is the main resort towns of South-Eastern Crimea. The village is located 3 km from the sea, in a wide mountain valley, sheltered from the North by spurs of the Karabi-Yaila. The population - 2.4 million people. The main activities of the inhabitants are working on winery farm and Privetnoye, the uskut vineyards.

Privetnoye from the North to the mountains through the pass laid one of the most beautiful in the mountainous Crimea trip to Belogorsk.

Summer and early autumn the air is dry, he is constantly circulated and updated. Breezes from the sea bring healing air saturated with tiny particles of salt, and sunset - cool fresh air of mountain forests. For aerotherapy hard to be the best.

The village has a long history, its age is comparable to known since the middle Ages the cities of Sudak and Feodosiya. The guide on Genoese fortress there is mention of the village Scooti (the ancient name of the village), which was the feudal possession of the Genoese-feudal brothers Guasca (13-14 centuries BC).

The farm produces a dessert wine (port, Madeira, Muscat, Tokay, etc.). Another attraction of the village Privetnoye is the co-op recreational purpose Katran located on the shore of the Black sea

But we didn't need the village - we turned to the sea. Where the end of a long beach and is maloprimetny white house. This littles wine shop from the local farm. There you can taste and kuputi this bottle of Massandra). And even grapes. But the highway and there was not . No luck this year.

Andrey half an hour spent in this oasis of wine chatting with a young saleswoman and regulativa old Soviet Tome on ampelography, with pictures and descriptions of Crimean wines.

And then went in search of food. A little farther under the mountain had built cottages slipways. Got this interesting mini town than that smacks of Naples in miniature. The prices of rooms in these cottages are certainly sickly. This co-operative society "Katran". Building cooperative located 20 metres from the sea, which makes the stay particularly suitable for families with children. Low-rise buildings (three to five floors) located three rows along the sea. In the cooperative there are shops, cafes, bars, Billiards, tennis. 20 metres from the Parking, to the co-op is adjacent vegetable and clothing markets.

Saw on the Internet the Crimean project architects for the redevelopment of this lovely spot. A beautiful project of course. But if he will be implemented then lost provincial Fleur , lost is a sweet desolation. All gone in General.) 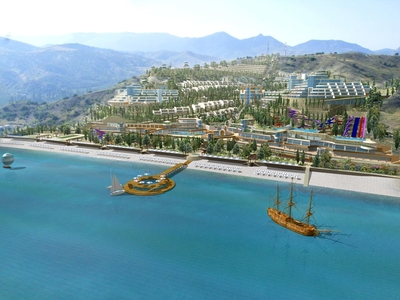 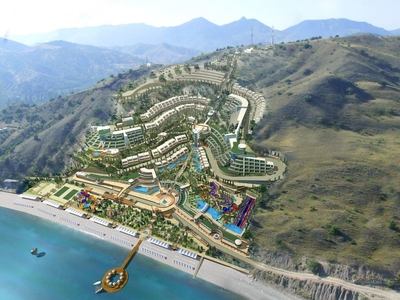 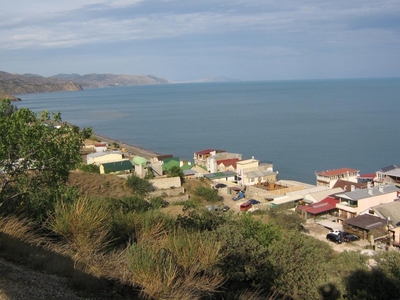 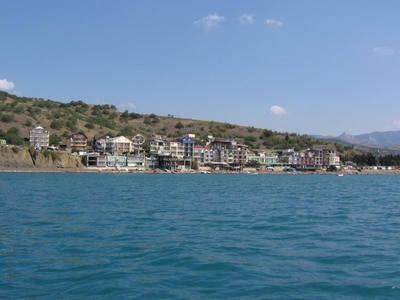 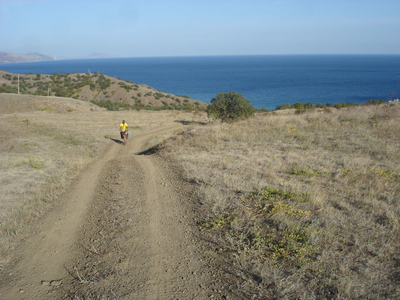 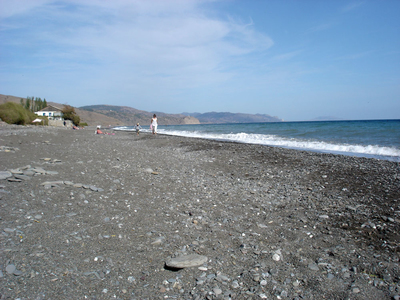 As for the search of delicious food - my friend here out of competition. He has a flair. And this time he unerringly found the place was delicious and inexpensive lunch. A small eatery visitor Uzbek. Pilaf cooked in a large cauldron pleasant cargo lay at the bottom of our stomachs. All the family of Uzbek participated in the service with us, even small children. Very pleasant impression left. Well, delicious of course. After such a hearty lunch the law of Archimedes, it was impossible to just go. Bathed and dozed for the next two hours.

Further, if you go on the only alipresse we had to climb another pass with a longfirst and tedious ascent. After the descent we would have been in the valley of the river Kanaka. According to our map it was possible to cut this area has rested along the shore , just up the hill and around a military unit located nearby. And so we did.

And soon saw another locality - Kanaka. I was not there never and we decided to have a look. Previously it was a closed place. Then rested those who built the Soviet space program. Boarding houses and cottages for senior military space leadership.

Kanaka resort South coast, located in a relic juniper grove of state nature reserve "Kanaka". The village is located in the beam. Another difference of this resort is that it is the only village in the Crimea, created and existing exclusively for the needs of tourists. Despite the significant separation from the adjacent villages, this resort does not have the status of a separate settlement. Kanaka is located on the shore of the Bay, between the towns of Sudak and Alushta, in 44 km from the first and in 41-m from the latter. The nearest settlement - the village of Rybachye on the road 12 km. along the coast about 5 years. 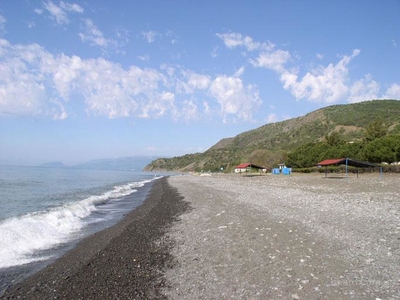 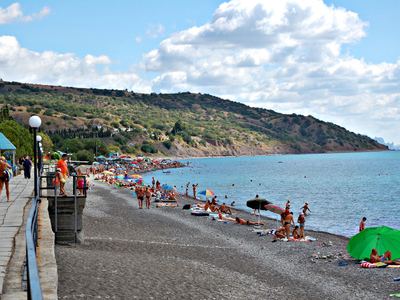 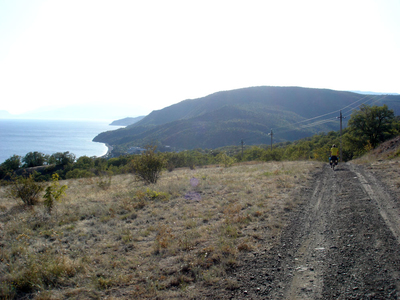 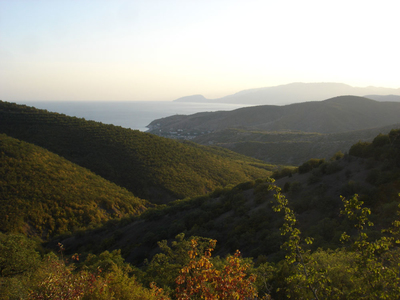 Kanaka has one of the best beaches on the South coast. Beach 2 km long, width ranges from 20 to 50 meters. The beach is pebbly with a mixture of dark sand. Pebbles of different size, from small to large, meet detached stones with a diameter of about 10 cm the Water here is very clean and the bottom is gently sloping. The only disadvantage of this natural beach – not the beach, under the water pretty pebbles and stones. 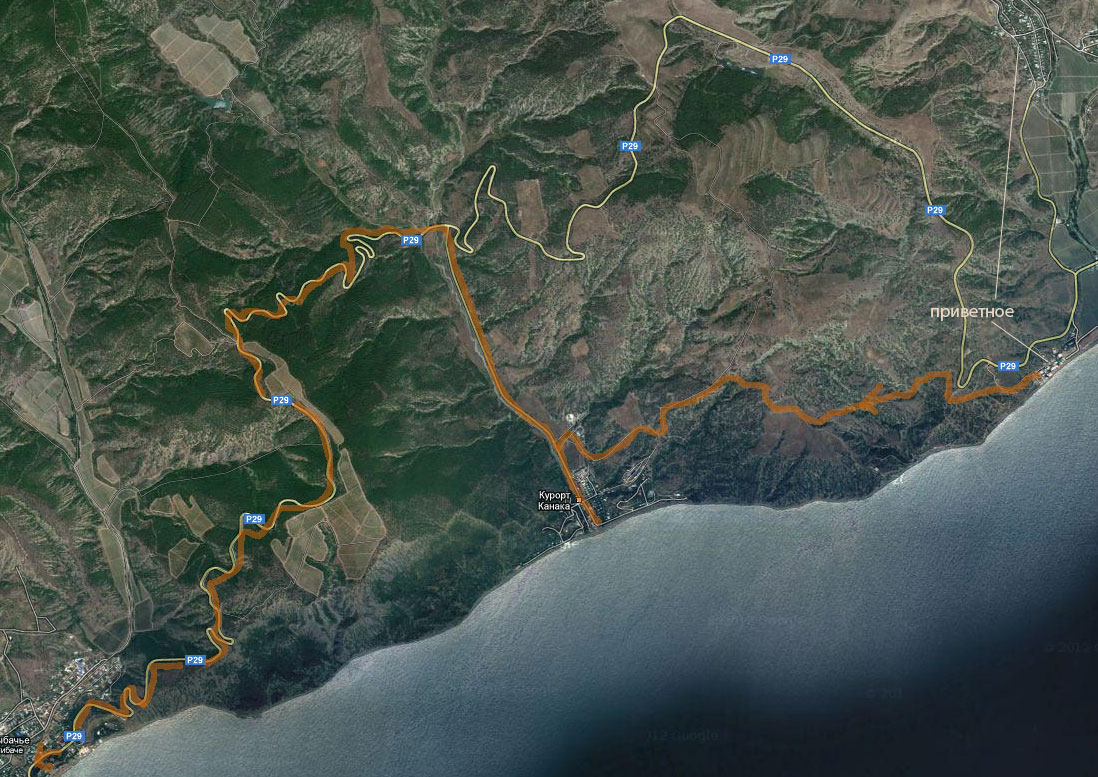 We drove to the beach and stopped in a local diner to take a break and take a look around. We are addicted to the local Crimean Tatars. We got to talking. It turned out that one of them knows the history of his people, of course we delicately began to remember all that is connected with the deportation of the Tatars by Stalin . On the other hand revealed that he does not know who Gagarin has no idea that in Soviet times there lived cosmonauts. Believe him for all the drum space as such))

How odd develops the spiral of history here . How long was it from the middle ages to the Ottoman Empire and the Crimean khanate when the Crimea and its infrastructure from scratch created during the tsarist Empire and then the Soviet Union. How many were created then by Russian and Soviet workers and scientists, built cars and Railways, planted vineyards, built one of the finest recreational areas in the world, etc. And now it seems that the middle ages is returned together with the Tatars back again. Space and other scientific objects come into disrepair and are destroyed, the vineyards are cut down.

However blame some of the Tatars would be probably wrong. But the trend is nevertheless there. And every time I visit Crimea it seems to me more and more. Although everything changes... and perhaps soon the pendulum of events swings the other way.

The beginning of the resort development of Kanak beams refers to 1915. The Ministry of land improvements prepared a special certificate, where the natural and climatic conditions of the Kanak beams and rest in Crimea with children was emphasized: "She is protected from cold North-Eastern, Northern and North-Western winds mountain range. Her mouth open to the sea a gentle Bay with a wide strip of pebble beach, which is recognized as one of the best beaches of the coast from foros to Theodosia."

For "the construction of places of treatment" was declared donations. Collected 500 thousand roubles - a sum quite sufficient for the organization of a health resort. Plans were large: for example, between the Kanak beam and the Fishing was supposed to pave the highway "tabloid type". The name of the resort came up with a lush - "Alexandria". Plans, unfortunately, went awry in the midst was the First world war. Then the Second world war, then.... well you know that then) Surprisingly on a hundred years past the plans of the tsarist Russia did not materialize.) The Boulevard was never built. Maybe even because the place itself was chosen by the Soviet space Agency.

In those almost mythical days in the Soviet Union rapidly developing a space industry, and businesses related to this industry, got the right to choose a place to stay. Legend has it that the place is under construction boarding house Kanaka identified almost himself Sergei Korolev, one of the "fathers" of Soviet cosmonautics. A remote corner of the Kanak people to this day called the "General's house" in memory of the highest ranks of the military space forces.

At the end of the eighties of the last century, the company owner started to build a year-round boarding house Kanaka elegant architecture. Unfortunately, all plans to be failed. With the collapse of the country construction has stopped; now operated only dining room - we just saw this hotel from the scene of the cafe where the rest.

The place is reminiscent of the New world. "Kanakskaya beam" is a Botanical reserve, where there are juniper and wild pistachio. The main attraction Kanak — grove, consisting of several hundred very old juniper trees and pistachio. The average age of trees 250 years, a significant portion reaches 400-700 years of age.

There are several conjectures of the origin of the name . The tract is located just in the middle of the road between Alushta and Sudak, and if you walk along the path above the beach (so went in the past, it was where to go), this is a convenient place to stay and spend the night. "Konak" in Turkish — "bed". There could be a place of worship in Turkish - "khanaka". There is also a Greek translation of the word "Kanaka" is beloved.

By the way we also had time to think about the bed, it was nearing evening. To go for bereGU we have not decided on the night and was going to travel the mountain Yang-Tour (Tower of Ivan) over Canacol through the pass. Went to this place . To go to the track it was necessary first to ascend along the river Kanaka. On our left towered the Jan Tour.

Here grows not less than 1,000 trees of juniper high; their average age 300 years, but there are instances of up to half a meter in diameter and an age of 800 years. And how much growing there is a huge Crimean pines! Two hundred, three hundred, four hundred years it was these trees, but in the nineteenth century, people have cut them down and dragged the logs by oxen to the coast, loaded on ships, taken away for sale abroad. When did this pine forest is gone and the water; only a small trickle flowing now Kanak beam, and the heat is dry. But in the XVIII century there was flowing, the memories of Pallas, real rivers.

But the whole Eastern slope of the mountain Yang-Tour, a reproach to the foolish ancestors, during the construction of the boarding house were planted with the Crimean pine. Seedlings arranged in neat rows and as it turned out, with fiction: on the opposite mountain, and even better — the plane, read a huge sign of these adult pines: "CRIMEA". 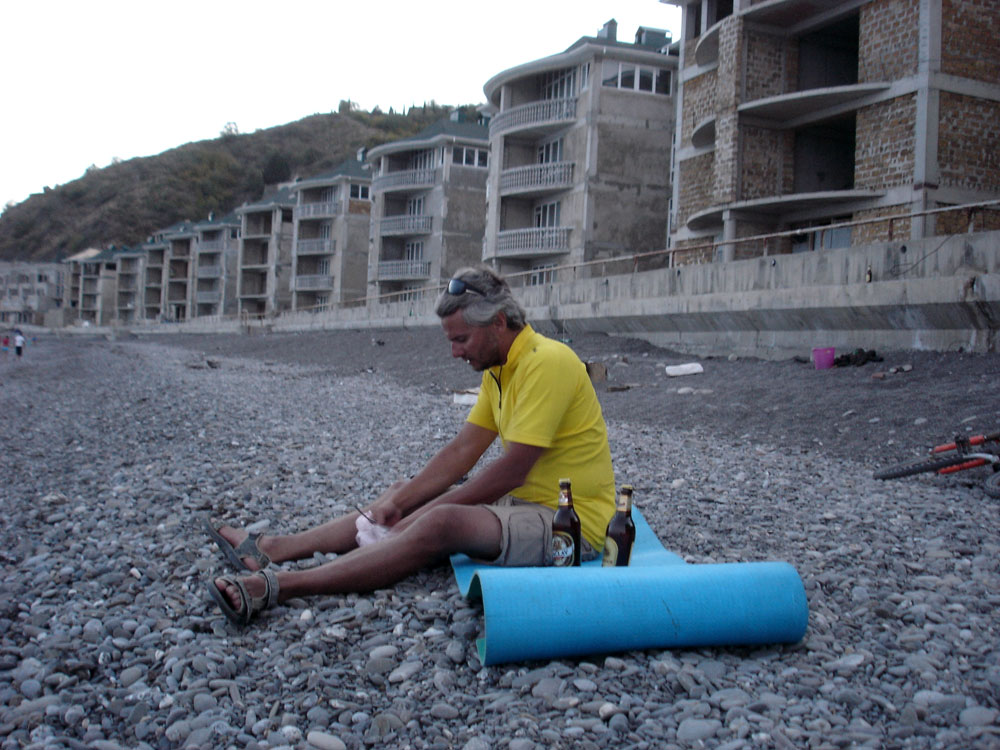 The sun had already set when appeared on the horizon fishing. To go further does not make sense (although I was tempted , but Andrew restrained my impulse).

The result was up on the beach right in front of unfinished villas at the end of the beach. Behind the corner there is a disgusting typical Russian toilet system "point" fragrance of which surpassed even the smells of the sea.

We of course walked by MAXIMO from him , but still the smell was there. I'll never know how will the inhabitants of the villas here and then live) For a hefty price with the neighborhood. 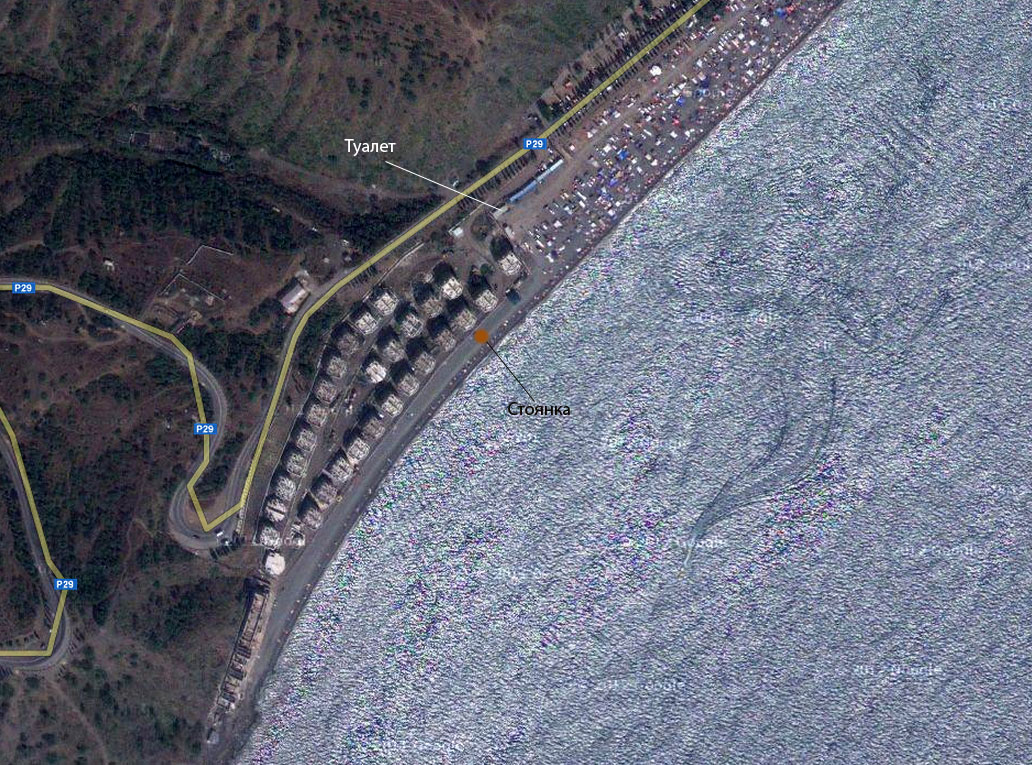