Cycling / The threshold Nedoma / Test on the kid

Test on the kid 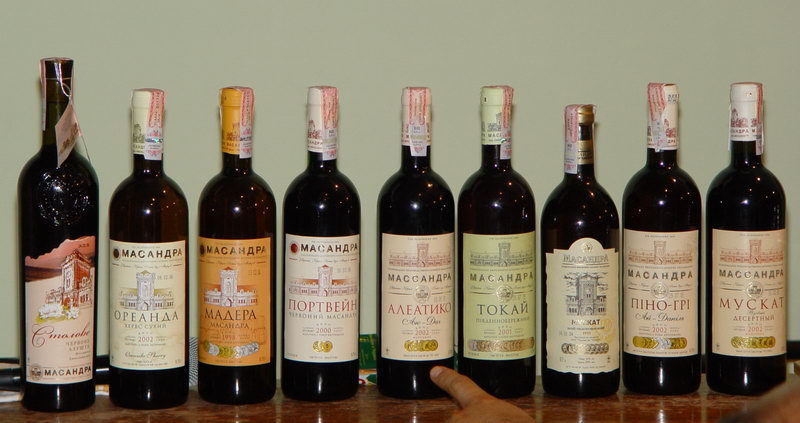 Serpentine from Rybacheva and to Alushta - the most uninteresting part of the journey. First towns Solnechnogorskoye, Malorechenskoye and then drive away from the sea with a lot of small perevoshchikov. 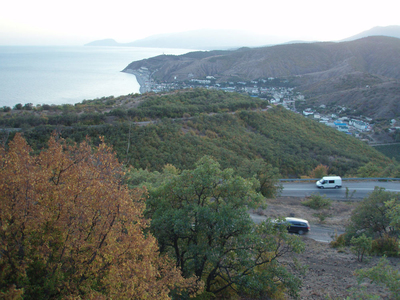 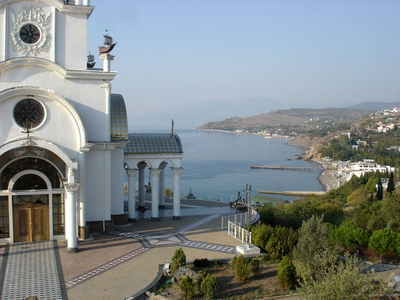 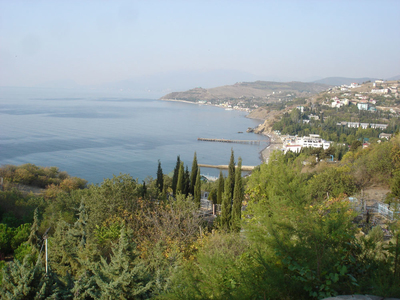 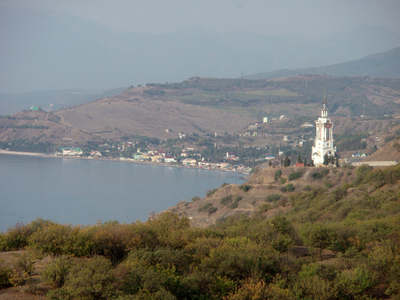 We were full of energy in the morning and quickly spread to Alushta. On the southern coast of Crimea Alushta is worse probably only to Yalta. No idea how there can be a normal vacation. All beaches in Yalta are located on either side of the center. And all paid.

In General, to stay here did not, and went straight to Yalta. However, to get on the road to Yalta had little return and a lot of puff climbing up the sometimes very steep streets.

As said Kuzmin - it was the "test kid" (Yes that is what was meant in the title of the day, and not what many think looking at the top picture). I've been through it never then, although the huge trunk of the backpack is not much contributed to the pedaling in the mountains.

But it was the end of our route and by this time the legs gained enough strength , in this state, I could ride a Bicycle almost always. In winter, all the power goes out in the spring and have to start almost from scratch.

Andrew on the bike at home does not travel all by car. And it also affects the muscles of course) 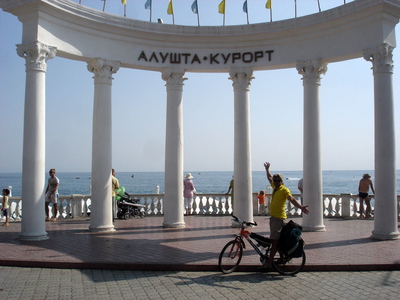 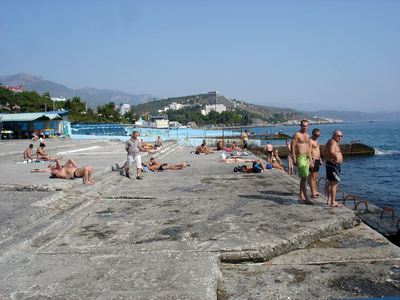 So once out on track I went to Yalta. The road there is boring - mashinovedenija in Crimea. Therefore, a digression.

Interesting point. In addition to outright home falshak sold in tourist areas of Crimea by the glass at the Peninsula is full of formally factory fault, which can also be called minifalcon. They do not poison, but normal wine, it can not be considered.

Here is a list of bona fide in the Crimeaninzhevatov who remained loyal to the canons of wine and stood on the stupid path of making money.

Factory of sparkling wines "New world", located in the most beautiful place of Crimea - Sudak, the sparkling wines which are recognized throughout the world.
GP agricultural firm "Magarach" in Yalta is the oldest wine and vinoproizvodstva the base was established in 1826.
Inkerman fine wines winery, which is located in Sevastopol and has large areas of vineyards.
The winery "the Fountain", located in the town of Bakhchisarai.
State farm-plant "Koktebel" is known for his skating and wines still in Ukraine
Agricultural company "Zolotaya Balka", the company is located in the city of Sevastopol in the Golden beam.

In the tasting room Tavrida we taxied.

Interestingly the sign of the Tasting room on route visit near pretentious wine shop. Very nicely decorated , outside what's inside. Men in pressed blazers welcome visitors. However, even a cursory glance said that the prices here are too high. And the store is predominantly NOT the CRIMEAN WINES. Well, perhaps someone in their right mind would buy in the Crimea there French or Chilean wine?!!!! This shop is clearly designed for visitors.

It is enough to drive inland from highway some hundred meters, and here it is - brand shop of the farm "Tavrida" with a tasting room.

Currently the main activity of SE "Tavrida" is growing. The planted area of grapes is 367 hectares. the Total area of Tavrida is 720 ha.

We were very favorably) can be configured cyclists after 70 km of descents and ascents.

But the aunt in the shop they just hit his "hospitality." I immediately felt in the old Soviet shop, with a deficit of food, when Pravec was the king and God, and the buyer - small dozhdlivoy louse.
So much neglect and snobbery, I have not seen. But Crimea is different, it is these aunts old school - they sit in the shops, in boarding houses. It may even be already children of my aunts - they just inherited the example of conduct).
A kind of local flavor.

We were not even allowed into the next room to sit to drink bought wine, despite the fact that it was empty and we promised to go on demand. Had to Nestle in front of the counter.

Kuzmin had a dog with them as usual. But to find the truth he failed. Aunt was concrete))

And the wine was decent from them) And extremely cheap.

Studies have found that moderate consumption of dry red wine reduces the risk of cardiovascular disease by 25-45%,
and the risk of stroke by up to 50%
Professor, faculty of pharmacy, University of Bordeaux J. Maskeli made evidence-based conclusions, hthe polyphenols in wine have the ability to absorb free radicals, i.e. possess antioxidant property. This is shown in a doctoral thesis by G. N. Arpentin.
In addition, tannins soften the effect of ethyl alcohol on the body, contribute to the suppression of the hyperfunction of the thyroid gland.
It is scientifically proved that phenolic compounds of wine have a virus
and antibacterial properties. So typhoid and tubercle bacilli, cholera Vibrio, Entamoeba histolytica and other pathogens of intestinal diseases die in the wine for 15-30 min. In water, dilute
half wine, these same bacilli die within 30-60 min. So it is highly advisable adding wine into drinking water in the event of mass spread of gastrointestinal diseases.

But of course you need to comply with the measure.
"Everything is poison and everything is medicine - it's only in the dose," said Avicenna.
And in the case of wine this is especially true - dose, few people comply. It seems to me we Kuzmin her too overdone)

In the second half of the 19th century on the southern coast of Crimea began to develop actively the winemaking and viticulture
The emphasis is on the production of table wines from European grape varieties.
But soon the winemakers noticed that the wines produced from same grape varieties and using the same technology, are fundamentally different from wines produced in Europe. They were too full, extractive, even slightly rude, which is not typical table wine. It soon became clear that the wine quality is affected by not only grape processing technology, but also the soil and climatic conditions in which to grow a particular vine.
After years spent on the experiments
and experiments, the Crimean winemakers have managed to create this wine, and introduce it technology into industrial production. Thus was laid the future glory of the Crimean winemaking – Slavand dessert (liqueur) wine.
Dessert wine is served at temperature of 16 – 18 ºC. They are eaten after the main meal to the desserts (ice cream, cakes, soufflés, candies
etc.).

Andrew couldn't stand sweet wines. But here there was no choice) had to eat. The more I used these names never heard of.

It burns, not burning, ruby,
In this captivating tones of chocolate.
In this heat the Pyrenean valleys
And Caucasian gorges coolness.

Slightly bitter pent-up pain.
All absorbed the wine difficult.
Even the most arrogant king
Drinking it will not give up standing.

Well, we drank it lounging from barrels) Did the cyclists not steeper than the kings? Kings of the road!

In General, the situation with massandrovskie wines is very complicated) Even in the Crimea the same wine is different.

And bottled in different bottles. Firstly it is due to the fact that subsidiaries from Massandra somewhat, but also perhaps in connection with the falsification.

Here I found a controversial blog of a friend where he paints how to distinguish a fake.
(http://rescuero.ru/2011/10/kak-otlichit-nastoyashhee-vino-massandra/)
For example, this man claims that his beloved Kuzmin port Alushta (bought by us for 100 rubles can not be worth less than 250 rubles if present)

And it is manual from the factory "Massandra" 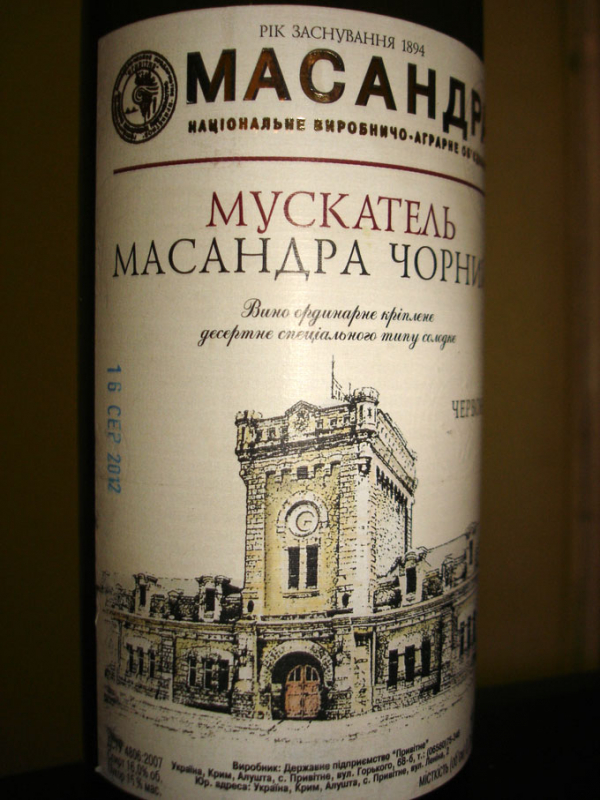 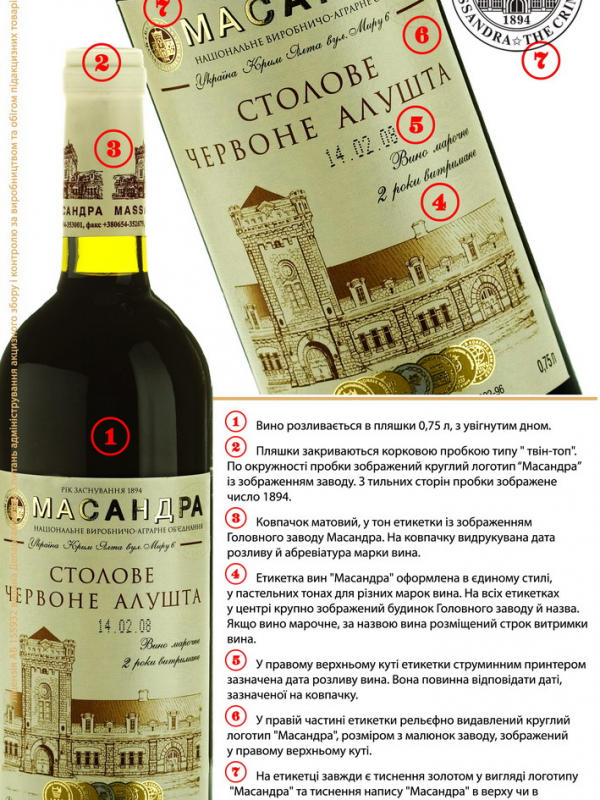 Went to see bottle purchased before leaving the shop near the station in Simferopol and found they almost all traces of allegedly adulterated wine Massandra)))) And we are still happy that you have found the place where it is sold very cheap.

Namely, not the bottom there is a big letter M (but it is concave), date prostableon the side the blue one is printed horizontally in black dots. Print contains a different image than the building of the plant.

After studying various sources I came to the conclusion that we drank all the same wine, but not the best Massandra from the parent company. Because is cheap)

Here's the explanation gives the plant itself:

"Currently, the Association "Massandra" has about 4500 ha. of vineyards. They stretch for 180 km from foros (big Yalta) to the town of Sudak. All these lands are divided among 8 farms. Informed wine under the name "Massandra" was done only at the main plant in Yalta. Now the situation has not changed. The original wine is produced only in Massandra. However, at the same time the economy is gradually mastered and own production. Therefore currently on the market there are products like the Brain of plant, and such farms as Livadia, Privetnoye, perch, etc. In this regard, each manufacturer is a separate legal entity. And common the label is only one: the inscription, which says that the company is part of the Association "Massandra". A particular manufacturer is specified in the line "Manufacturer", which is a must when making wine. " 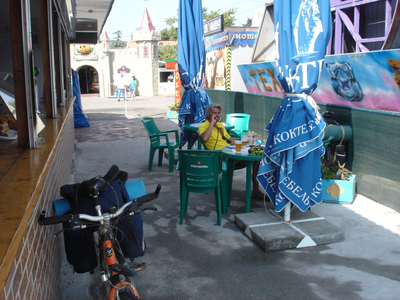 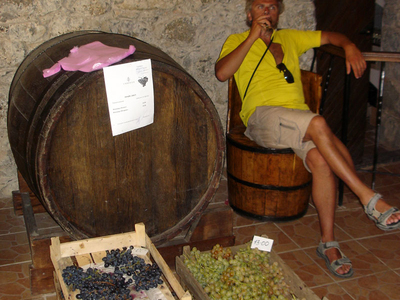 Soon came to Yalta. The question arose overnight. And I'm probably the only time during the entire campaign the reins and took into his own hands.

We went to the bus station. And after some time I surprisingly saw the Glory - man give shelter. We had already rented a room 4 years ago.

That's lucky) Stopped this time. And in the same basement room. Showered and went for a walk on Yalta.

Yalta is the most uninteresting for tourism town in my opinion. Despite its capital and a catchy touch of glamour - it's boring and uninteresting. In addition to the beautiful waterfront to watch here is nothing special. And do the same however.

But again internalsSNO ate ) in the evening felt unwell. Like 4 years ago to get sick at Yalta did not want. But paracetamol suppressed the cold and the next morning I was almost as fit as a fiddle.

We are going to go light on Aypetri.