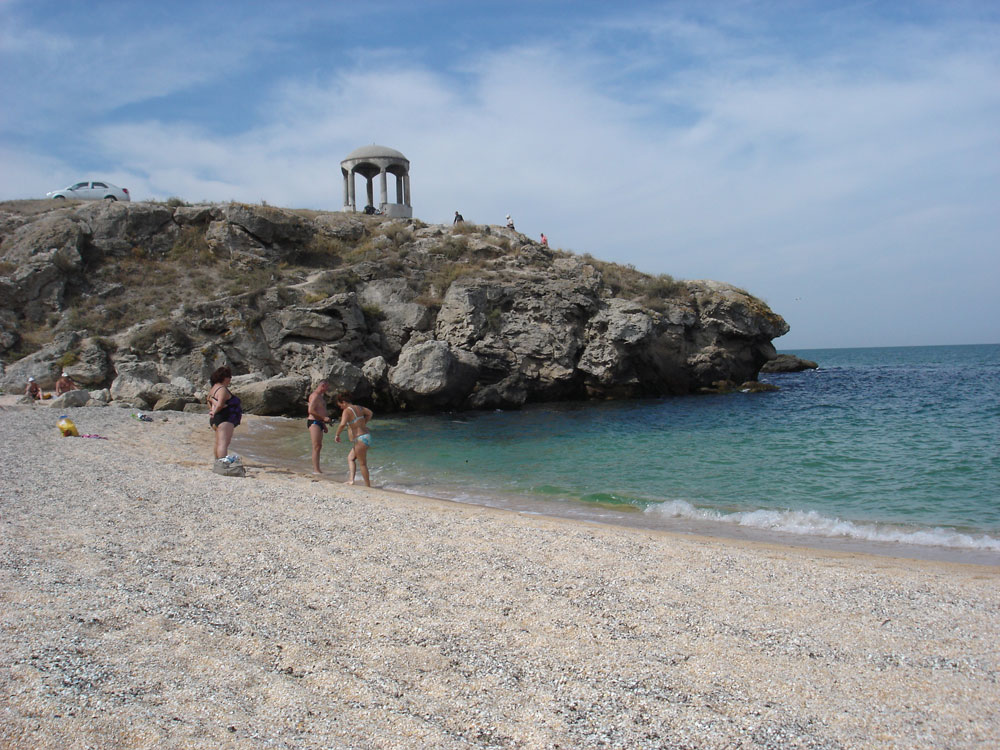 This day we had a long way to go from sea to sea.

But first we decided to drive around the Kazantipsky Gulf. 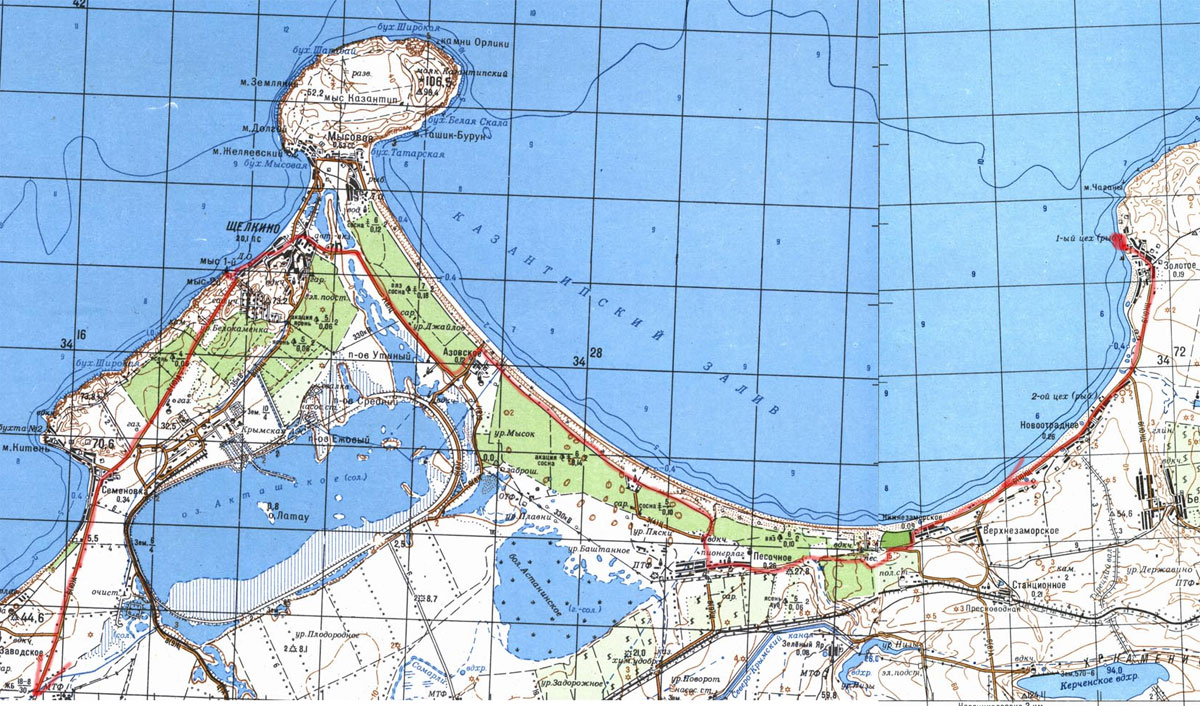 Smooth arc of the Bay juts out into the Northern part of the Kerch Peninsula. It is located between the Cape Kazantip and Chagani and has a width of 16 kilometers and the distance of over 25 kilometers. The name of the Bay intriguing enough has Turkic roots. Kazantip literally means "bottom of pot" on him like the Cape. And so the Bay got its name due to the Cape.

Kazantip Bay is perhaps one of the most peaceful places on Earth, distinguished by its not crowded, pristine and quiet a Significant part of the Bay consists of Shelly-sandy beaches, the width of which reaches 20 km from the Border of the beach – a strip of trees sucker, with a bizarre appearance. Their drooping rich the crown create the perfect shadow protection from excessive sun. Places is landing a low pine trees.

The descent to the sea – smooth, water is clean, clear and warm. But not this time) after the storm the temperature dropped to 18 degrees.

Unlike other areas of the sea depth here. Another advantage of the Azov sea – there are almost no jellyfish.

From the Gold we picked up a nice asphalt road almost along the sea. I think this will continue - but no. After Nijnezamorskoe - started primer. 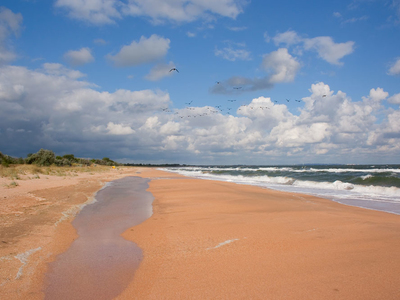 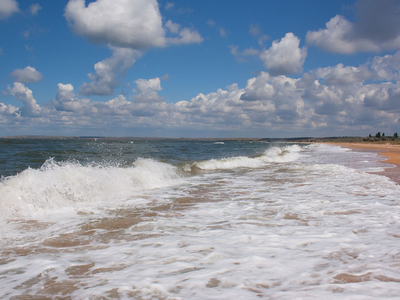 Along the Kazantip Gulf sand the primer goes through young woods. Where it nears the sea, peremitina sand and go hard. The hour we strayed in the intricacies of coastal trails and even went to the territory of a camp site to the displeasure of the local guard, violating his universal atcoy.

Well that primer is probably clean, otherwise driving would be impossible - washboard mixed with sand. And so straight to the Cape Kazantip.

Interestingly, it was dead after the collapse of the Soviet Union the alternative energy of the Crimea revives. But alas, not the efforts of local scientists, and with the help of Western companies.

For three years in the Crimea is built for four different power capacity. Type of these stations not be what was the old at Kazantip.(she was the tower, she was surrounded by heliostats moving following the movement of the sun and focusing the solar energy on top of the tower where the steam generator. But writing was very cost-inefficiency - all derived from solar energy was spent on the positioning of the heliostats ) Before bagna power towered over derevyami and it is almost everywhere visible - but right now there is probably cut down for scrap as usual.

Ninensei stations contain a bunch of solar panels. The project is implemented by the Austrian company Activ Solar, with headquarters in Vienna, engaged in the production of polycrystalline silicon (polysilicon) for the solar photovoltaic industry and running a large-scale photovoltaic power plants.

According to some reports the company is partly owned by Ukrainian officials of the highest echelon associated with current President Viktor Yanukovych. 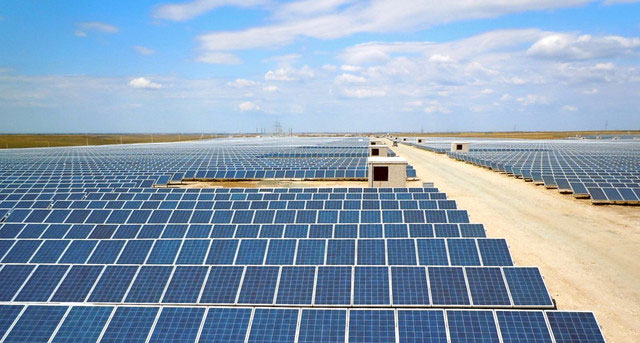 Activ Solar implementing a large-scale construction projects of solar power plants in the South of Ukraine since 2010.

To go to the nuclear plant Andrei is why it is not wanted, and we moved straight in Shelkino, where great spent three hours enjoying a delicious meal, cold water of Azov , beautiful views and each other's company. Although about the last one I'm only for myself) 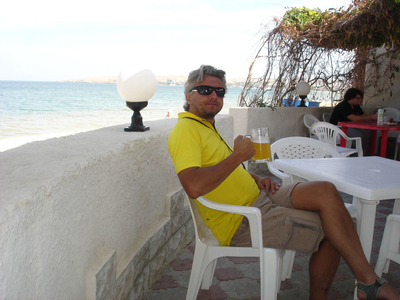 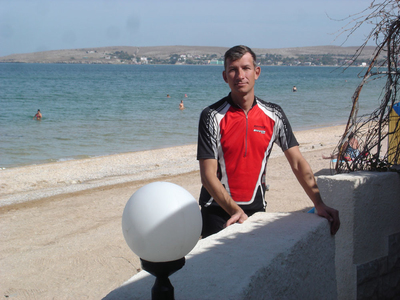 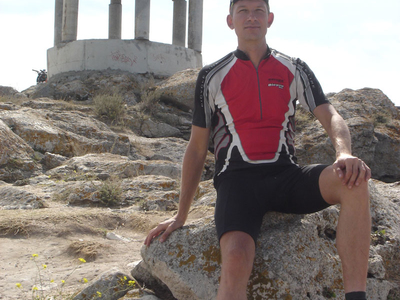 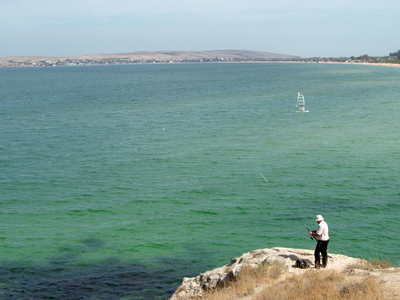 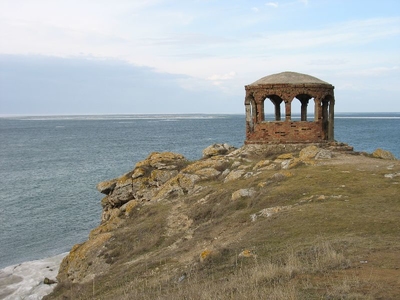 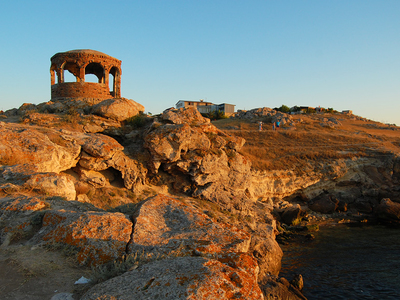 Shcholkine founded in October 1978 as the settlement of builders of the Crimean nuclear power plant. Named in honor of Cyril Selkina, Soviet nuclear physicist, corresponding member of the USSR Academy of Sciences.

In 1987, the construction almost stopped, and officially frozen in 1989 in the stage of 80 % completion due to the fact that the building site was recognized as geologically unstable.

The village was abandoned until the early 2000s, eked out a miserable existence. Now there is developing resort infrastructure.

I don't know how, but I love it. Quiet and not hectic. Here is a little sad - because all the environment as a silent reminder of the once powerful country, with its science and technology.

One of the few attractions of the city - a gazebo Valentina Tereshkova. Or rather she wasn't. Is the garden where he loved to rest the first Russian astronaut - collapsed in 2009.

This arbor was built in 1972 during the filming of "King Lear" Director of boarding house "Riga" , almostkey under which we Kuzmin warmed our old bones, not realizing that in this place when it was a manor of the ancient Greek philosopher Aristobulus.

As the founder of pansonate of Regency Nora Bultmann and her niece Ella Wilkes (nee also Bultmann) are the direct descendants of this philosopher.

In 2000, the boarding house has acquired a successful enterpreneuer Crimean, Caucasian Greek Malkhazi Arudou turned out to be
a descendant of the younger son of the philosopher Aradia, who was in kinship with Bultmann. 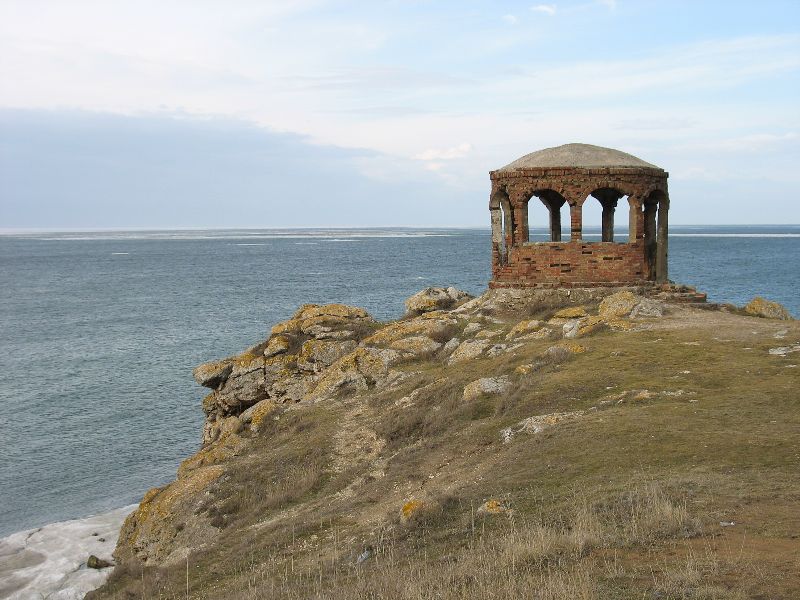 Now in its place is a concrete replica. Creepy and ugly. Inside as usual naporano and Napoletano. Culture-Cho!

But the view from the Cape of good swings both ways.

I can't stand this part of the way - from Shelkino to Feodosiya. Through the isthmus of Kerch Peninsula. Through the scuzzy poselok Lenine and M5 Kerch-Feodosia. The most boring road on the pavement with a length of 40-50 kilometers.

Our attempt to diversify has led to the arduous drive through the village to the outskirts past the piles of garbage thrown by the residents .

Kuzmin, as usual, went ahead, and I'm sweating and tried pushing on the pedals again and indulged in gloomy thoughts about your age. Sand that was not there , and went barely barely.

In the end it's still life we got tired and we went back to the asphalt. After the bridge over Crimean canal I opened the camera and changing it finally found the cause of heavy pedaling.

Age again has nothing to do with it - burst spring rear brakes and pads clamped rim. I have a few kilometers of driving overcoming this inhibition))) Andrew has kindly offered me a piece of rope so I tied up the brake levers. All the way to Feodosiya was traveling only with forward. Not very convenient as it turned out.

When we approached Promorskoye the village before Theodosius Andrew also slashed camerasfrom. In Crimea is full of small thorns, the wheel pulls them pierced not quickly, but to find microderma extremely difficult.

It happened near the tire. I would never think to associate it with problem camera, but Kuzmin as notorious motorist immediately went there. Birds of a feather as they say.... He just wanted to ask a little drop of glue from colleagues. But I left it discouraged. Fellow glue isn't in a hurry, and grabbed him a certain amount of hohlobaksy. I had to give. Well at least pumped for free. But his face contorted. 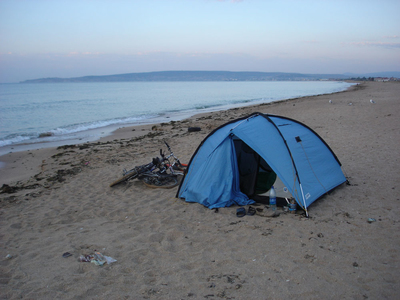 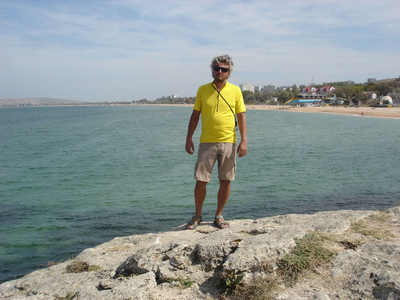 Faith in the automobile fraternity was shaken. Affected in their best feelings for a long time and swore in his peculiar manner on the wrong autokeynav.

It was decided to spend the night as always on the beach between Seaside and Feodosia.

Elegant dinner with salad and cognac Koktebel as it brightened the discomfort from a less-than-lovely tyre.